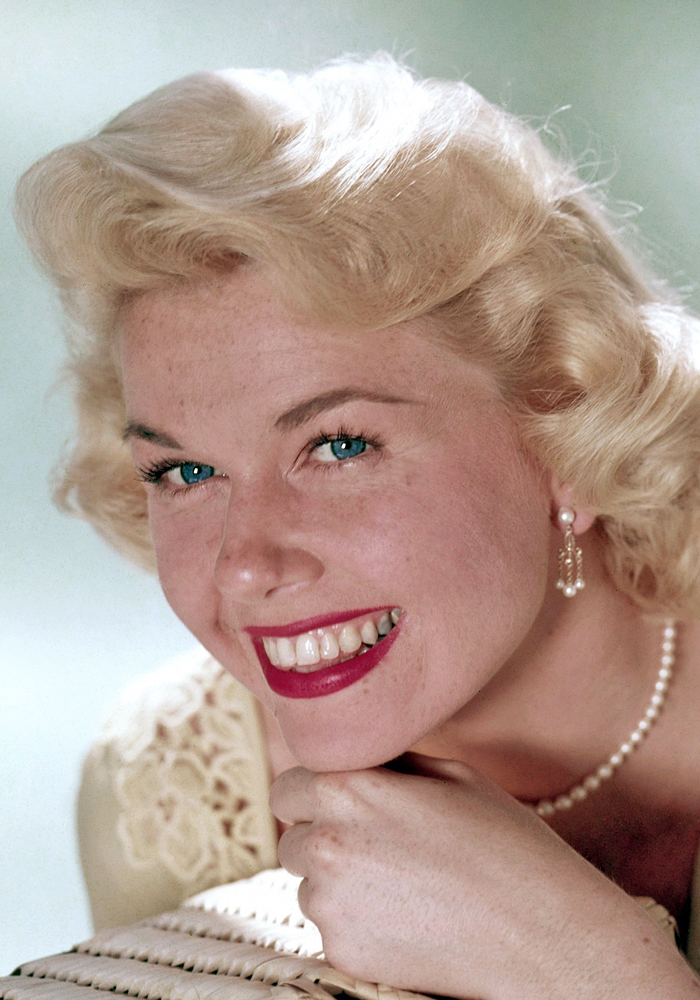 One of our greatest stars, Doris Day, recently celebrated her 90th birthday. Day made a rare public appearance for the occasion, delighting not only fans present to see her in person, but those of us who were happy to see smiling new photos of the beloved singer-actress.

Day was the biggest female box office star in history, but she's has been off the screen for four decades, At this year's TCM Classic Film Festival, TCM staffers shared that Doris is Number One on their wish-list for a future festival appearance.  TCM has been cultivating a relationship with Day for years, leading to events such as her recent audio interview with Robert Osborne. The folks at TCM say Day seems to have no idea just how greatly she is loved and admired.  Perhaps one day TCM will be able to lure Day from her home in Carmel to the festival so some of us can express to her just how much she means to us.

Day, born in Cincinnati in 1924, was an unlikely movie star. A successful big band singer, she was so ambivalent about a screen test that, when asked if she'd like to be an actress, she replied to director Michael Curtiz 'Oh, I suppose. I guess it might be interesting.' As recounted in Tom Santopietro's fine book Considering Doris Day, despite having no experience and simultaneously dealing with the stress of a collapsed marriage, Day sailed through her screen test, finding the ins and outs of filming effortless. Santopietro quotes Day as saying she 'felt a nice exhilaration' when she heard 'Action!'

Composer Sammy Cahn said when he saw Day's screen test, 'The screen just exploded...a great star was born.' Indeed, Day was a fully formed movie star from the very start of her screen career, starring in the leading role in Romance on the High Seas (1948), and she continued to delight movie audiences for two decades. Off the screen her personal life was turbulent at times, but onscreen she was pure movie sunshine.

When Day's eponymous TV series ended in 1973, roughly a quarter of a century after her film debut, she retired from the screen and has since devoted herself to protecting animals.

When it comes to Doris Day's filmography, the challenge is not in deciding which films to recommend, but which titles to leave out! She could truly do it all: musicals, comedy, and highly dramatic roles. Below are a baker's dozen of favorite Day titles showcasing the breadth of her talent. Day appeared in many more films which are also worth seeing.

Romance on the High Seas (1948) - Day's character, Georgia, is a brash and sassy singer in low-budget clubs who dreams of travel. About 40 minutes into the film, however, Day quietly launches into singing the Oscar-nominated 'It's Magic,' and a star is born.

My Dream Is Yours (1949) - Day is lovely and very 'real' as a young widow and mother determined to succeed as a singer. The film also has an attractive color palette, a nice low-key performance by Jack Carson, and an Easter sequence featuring Bugs Bunny.

On Moonlight Bay (1951) and its sequel By the Light of the Silvery Moon (1953) are very enjoyable films inspired by Booth Tarkington stories. Day plays tomboy Marjorie Winfield, who lives with her parents (Leon Ames and Rosemary DeCamp), little brother (Billy Gray), and housekeeper (Mary Wickes), then falls in love with the boy next door (Gordon MacRae). These films, with an early 20th century Meet Me in St. Louis vibe, are great family entertainment.

Calamity Jane (1953) - One of Doris Day's very best musicals, she shines in the high-energy title role, singing great songs like 'Deadwood Stage' and 'Just Blew in From the Windy City,' and performing a duet with Howard Keel (as Wild Bill Hickock) in 'I Can Do Without You.' Best of all is the Oscar-winning 'Secret Love.'

Young at Heart (1954) - This loose remake of Four Daughters cut the number of daughters down to three -- Doris, Dorothy Malone, and Elisabeth Fraser -- but the film is especially notable for the onscreen teaming of two of the greatest vocalists of the 20th century, Day and Frank Sinatra. The movie may not be one of the best of Day's career, but it's absorbing, and the teaming of Day and Sinatra makes it must-see viewing.

Love Me or Leave Me (1955) - One of Day's greatest performances, she plays singer Ruth Etting, who has a turbulent marriage with gangster Marty Snyder (James Cagney). Day and Cagney are dynamite together.

Julie (1956) - This melodrama has Doris in the title role, determined to escape from her psycho husband (Louis Jourdan) and return to a quiet life as an airline stewardess. Sure, it's a little hokey, but Doris totally sells the great final scene where she has to land a passenger plane. Just plain fun.

The Man Who Knew Too Much (1956) - Day starred with James Stewart in this Alfred Hitchcock film, which provided her with an intense dramatic role as the mother of a kidnapped child. Despite it being a suspense film, Day introduced another Oscar-winning song in this, 'Que Sera, Sera.'

The Pajama Game (1957) - Another of Day's best musicals, in which she plays a union worker at a factory who falls in love with her manager (John Raitt) just as a strike is in the offing. Great performances, score, and widescreen photography; a must for Doris Day fans.

Teacher's Pet (1958) - This excellent comedy has an intelligent, Oscar-nominated script and terrific performances from Doris, Clark Gable, and Oscar-nominated Gig Young. An old-school newspaper editor (Gable) clashes with a journalism professor (Day) in a film which remains surprisingly relevant today as newspaper employees struggle to compete with the immediacy of TV and radio news coverage. Day's knack for comedy is especially evident in the dazed moments after Gable first kisses her, as she struggles to remain upright.


Pillow Talk 1959) - The first and best known of the slightly racy romantic comedies Doris made with Rock Hudson, it continues to amuse and entertain today. The bright screenplay won the Oscar, and Doris received her one and only Best Actress nomination for this film.

The Thrill of It All (1963) - Day is deliciously teamed with James Garner in this entertaining tale of a doctor's wife who becomes a TV star selling laundry soap. Day and Garner have wonderful chemistry, and many viewers fondly recall the famous scene in which Garner inadvertently drives into a brand-new swimming pool; a must for those who love Day in comedies.