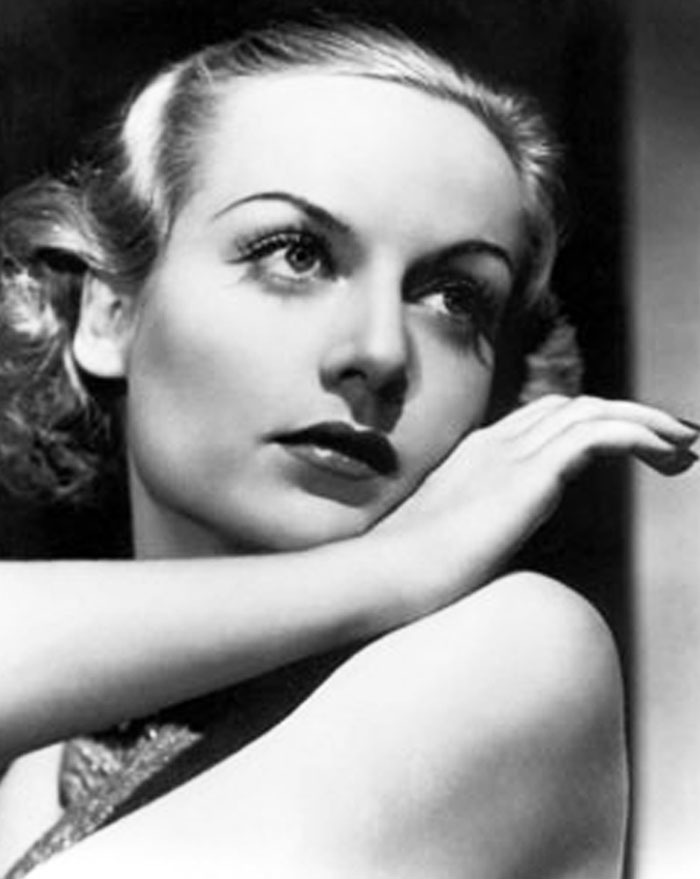 Lombard was on a highly successful war bonds drive just weeks after Pearl Harbor when her plane crashed outside Las Vegas, Nevada, killing all 22 people on board. Details of Lombard's life and the ill-fated flight have been chronicled in Robert Matzen's outstanding new book Fireball.

On the flight's anniversary I attended a lecture by Matzen on TWA Flight 3 at the Museum of Flying in Santa Monica, as chronicled at my personal blog.

As I considered Carole Lombard's sudden death and how much Hollywood lost with her passing, my thoughts inevitably turned to the start of her life, when she was little Jane Peters of Fort Wayne, Indiana. Which, in turn, caused me to recall an exciting experience I had as a college student, when I discovered unidentified photos of little Jane, the movie-star-to-be.

An interesting bit of trivia unknown to many Lombard fans is she was related to the Kimberly family, co-founders of the Kimberly-Clark company, established in the 19th century and still in existence today.

Like many wealthy and not-so-wealthy families, the Kimberlys were lured by California's balmy weather and relocated from Neenah, Wisconsin to Redlands, California in 1905; they purchased a mansion which had been built a few years previously and named it Kimberly Crest.

I came into the story as a history major at the University of Redlands in the mid '80s, when I had a senior year internship cataloging and preserve photos at the Kimberly Crest mansion. A classic film fan even then, I was immediately interested when the curator told me Carole Lombard was a relative.

In those pre-Internet days when facts and photos were harder to come by, I fortunately owned two reference books on Lombard which had photos of her as a child. I studied them carefully so I would have an idea of what she looked like before I began my semester's work.

On the first day of my internship, I hardly knew where to begin. I flipped through scores of photos, trying to assess what I'd be working with that semester, and then I came to a photo of two little girls labeled simply 'Christmas 1919.'

I knew immediately I'd struck pay dirt; there was simply no mistaking the beautiful eyes of the little girl standing on the right in the photo. Carole Lombard, then known as Jane Peters, would have been 11 years old.

The curator was a bit thunderstruck I'd found the photo within a couple hours of going to work, but fortunately family patriarch J.A. Kimberly kept diaries. The pages for Christmastime of 1919 immediately verified my find. Mr. Kimberly referenced a Christmas visit by 'Totsie and Jane.' It was known from other references that Totsie was a family nickname for Jane's mother, Elizabeth 'Bessie' Peters. The Peters family had moved to California in the mid-teens after Jane's parents divorced.

I later discovered three additional photos of Jane, aka Carole. The finds, which verified longtime local rumors that Lombard had spent time with the Kimberlys as a child, caused something of a splash in Redlands, resulting in local newspaper stories and eventually even a segment of the PBS series On Campus.

Just a couple of years after her Christmas visit to Redlands, Jane began working in silent films, first under the name Carol Lombard, then adding an 'e' a few years later and becoming Carole.

Equally adept at comedy and drama, Carole ultimately received over 75 film credits and become one of Hollywood's greatest stars. In her personal life, there was a short-lived marriage to William Powell -- who remained a friend and made My Man Godfrey (1936) with her after their divorce -- and then, famously, her marriage to the 'King' of Hollywood, Clark Gable.

Though her early death robbed us all of the performances which were never to be, Carole Lombard left behind a fine body of work with a number of inspired, memorable performances. Here are a few favorites which are available on DVD:

No Man of Her Own (1932) - Sparks fly in this pre-Code starring Lombard and the man she would one day marry, Clark Gable. Gable plays a card sharp who meets Lombard, a small town librarian, and decides he might like to reform if she's part of his future. It's cinema's loss this pair never worked together on film again, as their chemistry is electric.

Twentieth Century (1934) - This was a transitional film for Lombard as she moved from pre-Code dramatic heroine to screwball comedy star. She plays an actress contending with a crazy director (John Barrymore) in this, at times, frenetic Howard Hawks comedy.

Hands Across the Table (1935) - The first of four films Lombard made with Fred MacMurray, this Depression tale directed by Mitchell Leisen is the story of a manicurist (Lombard) and a playboy (MacMurray) whose family lost its money in the crash. They each want to marry to increase their fortunes -- Lombard has a likely prospect in wheelchair-bound Ralph Bellamy -- but fortunately, or unfortunately, they fall in love. At times, the tone of this ostensible comedy turns quite dark; in contrast, a late-night love scene between MacMurray and Lombard is filled with romantic longing and is superbly acted. MacMurray and Lombard were an excellent screen team.

Love Before Breakfast (1936) - In this giddy film, business magnate Scott (Preston Foster) won't take no for an answer when he pursues beautiful Kay (Lombard), who's just become engaged to Bill (Cesar Romero). Kay resists so long that one starts wondering what Scott sees in her, even if she is beautiful -- but she is Carole Lombard, with her unique combination of daffiness and vulnerability, and that's reason enough for Preston Foster to stalk her until she says yes!

The Princess Comes Across (1936) - Band leader King Mantell (Fred MacMurray) falls for Swedish Princess Olga (Lombard) during a transatlantic crossing, but the Princess isn't exactly what she seems... Part screwball comedy and part murder mystery, with a little concertina music on the side! A very enjoyable film.

My Man Godfrey (1936) - Possibly the best Lombard film of them all, and certainly my favorite, Carole stars as dizzy Irene Bullock, who hires a hobo (William Powell) to be the family butler during the midst of a scavenger hunt. This film encapsulates what Carole Lombard was all about: utterly crazy and utterly gorgeous. Who can forget her reaction when Godfrey puts her in a cold shower? 'Godfrey loves me, Godfrey loves me!'

Nothing Sacred (1937) - Directed by William Wellman, Lombard plays Hazel Flagg, who believes she is dying and is exploited by newsman Wally Cook (Fredric March), who makes her a media darling. The storyline about media manipulation and 'stardom' remains highly relevant today.

In Name Only (1939) - One of the best soapers ever made, this moving drama stars Lombard as a young widow with a little girl who falls in love with Alec (Cary Grant) -- who is married 'in name only' to the venomous Maida (Kay Francis). A terrific trio of stars in a wonderfully absorbing movie with a most satisfying conclusion.

Mr. and Mrs. Smith (1941) - This comedy, directed by Alfred Hitchcock, is one I've come to appreciate more on repeat viewings over the years. Lombard and co-star Robert Montgomery manage to go beyond the script and convey some very interesting steamy undercurrents in this tale of a couple who learn their marriage isn't valid.

To Be or Not to Be (1942) - This film gives My Man Godfrey a run for its money as Lombard's greatest performance. She plays Polish actress Maria Tura in Ernst Lubitsch's dazzling dark comedy, which finds a troop of ham actors matching wits against the Nazis. A brilliant swan song by a remarkable actress.