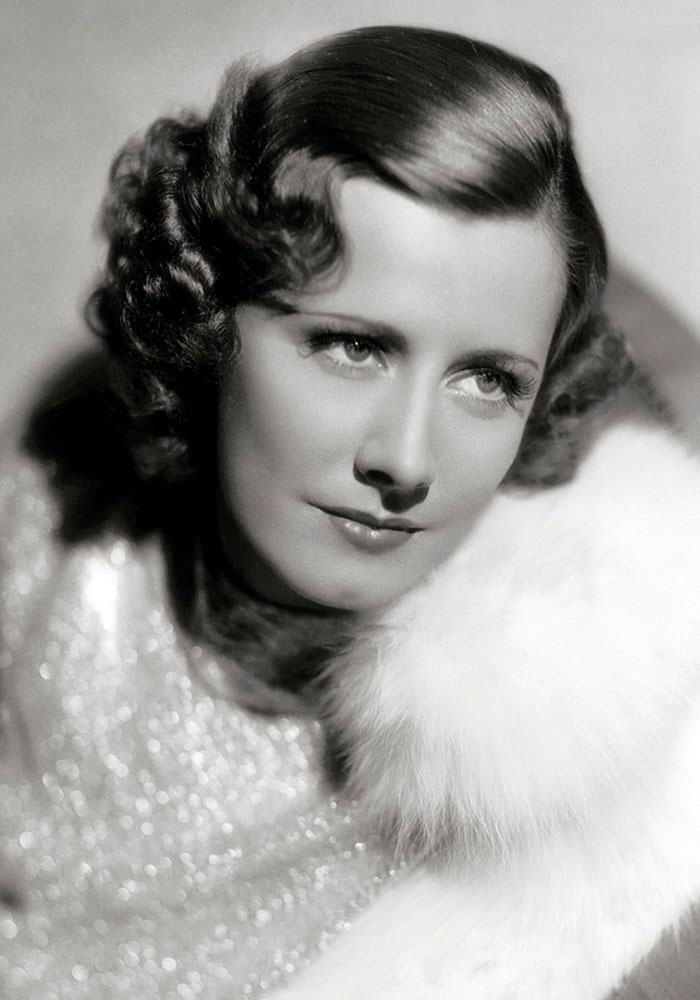 One of my earliest memories of Irene Dunne was of her singing Jerome Kern's 'The Folks Who Live on the Hill' in a revival house screening of High, Wide, and Handsome (1937) when I was growing up. That enchanted scene lingered in memory for decades and was a part of my falling in love with the 'silver screen' in general and Irene Dunne in particular.

Irene Dunne was without question one of the most talented actresses of the 'Classic Hollywood' era, and yet she never won an Academy Award. A five-time Oscar nominee who sang and was equally adept at comedy or drama, Dunne starred in countless classics. In 1985, her many accomplishments were recognized when she was named a Kennedy Center honoree.

Dunne might also have set an unusual record, for appearing in the highest number of films which were remade. Remarkably, at least 10 of her films were later remade: Cimarron, Back Street, Magnificent Obsession, Roberta, Show Boat, The Awful Truth, Love Affair, My Favorite Wife, A Guy Named Joe, and Anna and the King of Siam.

Some have speculated that so many of Dunne's films being remade might have overshadowed her reputation somewhat; though beloved by discerning classic film fans, she does not seem to have the same name recognition today as some of her peers. Thanks to DVD and Turner Classic Movies, modern audiences can acquaint themselves with the original versions of many wonderful films, starring a marvelous and remarkably gifted actress.

Irene Dunne was born in Kentucky on December 20, 1898. She came of age in Madison, Indiana, and initially envisioned a career as a public school music teacher. Instead, after completing her musical education, she decided to try for a career performing in New York. Her audition for the Metropolitan Opera was turned down, but she quickly found a home in Broadway musicals, appearing in several productions throughout the 1920s.

In 1930, Hollywood beckoned. Irene played lead roles from her very first picture; her second film, the Western epic Cimarron (1931), won Best Picture and netted Irene the first of her many Best Actress nominations. Over the course of her career Irene also starred in a diverse mixture of romances, screwball comedies, historical dramas, family films, and musicals.

After It Only Grows on Trees (1952), Irene retired from the big screen at the age of 54. She made sporadic television appearances through the early '60s, then quit performing altogether. She once told an interviewer 'Acting is not everything. Living is.'

In her retirement Dunne devoted herself to family, charity work, and politics, not to mention rooting for the Los Angeles Dodgers, forever living up to her credo. She also gained a special place in Disney history, as the former Show Boat star was invited by Walt Disney to christen the Mark Twain paddlewheeler on Disneyland's opening day, July 17, 1955.

Dunne's political activities included an appointment by President Eisenhower as an alternate delegate to the United Nations, and she was also appointed to serve on a California arts commission by Governor Ronald Reagan.

Irene had married a dentist a dozen years her senior, Dr. Francis Griffin, in 1928; after Irene went to Hollywood they had a bicoastal marriage until 1936, when he and Irene decided it looked like she would have a longtime career in 'pictures' and it was time to live on the same coast. He closed his practice and relocated to California, and that year the Griffins adopted a daughter, Mary Frances. Dr. Griffin managed the family's investments with care, leaving his wife a comfortably wealthy woman when he passed on in 1965.

Irene Dunne survived her husband by a quarter century, dying in Los Angeles on September 4, 1990. She was 91.

A fine biography of Dunne was published in 2003, Irene Dunne: First Lady of Hollywood, by Wes Gehring, a professor at Ball State University.

Here are a dozen Irene Dunne films available on DVD showcasing the breadth and depth of her abilities. They provide many hours of viewing enjoyment. She was in many more good films so don't stop with just this list!

Cimarron (1931) - In her second film Dunne starred opposite Richard Dix in this Edna Ferber tale about the settling of Oklahoma. She received the first of five Best Actress nominations for her portrayal of Sabra Cravat, a pioneer wife.

Roberta (1935) - Dunne played the lead in this film which is best known today as one of Fred Astaire and Ginger Rogers' many co-starring films. Randolph Scott also stars. Irene sang the Kern standards 'Smoke Gets In Your Eyes' and 'Yesterdays.'

Show Boat (1936) - Dunne had her best movie musical role in this Kern-Hammerstein classic, starring as Magnolia Hawks and singing classic songs such as 'Make Believe' and 'You Are Love.' Like Cimarron, Show Boat was based on a novel by Edna Ferber.

Theodora Goes Wild (1936) - Dunne received her second Oscar nomination playing the title role in this comedy where she plays a woman from a strait-laced small town who has a secret life as the author of scandalous books. Illustrator Michael Grant (Melvyn Douglas) wants to help Theodora break out of her public conformist shell...but then it turns out Michael is also strongly constrained by convention, and Theodora goes wild in order to free Michael.

The Awful Truth (1937) - Another Best Actress Oscar nomination for another classic comedy, directed by Leo McCarey and co-starring Cary Grant. They play a couple who decide to divorce but regret it (of course) and must find their way back to one another. Grant and Dunne were a marvelous team. Grant was quoted on Dunne's lack of an Oscar win: 'She was so good -- her timing was so marvelous -- that she made comedy look easy. If she'd made it look as difficult as it really is, she'd have won.'

Love Affair (1939) - Dunne's fourth Oscar nomination was for a completely different style of film, a moving, emotional romantic drama opposite Charles Boyer. This might be the most loved of all her films. Curiously enough, the '50s remake starred her friend and perfect film partner, Cary Grant.

My Favorite Wife (1940) - One of Dunne's best films, in which she plays Cary Grant's presumed-dead wife who returns after having been marooned on an island with Randolph Scott. This is a good place to mention that in addition to being a fine singer, Dunne had a voice which somehow seemed made for comedy -- her charming vocal inflections are funny in and of themselves.

Penny Serenade (1941) - Dunne and Grant are superb in their third and final film, a heartfelt drama telling the story of a couple's marital struggles and attempt to start a family. One gets a real sense of their acting range contrasting their performances in this film with the comedies they previously made together.

Together Again (1944) - A personal favorite of mine, reuniting Dunne with her Love Affair co-star, Charles Boyer. There are echoes of Theodora Goes Wild as Dunne plays a widowed small town mayor thoughtfully parenting a dramatically inclined stepdaughter (Mona Freeman). Dunne's life is turned upside down when she's wooed by a charming sculptor (Boyer).

Anna and the King of Siam (1946) - Years before Rodgers and Hammerstein wrote The King and I, Dunne starred as 'Mrs. Anna' in a dramatic version of the Margaret Landon book. Ironically, Dunne and co-star Rex Harrison could have done a fine job in the musical version!

Life With Father (1947) - Dunne and William Powell are perfectly matched as the parents of a brood of four children. Powell's father thinks he's in charge of the family, but he's putty in the hands of his wife.

I Remember Mama (1948) - Dunne received her final Oscar nomination for this film, one of her very best performances. In this filming of Kathryn Forbes' book she plays a Norwegian immigrant raising several children in early 20th Century San Francisco. The film revealed another talent, her facility with an accent! More than that, it's a heartwarming drama and a very memorable performance in every way.