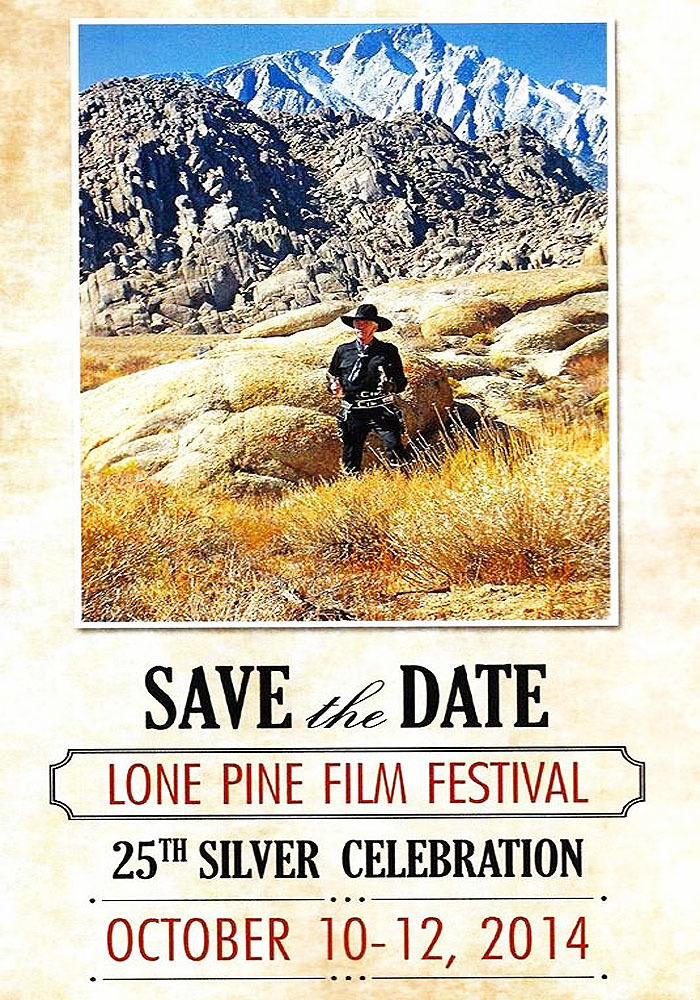 The 25th Lone Pine Film Festival took place in Lone Pine, California, in early October, providing film fans with a very special time in an area where hundreds of classic-era movies were filmed.

Although I've been to the charming little Sierra town of Lone Pine on many occasions, this was my first visit to the festival, and I can't underline enough what a good time I had. Anyone who loves classic films, especially Westerns, will want to put the Lone Pine Film Festival on their 'must-do' list.

The Lone Pine Film Festival is a mixture of movie screenings, filmmaker interviews and lectures, location tours, book signings, and meet-and-greets. What distinguishes the festival is its intimacy and historic setting, taking place where so many movies were actually filmed. One of the special opportunities at the festival is the ability to watch a film and then hop on a bus to visit the locations just seen in the movie.

This year there were screenings and corresponding tours of Gunga Din (1939) and Bad Day at Black Rock (1955), as well as Tim Holt's Dynamite Pass (1950). Several more general location tours focused on various areas around Lone Pine; I was especially thrilled to see 'Soda City,' an old dolomite mine site on the road to Death Valley just outside of Lone Pine, from Alfred Hitchcock's Saboteur (1942).

The festival's special guests are very accessible throughout the weekend at the festival's main venues, the Lone Pine Film History Museum, the Lone Pine High School Auditorium and Quad located across the street from the museum, and 'The Building,' the community center where the guests can often be found in between their appearances.

This year's guests included Bruce Boxleitner, who was honored with a screening of his 1976 TV-movie The Macahans, co-starring James Arness; that might have been the only Western screened which wasn't shot in Lone Pine! As with most of the other guests, anyone who wished to speak with Boxleitner during the festival had ample opportunity to do so.

My time at the festival started with an opening night gala on Thursday, providing festival attendees such as myself the chance to mingle with the featured guests. Bruce Boxleitner shared a story with me that he almost had the chance to work with the great Western director Budd Boetticher, as Clint Eastwood arranged financing for a film to bring the director out of retirement, but ultimately the movie wasn't made, to Boxleitner's regret.

Friday morning I was in the high school auditorium bright and early for a 7:00 a.m. screening of Tim Holt in Dynamite Pass (1950), costarring Richard 'Chito' Martin, Regis Toomey, Lynne Roberts, and John Dehner. It was heartwarming how many fans of Tim and Chito came out to watch them so early! As soon as the movie was over we were taken by bus out to the Alabama Hills, where we spent roughly three hours walking around and photographing the locations for pretty much every outdoor scene in the movie. Some of us wondered what Tim and the company would have thought if they could have known how interested film fans would be in retracing their steps six decades later.

Back in town I met Johnny Crawford, an absolutely lovely gentleman, and had the chance to tell him that The Rifleman was a happy part of my childhood. After lunch it was time for another tour; the 'Backlot Tour' was a three-hour car caravan tour which took us to several interesting places, including 'Hoppy's Cabin' from the Hopalong Cassidy films (it's still lived in today!), the decaying 'Tim Holt Cabin' which appeared in many RKO Westerns (the museum hopes to acquire it), and the aforementioned Soda City. Also on the road to Death Valley were locations for I Died a Thousand Times (1955), which starred Jack Palance, and the silent classic Greed (1924).

The 300-seat auditorium was close to full that evening for the screening of Gunga Din. Ben Burtt and Craig Barron did a terrific job with an hour-long presentation sharing a vast amount of information on the making of the film afterwards, including the Lone Pine locations and special effects shots. They also shared color home movies shot on location in Lone Pine by Cary Grant, Douglas Fairbanks Jr., and director George Stevens. I especially enjoyed the look at how the rope bridge was created in the Alabama Hills; it was real but much closer to the ground than it appears in the movie!

When filming of Gunga Din was completed some of the lumber was recycled into permanent Western sets built at nearby Anchor Ranch. We've heard that remnants of the giant Gunga Din sets can still be found in the hills today! There is also a plaque in the hills, mounted on dolomite, marking the site of the movie's filming. The plaque was dedicated by Fairbanks in 1992.

The next day we toured Anchor Ranch; the Western street set and hacienda appearing in many films have long since been torn down, decaying due to the harsh weather and lack of maintenance, but we stood where they had once been, thinking of Tim Holt and all the other Western actors who had once worked there.

Saturday also included wonderful talks by William Wellman Jr. and Edward Faulkner. Faulkner had appeared in small roles in half a dozen John Wayne films and spent an hour giving an extemporaneous speech on working with 'the Duke,' who he says was unfailingly thoughtful.

There were many more overlapping events taking place at the festival we would have loved to attend. There is a lot to do; my husband even arranged a three-hour horseback ride through the storied Alabama Hills with a local company.

Lone Pine is a very small town; Main Street can be walked end to end in a matter of minutes, and the festival venues are thus all within easy walking distance of one another, including the historic Dow Villa Motel, where many festival attendees stay.

In fact, if you stay at the Dow, you are pretty much guaranteed to also run into the festival's featured guests in the parking lot on a daily basis! This all combines to give the festival a very congenial and personal atmosphere.

The 2015 Lone Pine Film Festival will be held October 9th through 11th, with a focus on silent Westerns, especially Tom Mix. Live music will accompany some silent movie screenings. We had such a good time this year we plan to return to the festival and are already on a sign-up list for a room at the Dow next year. Early hotel reservations in town are recommended as they do tend to sell out.

I highly recommend this festival to all classic film fans. I believe I can guarantee a really wonderful experience!