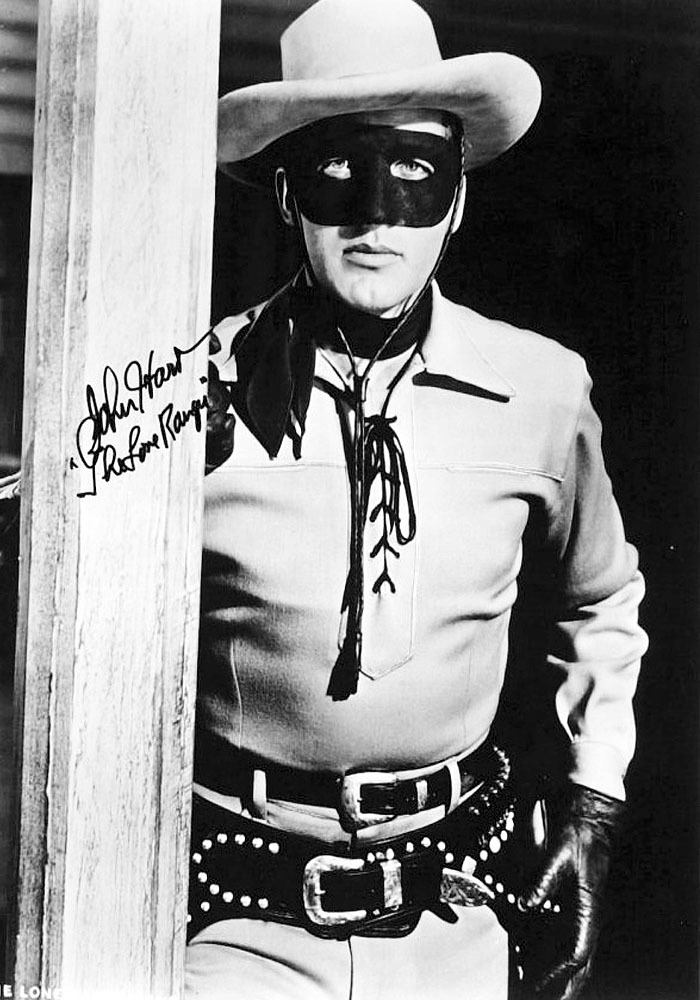 The Old Corral: The Lone Ranger in 'The Ghost of Coyote Canyon'

The Lone Ranger was ABC's top-rated show throughout its original run, and the network's first big success of the 1950s. Of course, the character had been around since his radio debut in 1933, created by George Trendle and Frank Striker. And while the show, novels, comics and movie serials were big hits, it was the TV show, starring Clayton Moore and Jay Silverheels, became a true phenomenon.

For many of us, Clayton Moore is the Lone Ranger, the same way Sean Connery is James Bond. On TV, in two movies, and at events like car dealership openings all over the country, for decades Moore personified the Ranger and his moral code. He saw it as a responsibility, even though it labeled a nut job by some. (Read his wonderful autobiography, I Was That Masked Man, sometime.)

But that dedication to the role came later. In the early 50s, it was just another part for Moore -- a good guy after years of playing mostly heavies. He was paired with Jay Silverheels as Tonto, his faithful Indian companion, and they returned to those thrilling days of yesteryear for two highly-successful seasons, riding and shooting their way through Lone Pine and Kanab, and the Iverson, Spahn, Melody and Jack Ingram movie ranches.

Then, came season three and the introduction of some other guy behind the mask, John Hart.

So what happened to Clayton Moore? Well, the story usually heard is there was a salary dispute. Moore asked for more money and was replaced. To the end of his days, Moore denied that's what happened; claiming he never knew why they decided to get someone else. (He probably would've been better off with a piece of the merchandising anyway.)

John Hart wore the mask and rode Silver for 52 episodes. Jay Silverheels was still Tonto, and the work was still hard.

John Hart: 'We worked six days a week, every other week. We worked Monday through Saturday. The scripts ran 30-some pages...We shot every (episode) in two days.'

Hart appeared in a couple episodes as a bad guy, so the producers were familiar with him. 'I don't know how many other actors they looked at, but I got the part.'

One of the John Hart episodes, 'The Ghost of Coyote Canyon,' aired on August 6, 1953. ABC should've held it back till October; it was one of the last of the season, and perfect for Halloween.

A gang of outlaws has convinced the good people of Crooked Fork that a ghost haunts nearby Coyote Canyon. One of the townspeople, Ed (the great Hank Worden), describes it as 'a horrible critter with a face like the devil himself...I got out of there so fast, it was two miles before my skin caught up with me.'

The outlaws use the fake ghost, which looks more like one of those folk art ceramic face jugs, to keep folks from discovering their hideout and all the loot they've hidden there. (It's a cabin set that turns up in many of these shows.) One of the crooks, Crazy Joe, occupies the canyon along with his pet raccoon and the flunky who puts on the mask and, armed with a bow and arrow, goes out to scare people off.

The Lone Ranger and Tonto, friends of Crooked Fork's aging sheriff (Tom London), arrive to investigate. They don't believe in ghosts, neither does the sheriff, so they set out to expose the phony spirits, bring the criminals to justice and return the stolen goods to its rightful owners.

Tonto is knocked in the head and captured by Crazy Joe and the ghost, while the Lone Ranger gets a chance to don one of his many disguises, this time decked out as a Spanish 'ghost catcher.' He winds up with one of the gang's pistols pointed at him and admits, 'My accent's as false as the ghost in this canyon.'

Eventually, the Lone Ranger and Tonto get the jump on the crooks, the bandits are captured, and the ghost is exposed as a fake, all taking place in less than 30 minutes.

If 'The Ghost of Coyote Canyon' sounds like almost every episode of Scooby Doo you remember, it's because it is like almost every episode of Scooby Doo. ('That meddling masked man and his faithful Indian companion!') A crook using fake ghosts and monsters to conceal their wrong-doing was an old plot device long before the Lone Ranger got hold of it. And while adults may think they're doing children a service by having the spooks turn out to be just costumed crooks, most kids see it as a cop-out.

Heading into the next season, the rights to the Lone Ranger were sold, and Clayton Moore was offered the part again which he gladly accepted. Two more seasons (the last in color) and two feature films followed. John Hart became an almost instant trivia question: Who's the other actor, besides Clayton Moore, to play the Lone Ranger on TV?

Toby Roan watches a lot of cowboy movies. His blog, 50 Westerns from the 50's, proves that point.