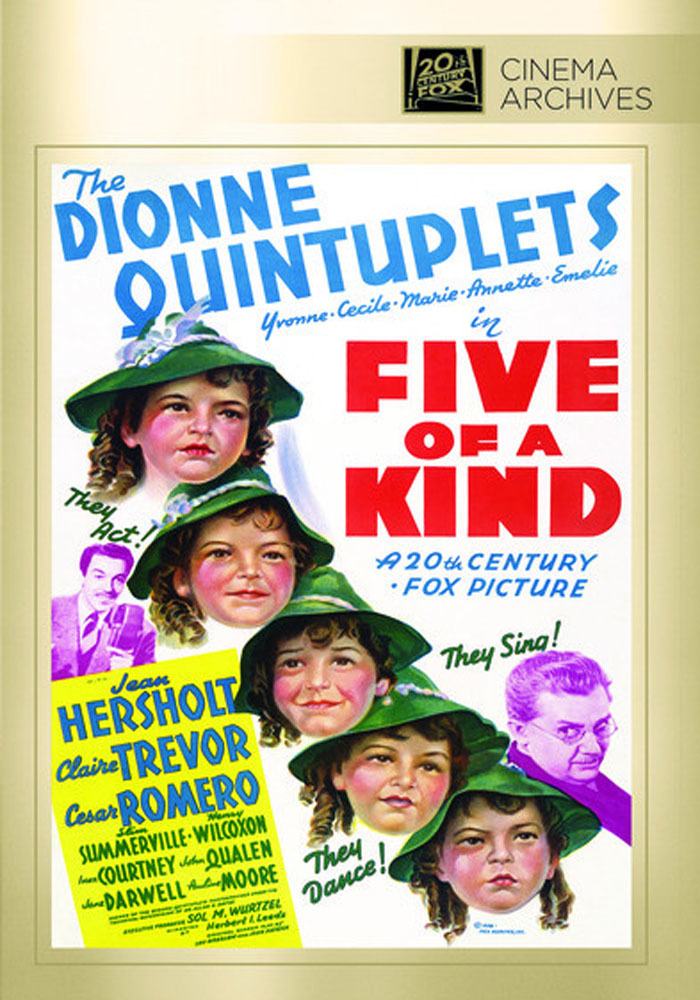 Five of a Kind: The Odd Life of the Dionne Quintuplets

If the Dionne quintuplets had been born today, they would have been reality television stars or a YouTube sensation. However, there's nothing in modern life that can compare to the sensation the girls created when they became the first recorded quintuplets to live beyond infancy.

Yvonne, Annette, Cecile, Emilie and Marie Dionne were born to poor farmer, Oliva-Edouard, and his wife Elzire in the village of Corbeil, Ontario, Canada in 1934. Arriving two months early, it was assumed none of the children of them would survive. It was only with the careful guidance of Dr. Allan Roy Dafoe, who also delivered the babies that all of them lived and thrived.

The Dionnes were already a struggling family with five older children. When the cash-strapped Oliva and Elzire considered allowing the babies to be displayed at Chicago's Century of Progress exhibit not long after their birth, the Canadian government stepped in and took over custody of the children, claiming concern about their exploitation.

Ironically, that same government exploited the quints quite thoroughly over the next nine years. The girls were made available for viewing most days, through a one-way glass in the lavish compound where they lived. A staff of nurses and Dr. Dafoe were their primary caregivers. Rather than being protected by their country, they became a commodity, making millions through viewings, products with their images, and advertising endorsements.

The quints' brief Hollywood career is yet another way their supposed caregivers made money off a fascinated public. In addition to a handful of shorts and newsreels, the girls appeared in three films. All featured Jean Hersholt as Dr. John Luke, a fictional stand-in for Dr. Dafoe, and the girls, though playing themselves and using their own first names, were called the Wyatt quintuplets. Their first film, The Country Doctor (1936), was a fictionalized version of their birth story. In Reunion (1936), they once again starred with Hersholt, though the official sequel to their debut was Five of a Kind two years later.

While Five of a Kind is not a flawless film, it is an interesting look at a different time that, in many ways, isn't very different at all. It is one of the many ways five Canadian sisters known as the Dionne quintuplets were packaged and marketed to a fascinated public. These girls were not only famous, but a tourist attraction, who, for a time, surpassed the number of visitors to Niagara Falls.

There were rigid guidelines for the filming of these movies: The girls were only available for one hour of work per day and they were filmed at the compound where they lived. Throughout each production, they were carefully monitored by Dr. Dafoe and his nurses.

These restrictions give Five of a Kind a weird, disjointed feel. The main storyline features Claire Trevor and Caesar Romero as cutthroat radio journalists in a game of one-upmanship. Their frantic and dull hijinks make up most of the film. While getting a radio exclusive with the quints is the key part of the plot, the quints never interact with Trevor and Romero; it is as if they are appearing in entirely different films.

Hersholt interacts with the girls, and while their scenes together can be unsettling (it is disturbing to see the girls handled like a charming zoo exhibit), they also have plenty of unrehearsed charm. While babbling in French, the quints rip off the doctor's glasses, destroy a radio microphone and, in a truly bizarre scene, pound away on five tiny baby grand pianos while dressed in lederhosen.

The contrast between the strained hilarity of the journalism plot and the quint's raucous play is significant. While not a single joke hits the mark in the scripted scenes, the girls are truly funny in a segment where they are each presented with a puppy. Their terrified, then curious, and finally loving reactions are real. As cute as they are, you can't help feeling a little guilty intruding on their childhood this way, though.

Five of a Kind is a jumbled, slow-moving curiosity. Actors like Trevor, Romero and Hersholt are always a pleasure to see, but it is painful watching them struggle with a truly absurd situation. The film takes on more gravity when approached with the knowledge of the quint's life story. It's worth watching for the experience and the realization that as horrendous as the Dionnes were treated, there's still a great deal of acceptance for that kind of exploitation of children today.

When the quints turned nine, their parents were finally able to retain custody of their daughters. The family lived together in a mansion in apparent ease, but the girls and their parents never built a strong bond. They would not maintain close contact with the family after leaving home at age eighteen. In later years, the three surviving quints also claimed to have endured abuse from their father.

The Dionne quintuplets led a troubled life, never able to recover from the indignities of their childhood. For all they endured, not to mention the money they earned for their government and family, they only received a trust fund of 00,000. In later years, they would try to stay out of the public eye, only emerging when they felt concern over children being exploited as they were.