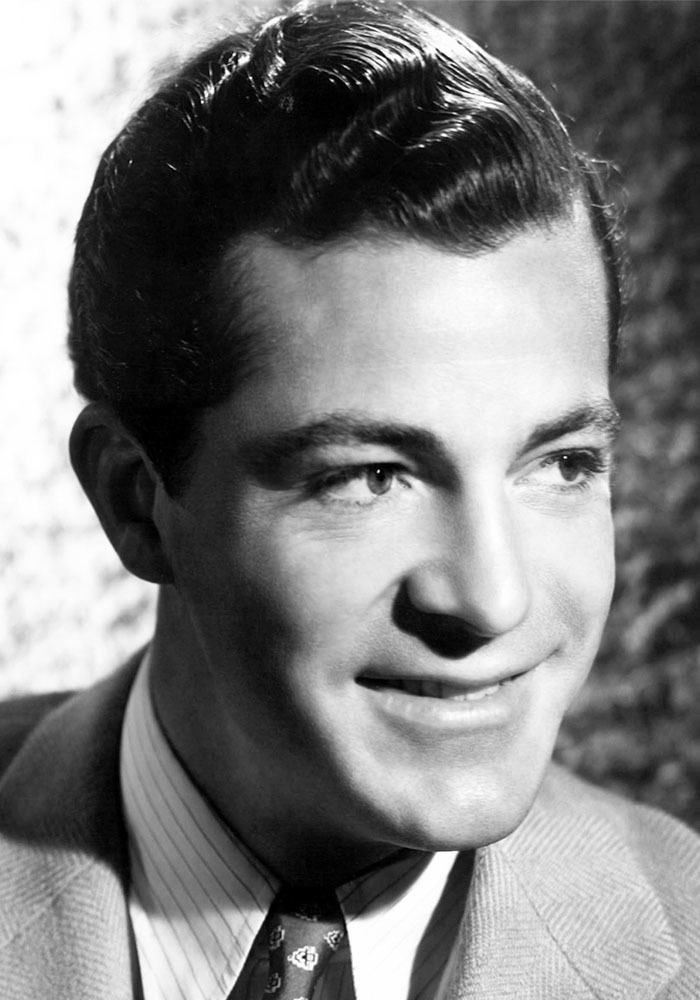 Dana Andrews was born Carver Dana Andrews on New Year's Day, 1909, in Mississippi. He was a preacher's son, one of a large family which would eventually include his little brother, actor Steve Forrest, who was born William Andrews when Dana was 16.

Dana came to California in the early '30s, intent on being an actor. He worked in a variety of jobs, and in the mid-'30s a pair of Van Nuys businessmen he knew took the unusual step of 'investing' in Dana, supporting him while he took acting and singing lessons and appeared at the Pasadena Playhouse.

In 1938 Dana landed a screen test with Samuel Goldwyn, which was a success, and he signed his first movie contract. He first appeared on-screen in 1940 and moved up through the acting ranks fairly quickly; within five years of signing his contract Dana had fully repaid his mentors, who he said saw a 300% return on the faith they had placed in him.

Goldwyn sold half of Dana's contract to 20th Century-Fox. His film credits for both studios include a number of excellent films, including enduring classics such as Laura (1944), State Fair (1945), and The Best Years of Our Lives (1946).

Throughout much of his career Dana struggled with alcoholism, and in retrospect it's somewhat remarkable he achieved such a durable career despite the problem; he also found time to serve as President of the Screen Actors Guild starting in 1963. When he achieved sobriety once and for all, he took the then-unusual step in 1972 of making public service announcements about drinking and driving for the Department of Transportation.

Dana's first marriage ended tragically in 1935, when his wife Janet died a few days after giving birth to a child which didn't live. She was just 27, leaving Dana to raise their young son. Four years later he wed Mary Todd, a union which would last until his death; he and Mary had three children. He spent his last years in an Alzheimer's facility in Los Alamitos, California, where he passed away on December 17, 1992.

A fine biography of Andrews by Carl Rollyson was published in 2012 by the University Press of Mississippi. It was written with the cooperation of the Andrews family and includes an impressive amount of primary source research.

Andrews' career includes many highly regarded films such as The Ox-Bow Incident (1943), The Purple Heart (1944), and A Walk in the Sun (1945). Indeed, his filmography of the '40s and early '50s, in particular, is so strong it's difficult to choose which titles to discuss! What follows is a list of a dozen personal recommended favorites starring Dana Andrews, all of which are available on DVD.

Crash Dive (1943) - A patriotic wartime film with Dana and Tyrone Power playing friends and romantic rivals for Anne Baxter filmed in gorgeous Fox Technicolor; it looks so great it could even be enjoyed with the sound off!

Wing and a Prayer (1944) - An engrossing war film set aboard an aircraft carrier, with Dana as a flight squadron leader who must deal with the stern flight commander (Don Ameche) on one hand and leading his men on the other.

Laura (1944) - The quintessential Dana Andrews role, playing an impassive detective who falls in love with the portrait of a murder victim (Gene Tierney). Every aspect of this film is perfection; classic Hollywood doesn't get any better than this. He reunited with Gene Tierney in The Iron Curtain (1948) and Where the Sidewalk Ends (1950).

State Fair (1945) - One of the truly charming films of the '40s, with an original Rodgers and Hammerstein score which produced the Oscar winner 'It Might As Well Be Spring.' Dana plays Pat, a newspaper reporter who falls for lovely young Margy Frake (Jeanne Crain) at the state fair. A little-known fact is Andrews had a trained singing voice, but he chose not to mention it to the studio; legend has it he figured the man dubbing him (Ben Gage) could use the work! Andrews worked with Crain again in Duel in the Jungle (1954), Madison Avenue (1962), and Hot Rods to Hell (1967).

Fallen Angel (1945) - One of the essential film noir titles of the '40s, in which Dana's wanderer lusts after Linda Darnell but marries Alice Faye for her money. A great film, shot partly on location in Orange, California.

Canyon Passage (1946) - This Western directed by Dana's friend Jacques Tourneur has justly grown in reputation in recent years, a beautifully staged observation of a frontier community in the Pacific Northwest, filmed in lush Technicolor with a marvelous cast including Susan Hayward, Brian Donlevy, and British actress Patricia Roc.

The Best Years of Our Lives (1946) - One of the key films of its decade, this look at the transition of three veterans into postwar life won multiple Oscars, including Best Picture. Dana's scene in a plane graveyard is one of the greatest moments.

Boomerang! (1947) - A very interesting 'docu-noir' directed by Elia Kazan. Filmed on location in Connecticut Andrews plays a state prosecutor under political pressure to prosecute a suspect in the murder of an Episcopal priest. In adhering to the prosecutor's duty to seek justice, rather than a conviction, Andrews' character up-ends a community.

The Frogmen (1951) - An exciting film about conflict amidst the members of a WWII underwater demolition team, with Andrews clashing with the 'by the book' attitude of his new commanding officer (Richard Widmark). Both actors are excellent as two talented but edgy men with difficult jobs.

Zero Hour! (1957) - Dana reunited with his Fallen Angel co-star, Linda Darnell, in this story which finds Dana unexpectedly piloting a plane when the pilots are knocked out by food poisoning. It's a camp classic -- much of the dialogue was used, unchanged, in the comedy Airplane! (1980) -- yet somehow Dana emerges with his dignity intact.