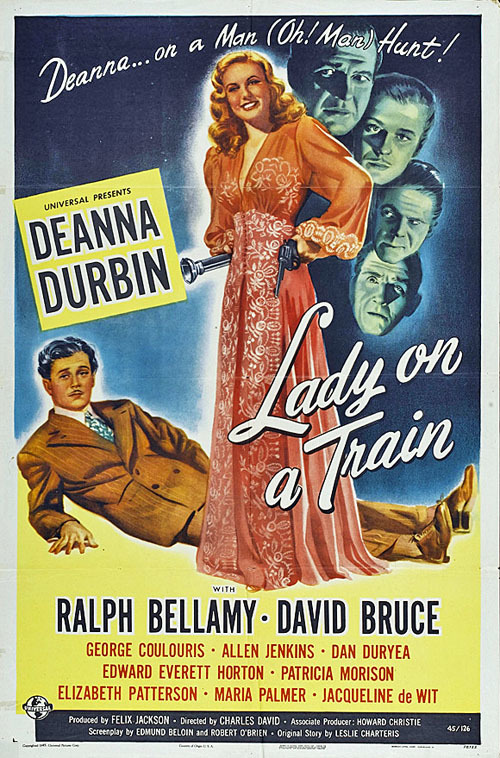 The season of good cheer can be as dark as it is merry. It is a time of crowded stores, a hectic pace and maybe even a bit of loneliness. Sometimes a heartwarming holiday flick just doesn't fit the mood. The antidote? A healthy helping of noir.

Check out these films that view the holiday season from the dark side:

Cathy O'Donnell and Farley Granger are perhaps the sweetest couple in film noir. There was no pair better at playing bewildered innocents betrayed by the darkness of the world around them. In Nicholas Ray‘s directorial debut, Granger is Bowie, a hapless young man who has just escaped from prison with bank robbers T-Dub (Jay C. Flippen) and Chicamaw (Howard Da Silva). Wrongly convicted of murder, all he wants to do is find a lawyer to clear his name so he can play it straight.

The gang hides out at a gas station owned by Chicamaw's alcoholic brother, and essentially run by the gangster's niece Keechie (O'Donnell). Bowie and Keechie have a rough start, Keechie is clear in her disapproval of the criminals, but there are also immediate sparks between the two and they are soon on the run together.

They marry and set up a cozy, if humble love nest in a motor park. It is Christmastime, so they buy a tree and decorate it with sparkling ornaments.  They lay by the fire and dream, losing their worries to the kind of love neither of them has ever known.

Their peace is interrupted by Chicamaw, who slinks in with quiet menace, gobbling up a dish of holiday candy and insisting Bowie pull another job with him and T-Dub. He looks at the tree, clearly envious of the happy domestic setting, and slowly flicks at the ornaments, making them ring like bells. Then he hits one a bit too hard and it flies off while another is crushed. The message could not be clearer: Christmas has been cancelled, by order of Chicamaw.

Filmed undercover on the busy streets of New York, this late period noir taps into the bleakness of the holiday season for those who exist outside of its cozy togetherness.

Director and writer Allen Baron stars as Frank Bono, a killer for hire who comes to the uncomfortable realization that he is tired of being alone. The empty-hearted product of an orphanage, where he appears to have been treated well, but not truly loved, he is without attachments and perfectly suited for his profession.

That all changes when Bono becomes reacquainted with Lori, the gently soulful sister of an old orphanage chum, at a Christmas party. He attempts to woo her, but the only women he's known are whores, and he can't see winning Lori as anything more than completing a transaction. Mistaking her kindness for love, he begins to have hope, a deadly emotion for a contract killer.

Baron is perfect as the damaged Bono. He's hard and cynical, but has received just enough kindness from the nuns who raised him to have a tiny, and growing, yearning for companionship. When his professional reserve is cracked, he realizes how ill-equipped he is for normal human interaction.

Gravel-voiced Lionel Stander emphasizes Baron's emptiness with a brutally effective narration in which he spits out lines in a rough, but oddly sympathetic fashion. The blacklisted actor did not appear in the credits, which is ironic, as he was the only name performer in this beautifully filmed independent production.

With its jolly Christmas carols and cheerful title cards, it's easy to think you're up for sleigh rides and snowball fights when watching the credits of this unusual noir. There's a dramatic switch in mood once the action begins though. There are plenty of wreathes and even a heavenly choir on the soundtrack, but a punch is not of the variety served in dainty cups, but a swift left to the jaw.

Robert Montgomery directs himself as legendary private dick Philip Marlowe in this flawed, but fascinating flick that is most famous for being filmed completely from the actor's point of view (you only get a glimpse of him when he looks in the mirror). The detective decides to branch out and submits a story to a crime magazine. His famous name, not to mention the gumshoe's facility with a tricky plot, attracts the attention of the publication's editor Adrienne Fromsett (Audrey Totter).

She tries to hire him to find her boss' missing wife. He is skeptical, as he is of all women, but he takes a large fee for his story, as well as to take on the case. The movie is often overwhelmed by its gimmick, which can sometimes be laughably awkward, but it's an interesting experiment. Totter's tart presence alone makes this a must-see for any fan of the genre.

While recovering from a back injury in a hospital one Christmas Eve, World War II veteran Bob Corey (Gordon MacRae) is visited by a beautiful stranger. Fuzzy-headed with drugs, he struggles to understand her message of panic.

The next morning, he only remembers that his wartime buddy, and future business partner Steve Connelly (Edmond O'Brien) is in trouble. Corey has fallen in love with anti-femme fatale and capable nurse Julie Benson while under her care. The two team up to learn the identity of the mysterious woman (played with dreamy allure by Viveca Lindfors) and save Steve.

What follows is a satisfyingly twisty mystery with plenty of surprises and suspense. More famous for starring in musicals, MacRae fits his uncharacteristically dark role well. Dane Clark is also magnetic as a former Army buddy of Corey and Connelly, and Ed Begley hits the right cynical note as a police captain who has seen it all and wants a refund.

Universal Studios singing star Deanna Durbin was undeniably charming, but somehow her sunny demeanor has led modern audiences to believe her films were saccharine bits of fluff, that isn't so. Perhaps the young Universal star could be a kitten, but she had claws, and she used them.

So it should come as no surprise that she is at her most appealing in what may be the only big studio crime drama/film noir/musical/romance. As mystery novel fan Nikki Collins, she witnesses a murder through the window of her train compartment. Determined to find the killer, and secretly thrilled to play detective herself, she recruits Wayne Morgan (David Bruce), her favorite crime novelist, to help her.

Morgan isn't as hardboiled as his characters, but he finds the determined Ms. Collins impossible to deny.

Christmas plays a calming role in this flick, though admittedly with a noir edge of danger. Alone in a hotel room for Christmas Eve, Durbin calls her father and sings Silent Night for him. Her peaceful, pure rendition of the song is the calm in the eye of the storm and could almost stand alone as a short film.

Just outside the door, a man who has been sent to steal evidence from her listens, enchanted. Everything stands still when Durbin sings.

Also of note in the cast is Ralph Bellamy, playing a role much different from his standard jilted boyfriend.

Do you have a favorite holiday noir? Please share it in the comments!