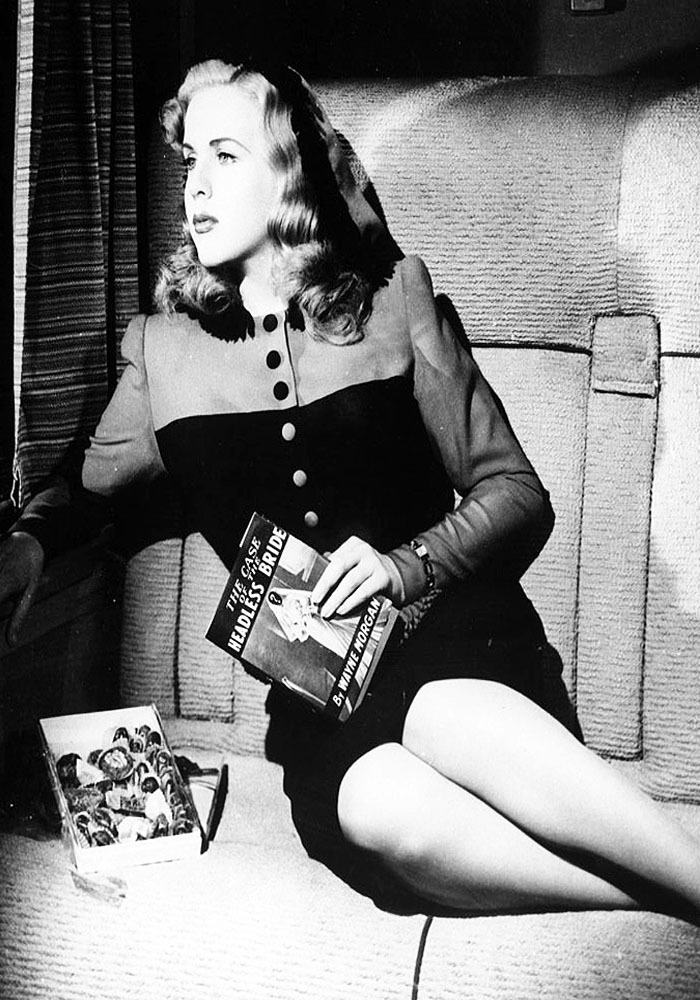 There's something extra-special about the holiday classics we enjoy year after year. Beyond the pleasures of the films themselves, over time the movies also become wrapped up in our heightened memories of the holiday season as we remember sharing them with family and friends.

Yet as special as the familiar Christmas classics are, it's also fun to 'mix it up' and add new viewing to the annual holiday rotation. Here are a dozen suggestions for those who'd like to add something less familiar to their seasonal viewing:

Bachelor Mother (1939) - This wonderful romantic comedy may not immediately come to mind as a 'Christmas movie,' yet it's set entirely between Christmas Eve and New Year's Day, making it perfect seasonal viewing. Ginger Rogers was never lovelier or funnier than she was as shopgirl Polly Parrish, who has quite a day of it when she's laid off from her seasonal job at a department store and finds a foundling on a doorstep. David Niven is at his most charming as the son of the department store owner who gives Polly back her job so she can care for 'her' baby. The scene where the befuddled Polly hears she's rehired is absolutely hilarious, as is the New Year's Eve dance sequence where Polly speaks 'Swedish.'

Larceny, Inc. (1942) - Edward G. Robinson stars as one of three ex-cons who buy a luggage business, hoping to rob the vault in the bank next door, then discovers they enjoy life as honest businessmen. When evil Leo (Anthony Quinn) gets out of the pen and tries to pull off the bank robbery, Robinson and his pal Broderick Crawford go into action to prevent the crime on Christmas Eve -- dressed in Santa Claus suits! It's another film which doesn't have Christmas in the forefront of the story, but the season provides a nice backdrop to the action and the story leaves one filled with good cheer.

I'll Be Seeing You (1944) - This film, which begins a couple days before Christmas and ends on New Year's Day, is one of the best unsung Christmas films, and has happily received renewed exposure in recent years thanks to a DVD release and TV showings. It's a touching story about two lost souls finding each other at Christmas. Ginger Rogers plays Mary, sent to prison for manslaughter after killing someone in self-defense. Due to good behavior she's given a Christmas furlough from prison to spend the holiday season with her family. On the train she meets Zachary Morgan (Joseph Cotten), an army sergeant furloughed from a hospital where he's being treated for what we now call post-traumatic stress disorder. She invites Zach to dinner with her relatives, and the relationship deepens from there. This moving film includes outstanding performances by Spring Byington and Tom Tully as Mary's aunt and uncle, with Shirley Temple as Mary's initially wary young cousin.

Since You Went Away (1944) - This WWII home front classic stars Claudette Colbert as a woman trying to raise her daughters (Jennifer Jones and Shirley Temple) and make financial ends meet when her husband goes off to war. This superbly told film isn't a Christmas movie, per se, but it builds to a finale at Christmas, 1943, which will elicit honestly earned tears from any sentimental viewer. The large cast includes Joseph Cotten, Hattie McDaniel, Robert Walker, Monty Woolley, Agnes Moorehead, and Lionel Barrymore.

Lady on a Train (1945) - It's almost Christmas, and lovely Nikki Collins (Deanna Durbin) is on a train headed toward spending the holidays with her aunt in New York. While at a station stop Nikki looks up from her mystery novel and chocolates to see a murder take place through her train window! This fast-paced movie combines the screwball comedy, film noir, and musical genres -- all this and Christmas too! Deanna sings three numbers including 'Silent Night.' The terrific cast includes Dan Duryea, Ralph Bellamy, Patricia Morison, Edward Everett Horton, and David Bruce.

My Reputation (1946) - Barbara Stanwyck plays Jessica, a young widow from Chicago who falls for Scott (George Brent), a dashing but commitment-shy army major. Their romance scandalizes her staid social community, coming 'too soon' after Jessica's husband's passing and with the 'wrong' sort of man. In addition to a nice ski lodge sequence where Jessica and Scott get to know one another, the last third of the film is set between Christmas Eve and New Year's Day, making excellent seasonal viewing.

Never Say Goodbye (1946) - This diverting romantic comedy stars Errol Flynn and Eleanor Parker as a divorced couple whose young daughter (Patti Brady) fervently hopes they will remarry. Most of the film isn't especially Christmasy -- and then comes the Christmas Eve sequence with Errol Flynn dashing around the house in a Santa Claus suit! Santa never looked so good!

Lady in the Lake (1947) - Robert Montgomery famously shot this Philip Marlowe mystery in the 'first person,' with the camera acting as Marlowe's eyes. What's sometimes forgotten is the film has a Christmastime setting, with the season -- including cheery Christmas music over Christmas card opening credits -- providing an ironic contrast to the murder mystery throughout the film. Audrey Totter, Lloyd Nolan, and Leon Ames costar.

It Happened on Fifth Avenue (1947) - This Christmas film has received renewed attention in recent years thanks to DVD and television. The Oscar-nominated story concerns a hobo (Victor Moore) who moves into a Fifth Avenue mansion each winter when the owners are in Virginia. Before long he's joined by some homeless vets (including Don DeFore and Alan Hale Jr.) and a young lady (Gale Storm) no one realizes is the daughter of the home's owners. Soon her parents (Charlie Ruggles and Ann Harding) show up too, but don't disclose their true identities to their 'guests.' There's plenty of Christmas spirit, including Gale Storm singing 'That's What Christmas Means to Me' on Christmas Eve.

Mr. Soft Touch (1949) - Mr. Soft Touch is better known as Joe Miracle (Glenn Ford), and he's on the run from the mob. He hides out at a settlement house during the Christmas season and falls for a social worker (Evelyn Keyes). At one point Joe even dons a Santa Claus suit as a creative way to hide from the bad guys.

Come to the Stable (1949) - Despite the Christmasy-sounding title, this actually isn't a Christmas movie at all -- yet it feels like a Christmas movie and is an excellent choice for the holiday season. This story of a pair of nuns from France (Loretta Young and Celeste Holm) who come to America to fulfill a pledge to build a children's hospital is, by turns, whimsical, funny, and affecting. The recipient of multiple Oscar nominations, Come to the Stable has the same kind of positive, warm vibe as the very best Christmas movies and leaves the viewer feeling better for having seen it.

On Moonlight Bay (1951) - Like seasonal favorites Meet Me in St. Louis (1944) and Little Women (1933 and 1949), much of this charming family film isn't set at Christmas at all. In this film, based on stories by Booth Tarkington, Doris Day plays the tomboyish Marjorie, who loves to play baseball and also loves the boy next door (Gordon MacRae). Marjorie's parents are played by Rosemary DeCamp and Leon Ames, her little brother is Billy Gray, and the housekeeper is Mary Wickes. There's an absolutely lovely sequence where Doris sings 'Merry Christmas, All' which makes it a good film to watch at this time of year.