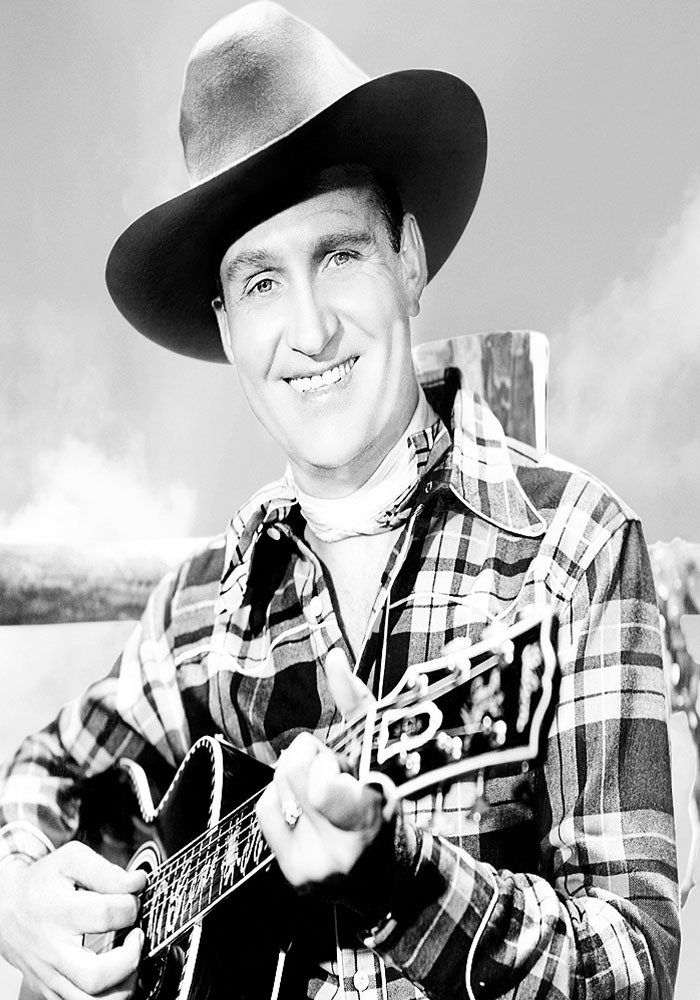 The Old Corral: Here Comes Santa Claus (And The Cowboy And The Indians)

Gene Autry wore a lot of hats, and not just in the literal sense. His entertainment career and business empires were quite diverse, and today he's known by different people for different things: Cowboy star, baseball team owner, the Christmas song guy.

Gene's 1949 recording of Johnny Marks' 'Rudolph the Red-Nosed Reindeer' remains one of the top-selling records of all time. It, along with a sleigh full of other Christmas tunes, established Gene in the hearts and minds of kids who'd never seen a Western -- and made him a lasting part of the holiday tradition.

'Here Comes Santa Claus' was written by Autry in 1947, inspired by his appearance in the Los Angeles Christmas parade. It was called the Santa Claus Lane Parade in those days. 'Here comes Santa Claus!' kids exclaimed as the star of the show got closer. Oakley Haldeman set Gene's lyrics to music, and released it in 1948 where it was a huge hit.

As Christmas of 1949 rolled around, it made sense to give 'Here Comes Santa Claus' another shot in the arm -- and it was written into Gene's next film, the modern-day Western The Cowboy and the Indians.

Gene's a rancher who finds Indians grazing their sheep on his land, leaving nothing for his cattle to eat. Confronting the trespassers, he learns that the Navajos are suffering from malnutrition. He also sees how they're cheated by Smiley Martin (Frank Richards), a crooked trading post proprietor -- and that the Indian Bureau is, well, part of the government.

When Lakohna (Jay Silverheels) is falsely accused of assaulting the chief and stealing a valuable turquoise necklace, Gene and Champion mount up to help Lakohna bring the real crooks to justice and aide the starving tribe -- resulting in a shootout (among the rocks of a number of different locations) where the Navajos come to the rescue! Gene's also aided along the way by a pretty doctor (Sheila Ryan) and grizzled old ranch hand, Tom (Hank Patterson). Somehow it all ends up with Gene riding alongside Santa Claus (Patterson) singing 'Here Comes Santa Claus' as they bring toys to the kids on the reservation. In a way, it comes out of nowhere, but it's so satisfying you don't care.

Along with the Christmas tune, there's plenty to recommend The Cowboy and the Indians. The script by husband-and-wife team Dwight Cummins and Dorothy Yost (how's writing cowboy movies for a family business?) takes the B-Western to a place it rarely goes. We get to see a genuinely angry Autry -- he goes from being mad at the Indians for trespassing to being truly cheesed off by their mistreatment. The film's sympathetic approach to the Indians precedes William Wyler's Broken Arrow by a year. There's a well-done scalping/toupee joke. And it marks the first time Clayton Moore and Jay Silverheels appeared onscreen together -- The Lone Ranger TV show would soon beckon. Speaking of Silverheels, he brings dignity to Lakohna -- a college-educated veteran of Iwo Jima, just as he'd bring to episode after episode as Tonto.

John English directed a lot of Autry's movies, and he was as adept with the dialogue and relationship stuff as he was with the ridin' and shootin'. He also had an eye for the incredible vistas offered by locations like Lone Pine, and with William Bradford behind the camera, The Cowboy and the Indians boasts production values far beyond what the budget would have you expect. These guys were pros -- Autry had worked with them back in the Republic days -- and though they could probably make one of these movies in their sleep, it never feels like they're coasting.

This was the first picture Autry filmed in Pioneertown, California. Located in the Yucca Valley near Joshua Tree, it was a live-in Western movie set. Cast and crew could stay there while movies were being shot. Autry's production company would use Pioneertown extensively for his TV show and the Annie Oakley series. Pioneertown is an actual non-movie town now, though a good portion of it burned in 2006.

Today, The Cowboy And The Indians stands largely as a chance to see Gene Autry, cowboy star, give equal time to Gene Autry, Christmas crooner. But it's more than just something to look up on YouTube during the holidays. Its social commentary, though simplistic, feels genuine -- and unlike a lot of 'message pictures,' its 70-minutes are thoroughly enjoyable and completely unpretentious.

Toby Roan watches a lot of cowboy movies. His blog, 50 Westerns from the 50's, proves that point.