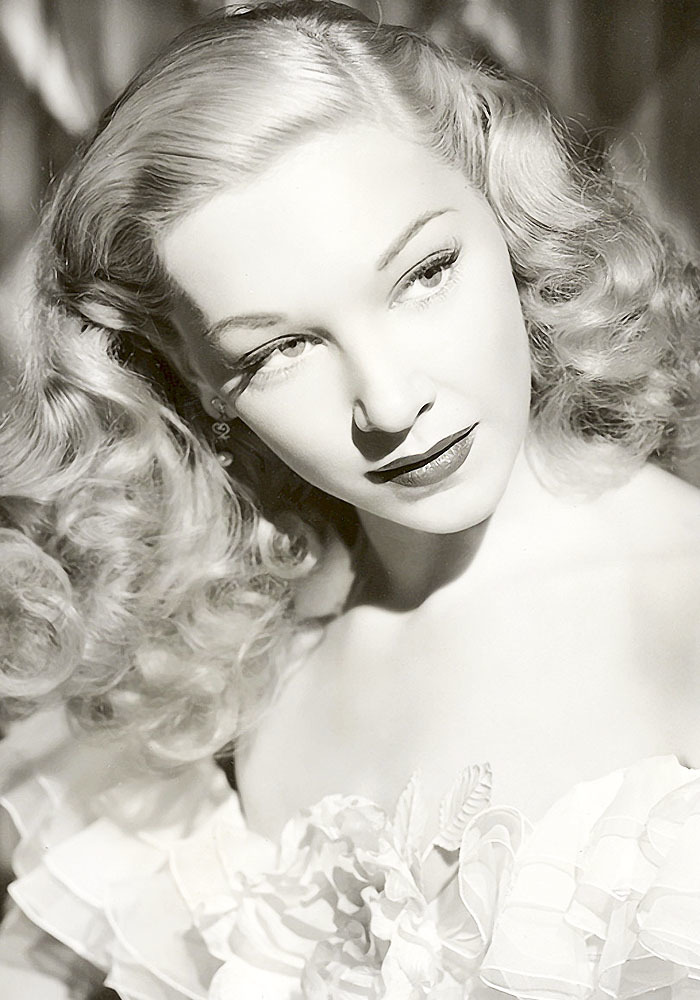 Beautiful, haughty, serene--the actress, ballet dancer and ice skater Belita often seemed to be living in her own melancholy world. She was like a disappointed debutante, carving out a lonely existence among people more ordinary than she. The multi-talented star made her name as a child ballerina and competitive ice skater, but she is also remembered today for the eleven films she made in bit, supporting and feature roles.

Among the best of these films is a trio of noirs she made for the poverty row studio Monogram. While her productions were not as lavish as those launched for Fox's Norwegian skating star Sonja Henie, the movies were of high quality and did not betray their humble roots. Belita also had more range than Henie where she could play cheerful, but she was just as comfortable in dramatic roles.

Born in England, Maria Belita Jepson-Turner was set for a career in entertainment from an early age. Her mother had been an aspiring ice skater, and she transferred her ambitions to her daughter. Belita began ballet training at two and quickly progressed to a career on the stage. She began skating as a way to further hone her strength and grace for dance, but the ice soon became her primary focus. By age eleven she was competing in the 1936 Olympics, shivering in her skates at the sight of the Nazi soldiers heavily populating the venue.

Belita had not set out to be an actress, and the movies were not a part of her mother's career plans for her, but when they found themselves stranded in the United States after World War II, she had to find a way to make a living.

The skater made her uncredited debut performing a solo number for Ice-Capades (1941). In this brief appearance, Belita demonstrated that she clearly had screen presence. She headlined her next two films, the comedy musicals Silver Skates (1943) and Lady, Let's Dance (1944), playing a screen version of herself.

Though Belita lacked acting technique, her subtle charisma was so powerful that her inexperience went unnoticed. This is partly due to her good luck in receiving roles well within her range of ability. Unlike many stars who were hired primarily for physical abilities, her dramatic, and even sometimes her comedic scenes were entertaining on their own. She expressed herself completely on the ice, but she was always a pleasure to watch in high heels and evening gowns as well.

Belita's languid beauty was similar to that of Veronica Lake, which must not have gone unnoticed by Hollywood, as she made a brief appearance as a peek-a-boo-banged femme fatale in Gene Kelly's passion project Invitation to the Dance (1956). She also showed off her versatility in a series of bit parts, from a turn as a working class Parisian in The Man on the Eiffel Tower (1949) to her small, but pivotal role as a Russian ballerina who takes notes and names names in Never Let Me Go (1953).

While Belita was an all-around pleasant screen presence, whatever the genre, she made her strongest impression in films noir. The actress made a trio of them, one after the other, and in them found the best outlet for her sad, sweet, and quietly tough persona.

These flicks are not necessarily classics of the genre, but all of them are immensely entertaining, and a must see for noir fans, if only to see how unusually well a skating scene fits into a crime movie.

Belita found her strongest dramatic role as an ice capades star tormented by a husband who may or may not have died in an avalanche. In a later interview, she chose the film as her favorite, particularly because she appreciated the innovative way her skating scenes were staged. They are among her most entrancing numbers, some of them as full of the titular suspense as the action off the ice. In a pivotal scene she leaps through a circle of swords, a moment that sends chills of fear up the spine even on multiple viewings.

She is teamed with Barry Fitzgerald as a man with a shady past who plans to take her husband's place, both professionally and romantically. While the pair would play lovers in two films, there was always more tension than affection between the characters they played. This is romance film noir style, with a heavy helping of fear, mistrust and deception. Belita's essential decency played well opposite Fitzgerald's high-strung, amoral characters.

Once again starring opposite Barry Fitzgerald, Belita is a showgirl and the beleaguered girlfriend of his tightly-wound gangster. Fitzgerald is losing his footing in the local rackets and it makes him paranoid about everything, especially his girl. Though it is the actress's weakest film noir role, and doesn't have a skating routine, she is deeply sympathetic as a trustworthy woman who breaks down in the face of constant suspicion.

A particularly strong supporting cast features Akim Tamiroff, Harry Morgan and Joan Lorring as employees of a cafe Fitzgerald owns, and John Ireland as a desperate man in debt. Noir staple Elisha Cook Jr. is typically squirrely as a thug from the gang threatening Fitzgerald.

Belita found perhaps her best romantic chemistry opposite Preston Foster in her last noir. She plays the ex-girlfriend of a detective she claims has wrongfully convicted her of theft. The film begins as she is released from a four-year stint in prison, and believed to be out for revenge against those who put her behind bars. She appears one night in Foster's apartment, claiming she has nowhere else to go, and while the anxious gumshoe remains on guard, he falls under her spell again.

The romantic tension between Belita and Foster is one of the best things about The Hunted. They quietly battle with each other: she is hurt and he is suspicious (what is it about men not trusting Belita in these movies?), but their mutual desire is palpable.

This time around, Belita is solo on the ice, and her numbers are not as elaborate as in her previous features. The skating star glides around on a darkened ice rink, lit only by a spotlight. It is as noir as an ice routine can be, and with the brooding Foster watching with longing from the sidelines, the routine fits well with the overall moodiness of the film.