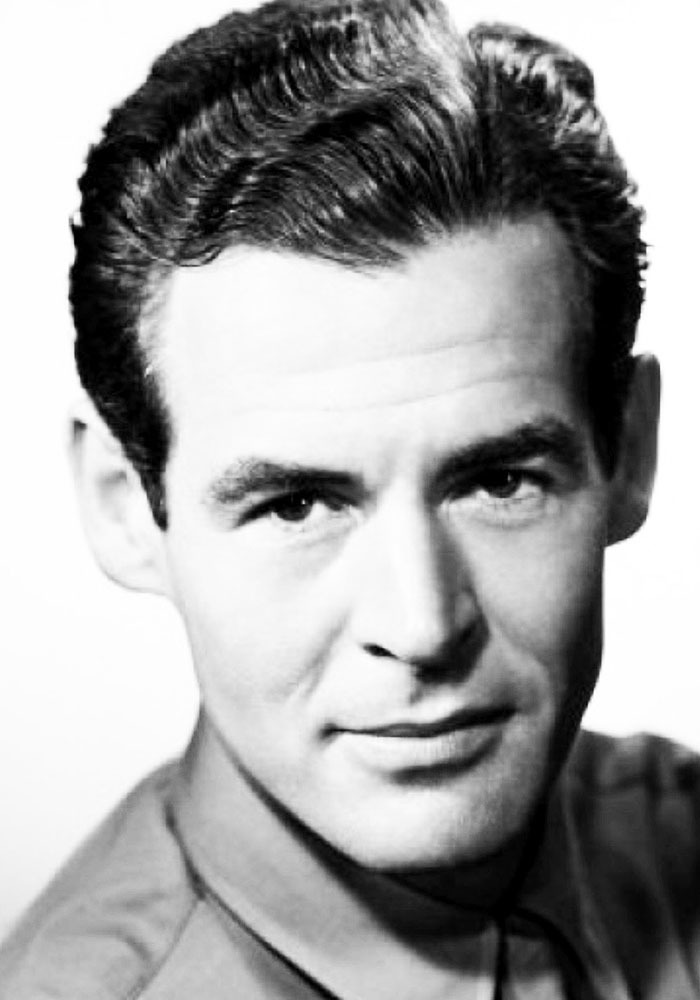 While he was especially known for playing troubled, tortured characters, off the screen there was a far different Robert Ryan. Born in Chicago, Illinois, on November 11, 1909, and a Dartmouth graduate, Ryan was a quiet, introspective man was committed to his family and community. He married Jessica Cadwalader in 1939, a union which would last until her death from cancer in 1972. Beginning in 1946 the Ryans had three children in a span of five years, Tim, Cheyney, and Lisa.

One of the interesting, but little-known, aspects of Robert Ryan's life is that he and his wife co-founded a private school, still in existence decades later. Dissatisfied with crowded postwar educational options, the Ryans started the Oakwood School in their backyard in 1951; they later rented space in an empty synagogue and moved to property in North Hollywood, where the elementary campus of this prestigious school still exists today.

While Jessica spearheaded the development of the school itself, her husband played a key role in raising the funding, including organizing theatrical performances benefiting the school. Director Lamont Johnson, another key early benefactor of the school, was quoted by Ryan's biographer Franklin Jarlett as saying 'It was Bob's steady hand at the tiller and on the checkbook that kept us going.' Johnson also said the Ryans' were 'the soul and spine of the whole thing.'

Lisa Ryan told historian Alan Rode, 'For some strange reason she [Jessica] thought it would be a good idea to start their own school...the older I get, the more I think what a weird thing that was to do!' From the modern vantage point, when home schooling, charter schools, and online schools are common, the Ryans' 'outside the box' thinking and determination to create the kind of education they wanted for their children seems cutting edge and ahead of its time.

The Ryans' love for education served their own children well -- one son is today a professor at the University of Oregon in Eugene -- and also provided excellent opportunities for countless other children over a span of decades.

Robert Ryan passed away July 11, 1973, just a year after the death of his wife Jessica. A Robert and Jessica Ryan Fund was created benefiting the Oakwood School.

An excellent book on Ryan's life and career is Franklin Jarlett's Robert Ryan: A Biography and Critical Filmography, and due out this spring is The Lives of Robert Ryan by J.R. Jones.

Below is a personal overview of some Ryan films which help to capture the depth of his fine career.

Bombardier (1943) and The Sky's the Limit (1943) - In order to fully appreciate the progression of Robert Ryan's career you should begin at the beginning! Before WWII Ryan played supporting roles of various sizes in a dozen films; in Bombardier he's a young airman being trained by Randolph Scott; in one of his key moments, Ryan rushes into church one Sunday morning to announce the Japanese have bombed Pearl Harbor. In The Sky's the Limit Ryan is congenial as Fred Astaire's military pal.

Trail Street (1947) - Ryan was reunited with Randolph Scott in his first film after his wartime service in the Marines. This is one of Ryan's lighter roles, playing an earnest young land agent aided by Bat Masterson (Scott) in cleaning up his Kansas town.

Crossfire (1947) - Crossfire was released the same year as Trail Street, and what a contrast in roles! In this murder mystery Ryan received his only Oscar nomination, as Best Supporting Actor, for his intense role as an anti-Semitic soldier; in a searing performance, layer by layer Ryan reveals a mentally unstable bigot.

Caught (1949) - Ryan plays the domineering Smith Ohlrig, a multimillionaire who sweeps sweet, dreamy young Leonora (Barbara Bel Geddes) off her feet in this absorbing melodrama. Unfortunately Ohlrig only cares about acquiring and controlling, and once they're wed he unfeelingly treats his wife as a possession, prompting her to flee to a shabby apartment and a relationship with a sympathetic doctor (James Mason). Ohlrig is said to have been based on Howard Hughes, and although the script never tells us exactly what makes his character tick, Ryan is electric. His ultimate clash with another great actor, James Mason, is marvelous.

Born to Be Bad (1950) - Ryan plays the cocky writer Nick, who recognizes how Christabel (Joan Fontaine) manipulates men for personal gain but can't help being attracted to her anyway. The best line in the movie might be Nick telling Christabel 'I love you so much I wish I liked you!' Ryan is at his most likeable in this film, handsome and with an edgy charm; alas, though they have a notably steamy relationship, Christabel ultimately only sees dollar signs!

The Racket (1951) - The Racket reunited Ryan with his Crossfire costar, Robert Mitchum. Ryan plays a somewhat deranged gangster who squares off opposite Mitchum's incorruptible police captain. The interplay of these two very charismatic actors is terrific, with Mitchum's quiet but compelling style a great contrast with Ryan's more dynamic criminal.

On Dangerous Ground (1951) - This might be my favorite Robert Ryan film, a riveting and visually stunning crime drama. Ryan plays Jim Wilson, a police officer who has been dealing with brutal criminals so long he's fallen over the edge emotionally, becoming almost as violent as the crooks he deals with. Jim is given a 'cooling off' period and sent to assist with a murder case in a snowy upstate rural area, which his superior hopes will also cool Jim's temperament. Jim's relationship with a blind woman (Ida Lupino) will prove to change his life. The lead performances, combined with the Bernard Herrmann score and George Diskant's stunning snowy vistas (filmed in Colorado) make this a must-see.

Inferno (1953) - Ryan gives a tour de force performance as Donald, the wealthy but obnoxious husband of Gerry (Rhonda Fleming). When Donald breaks his leg in the desert, Gerry and her lover (William Lundigan) decide to leave him to die of exposure. When Donald realizes he's been abandoned, he's not about to up and die! Ryan manages to convey a great deal about his character and his evolution, despite not having another character to interact with for most of the movie. Ryan can do more with his eyes than many actors can with pages of dialogue, and Donald's courage gradually wins audience sympathy.

The Naked Spur (1953) - Another fantastic Ryan film, as he plays 'wanted dead or alive' outlaw Ben Vandergroat, who is captured by brooding bounty hunter Howard Kemp (Jimmy Stewart). As the film begins, Ryan's character is a genial contrast to Stewart's intense, dark character, but gradually viewer perceptions of the two men shift, with Vandergroat finally revealing the depths of his cold heart. Ryan's pseudo-friendly killer in this Anthony Mann film foreshadows the classic Western villains of Budd Boetticher's later Westerns, such as Lee Marvin in Seven Men from Now (1956) or Richard Boone in The Tall T (1957).

Bad Day at Black Rock (1955) - This classic mystery features five Oscar-winning actors, along with Robert Ryan, who should have won an Oscar at some point. Spencer Tracy plays a one-armed veteran who uncovers a small town's dark secret, with Ryan the film's leading villain. Tracy said of Ryan, 'Bob is so good in this part, he scares the hell out of me.'

The Proud Ones (1956) - I like this film because it's a change of pace from Ryan's villains, a solid Western with echoes of High Noon (1952). Ryan plays a brave U.S. marshal whose town is visited by old enemies -- just as his vision is going bad. The marshal's fiancee (Virginia Mayo) begs him to leave, especially as the townspeople don't want 'trouble,' but he's determined to meet his duty as he sees it, aided only by a hotheaded young deputy (Jeffrey Hunter). The gradual development of the marshal's relationship with his deputy, who once had a grudge against the marshal himself, might be the most satisfying aspect of the movie.

The Longest Day (1962) - Ryan has a relatively small role in this classic WWII film, as Brig. Gen. James M. Gavin, but his authenticity and ability to make a character come alive in just a few minutes contributes a great deal to this epic D-Day film's overall storytelling success.

Robert Ryan left behind a rich legacy, both on and off the screen.