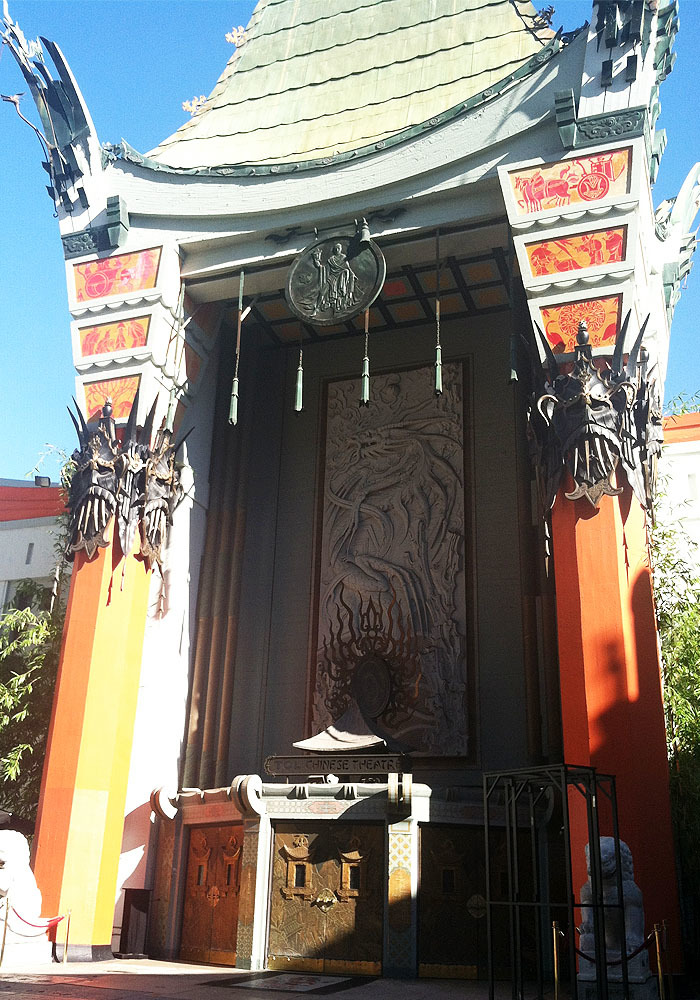 A Trip Through the 2015 TCM Classic Film Festival

The 2015 TCM Classic Film Festival took place over four wonderful days in March where, once again, classic film fans from around the country, not to mention places like Canada, Scotland, and Japan, came together to celebrate wonderful movies.

Though Robert Osborne was greatly missed this year, the festival carried on in fine style without him, with pros like Leonard Maltin, Eddie Muller, and Illeana Douglas introducing many of the movies.

Again this year the schedule was packed with many appealing options and hard choices; as film critic Lou Lumenick wrote in the New York Post, 'There are no bad choices at the TCM Classic Film Festival.'

You know you're in the right place when there's a packed morning audience for a late silent like Why Be Good? (1929) and the audience applauds when Grady Sutton appears on screen!

This year I saw sixteen films, one more than I saw in 2014; in 2013 I only saw eleven films. Ten of the films I saw were digital presentations, with six in 35mm.

The festival officially began on Thursday, March 26th, but my time at the festival began with a press conference the preceding day. Held at one of the Chinese multiplex theaters, the press conference was a different format this year due to the absence of Robert Osborne; Ben Mankiewicz and TCM execs Jennifer Dorian, Charlie Tabesh, and Genevieve McGillicuddy took the stage together rather than the hosts appearing separately.

Mankiewicz said every year it becomes clearer that no other channel could host an event like the festival; he said there is a connection between TCM and its fans which is 'felt viscerally' and that movie fans 'don't just watch us.' He feels TCM has an important responsibility to help guard the visual arts.

Beyond the movies, though, the very best part of the festival is the chance to reconnect in person with so many people from the classic film blogging community who have become 'real life' friends thanks to the festival. The festival has the feel of a very happy family reunion, with friends on hand to enjoy every single screening. I can't express strongly enough what a positive and upbeat experience the festival is thanks to so many great people being there to share it.

It's also fun to 'talk movies' with folks met while standing in line. Anyone considering attending for the first time next year, particularly those contemplating coming alone, should rest assured they will find a very congenial atmosphere.

I also had a full schedule of 'unofficial' events starting on the first day, including a tour of the Hollywood Museum, a tour of the Warner Bros. backlot (thanks to Matt of the Warner Archive!), and a gathering of bloggers at the historic Formosa Cafe, all of which made a great start to the festival!

The official events on March 26th began with seats to watch the red carpet arrivals for opening night at the Chinese Theatre, with stars including Diane Baker, Shirley Jones, and Robert Morse. Julie Andrews and Christopher Plummer had to dash by in order to get inside in time to be interviewed!

Soon it was time to race off for the first of my sixteen movies seen at the festival, Greta Garbo in Queen Christina (1933), shown in 35mm. My first non-comedy Garbo film! I enjoyed it, and it was followed by Illeana Douglas introducing an old favorite, My Man Godfrey (1936).

Friday, March 27th, was a bright, sunny day, but I didn't see much of the sunshine, as it was a five-film day for me!

Last year my Friday morning began by seeing John Ford's Stagecoach (1939) on a big screen for the first time. It was one of my favorite screenings of 2014, so it seemed appropriate to begin Friday this year with another John Ford film, My Darling Clementine (1946).

Like Stagecoach, this was my first time seeing Clementine on a big screen. Since last seeing Clementine I've become quite a Tim Holt fan, and the movie has never resonated more deeply with me than it did on this viewing. Everything about the movie is perfect, and Ward Bond and Holt as Wyatt's brothers make it all the more special. That moment at the end when Ward, as Morgan, fires his gun was more moving than ever.

Next, Eddie Muller conducted a terrific interview with David Ladd prior to a screening of The Proud Rebel (1958), another of my favorite films from this year's fest. David, who is outstanding playing his real-life father Alan Ladd's traumatized mute son in The Proud Rebel, spoke of how his father helped him keep his performance 'real' and honest. It was also special knowing star Olivia de Havilland's daughter, Giselle, was present in the audience watching her mother's performance.

I briefly popped over to the Hollywood Roosevelt Hotel for a quick glimpse of Ann-Margret being interviewed by Ben Mankiewicz in the hotel lobby; I didn't get very close, but at least I saw her! Then it was off to the El Capitan Theatre for Disney's Pinocchio (1940). The El Capitan is beautifully restored, with an organist playing before each movie, and I was glad I saw a festival film there again this year! Pinocchio was nicely introduced by William Joyce and Brandon Oldenburg, who will be taking over TCM's Essentials Jr. franchise this summer, where it will be renamed Camp TCM. I'd previously only seen Pinocchio in bits and pieces, but remembered it being scary, and it still had the power to frighten me as an adult! Though I found it a bit disturbing, I enjoyed it and especially appreciated the musical score.

After a quick dinner it was off to the Egyptian Theatre for the rest of the evening. The silent Buster Keaton film Steamboat Bill, Jr. (1928), introduced by Leonard Maltin, was presented with Carl Davis conducting a live orchestra playing his brand-new score, which was terrific. I didn't warm to Keaton's pathetic persona, but I admired much about the film, including Keaton's amazing precision stunt work as sets fall around him during a stormy climax, and seeing the movie in this format was an excellent experience.

I had originally planned to close the evening with a 'newer' film, Apollo 13 (1995), but I realized it would be extremely difficult to get back to the Chinese Theatre from the Egyptian in time to get in, and that evening I was feeling more of a 'classic era' vibe so I happily chose to remain at the Egyptian and watch a beautiful 35mm print of Rebecca (1940). This was my third time seeing Rebecca on a big screen, but it's always special, and I've never appreciated George Sanders and Reginald Denny more. Eddie Muller provided an excellent introduction, reminding the audience David O. Selznick had even more of an impact on the movie's final form than Hitchcock.

Saturday, the 28th, was another five-film day, kicking off with Colleen Moore in the silent film Why Be Good? (1928). I enjoyed Why Be Good? with its jazz baby silent era fun and I hope to get the Warner Archive DVD in the future. There are lots of interesting people in the cast, including Jean Harlow and Andy Devine in bit parts.

Next I attended a rare screening of Disney's So Dear to My Heart (1948). The movie was introduced by Leonard Maltin, who spoke of his hopes for the movie becoming better known and appreciated; Disney's 35mm print was absolutely gorgeous, and the audience response was wonderful, both during the movie and afterwards.

Maltin returned to introduce John Ford's not-on-DVD Air Mail (1932). Ralph Bellamy and Pat O'Brien star as pilots who don't like one another but are there for each other when the chips are down. Air Mail may not be a 'great' Ford film, but it's still mighty entertaining pre-Code fun, especially for someone like me who loves airplane movies.

Next up was Dick Powell in Preston Sturges' Christmas in July (1940), which I hadn't seen in several years and thoroughly enjoyed revisiting. Then it was time to pop into Club TCM for an hour, where we watched home movies from the Academy archive, introduced by Jane Withers, Bob Koster (son of director Henry Koster), and Steve McQueen's former wife, Neile Adams McQueen.

There was one more movie to go for the day! Since I'd never seen Douglas Sirk's Imitation of Life (1959) before in any format, seeing it was an easy call, and I enjoyed it. It was introduced by Maltin and former studio head Sherry Lansing, who spoke of the impact the film had on her as a teenager.

All too soon it was Sunday, March 29th, the very last day of the 2015 TCM Classic Film Festival.

In 2014, my Sunday morning started off in cheery style with the romantic comedy Sunday in New York (1963), and this year I kicked off the festival's last day in similarly sunny style with Doris Day in an old favorite, Calamity Jane (1953).

Calamity Jane joined My Darling Clementine, The Proud Rebel, and So Dear to My Heart as my top experiences of the festival. The audience was clearly filled with people who adored Doris and love musicals, and the response to the movie was terrific. I teared up a bit when Doris launched into 'Secret Love,' out of sheer happiness. The restored print looked fantastic!

Next, I enjoyed Anthony Mann's 'French Revolution noir' Reign of Terror (1949), which had sold out its initial festival screening and was awarded one of the slots left open on Sunday for repeats. Reign of Terror stars Robert Cummings and Arlene Dahl, with an interesting supporting cast including Richard Basehart, Norman Lloyd, and Charles McGraw. It's a visually stunning movie, thanks largely to John Alton's cinematography.

As soon as Reign of Terror was over it was time to hurry out and get in line for The Philadelphia Story (1940) at the Chinese Theatre. Like many classic film fans, I've seen The Philadelphia Story numerous times. It's always fun seeing a familiar classic like this one through fresh eyes after not seeing it for several years, especially when watching it with an appreciative audience. I especially noted the fine contributions of Ruth Hussey and Virginia Weidler on this viewing.

Since I love The Last of the Mohicans (1992) I enjoyed that Madeleine Stowe joined Illeana Douglas to introduce The Philadelphia Story. Stowe spoke of her love for classic movies and TCM, deftly turning the conversation back to TCM when Douglas asked Stowe questions about her career. It was nice seeing an actress one loves so enthused to share her admiration for classic movies.

Then it was time for the grand finale, Sophia Loren's appearance at a screening of Marriage Italian Style (1964), where she was interviewed by Ben Mankiewicz. Ben clearly appreciated the magic of the moment and admitted to being a bit nervous! Sophia was charming and down to earth, a real delight. This was a special event for everyone involved, the rare chance to see a true icon of the cinema in person, and the audience responded as enthusiastically as one might expect.

Marriage Italian Style (1964) was very different from the kinds of films I typically watch; I'm not sure I'd precisely say I liked it, but it was an interesting and broadening viewing experience. All in all, I was glad I attended it, especially for the chance to see Sophia.

Finally it was time to convene once more in Club TCM, this time to say goodbye to friends and express our hopes of meeting again in 2016! Given that each year's festival experience seems to be even better than the year before, I have no doubt that the 2016 TCM Classic Film Festival will be another amazing experience.