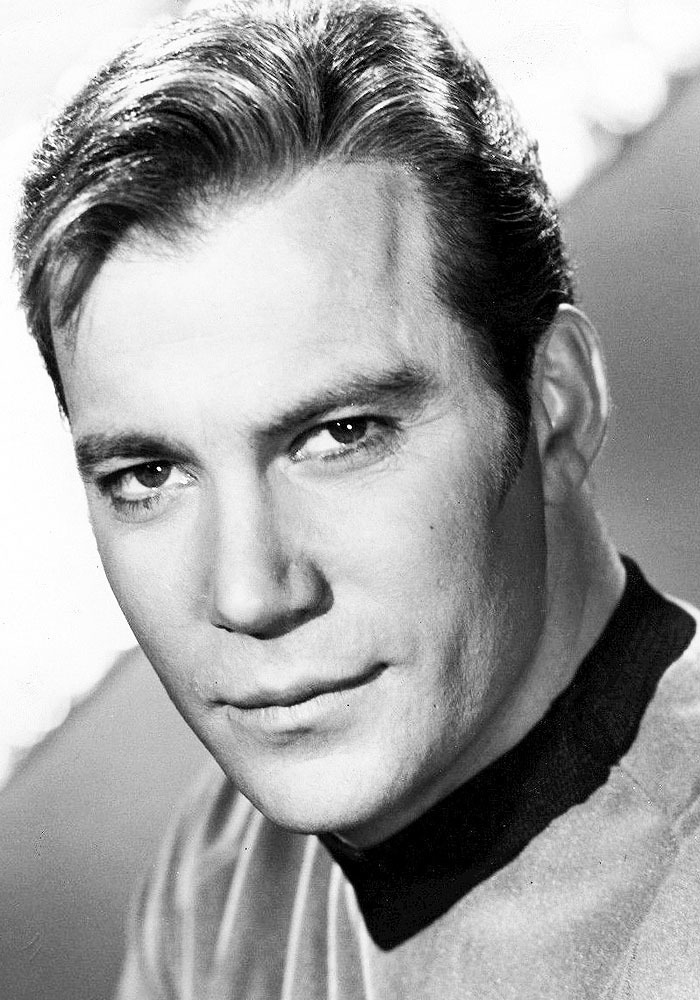 TV TIME: The Many Faces of William Shatner

Here's how big an icon William Shatner is: If you wiped his most famous role out of existence, one of the most popular characters in television history, he would STILL be one of the biggest icons the medium has ever known. In addition to his unforgettable performances as Captain James T. Kirk, the 84-year-old Canadian stars in two of the most memorable Twilight Zone episodes, 'Nick of Time' and 'Nightmare at 20,000 Feet.' In fact, his post-classic-era work is arguably enough to make him a TV immortal.

It's fashionable to mock William Shatner for many things, including...his tendency...to make...dramatic pauses, but he is one of the most charismatic personalities to ever grace the small screen, and he's often an effective (and non-histrionic) actor. Let's go beyond Star Trek, beyond Twilight Zone, even beyond Rescue 911 (OK, so that one's not so hard to overlook) and consider the many faces of William Shatner.

Smug Shatner: Dr. Kildare, 'Admitting Service': This early episode begins with a man fainting in a taxi and being helped by Kildare. When attending physician Toby Cunningham gives him an once-over and pronounces him fit to go home, Kildare is concerned. When the patient dies the next day, everyone at Blair General is concerned about a threatened massive lawsuit from the family.

Shatner is in classic condescending mode here, showing glimpses of the arrogance he often let bubble up as James T. Kirk. Cunningham is friends with Kildare, but he reminds the intern to observe protocol when they are interacting in front of the others, and he balks at the youngster's questioning of his examination. At one point Toby calls James 'Kiddo,' something even Dr. Gillespie doesn't do!

Until the tragic death of the poor man, Toby breezes through his rounds like he owns the place, pleasant and charming but with an undeniable swagger. Don't we want our doctors to command the room, though? The episode seems to argue against Cunningham at first, but ultimately offers a kind of 'aw, shucks' resolution that lets everyone off the hook. I'm disappointed Shatner has to act chagrined for much of the episode because his cocky, then angry doctor is a delight.

Classic Shatner Moment: Believing Kildare sold him out in discussions on the case with the brass; Toby gives the interns a withering speech in the cafeteria and follows it with a dramatic exit.

Legendary Shatner: Alexander the Great: This unsold pilot resurfaced after Shatner (in the title role) and co-star Adam West became superstars of the small screen. Yes, the idea of the future Kirk and Batman together in a period piece is enough to inspire chuckles, and I know West in particular has lambasted this effort, but it's professionally made and not as campy as it sounds. Seeing these guys in this setting with the likes of John Cassavetes and Joseph Cotten is odd, but the worst thing I can say about this curio is that it leaves you hanging.

Classic Shatner Moment: After planning a charge, a devil-may-care Alexander looks up to the sky, declares, 'For victory...' and after a long pause, finishes, 'and Greece,' then looks down.

Southern-Fried Shatner: The Virginian, 'Black Jade': There are times I watch a William Shatner performance and think, 'This guy is subtler than his reputation.' This is not one of those times. The offbeat episode features a lot of singing, but, no, none of it is from Shatner. In fact, our special guest star doesn't even appear for roughly 30 minutes, but before you ask for your money back, consider this: While it's a common pastime to speculate about the hair on top of Shatner's head in a given appearance, he seldom gets due credit for the hair on his face, and in 'Black Jade,' his mustache alone ensures the hour-and-a-half Virginian never drags.

A traveling African-American named Colby Jade meets the Virginian and the others during a cattle drive. He performs some music for them and -- oops -- inadvertently creates a stampede. He gives the Virginian a watch as restitution, but Trampas recognizes it as belonging to an old buddy and tracks down Jade to grill him on how he got it.

I could discuss the social relevance and political themes that unfold when Trampas finds the town Jade claims to own, but let's face it, the important thing is the sudden arrival of a band of outlaws led by Southerner (he actually comes from Virginia, too, but he gets a real name) Harry Swann. Trampas and Jade must join forces to survive when Swann and his gang challenge them to produce the stock of gold they believe is in the town. Swann's blatant and vocal racism makes an interesting contrast to the attitude Jade perceives when Trampas accuses him of having stolen the watch. I'll tell you one thing that isn't gonna be stolen: any scene Shatner's in. I enjoy James Watson's work as Jade, but Shatner's accent and overall gusto are the highlights of a story that doesn't quite hold together.

Classic Shatner Moment: A wounded Swann, being tended to by his girlfriend, tells her wearily, 'By Dang, woman, you don't even know how to tie a bandage!'

Everyman Shatner: The Man from U.N.C.L.E., 'The Project Strigas Affair': This season one episode is notable for teaming Shatner with Leonard Nimoy several years before Star Trek. Bill is the owner of a struggling extermination company recruited by U.N.C.L.E. to help discredit the ambassador (Werner Klemperer!) of an unspecified Eastern European country with a scheme involving a fake weapon known as Strigas. Two things I love about Cold War spy TV: the constant need to 'discredit' individuals instead of just taking them out, plus the fact that the countries are almost always unspecified.

Shatner is low key and not given a lot whole lot to do, with one notable exception (see Classic Shatner Moment below). Nimoy stands out as the Ambassador's ambitious (and skeptical) aide, though not necessarily in a good way. His performance seems warp speed away from the gravitas he would bring to Spock a few years later; I keep expecting to hear him say he 'vants to suck your blood.' The episode is an undeniable kick, but it's weird that Shatner is so far down on the TV icon totem pole, placing below series co-stars Robert Vaughn and David McCallum, Klemperer, Nimoy, and Mr. Whipple. OK, I was just testing you with that last name, but everyone else is present and accounted for and involved in making this a fun episode.

Classic Shatner Moment: Playing conspicuously drunk at a party, Shatner puts his arm around Nimoy and addresses him as Calvin Coolidge. It's the best of the few moments they share in 'Strigas Affair.'

Sneaky Shatner: Big Valley, 'A Time to Kill': The title of this first-season Valley is a little bit of sensationalist. Shatner is not a killer, but a possible counterfeiter and bank robber who comes into town to greet old friend Jarrod Barkley...and maybe do a bit more while he's there. Let's just say if I were the bank manager, I would be more suspicious when a newcomer opened up an account and was 'The first man I've had in here who knew exactly what kind of steel that vault door was made of. He even knew about our new electrical alarm system.' Oh, lots of men studied vault door construction and alarm wiring for purely recreational purposes in those days.

Classic Shatner Moment: After receiving an invite to stay with the Barkleys and unpacking his things, Shatner flirts a little with Audra (Linda Evans). Nothing really comes of it, despite my expectation the two would fall for each other and create even more complications, but we do see the old Shatner charm in effect.

Paranoid Shatner: Thriller, 'The Hungry Glass': The more famous of his two appearances on the Boris Karloff-hosted anthology is 'The Grim Reaper,' but this episode is the one that features Russell Johnson saying, 'Champagne for our real friends and real pain for our sham friends.' I guarantee you, whoever the wit was who said that at your last New Year's Eve party he wasn't as amusing as the future Professor.

'Glass' is a compelling tale of a young couple (Shatner and Joanna Heyes) who buys a house with a reputation among the locals for being haunted. At first, they laugh it off, but as they do a little housewarming with the realtor and his wife (Johnson and Elizabeth Allen), little things start happening. The episode is a slow build, with a scream here, an unexplained sighting there, and an increasingly chilling atmosphere.

The beginning of the show, featuring Donna Douglas as the original homeowner, seemingly removes much of the tension of what follows in modern times, but the score and effective use of the spooky setting combine to keep us hooked. Then there's Shatner's palpable discomfort. We learn he suffers from some form of stress disorder as a result of his service in Korea, which calls into question what's going on inside the dwelling. It's a fascinating harbinger of his Bob Wilson in 'Nightmare at 20,000 Feet,' but it's a great episode in its own right.

Classic Shatner Moment: His Gil Thrasher (talk about a classic Shatner name!) becomes agitated while grilling Johnson's realtor for 'the real story' about the house. His darting eyes and accusatory tone of voice make for a suitably disquieting scene.

Fatherly Shatner: Ironside, 'Little Jerry Jessup': Shatner is Marty Jessup, a convicted thief that his old friend Chief Ironside convinced to turn himself in. Marty's wife is shot to death by an intruder, and the theory is the killer was looking for money Jessup stole. Ironside had given Marty his word he would take care of his family, and now his wife is dead and his young son is in shock after witnessing the murder. Naturally the only way Ironside can make this right is by temporarily releasing Jessup from prison to help him find the killer.

Wait, what? Yep, that's what he does. It sounds unorthodox, but who are we to question 'the great Chief Ironside,' as Marty calls him while pounding a table and chiding the detective for wrecking his family? They make a great team as the episode juggles several threads: the search for the murderer, the effort to remove the titular youth's hatred for Ironside (Mitch Vogel gives a distinctive and affecting performance as Jerry Jessup), and the constant worry that Marty will just bolt from custody. This unique installment of Ironside means well, but I don't know if I'd find it as entertaining without Shatner's charisma.

Classic Shatner Moment: Even better than the aforementioned angry Shatner yelling at Ironside is his pleading to the Chief to allow him to take his son out for an ice cream cone. 'Well, I've--I've done a lot for you. The least you can do for me is...bend the rules a little.' His 'hey, come on' hand gesture and crooked smile are great here. Gee, Ironside, be a pal, will you? Sure, you've already released the guy from prison to walk around with his son, but the LEAST you can do is let him go across the street without police supervision to get dessert.

That's quite an array of relatively unseen Shatner, and it doesn't even include his Outer Limits appearance 'Cold Hands, Warm Heart;' his several appearances in Naked City, nor his many appearances that aren't yet on DVD. William Shatner is one of the most watchable television actors I've ever seen, and I'm always finding new surprises that add to my appreciation of his career.