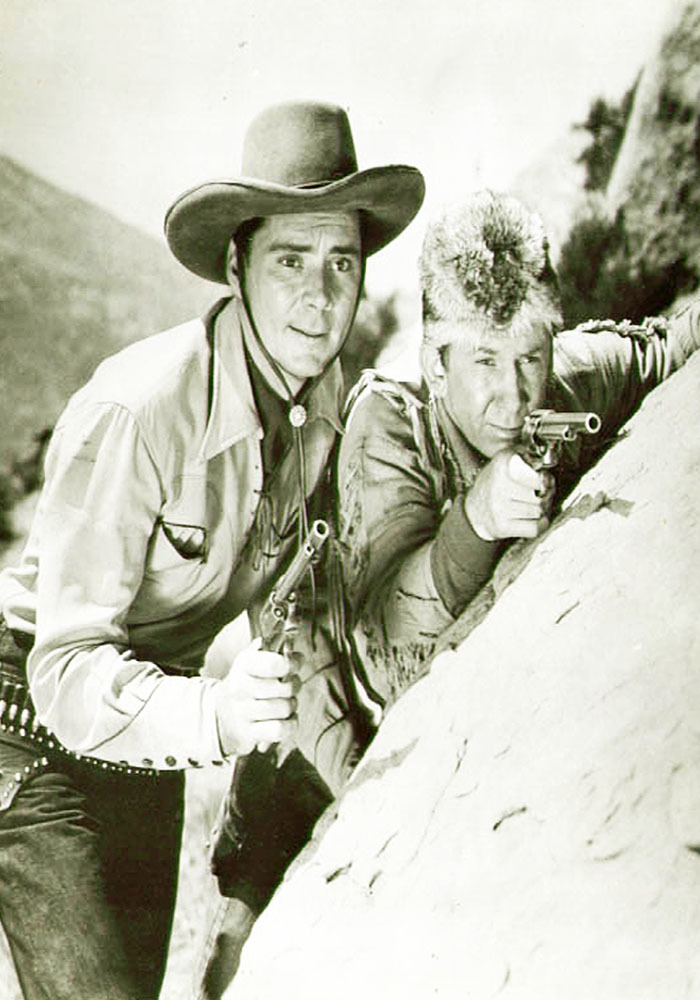 6 ft. 3 inch Russell Hayden was born Pate Lucid June 12, 1912, in Chico, CA. He later took the name Russell Hayden in honor of his friend, cameraman Russell Harlan. Russ had been a film cutter and production manager with no aspirations toward being an actor until Jimmy Ellison left the Hopalong Cassidy movie series and producer Harry 'Pop' Sherman told Russ he'd pay him ,000 a week to play Hoppy's sidekick, Lucky Jenkins. After 27 Hoppy Westerns at Paramount with William Boyd from 1937 to 1941, Hayden moved over to Columbia to co-star with Charles Starrett in eight B-Westerns in 1941-1942. Hayden was popular enough that Columbia assigned him his own series of eight films from 1942-1944.

After WWII service in the Navy, Hayden returned in 1946 to star in Universal's 13 chapter serial, Lost City of the Jungle. It was then that he starred in these four 'streamliners' for Screen Guild/Lippert. This series of four fast paced Hayden Northwoods/Mountie films are all a lot better than many historians give them credit for.

Neath Canadian Skies (1946 Screen Guild): Not a frame or minute wasted in this fast paced northwoods adventure as undercover Mountie Hayden helps pretty Inez Cooper fight off claim jumpers Douglas Fowley, I. Stanford Jolley, Kermit Maynard and Dick Alexander. This is the first of a brief Mountie 'streamliner' series starring Hayden and directed by old pro B. Reeves 'Breezy' Eason that all run only 40-45 minutes apiece.

Born in Atlanta, GA, in 1922, from 1941-1943 Inez Cooper had small roles in big pictures. Then she was top-billed in Wings Over the Pacific in 1943 but was unable to follow-up. Off-screen in 1944-1945, she returned in 1946 for two of these Hayden quickies. She's also in Riding the California Trail (1947) with Gilbert Roland and Border Treasure (1950) with Tim Holt. After a bit in John Wayne's Flying Leathernecks in 1951 she called it quits. Her husband was the L.A. manager of National Concert and Artists Corporation.

Where the North Begins (1947 Screen Guild): Russ Hayden brings redcoat justice to whiskey runners in 40 minutes. Steve Barclay is a Mountie working undercover in the gang of Cariboo, led by town boss Tris Coffin and whisky runners Anthony Warde, Keith Richards, Frank Hagney and Denver Pyle, but is discovered to be a Mountie and is killed by Coffin. Pyle's unwitting sister, Jennifer Holt, is then used by Pyle to throw investigating Mountie Hayden off their trail. Although writer James Oliver Curwood's name was used, the story was not based on any of his works.

Trail of the Mounties (1947 Screen Guild): It's another B-western case of double identity as Mountie Hayden investigates a series of fur robberies actually staged by his twin brother wearing a Mountie uniform to throw suspicion on Russ. (Even leading lady Jennifer Holt is confused.) Trail of the Mounties is a fast moving, 40-minute Lippert streamliner directed by Howard Bretherton, a prolific director of Westerns who gravitated to them after a period of making other types of program pictures at Warner Bros. and Monogram. After Paramount assigned Bretherton to Hop-A-Long Cassidy and several of the other good early Hoppys, he also helmed Westerns with Charles Starrett, Don Barry, Rough Riders, Bill Elliott, Johnny Mack Brown and Whip Wilson.

After the four Mountie films, Russ and Jimmy Ellison co-starred in six 1950 B-Westerns for Lippert (still available on DVD). Hayden starred in TV's Cowboy G-Men in 1952-1953, then produced (and often directed) TV's Judge Roy Bean (1956) with Edgar Buchanan and 26 Men (1957) with Tris Coffin and Kelo Henderson.

Married to actress Jan Clayton (best known for her time on TV's Lassie) from 1938-1943, Hayden married Lillian 'Mousie' Porter in 1946. Along with screen heavy Dick Curtis, Hayden helped develop Pioneertown, which became a popular filming location for big screen and TV Westerns in Southern California (including Judge Roy Bean). He and Lillian lived on the property until his death from pneumonia, June 9, 1981, in Palm Springs, CA.

Boyd Magers has been the editor and owner of Western Clippings for 21 years, focusing on Western movies, television and more.