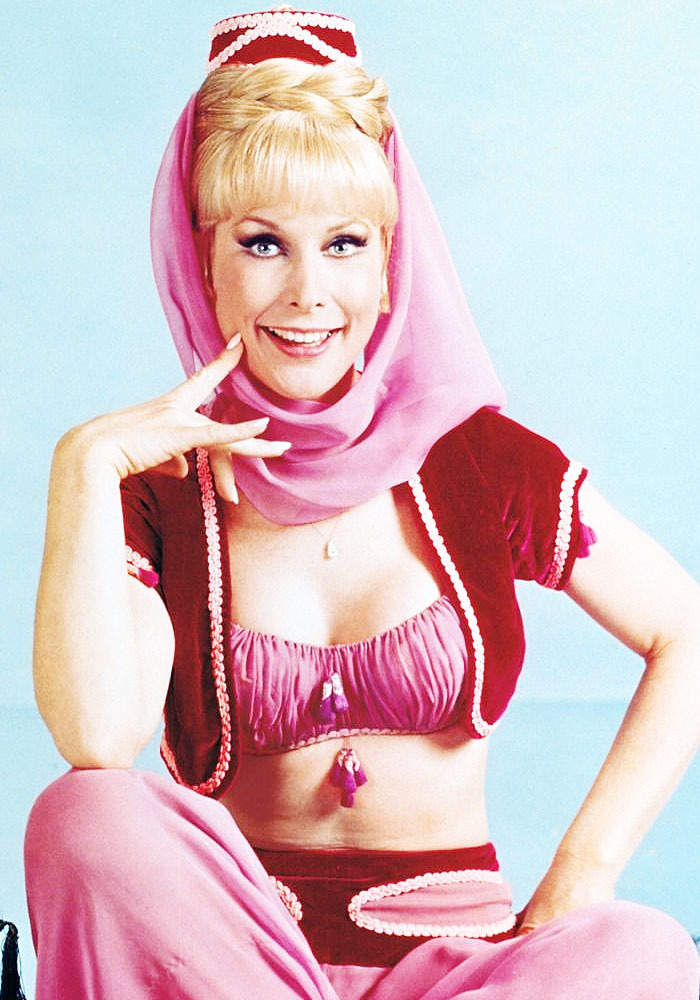 We often hear how brilliant television is today, but this is the 50th anniversary of one of the most remarkable years the medium ever had. The 1965-1966 season was loaded with classic programs, legendary performers, and memorable characters. While it's certain that nothing like Game of Thrones was around in 1965, I sure don't see anything like My Mother the Car right now.

In retrospect, 1965 was a significant year in television history for two main reasons. One is the sheer number of notable programs that debuted. Also, the '65-'66 season is considered the one in which color took over the prime time schedule; the first year the majority of network shows aired as such, though standbys like Perry Mason remained (but even it aired its only color episode before the season ended). Even NBC debuted one of the most famous sitcoms ever in black and white, I Dream of Jeannie, though it switched to color the next season.

Jeannie, of course, depicts the ongoing adventures of 2,000-year-old Jeannie (Barbara Eden), a powerful genie discovered by astronaut Anthony Nelson (Larry Hagman). Reportedly conceived by author Sidney Sheldon as a response to ABC's previous year's breakout hit Bewitched, Jeannie was not as successful, but it also became a perennial syndication favorite. Other high-concept comedies in prime time included My Favorite Martian, The Munsters, The Addams Family, Gilligan's Island, and The Flintstones.

Another notable debut was ABC's The F.B.I., a series not nearly as iconic despite its nine years and 240 episodes. The Quinn-Martin-produced procedural dramatized actual incidents from the agency's case files. Unlike Barbara Eden, F.B.I. star Efrem Zimbalist never battled censors over whether his belly button could be revealed.

ABC also introduced F Troop, airing Tuesday nights after McHale's Navy. F Troop, which also aired in black and white in its inaugural season before switching to color, showed wacky events at a post-Civil War army fort, with Ken Barry, Forrest Tucker, and Larry Storch as the officers. The broad spoof of Western and military culture remains popular despite lasting only two seasons.

Another military sitcom with an even larger impact debuted the same season. CBS broadcast Hogan's Heroes on Friday, September 17, 1965, and it went on to last six seasons. It's a comedy based on the idea that a group of POWs are helping the Allied cause through their de facto headquarters at a Nazi camp. Much has been written over the years about the audacity of setting a frivolous program at such an appalling locale, not to mention the irony of Jewish actors like Werner Klemperer portraying Nazis. Viewed with modern eyes, it's a ludicrous premise, but if you go back to 1965...well, it was ludicrous then, too, if not offensive, yet it's also hilarious.

The military was a ripe source of material; also in prime time were Gomer Pyle, Twelve O'Clock High, and Combat. They were joined by one (season)-and-done newcomers Wackiest Ship in the Army, Convoy, and Mr. Roberts.

Preceding Hogan's Heroes on Friday nights in 1965 was another new effort: The Wild Wild West, yet another new series beginning in black and white but changing to color afterwards. This action-packed Western combined gadgets, exciting villains, and intrigue, as stars Robert Conrad and Ross Martin kept the President and the entire United States safe.

Speaking of action and colorful villains, this season, specifically midseason, gave us the Batman craze when ABC showed two episodes of the Caped Crusaders' adventures each week starting in January 1966. I wrote about the series in my review of the Season 1 DVD, but it's worth repeating that Batman was a pop culture phenomenon epitomizing the two main traits of this television season: new programs and vivid color.

A few other short-lived new series also had impact beyond their contemporary success. Anne Francis wowed viewers as private eye Honey West, which was canceled after one year but remains a cult favorite. Another new female-driven half-hour was Sally Field's breakthrough as plucky teenager Gidget. Personally, I prefer West's pet ocelot Bruce to Gidget's 'pet' Moondoggie.

Perhaps the best of the rural comedies of the 1960s, Green Acres, debuted September 15, 1965, lasting six seasons. Executive Producer Paul Henning (and actual showrunner Jay Sommers) took this one in a much more surreal direction than his Beverly Hillbillies and Petticoat Junction (also on CBS at the time), and to me that's why it holds up best fifty years later. Other classic sitcoms in the broadcast lineups this season: The Andy Griffith Show, The Lucy Show, The Farmer's Daughter, The Adventures of Ozzie and Harriet, The Patty Duke Show, and The Donna Reed Show.

CBS introduced another classic in 1965: Lost in Space, the Irwin Allen series about the adventures of the Robinson family as they journey through the cosmos. Allen's Voyage to the Bottom of the Sea (which switched to color this season) was already on ABC, but the producer kicked up the sci-fi a notch with this one, set in the sophisticated, technologically advanced distant future of 1997.

NBC's My Mother the Car hit the small screen in 1965 and became the butt of jokes for decades. Sure, the concept of a guy's mother coming back as a 1920's Porter automobile to meddle in his life is absurd, but it's the execution of a concept that matters. From a season which gave us costumed crime fighters, a family of outer space explorers, and perhaps most improbably, Burl Ives as the richest man in the world (new NBC sitcom O.K. Crackerby), everyone jeers Ann Sothern as a talking car?

The Dean Martin Show began its run on NBC in 1965, and another hard-drinking, seldom-rehearsing superstar still had his program on CBS: Jackie Gleason. Other superstars with variety shows this season included Ed Sullivan, Red Skelton, and Danny Kaye. Hollywood Palace offered more entertainment on Saturdays, and this was the season Bob Hope's popular NBC specials began broadcasting in color. Panel shows like What's My Line, I've Got a Secret, and To Tell the Truth still hung on.

Westerns were not as popular in 1965-66 as in seasons past, but NBC's Bonanza was still the top-rated series on TV. Other veteran oaters included Rawhide, Branded, The Virginian, Daniel Boone, and of course Gunsmoke (Gunsmoke was always on). The most notable new Western was The Big Valley, headlined by Barbara Stanwyck and dealing with the Barkley clan, and also premiering was Laredo, featuring the exploits of the Texas Rangers.

Major changes took place on the TV schedule. NBC experimented with Dr. Kildare, splitting the medical drama into half-hour installments airing Mondays and Tuesdays. My Three Sons moved from ABC to CBS for season six, marrying off oldest son Mike and adding Ernie, who was adopted into the Douglas family to avoid a change to My Two Sons. Also, when William Frawley bowed out due to health issues, housekeeper/father-in-law Bub was replaced by Charley O'Casey, played by the great William Demarest -- perhaps the only man who could step in for Frawley and not be a letdown. This is quite possibly the single best cast replacement in sitcom history.

Much less effective were the wholesale changes that occurred when Hazel moved from NBC to CBS. Off camera, her employers the Baxters left for the Middle East due to some business George had out there, inexplicably leaving son Harold behind. Live-in maid Hazel and Harold moved in with George's younger brother Steve and his family, and while they tried hard, they were no Baxters. Even the addition of Ann Jillian couldn't quite bring this final season up to the level of the previous four.

Perhaps the most radical change of an existing show in 1965 came when the Burke of Burke's Law switched professions from police captain to government spy as the series became Amos Burke, Secret Agent. The move was not a success, but it reflected the spy craze gripping the culture in the wake of James Bond. Come to think of it, I'm surprised Hazel didn't become George Baxter, Secret Agent. That would have explained that sudden uprooting to 'the Middle East.'

More spies invaded prime time when Robert Culp and Bill Cosby, under the cover of a 'tennis bum' and his trainer, traveled the globe carrying out important missions on NBC's I Spy. The series is perhaps best remembered for Cosby's role as the first African-American lead in a network drama (arguably a comedy-drama), but it is fun watching today for the excellent chemistry of the leads and the location shooting.

NBC's hit The Man From U.N.C.L.E also helped instigate the spy mania that led to Buck Henry and Mel Brooks creating the classic spoof Get Smart. A promotional film released by NBC to tout the new fall season, hosted by star Don Adams, is a good indication of the network's high hopes for the show (and one of the NBC selling points, as Adams proudly mentions that 'practically all' the NBC programs are in color).

After an experiment in fall 1965 shrunk the number of awards, the Emmys returned in May 1966 to honor the work of this season. Big winners were The Dick Van Dyke Show (Outstanding Comedy Series) and The Fugitive (Outstanding Drama Series). If arguably the greatest sitcom and the greatest drama of all time are representative of a particular television season, that's a quality year. Additionally at the Emmys, The Andy Williams Show won Outstanding Variety Series, Van Dyke and Mary Tyler Moore won lead comedy acting awards, and the top dramatic prizes went to Cosby and Stanwyck.

Another winner at the 18th Annual Emmy Awards was A Charlie Brown Christmas, recognized as Outstanding Children's Program after debuting December 9, 1965. The holiday staple drew a big audience and critical acclaim, but it was edged by Bonanza. (Nothing beat Bonanza that year.)

Speaking of children's programming, one aspect of television that was indisputably superior 50 years ago was Saturday mornings. The big premiere was The Beatles, which was silly, cheap, and didn't even feature the real speaking voices of the Fab Four...but was still awesome. ABC became ratings leader Saturday mornings on the strength of this smash.

ABC also gave kids The Milton the Monster Show, while NBC introduced original Hanna-Barbera cartoons Atom Ant and Secret Squirrel, but CBS may have had the best roster: Heckle and Jeckle, Tennessee Tuxedo, Mighty Mouse, Linus the Lionhearted, Tom and Jerry (the first time the theatrical shorts aired Saturday mornings), and Quick Draw McGraw. Other animated superstars on the networks included Underdog, Top Cat, The Jetsons, Casper, and Looney Tunes -- all on free over-the-air outlets, unlike today where kids need cable for their weekend cartoon fix.

Late nights, Johnny Carson was several years into his Tonight Show run on NBC, opposed only by Les Crane on ABC. The big daytime premiere was long-running soap opera Days of Our Lives on NBC, but The Dating Game also debuted at midseason as part of ABC's lineup.

It may be folly to compare modern television to the medium as it existed 50 years ago, but I will go ahead and say it: Broadcast television was a lot better in 1965-1966. Even with only three networks, prime time presented a host of iconic new shows; currently neglected genres like variety, Westerns, and panel shows; and legendary mainstays each night of the week.