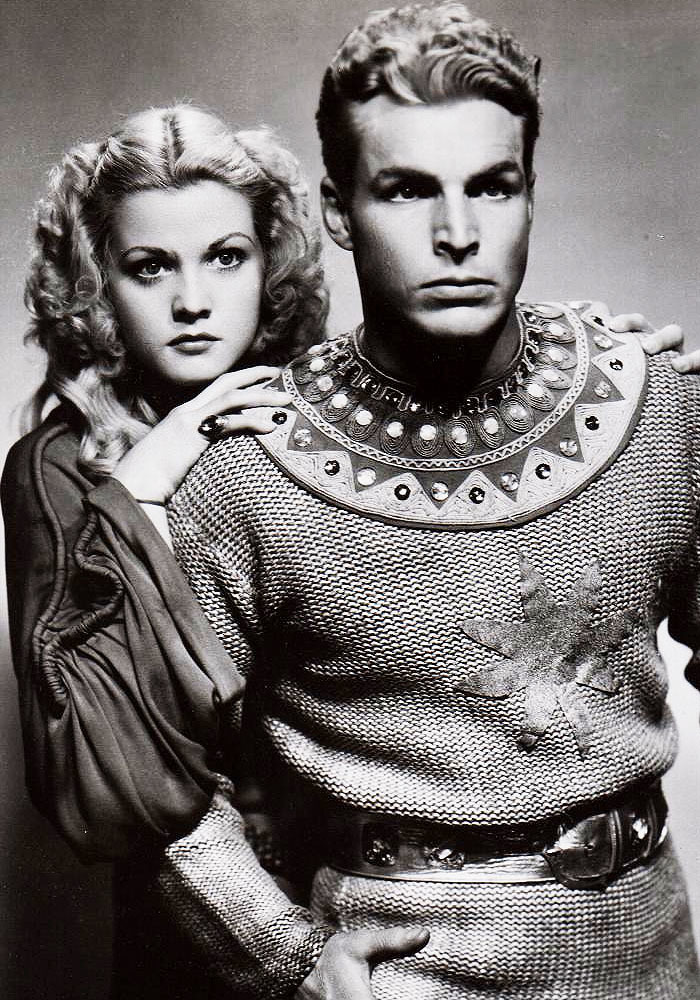 After three attempts by Ming the Merciless to either enslave the Earth, destroy all human life on it, or otherwise make a nuisance of himself, our planet was relatively safe for the next several years (WW2 notwithstanding) until 1945, when -- no doubt suspecting we would be an easy target following the worldwide conflict that had just ended -- Mars invaded the earth led by one of Ming's successors in The Purple Monster Strikes (1945).

A famous astronomer, Dr. Cyrus Layton, sees a strange meteor land near his observatory (called the Scientific Foundation, and brilliantly portrayed by Griffith Observatory). The meteor is actually a ship from Mars, and Dr. Layton greets its lone occupant, Earth's first interstellar visitor, warmly. The good doctor advises his guest that he, too, has been working on a rocket ship capable of interplanetary travel, and shows him the plans. 'This is the PROUDEST DAY of my life!' Dr. Layton gushes. 'Unfortunately, it's also the last day!' the Martian sneers.

Turns out he's none other than the Purple Monster, vanguard of a massive invasion force that is going to bring the full brunt of superior Martian technology against the Earth. Uh, well, that is, as soon as they get their hands on Layton's plans, because Martian rocket ships can only crash; they can't take off again and return to Mars. The Purple Monster kills Layton with Martian gas, and then turns himself into a phantom, assuming the scientist's body.

The Purp enlists the assistance of American gangsters to help him get the various doodads he needs to complete the ship he's building in the observatory basement. They're thwarted at every turn, thankfully for us, by dashing hero Craig Foster and Sheila Layton, the professor's lovely niece, neither of whom suspect the Purp they are battling and the Uncle they are consulting are one and the same.

There's also a brief appearance by the lovely Mary (Mrs. Clayton) Moore, as a second Martian emissary who joins the serial halfway through to give us a really, really special catfight with leading lady Linda Stirling.

Besides the fact that Martian flight technology has only advanced to the 'crash' stage, there are some other humorous plotholes on the serial's road. The Purp's gangsters are dedicated to him for no apparent reason; there's certainly nothing in it for them. And when the Purple Monster calls the Emperor of Mars on his official Republic Studios interstellar walkie-talkie, he introduces himself as 'The Purple Monster.' You would think his Martian name would be Xandor'r or 37890-X or Gordon Shumway or something, but no. Apparently tossing back a few Martian brewskis with his buds back home, he's still called the Purple Monster.

Our Martian enemies licked their (green-blooded) wounds for a few years and then launched another massive attack (again, with just one guy) in 1951's Flying Disc Man from Mars. This time, Mota the Semi-Merciless has a flying saucer and a bevy of former Nazi-sympathizer scientists to aid him in his plot, but as with The Purple Monster, most of the time is spent robbing banks and stealing from laboratories. It seems the Martians are one-A in scientific know-how and four-F in strategic thinking.

By the 1950s, theatrical serials were so low on the cinematic totem pole that the 'stars' of this thing are Gregory Gay, Lois Collier, and Walter Reed. 'A comparison between Flying Disc Man from Mars and The Day the Earth Stood Still, released the same year, throws the Republic serial's lack of imagination into even sharper relief.' -- Roy Kinnard, Science Fiction Serials. He's being kind.

With Mars having been effectively vanquished for the moment, the crack Republic Studios filmmakers turned to a more dangerous (and closer) foe in Radar Men from the Moon (1951). Retik, leader of the Moon Force (and wearing the Purple Monster suit) thinks our planet is ripe for the plucking, not reckoning with the amazing Commando Cody, Sky Marshall of the Universe, courtesy of stock flying footage from King of the Rocket Men (1949).

The Sky Marshal of the Universe job title seems to be largely symbolic. Cody doesn't patrol the airways with a fleet of heavily armed, brutally efficient sky deputies at his side, surfing the solar winds as he snuffs out all those who would stand in his way of preserving peace and tranquility. He does, however, have two fairly loyal office assistants. When a series of explosions rock America's defense systems, the U.S. calls on Cody to investigate. Cody, with absolutely no evidence or information presented to him, immediately guesses the attacks are coming from the moon. The government agent agrees and Cody and his pals are off on their wacky adventure, piling into a rocket shop equipped with office furniture.

At first, Cody's curvaceous assistant Joan is instructed to remain on earth because of the danger, but she rightly points out that if she doesn't come along, the men won't have anyone to make coffee for them, so Cody, evoking his powers under the charter of the Sky Marshals union, grants her request. Inasmuch as the moon is only approximately 239,000 miles from the earth, Cody's rocket makes the trip in about three or four minutes, and - in a happy coincidence - just happens to land a few yards from the lunar city, which is movingly portrayed by the lost city from the early Republic serial Darkest Africa. Twelve chapters of relative excitement follow before Cody has to hurry home for another invasion from Mars, Zombies of the Stratosphere (1952), notable only because Leonard Nimoy plays one of the Martians. Who could ever believe Nimoy as a guy from another planet?

This time, the Martian leader is called Marex. The Martian warrior leads his hardy band of two guys to Earth, where they plan to explode an H-bomb that'll send our planet hurtling out of its orbit and into deep space. Mars can then move their planet into the vacated space, sort of as a sub-lease, so they can enjoy a more temperate climate. Over the next 12 chapters, Marex and his men (he's got some earth thugs working for him, too) will try to gain the parts they need to complete their H-bomb device, and Rocket Man will work to prevent them while dodging stock footage perils from Mysterious Doctor Satan, Spy Smasher, Dick Tracy, and other vintage Republic serials, all of which are as jarringly out of place (a submarine? Cowboys in a desert a mile from the ocean? A scientist racing a train with a tank?) as stock footage can get.

While Mars and the Moon kept Republic's serial heroes busy, over at Columbia, they had their own post-War interplanetary problems.

Brick Bradford (1947), based on a once-popular newspaper adventure comic strip, and gives us the two-fisted titular hero battling an invasion from the Moon in a cartoon flying saucer. Brick is no slouch when it comes to transportation devices, either: he's got the Time Top, which allows him to go off and punch 200-year-old pirates when he gets tired of the moon men.

Columbia next turned to literature even classier than comic strips, Jules Verne's classic Mysterious Island, for sci-fi fun. While the basic story outline is in place: Union soldiers escape from a Confederate POW camp in the 1860s and meet Captain Nemo on an island full of strange perils (the 1961 film version is a true classic), Columbia threw in Rulu, Witch Queen of the planet Mercury, intent on invading the earth with her henchmen dressed in leftover costumes from Flash Gordon Conquers the Universeand The Spider's Web (and driving around in Brick's Time Top).

Serials were often based on comic strips, radio shows, or pulp heroes, but only one was based on a TV show, and in fact, it was the first TV series to be adapted for the big screen: Captain Video (1951). Vultura, a beer-bellied villain wearing some sort of ancient Roman armor with his huge gut hanging through, leads the planet Atoma in war against the Earth. He's aided by shifty earth scientist Dr. Tobor, but Cap'n Video and his Video Ranger are more than a match for them, even though Vultura has reactived the cowboy-hatted robots from The Phantom Empire to help him. For added excitement, each planet visited by Cap'n Video over the 15 chapters of the serial is tinted a different color. Now THAT'S art for you.

By the mid-1950s, the motion picture serial had been supplanted by TV shows and was clearly expiring; anti-Earth elements made one final attempt to invade our world from The Lost Planet (1953), but the mastermind behind it was an earthling, Dr. Grood, who has enslaved the planet Ergro and is raiding it of its scientific marvels to force earth to surrender and recognize the United Planet of Groodovia (or somesuch). Despite a truly dizzying array of super-scientific devices like the thermal-disintegrator and the stellarscope, Grood's plans are foiled and apparently Mars and the Moon both gave up an earth invasion as not worth the trouble. We've been safe ever since.