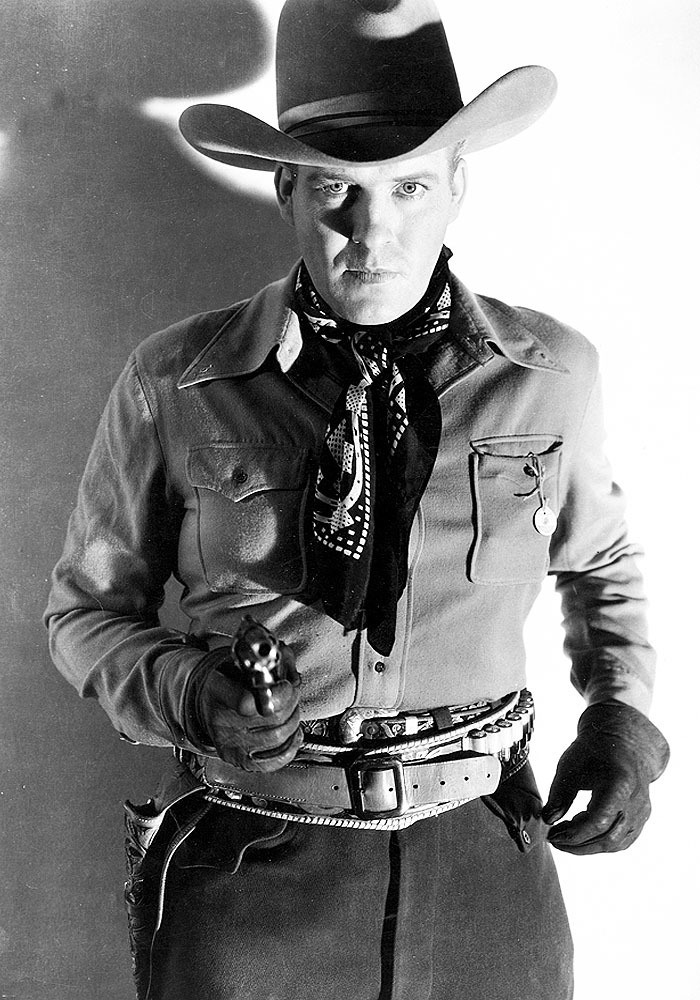 The Old Corral: The Career of Dick Foran

It's with great pleasure we welcome Warner Bros.'s Dick Foran Western Collection, a terrific, long overdue four-disc, 12 feature film DVD box set. Produced in 1935-1937 these B-Westerns are not only entertaining but historic in that they were made simultaneously with the man who began the singing cowboy craze at Republic, Gene Autry.

Because Gene was just beginning his meteoric rise to fame, Foran's westerns aren't so much in competition with Autry's, even though they run a parallel course, because Warner Bros. offered better production values and Foran's booming baritone singing style was completely different than Autry's. Gene's voice was an off-shoot country/blues while Foran's was closer to Dick Powell and Nelson Eddy's musicals, but more relaxed. As for production values, Autry's early B-Western budgets ranged from 0,000 to 5,000 (as noted in my book Gene Autry Westerns), while Foran's WB budgets were in the 6,000-9,000 range, more than twice that of Gene's.

6'2' Foran born in Flemington, New Jersey in 1910, studied geology at Princeton while studying theatre and playing on the football team. He later studied music in New York and became a singer with several big bands in the early 1930s. After a few small roles, mostly at Fox, Warner Bros. signed Dick for this series of Westerns.

Ads for Foran's first, Moonlight on the Prairie shouted, 'A new star in the saddle to spur you to cheers and stir you to song! Different! Dangerous! Quick on the trigger! Ready with a song! Six-feet-three of hard galloping, heart-walloping cowboy...riding high, wide and handsome to stardom!' Billed as the 'first of the new Warner Westerns,' it was WB production supervisor Bryan Foy's decision to get back into series westerns, a genre they'd abandoned since the 1932-1933 John Wayne Westerns which were mostly remakes of their Ken Maynard silents. Foy, at first, sought out WB leading man Lyle Talbot who had a good but seldom used singing voice, but Talbot declined as he was not fond of horses.

Foy then turned to Foran who possessed a trained singing voice and projected a likeable personality. Although the Foran westerns have solid production values and the benefit of strong casts, what Warner Bros. never got right was what historian Les Adams called 'that self-taught, down-home, Mama-and-all-them brand of Americana so easily and naturally projected by Gene Autry, Tex Ritter and Roy Rogers among the singers, and John Wayne, Buck Jones, Bill Elliott and Johnny Mack Brown among the straight action performers.'

William Jacobs' screenplay for the first Foran Western has Dick blamed for a killing he didn't commit. Learning the murdered man's son, little Dickie Jones (and his Mom), will lose his father's ranch unless he occupies it by midnight and stays on the property until he's 21, Foran pitches in to help, eventually rooting out ranch foreman Joe Sawyer and his boys as the real killers trying to prevent Dickie from inheriting the ranch so Sawyer can grab off the spread. Foran's sidekick (he didn't have a steady one as most B-western stars did) is always-hungry George E. Stone. For no other reason we can see than Warners was building up his popularity with plans in mind for starring roles, Gordon (Bill) Elliott has a small role as a cattleman's investigator.

In Treachery Rides the Range, Cavalry Captain Foran breaks up a scheme to force Indians to break a peace treaty so illegal white hunters can slaughter the buffalo.

California Mail sees Dick and his father vying with no-gooders for a lucrative mail contract.

Belting out his signature song, 'The Prairie is My Home,' Dick is hell-bent for thrills riding with the Texas Rangers to bring law and order to a gang of horse rustlers in Guns of the Pecos.

When his father is murdered by rustlers in Land Beyond the Law, young Dick becomes Sheriff of a lawless town in New Mexico. Supposedly a remake of Ken Maynard's Land Beyond the Law (1927) and John Wayne's Big Stampede (1932) but only the barest essentials are evident. A young Wayne Morris is Foran's best friend. At their best, like this one, the Foran films came as close to hitting the mark in the mix of real and fantasy world west of Gene Autry as any other singing cowboy series. At times wildly unrealistic, but pure musical cowboy entertainment. This one has absolutely everything that's worthy in a top flight B-western -- fast paced, thrilling action, a rousing original music score, a pretty girl, a smart horse -- Smoky, nefarious badmen, rescues, chases -- all extremely well put together by director B. Reeves 'Breezy' Eason.

Cherokee Strip is the well remembered B-western in which Foran sings young Tommy Bupp the lullaby 'My Little Buckaroo.'

In Blazing Sixes Foran and pal Pee Wee (Glenn Strange) as undercover government agents are out to capture 'respected citizen' John Merton and his desperadoes who rob gold shipments sent from the mint to local banks, smelt it down and ship it out of the country.

In Empty Holsters Foran is railroaded into prison for five years just because lecherous badman Ace Cain covets the same gal as Dick.

Framed for a murder he didn't commit in The Devil's Saddle Legion, Foran is thrown onto an illegal dam building gang by badmen who are building the dam to change the course of the Red River, taking land away from Texas and giving it to a ranch in Oklahoma. And that's only the basics of a very convoluted plot! But it all moves so fast there's little time for you to figure it all out.

Prairie Thunder, the final Foran B-western, has a 'wrap-it-up' cheap feel to it from the overuse of Indian-raid stock footage from Ken Maynard silents. Army scout Foran is assigned to duty along the telegraph lines to combat outlaws stirring up the Kiowas to fight the intrusion of the singing wire and the iron horse frightening away the Indians' buffalo so they may gain a monopoly on goods brought into the area.

Although Foran's westerns did respectable business, Autry was becoming a Depression era sensation, so Warner Bros. threw in the towel after 12 well-made, enjoyable B-westerns.

This set of westerns boasts excellent transfers and some unpublicized supplements. All 12 feature the original theatrical trailers. There's also the seldom seen Sunday Roundup, a 1936 Technicolor two-reeler that stars Foran as a parson trying to increase his congregation by hiring vaudeville acts to put on a show at a local saloon only to find himself opposed by a crooked saloon owner. Terrific bonus material you don't usually find on Warner Archive releases.

Boyd Magers has been the editor and owner of Western Clippings for 21 years, focusing on Western movies, television and more.