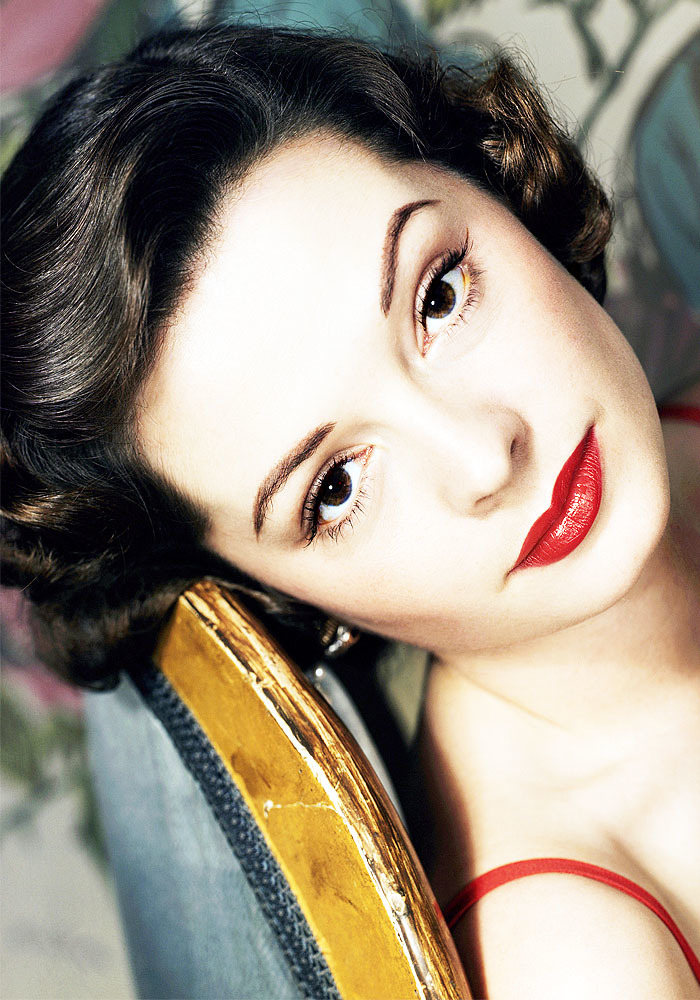 There's a lot to love about film noir. The oh-so-quotable dialogue. The shadowy, rain-swept, urban locales. The edge-of-your-seat plot twists.

But one of the best things about noir is the femme fatales. Beautiful, mercenary, conniving, intelligent, sexy, and always out for number one, the femmes of film noir were -- as my mother would say -- a whole 'nother thing. Film noir is practically brimming with these fierce femmes; like any noir lover, I have my favorites, and I have my reasons for those favorites. Above all, I'm most fond of those duplicitous dames who embrace their evil proclivities and never let them go -- there's no heart of gold buried far beneath the layers of malice, no reluctant conscience that rears its head in the last reel. No, I love the dames who'll look you in your eyes, impale you with a sensuous kiss, and then plant a knife squarely in your back. These two are just a taste of what femme fatales have in store.

The grandmama of them all, Kathie Moffat (Jane Greer) has a bad rep long before we ever catch sight of her raven-black hair and deceptively appealing smile in Out of the Past (1947). Meanwhile, via flashback, we learn she allegedly shot her lover, Whit (Kirk Douglas), stole 0,000 from him, and fled for parts unknown. We also discover Whit has hired private dick Jeff Bailey (Robert Mitchum) to find her and bring her back.

Out of the Past is filled with twists and turns and plot machinations that you have to listen very carefully to follow (and sometimes even that doesn't work), but it's never dull. One of the reasons it never lags is due to Jane Greer's Kathie. From the moment she steps out of the sun and into the cool of a Mexican cantina, we suspect she's not to be trifled with. And we're right. Without much effort, she convinces Jeff that she didn't steal a single dime and she only shot Whit in self-defense.

As Jeff falls for her charms - hook, line and sinker - he manages to convince himself that she's as guileless and innocent as he wants her to be, but he's no longer able to keep up the charade when, during a fist fight with his former partner, Al Fisher (Steve Brodie), Kathie fatally shoots Jeff's opponent. ('You wouldn't have killed him,' Kathie explains, fully confident that this is enough of a rationale for the murder she's just committed. 'He would have been against us. Gone to Whit.') And just minutes later, after Kathie bolts into the night, Jeff experiences the second blow of the evening when he discovers Kathie's bank book, containing an entry for the 0,000 she'd denied taking from Whit. And with that, Jeff's Kathie-coated, rose-colored glasses lose their luster.

But this isn't the end of Kathie's misdeeds. When Whit later hires Jeff for one last job, Jeff learns Kathie has returned to her former lover. By now, though, he appears to be immune to her peculiar fascination, even telling her: 'You're like a leaf that blows from one gutter to another.' Still, Jeff's cynical and bitter stance has little impact on Kathie -- she continues her devious maneuvers, complemented, as always, by her feminine, fatal wiles. She turns on the charm full force in one scene, assuring Jeff she's never stopped loving him: 'I was afraid and no good, but I never stopped, even if you hated me. Did you?' She does everything but bat her eyelashes.

To Jeff's credit, while he appears to once again be dazzled by Kathie's unique brand of allure, he actually is completely impervious, but his revelation about the real Kathie behind the beautiful mask comes a bit too late, and Kathie remains in control to the end. (And when I say end, I mean it.)

If Kathie Moffat is the grandmama of the femme fatales, Sherry Peatty (Marie Windsor), of The Killing (1956), is the great-aunt. Directed by Stanley Kubrick, The Killing tells the story of a well-laid plan that goes awry -- in this case, it's an intricately designed racetrack heist carried out by a motley crew of crooks and would-be crooks. One of these, mild-mannered racetrack cashier George Peatty (Elisha Cook, Jr.), is married to Sherry, who might be commonly known as a 'piece of work.'

Blonde and buxom, Sherry towers over George, not just physically, but emotionally as well. Within minutes -- no, seconds -- of seeing these two together, we wonder how such a sawed-off loser could have possibly attracted this woman, and what on earth she sees in him. Our curiosity is satisfied when George himself asks his wife why she married him, and Sherry responds: 'You made a memorable statement . . . something about hitting it rich, having an apartment on Park Avenue and a different car for every day of the week.' And then she facetiously adds, 'Not that I care -- as long as I have a big, handsome brute like you.'

Turns out that after a half-decade of marriage to Sherry, George finally has an ace up his sleeve -- one he can convert to cash. But when he initially refuses to divulge the details of his money-making enterprise, Sherry uses one of the many weapons in her arsenal; rather than use her substantial sensuality as a convincer, she instead employs the triple threat of cold-shoulder-plus-guilt-trip, with a dollop of not-so-veiled threat: 'Don't be surprised if I'm not here when you get home. Don't be at all surprised,' she says. 'You have no use for me. You say you do, but when it comes to a showdown or proving it, you say one thing and then you do the opposite.' It's not long before George is spilling just enough of the beans to pique Sherry's interest -- and just enough for her to suggest to her lover (yes, her lover) that he seize the entire take from the heist.

In an effort to learn more about the scheme, Sherry takes matters into her own hands, boldly crashing the meeting George has with his co-conspirators. When she's caught snooping, she coolly tries to bluff her way out of the situation, but the gang's leader, Johnny Clay (Sterling Hayden), isn't fooled, and quite accurately assesses her character: 'You got a big dollar sign where most women have a heart,' he says.

Ultimately, however, Sherry's greed turns out to be her undoing. And while it comes in a manner she least expects Sherry is the defiant, razor-tongued femme to the end, telling George he was 'not a real husband. Not even a man. Just a bad joke without a punch line.'

The world of classic film noir is liberally -- and, for me, happily -- peopled with double-dealing dames such as these. Kathie and Sherry (funny how these toxic, twisted sisters have names which conjure images of pigtails and lemonade stands) are only the tip of the fatale iceberg. Stay tuned for future posts where I'll take a look at some of my other femme fatale faves!