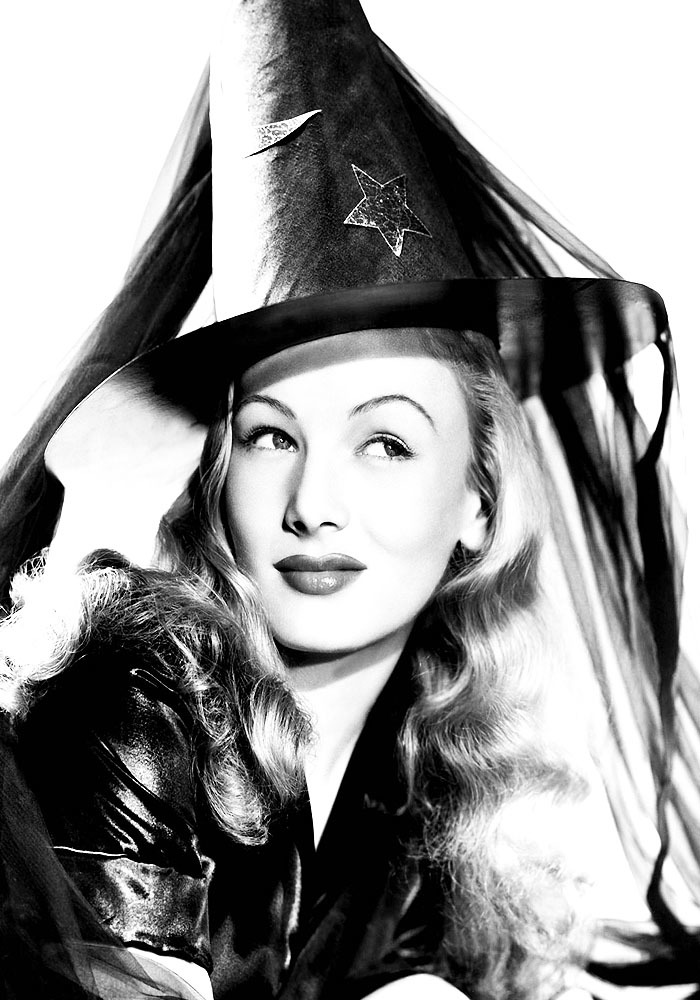 Halloween rivals Christmas in terms of the amount of films one can consume in celebration. Each year in October I do my best to take in as many chilling, spooky, and frightening films as I can. I've done it so often I've instituted themes, just so I can try to find newer films to add to the canon. In this inaugural discussion, I'll list nine mainstays of my Halloween viewing that, I hope, you'll enjoy. Now you won't see the requisite Dracula's and Frankenstein's; these will take you off the beaten path, the B-team, so to speak. Feel free to give me your own recommendations in the comments!

The Uninvited (1944) - Haunted house films are probably my favorite subcategory in the horror genre. Maybe it's because you're watching films about a haunted house in your own house (preferably alone and in the dark). The Uninvited is a sophisticated tale about a haunted house and the brother and sister (Ray Milland and Ruth Hussey) who purchase it. Much like other haunted house tales the house has a mysterious backstory involving death and possession that inspired films like the moody Gothic tale, Dragonwyck (1946).

I Married a Witch (1942) - My bio at the bottom mentions my love of Veronica Lake, so I'd be remiss if I didn't mention her greatest work in any genre! I Married a Witch Isn't a horror film per se, but a romantic comedy involving a witch (Lake) seeking revenge on the family who burned her at the stake. Thus she torments prospective governor Wallace Wooley (Fredric March), the offspring of the original Wooley who wronged her. Along the way our witch, Jennifer, has to deal with her drunken warlock father (a delightful Cecil Kellaway), and Wallace's irritating fiancee (Susan Hayward as the second fiddle). With a witty script by Preston Sturges and magical, fairytale direction by Rene Clair, this is a fun one for those looking for more than spooks and scares.

House on Haunted Hill (1959) - One of the quintessential haunted house tales, this is one of two great works by gimmick master William Castle. With a cast including horror favorite Vincent Price, as well as Richard Long and Elisha Cook, Jr., House on Haunted Hill creeps you out while making you smile at the way jump scares are employed. The story involves a group of people, some more money hungry than others, who decide to stay the night in a notoriously haunted house. Although eclipsed by the moodier The Haunting (1963), a classic in its own right, House on Haunted Hill takes you back to watching old horror hosts introducing films just light enough to keep you from having nightmares, but spooky enough to make you question what's hiding in the dark.

Cat People (1942) - This list wouldn't be complete without something from horror producer extraordinaire, Val Lewton. It's hard narrowing the list to one Lewton film, but Cat People utilizes horror and folklore as a means of discussing religion, foreignness, sexuality, and gender. Suffice it to say it more than lives up to its title and more. Following a young newlywed (the beautifully mysterious Simone Simon) and her fear of turning into a cat person of the title, we question throughout whether Simon's Irina will really become a cat person, literally, and what it means figuratively. Lewton, whose use of scare tactics coined the term 'Lewton bus,' creates some amazingly creepy compositions, including a moment in a swimming pool that's as gorgeous as it is frightening. The in the name only sequel, Curse of the Cat People (1944) is just as wonderful, although it's more of a mystical children's drama definitely worth a look.

The Bad Seed (1956) - Some of the funnest horror films are the hokiest. The Bad Seed explores the psychological concept of the nature vs nurture in regards to child murderers. And there's no child murderer as perfectly constructed as Rhoda Penmark (Patty McCormack). Little Rhoda ends up being the prime suspect when a school chum ends up six feet under. But who could suspect the little girl with blonde pigtails who curtsies? The psychology may seem pedantic, but the performances are killer (pun intended). McCormack plays a little girl you love to hate, while Nancy Kelly is her long-suffering mother. The film is over the top, particularly with its child star, but it's such fun to watch with its questions of suburban perfection.

Creature From the Black Lagoon (1954) - Out of all the Universal monsters I've always found the tale of the Gill Man to be my favorite. Not to disparage Frankenstein, Dracula, and the Mummy, but the Gill Man is a character who could only work in the 1950s where kitsch and metaphors converged. Creature From the Black Lagoon boasts some great underwater photography for 1954 and makes you fear getting into the water long before Steven Spielberg did. It may not have the longevity of the other Universal films, but it's such a perfect encapsulation of the 1950s horror film.

Night of the Living Dead (1968) - How do I feel about zombies, you ask? I love them enough to put the father of them all -- the granddaddy is the Bela Lugosi film, White Zombie from 1932. George Romero's zombie film tells of a group holed up in a farmhouse as hordes of the undead come looking to feast on their brains. The story is simple, but the climax puts a melancholy end on things, most likely due to the gory world of racial tensions that personified 1968. Night may be cheesy, especially in the scenes of the zombies feasting on what looks like chicken slathered in chocolate sauce (newsflash, it was), but the charged atmosphere of the inhabitants in the house aids in heightening the tension and the horrors of what's waiting for them outside.

Freaks (1932) - I feel bad listing Tod Browning's Freaks as a horror film since Browning tried his hardest to turn the world of circus performers into a tale of sympathy and community. Unfortunately, the studios only saw a group of, as the title implies, 'freaks' and thus Browning tries his utmost to mitigate both schools of thought. The film follows a group of circus performers and what happens when the diminutive Hans (Harry Earles) marries the beautiful Cleopatra (Olga Baclanova) who only likes Hans for his money. Browning used real circus sideshow performers, all of whom are presented as sympathetic people who don't want pity. But when one of their own is wronged, whoo then you get a thunderstruck climax that you have to see to believe. Freaks frightens more in the sense that it is the so-called 'normal' people who hurt others more than those perceived as different. The film may have ruined Browning's career, but it created a wholly unique film.

Carnival of Souls (1962) - Putting this on the same list as Night of the Living Dead is kind of in poor taste considering George Romero liberally 'borrowed' from this earlier, low-budget horror film. Directed the obscure Herk Harvey, Carnival of Souls is a languid, mysterious story of a young woman trying to move on after some type of traumatic event. The world around her is just a bit off, but it gets worse the more she finds herself drawn to a mysterious carnival. Romero's zombies look very much like the ghouls here, complete with dark undereye circles and a general shambled walk. The twist has been done in countless films since, but the overall air of unease here is worthwhile.

Kristen Lopez writes about film nearly 365 days a year and is the Associate Editor at ClassicFlix. Her undying love for classic film and Veronica Lake can be found on and at Journeys in Classic Film.