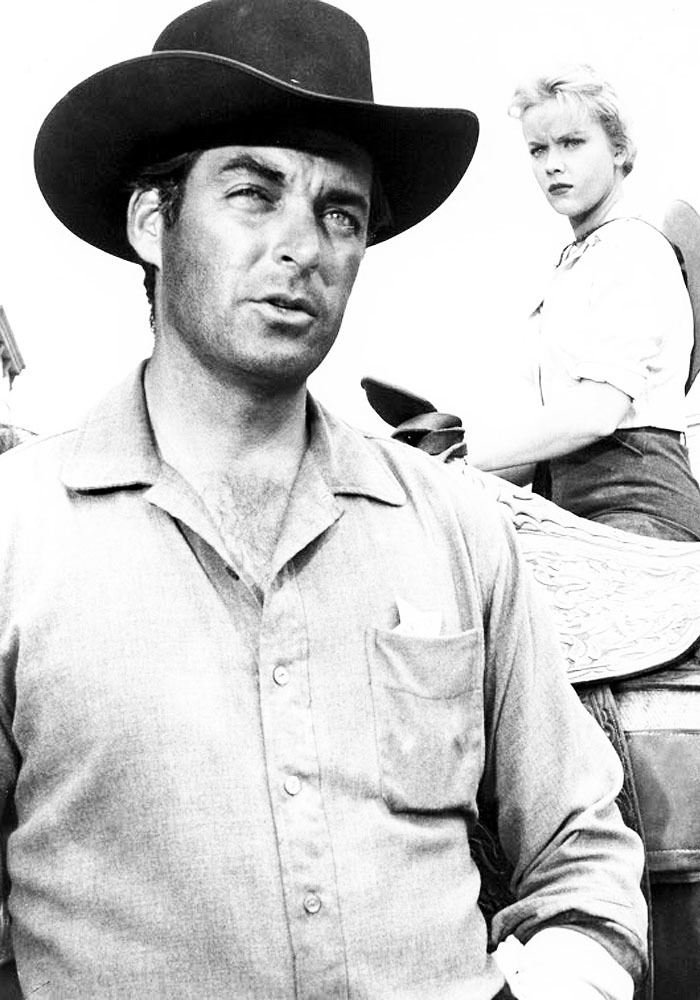 Last year I attended the 2014 Lone Pine Film Festival. It was my first visit, and I had such a terrific time that I immediately made plans to return this year. I'm glad I did, as I might have had an even better time this year!

The 2015 Lone Pine Film Festival was held in early October, giving film fans a wonderful experience enjoying many movies right where they were made.

As was the case last year, the Lone Pine Film Festival provides film fans with a multifaceted experience, including movies, lectures and panel discussions, book signings, and tours. The Lone Pine Fest has the unique ability to screen a movie and then invite guests to hop on a bus and visit the exact locations where that movie was filmed, in the Alabama Hills just a few minutes outside of town. While most of the tours focus on older films, newer movies are also celebrated; this year there was a 25th anniversary tour visiting the locations of Tremors (1990).

I enjoyed two 'watch and visit' experiences this year, starting with the Hopalong Cassidy film In Old Colorado (1941) on Friday morning and then the Rory Calhoun-Anne Francis Western The Hired Gun (1957) on Saturday morning.

I also took a tour focused on locations from Gunga Din (1939), which was an amazing experience. Artifacts from the filming 77 years ago are still present in the Alabama Hills, including bits of plaster scattered where the temple once stood and nails driven into rocks to secure the bridge.

All of the special guests were accessible throughout the weekend, and were more than happy to chat with fans. Relatives of filmmakers present are always happy to know their parent or grandparent's work is appreciated and remembered, and they attend as part of an effort to keep that legacy alive. Petrine Mitchum has become an expert on Hollywood movie horses, chronicled in her book Hollywood Hoofbeats, and she has many interesting facts to share in that regard.

The festival kicked off on Thursday evening, October 8th, with a gala buffet in the Lone Pine Museum of Western Film History, where I said hello to Wyatt and Petrine. Cheryl Rogers Barnett signed her new book, Cowboy Princess Rides Again, for me; it's wonderful, filled with family photos I'd never seen before despite having read several titles on Roy Rogers and Dale Evans. In keeping with the focus on early Lone Pine film history, a restored car which had once belonged to silent cowboy star Tom Mix was on display in the museum parking lot!

After dinner I enjoyed a wonderful concert by Western singer Don Edwards in the Lone Pine High School Auditorium right across the street from the museum where all of this year's screenings took place.

I was up early Friday for our first film and tour! Although I'm a big fan of Westerns, I'd never seen a Hopalong Cassidy film before this weekend, but I started making up for that by seeing two of his films.

Our guide to the movie's locations was Don Kelsen, a Los Angeles Times photographer and videographer who does amazing 'movie detective work,' traveling through the Alabama Hills with movie 'screencaps' in hand to put together the puzzle pieces of where a movie was shot. The challenges include that a character may be filmed against a background which is actually miles away from what the character is shown looking at! Don then shares the results of his work with festival guests, and walking through the Alabama Hills with him is both fascinating and fun.

Back in town I watched Randolph Scott in a good take on the Wyatt Earp story, Frontier Marshal (1939); that was particularly nice timing as I would go on to see a restored version of My Darling Clementine (1946) at UCLA just a few days later. Some of the incidents in the more famous Clementine appear to have been inspired by the earlier film, which was produced by the same studio.

I took in The Round-Up (1920) that evening, which is believed to be the first feature-length film made in Lone Pine. It stars Fatty Arbuckle as a kindly sheriff aiding several townspeople through various crises. The villain is convincingly played by Wallace Beery, and Buster Keaton turns up briefly as a Native American! The movie was accompanied by live piano music, making it a very memorable experience.

Saturday began with another early movie and tour, this time featuring The Hired Gun, which has beautiful black and white CinemaScope views of the Alabama Hills.

Saturday would be a five-film day, with the second film being James Warren starring in Code of the West (1947). Warren was one of a couple of actors who kept RKO's 'B' Western franchise going while Tim Holt served in the war; the other actor who made a couple RKO Westerns in the mid '40s was a young guy named Robert Mitchum!

Next up was George Montgomery in Riders of the Purple Sage (1941), one of four different iterations of the famous Zane Grey story shown. I would have been glad to see all four of them, if only my schedule had permitted! As it was, I enjoyed this evocative 55-minute version with the young Montgomery very much.

Heart of Arizona (1938), my second Hopalong Cassidy film of the weekend, was a real treat. It was great fun hearing Billy King reminisce, who received an audition to appear in some 'Hoppy' movies due to his success in horse shows. Billy and his horse Tony were signed to a couple of one-year contracts, after which Billy went back to 'regular life,' which eventually included teaching for decades at UC Davis. King revered Boyd, saying he was a class act; he said the director wanted him to look awed of Hoppy onscreen and that was no problem, as it wasn't acting! He particularly remembered meeting Boyd for the first time, when the famous cowboy shook his hand and said he was happy to be working with Billy and his horse.

Saturday night wrapped up with a newer film, Appaloosa (2008), with co-producer/co-screenwriter Robert Knott in attendance. I watch relatively few 'new' films but I liked Appaloosa a great deal and would recommend it to fans of classic-era Westerns.

The final tally for my Lone Pine Film Festival experience this year was eight movies, three tours, and a concert! Despite accomplishing so much in a short time frame, the weekend felt very relaxed and included time socializing with fellow film fans. There was so much available to do at the festival, I could have followed a completely different itinerary of movies and tours and still been extremely happy!

The 2016 Lone Pine Film Festival will be held October 7th through 9th, with the theme 'A Tribute to the Western Directors,' described as 'an appreciation of the Western film and the directors whose vision created the tradition.' Early hotel reservations are strongly recommended, as Lone Pine is a small town and the hotels tend to sell out completely, although picking up a last-minute cancellation is possible.

I highly recommend this festival and hope to see some ClassicFlix readers there next year!