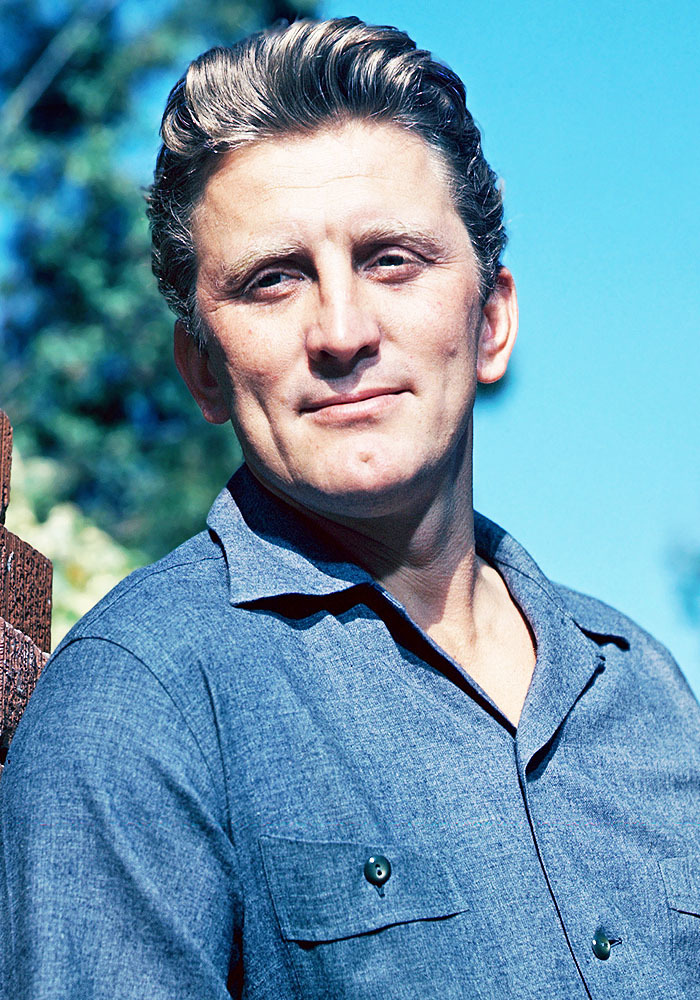 What movies come to mind when you think of Kirk Douglas?

Spartacus? Gunfight at the O.K. Corral? The Bad and the Beautiful?

For me, without question, it's Douglas's body of film noir work. From 1946 to 1951, Douglas appeared in six film noir features, serving up striking and memorable performances in each. Whether he was playing a ruthless mobster, an inflexible lawman, or a spineless spouse, Douglas used his considerable talents to make an unforgettable impression.

If you haven't seen every one of Douglas's film noir offerings, you've got some great movie watching ahead! Here's what's on the menu:

Douglas's first noir -- and, incidentally, also his big screen debut -- was brought about in part by actress Lauren Bacall, with whom Douglas attended the American Academy of Dramatic Arts. It was Bacall who recommended Douglas to producer Hal Wallis for Wallis's upcoming film. Wallis heeded Bacall's suggestion to catch Douglas in a play in which he was appearing in New York, and promptly brought Douglas to L.A. for a screen test and, ultimately, his first role.

Martha Ivers stars Barbara Stanwyck in the title role of a wealthy small-town business woman who operates her enterprises in the same steely manner that she runs her personal life -- and that includes her relationship with her weak-willed husband, Walter (Douglas), who's known Martha since they were children. Thanks to his wife's unyielding ambition, Walter runs for re-election to the office of district attorney (and, according to one character, will eventually run for governor: 'Gonna be whatever his wife wants him to be,' the local resident opines).

Along with Martha and another boyhood chum, Sam Masterson (Van Heflin), Walter forms the third part of a dysfunctional triangle typified by deception, infidelity, jealousy, and murder.

Favorite Walter quote: 'You're insane. You're out of your mind. Me, too.'

Other stuff: For his performance, Douglas was singled out in numerous publications, including the New York World-Telegram, whose critic reported that the actor 'gives the weakling Walter a convincingly sustained color.'

Douglas next appeared in one of noir's quintessential offerings, playing a character that would have cheerfully made mincemeat out of the character from his first noir. In this feature, the actor plays Whit Sterling, a ruthless mobster with a misleadingly unflappable, almost pleasant, demeanor. Told mostly in flashback, Out of the Past centers primarily on Whit, his girlfriend, Kathie (Jane Greer), and private detective Jeff Bailey (Robert Mitchum), who goes in search of Kathie on Whit's behalf and winds up falling for her himself.

Suave and urbane, Whit isn't your conventional mob boss. We don't know anything about his background, but the furnishings in his lavish estate indicate his refined tastes, and his elaborate scheme to exact revenge on Jeff Bailey shows his obvious intelligence. Douglas's Whit isn't in every scene, but when he is on screen, you can't help but notice him -- Douglas portrays him with a smoldering, low-key sense of danger more frightening than any amount of in-your-face blustering could have been.

Favorite Whit quote: 'I fire people, but nobody quits me. You started this and you'll end it.'

Other stuff: The critic for The Hollywood Reporter lauded Douglas for 'manag[ing] to convey the fanaticism of the big league operator without overstretching things.' (I'm not altogether sure what that means, but I think it's a good thing!)

In his third film noir, Douglas stars as Noll 'Dink' Turner, a nightclub owner determined to hang on to his ill-gotten fortune after his former bootlegging partner, Frankie Madison (Burt Lancaster), is released from prison. Now that he's turned 'legit,' Dink refuses to honor the agreement he made before Frankie was sent up for his 14-year stretch in the Big House, and even loans out his girlfriend (Lizabeth Scott) in an attempt to keep Frankie at bay.

Of Douglas's six noirs, I Walk Alone is the weakest, but that doesn't mean it's not worth your time. Douglas turns Dink into the film's most interesting and watchable character -- both unscrupulous and clever, he's kinda like Whit Sterling's little brother. And, like Whit, while he has strong-arm underlings to do his dirty work, he's not above picking up a rod and jumping into the fray himself, if necessary.

Favorite Dink quote 'How can you collect on a race when you don't hold a ticket?'

Other stuff: I Walk Alone was the first of seven features in which Douglas would appear with his lifelong friend, Burt Lancaster.

Douglas was offered Champion, an independent feature produced by Stanley Kramer, at the same time he landed a role in The Great Sinner, a big-budget MGM costumer. 'I insisted on doing Champion,' Douglas recalled years later. 'It did well for me. Incidentally, The Great Sinner was a flop.'

In Champion, Douglas portrays Midge Kelly, a ruthless boxer who will stop at nothing to achieve the success he craves -- despite the cost to his disabled brother (Arthur Kennedy), his long-suffering wife (Ruth Roman), and his devoted manager (Paul Stewart).

Champion offered Douglas his meatiest role to date and transformed him into an 'overnight' star. His Midge hails from humble beginnings; he and his brother, Connie (Arthur Kennedy) have dreams of climbing out of their impoverished conditions by opening a restaurant. It's only by chance that Midge stumbles into the boxing game, and his true self emerges as he uses his friends and family as ladder rungs on his way to the top.

Favorite Midge quote: 'It's like any other business, only here the blood shows.'

Other stuff: For his performance as Midge, Douglas landed an Oscar nomination for Best Actor (he lost, however, to Broderick Crawford in All the King's Men).

In this film, initially released (and now titled) as Ace in the Hole, Douglas plays an unethical reporter named Charles Tatum, trying to make his way back into the big time after being fired from 11 newspapers. He gets his chance when he stumbles upon a small-town curio shop merchant trapped in an old Indian cavern. Working with a corrupt local official to prolong the merchant's plight, Tatum parlays the incident into his own personal news bonanza.

The film's title refers to the circus-like atmosphere that crops up around the cavern; as folks travel from far and wide to the site, the area becomes a tourist attraction complete with amusement rides, concession stands, campgrounds, and even a theme song. At the axis of this madness, Tatum stands as one of Kirk Douglas's most unsavory characters -- and that's saying something!

Favorite Tatum quote: 'I didn't go to any college, but I know what makes a good story. Bad news sells best. Good news is no news.'

Other stuff: In one scene in the film, Tatum bemoans the things he misses about New York, including pastrami, Madison Square Garden, and Yogi Berra. Kirk Douglas objected to the line, and reportedly wrote a memo to director Billy Wilder, asking, 'What the hell is a Yogi Berra?'

This gritty feature takes place over a 24-hour period in a New York City police station and contains a melange of memorable characters, from oddball criminals to salt-of-the-earth cops. Douglas is on hand as one of the latter, playing Jim McLeod, a detective whose uncompromising, highly ethical persona leaves little room for such trifles as forgiveness and compassion. The film is based on a popular 1949 play of the same name by Sidney Kingsley -- it ran on Broadway for 581 performances, and starred Ralph Bellamy in the part played in the film by Douglas. (The film's cast included several performers from the stage play, including Lee Grant and Joseph Wiseman.)

Jim's penchant for the straight and narrow is revealed early on when he stubbornly refuses to dismiss a minor embezzlement charge against a first-time offender: 'It's never a first offense,' Jim insists. 'It's just the first time they get caught.' Later, this quirk in his personality is illuminated even more when he is not unwilling, but simply unable, to summon understanding for his wife when he learns about a misdeed that took place several years before their marriage.

Favorite Jim quote: 'You butcher one more patient, and law or no law, I'll find you. I'll put a bullet in the back of your head and dump your body it the East River. And I'll go home and I'll sleep sweetly.'

Other stuff: Douglas earned much-deserved raves for his performance as the emotionally tortured cop. He was labeled 'superb' in the New York Times and 'never before so convincing' by the critic for The New Yorker.

And that's the Kirk Douglas film noir collection, in a nutshell. As this venerable actor approaches his 99th year of life next month, why not treat yourself by diving into his assortment of fabulous films noirs?

You only owe it to yourself.