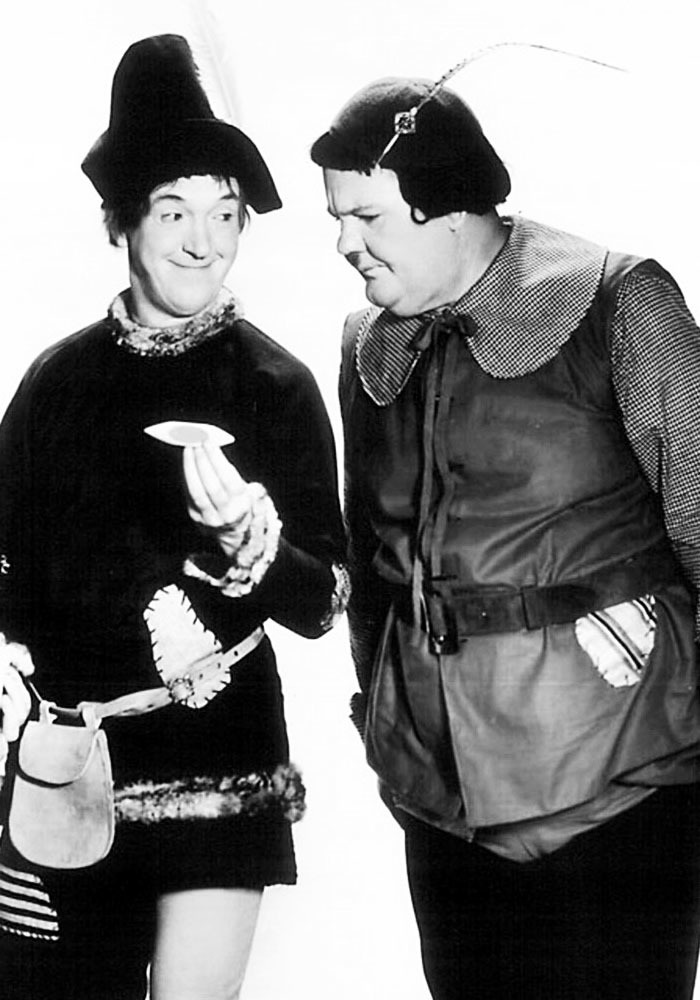 Another Nice 'mas: The Christmas Films of Laurel & Hardy

Oh, in the history of movies, there have been more successful comics, I suppose, than Stan Laurel & Oliver Hardy, more famous, more popular, and more influential. But has ANYBODY generated as many laughs? Is there any other comedy team that you can say is as beloved?

Not that we need a reason to revisit them (or, more accurately, have them revisit us), but the holiday season is as good a time as any to entertain kith and kin with the following films, most of which have snow, snow, and more snow, despite all being filmed in sunny Southern California, or are otherwise holiday-themed.

Big Business (1929) is their first out-and-out Christmas show, despite the lack of snow whatsoever. Mr. Laurel and Mr. Hardy are door-to-door Christmas tree salesmen who annoy James Finlayson, resulting in one of the most violent and hilarious tit-for-tat battles in motion picture history, as Stan and Ollie destroy his house and yard while Fin reciprocates by pulling their flivver to shreds, all while the neighbors and a cop look on in astonishment.

The Boys would go on to make dozens more films in their career, but very few funnier ones making this a silent slapstick masterpiece. (You may have heard they went to the wrong house to wreck it; not true, but a great legend. The house still exists today, the owners are aware of its significance in movie history, and it still looks pretty much the same.)

Onward to their talking pictures and Below Zero (1930) offers our heroes as a pair of street musicians playing 'In The Good Old Summertime' during the biggest blizzard you can imagine. When they find a wallet stuffed with money, they think their hard times are over -- but the worst is yet to come in this delightful 2-reeler.

The Spanish-language version of this film -- with Laurel & Hardy speaking their lines phonetically from an off-camera chalk board -- still exists, and is called Tiembla y Titubea ('Shivering and Shaking').

Laughing Gravy (1931) begins on a dark and snow-stormy night. Laurel & Hardy are attempting to stay inside where it's warm and cozy with their little dog Laughing Gravy -- in a boarding house with (a) ill-tempered landlord Charlie Hall, and (b) a strictly-enforced 'No Pets' policy. Needless to say, thanks to the affable Mr. Gravy, Mr. Laurel & Mr. Hardy are going to end up out in the snow in their nightshirts in this, one of their very best comedies. Both the Spanish version, Los Calaveras, and the French version, Les Carrotiers, exist.

Babes in Toyland (1934) was planned by producer Hal Roach as a feature Technicolor extravaganza to star Laurel & Hardy plus Charley Chase, Thelma Todd, Patsy Kelly, some of the Our Gang kids, and incorporate the classic Victor Herbert operetta. Most of that got tossed by the wayside (as did the original story Roach penned for the film) once the picture was actually made, but are any of their features more loved than this one?

Loosely (very) based on the Herbert operetta; Stannie Dum and Ollie Dee are toymakers in Toyland, and not very good ones, I'm afraid. They accidentally build 100 6 ft. high soldiers instead of 600 1 ft. high toys; they fail to help Mother Bo Peep keep her shoe from being repossessed; and their attempts to thwart the evil Barnaby, who has designs on the innocent Little Bo Peep, go spectacularly awry. Luckily, when Barnaby unleashes the hordes of Boogeymen from Boogeyland to attack Toyland, those 100 soldiers are around to protect Santa Claus, King Cole, Bo Peep and the rest of the land.

A perennial holiday favorite; if you live anywhere decent this is shown on one of your local TV channels every holiday season. Stan & Ollie at their peak (and oh my goodness, how producer Hal Roach and funnyman Stan Laurel fought bitterly over the shaping of this particular film!), a charming Charlotte Henry as Bo Peep (a year after portraying the lead in Paramount's all-star Alice in Wonderland), Henry Brandon, unforgettable as the villain, and - although used quite sparingly - lovely renditions of a handful of songs from the original Herbert musical. Highly imaginative staging, the Boogeymen are truly terrifying, and Laurel & Hardy are at their best - a perfect holiday movie).

Swiss Miss (1938) has little reputation, and it's not on a par with their best features (Pardon Us, Sons of the Desert, Way Out West and Block-Heads) but its heart is in the right place, and if you enjoy the Boys' operettas, such as Fra Diavolo, you'll like this one, too.

Stan & Ollie are mousetrap salesmen who immigrate to the Swiss Alps, figuring that where there's cheese, there must be mice. After being cheated out of their business, however, they're forced to work at a posh hotel, where they generally foul things up. That part of the picture is fine. The problem is plot #2, which concerns a temperamental songwriter staying at the hotel to write his 'masterpiece', an opera seemingly composed of pop songs.

The composer (a horribly miscast Walter Woolf King) is trying to stay away from his wife, a famous singer, who is also at the hotel, posing as a chambermaid to be near her husband. King, whom we all remember as the creep that slapped Harpo Marx around in A Night at the Opera, in this film alternates between being a rude pompous jerk and a much-beloved musical 'genius' serenading the townspeople from his balcony with such numbers as 'The Cricket Song' and 'I Can't Get Over the Alps.' The sets and costumes and overall high production value certainly help. Not a holiday movie, but there IS snow in the Alps, or so we've heard.

Getting back to the Boys, there's a funny scene with Stan trying to sneak some brandy away from a St. Bernard, and the film's most famous moment involves Stan & Ollie moving a piano across one of those classic swaying footbridges while trying to avoid a gorilla. Yes, a gorilla. I don't know what a gorilla was doing in the Alps, either, but it was still there when W.C. Fields visited a few years later in Never Give a Sucker an Even Break. Famed ape-man Charles Gemora is the gorilla, and he's much more likeable than either of the two romantic leads.

In his book 'Laurel and Hardy: The Magic Behind the Movies,' Randy Skretvedt explains that Roach and Laurel had a major falling out, in part because they disagreed on the script for this film, with Stan wanting to jettison the romantic parts that Roach insisted upon. (Roach was probably impressed by the box-office receipts of A Night at the Opera and wanted to make a similar film. He should've signed Allan Jones, then!) Within two years, the Laurel-Hardy/Hal Roach partnership would be over.