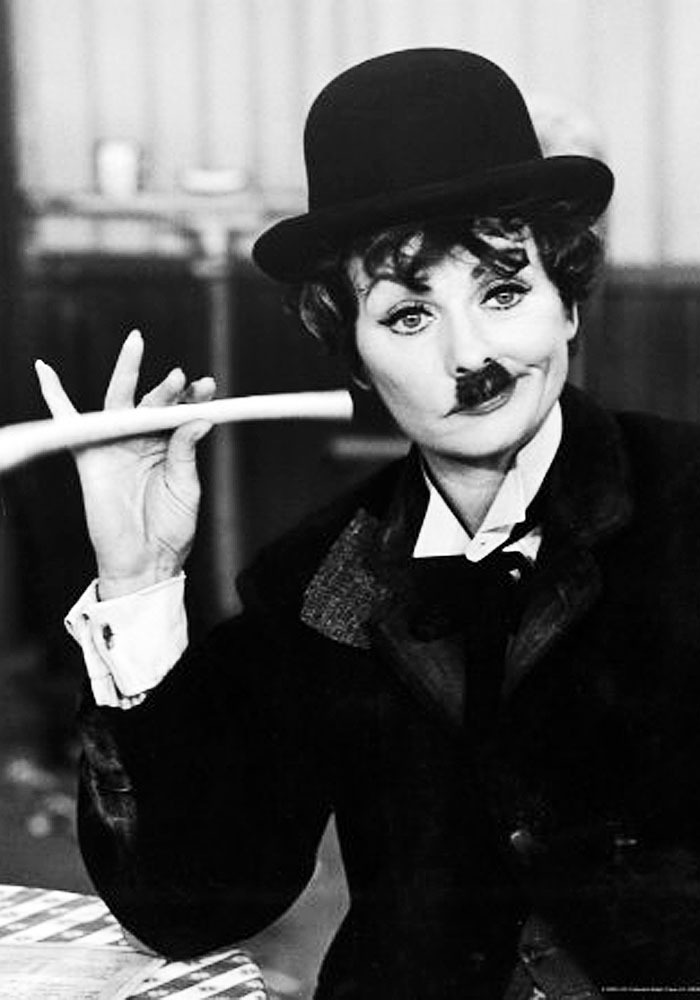 What better way to welcome the future than by revisiting the past? Inspired by some of your favorite classic television shows, we've assembled some tips on how to ring in the New Year the right way.

Get your New Year's resolutions squared away: Let's start, as more discussions of vintage TV should, with Davey & Goliath. In addition to producing the 15-minute stop-motion animation shorts we saw in reruns for years, the Lutheran Church of America created a series of holiday specials, including 'New Year Promise.'.

The kids are alone until they are to meet their parents at the church at midnight, and Davey's resolution-fulfillment strategy causes complications. Eventually he has to venture out into the snowy woods to find Sally where he finally realizes the value of a resolution is not in avoiding something bad, but in striving to do something good. I'm proud of Davey Hansen, but I'm a little troubled his parents ditched their kids without even giving them dinner so they could go party on New Year's Eve.

Dust off the old act: In The Lucy Show episode 'Chris' New Year's Eve,' Lucy's teenage daughter is throwing a coed shindig, and she wants the adults out of the house so they don't cramp her style. Lucy takes her two young sons to the Elm Tree Inn with Vivian for a night of dining, dancing, and listening to Vivian complain about not having real dates. I personally hope Lucille Ball and Vivian Vance resolve never to do the Watusi again, even for comic effect.

Suddenly they get word Chris' party is a dud. Half the boys don't know how to dance, and the other half are too bashful. So, for some reason, Chris wants her mother and friend to liven up the event by performing a sketch they did at the PTA last semester. Nothing gets teenagers fired up like an homage to Charlie Chaplin!

Lucy fans will enjoy her Chaplin imitation, but this episode feels like a big cop-out. It's like they wanted to do a holiday episode, ran out of ideas, and someone said, 'Well, we can just have them do a sketch until we get to the end.' I mean, this goes on for eight minutes -- I think longer than some of Chaplin's actual films. Strangely, the kids love the act, and Chris thanks her mom for saving the night and making it the best party ever. (I can only imagine how well it went over with the PTA.) I know I'm already making plans to thrill my daughter and her friends at their own New Year's Eve party in 2025 with my patented Edgar Kennedy routine.

Be open to new things: If I told you a deranged man held Marshal Dillon and Chester at gunpoint, repeatedly promised to kill an ex-partner named Jed Larner, attacked Chester with a weapon, and robbed a bank, you might think this was a particularly intense episode. But if I told you Ira Pucket was an old man with a bushy beard, you'd shrug off the threats, the assaults, and the felony robbery, right?

Well, that's what Dillon does in 'Pucket's New Year,' grinning his way through the whole episode as he tries to reform the grizzled Ira Pucket, a buffalo hunter with a bum leg left to die by Larner. The lawman doesn't exactly need to draw on his years of experience in law enforcement to discover Pucket's goals. Each time he sees him, Ira tells Matt all he wants to do is kill Jed Larner with his bare hands. I guess you have to admire how up front he is about it.

There isn't a whole lot of New Year's celebration in this half-hour. We don't see a giant disco ball suspended over Main Street in Dodge City, and even Kitty's saloon is pretty sedate. But we do get several references to the possibility for renewal a new year brings, the chance to start over and make a new life. As Chester so eloquently puts it, 'A whole new year's done started.' At my next holiday gathering, I'm going to wait till just after midnight, let the entire hullabaloo settle down, look around the room and declare, 'Hey, everyone, a whole new year's done started!' It's a lot more profound and catchy than that tired, old 'Happy New Year!'

Give Marshal Dillon credit for actually giving someone the chance to start anew. Knowing the prideful Ira, no longer able to make a living roaming the wilderness, feels useless, Matt gets him a job riding shotgun as a stagecoach guard. With a little planning, the calling in of a favor or two, and a condescending chuckle, the marshal turns Ira Pucket from a gun-wielding, vengeful obsessive into -- well, come to think of it, Ira still carries a loaded shotgun, and now he has a job giving him the opportunity to ride all over the territory. If I were Jed Larner, I wouldn't get too comfortable.

Then again, don't abandon the old things: You could always count on The Jack Benny Program to deliver a solid holiday outing. In fact, you could often count on it to do the same one over again in a few years.

'New Year's Eve' (1961) and 'Reminiscing About New Year's Eve' (1953) tell essentially the same story, complete with many of the same gags. There are more than enough differences, though -- like Bob Crosby crooning in the earlier version instead of Dennis Day -- to make them worthwhile watching back to back. It's a valuable reminder not to throw everything away with the changing of the calendar. After all, it might come in handy again in, oh, about eight years or so.

The later version is slicker and better, but two things stand out in both: The resolution of the story is a heartwarming affirmation of the affection between Jack and Rochester. Also, it's a great example of the discipline the series exhibits. The script takes its time in building to a great joke (I don't dare spoil it here) that comes as a surprise but is effective precisely because of the gradual build. To be fair, there were fewer opportunities to change the channel then, and viewers wouldn't have to wait through two commercial breaks to get to the punch line.

Keep your privacy: Sure, Rockin' New Year's Eve has long been a tradition on the tube, but television was celebrating the holiday as far back as 1951, back when Dick Clark actually was still a teenager. Suspense dramatized an interesting night of partying in a city apartment in 'Telephone Call'.

Mr. Everett Kelsey is invited to the wild party his neighbors are throwing across the hall, but he begs off because he has other plans: He wants to poison his wife. Well, that's not what he tells them, but that's his big plan, and the idea of listening to Guy Lombardo records isn't enough to make him change his mind.

The Haskells want to drag Everett over to their place so the unassuming man can get away from his shrewish wife and have some fun for a change. Mrs. Haskell reports that Mrs. Kelsey only pretends to be an invalid so she can be spoiled and get attention. It's tough to feel sorry for Mrs. Kelsey, who we see mocking and berating her hubby, then gloating that he'll never do anything about it because he's not enough of a man.

Well, Everett shows her by spiking her drink, but he gets a telephone call from an unknown female saying she was watching him through the window and saw what he did. Kelsey gets increasingly flustered and paranoid, obsessed with finding out who saw him and what she saw. Let's just say it all ends quite badly, and I don't mean the Guy Lombardo record gets scratched. We do get a valuable lesson from this early example of live television: If you're going to try to murder your wife on New Year's Eve, at least have the decency to close your blinds.

Then again, who needs privacy? Let everyone in! In That Girl's 'Should All Our Old Acquaintances Be Forgot', Donald waits too long to make New Year's Eve reservations for the gang, and Ann suggests they just have a romantic evening as a couple. I wouldn't be surprised if Donald 'accidentally on purpose' put off those reservations so he could save seventy bucks. The two of them embrace the idea, and Ann's friend and neighbor Ruthie loves it so much, she decides her and Jerry will do the same thing.

As the evening begins, Ann's parents invite themselves over for a drink, and soon half the neighborhood ends up in the apartment. Ann and Donald start running out of patience, disappointed by the collapse of their plan for a quiet evening alone. Even worse, they start running out of party supplies, so what does Ann do? While frequently complaining about the intrusions from which she is suffering, she keeps heading over to Ruthie's place to interrupt HER romantic evening and borrow things like drinking glasses.

I think Ann Marie should resolve to gain a little awareness of people other than herself in the year ahead. Moreover, I think her father Lew should pledge to tone down his wild party animal ways. At one point, he actually puts a lampshade on his head. Did anyone ever do this outside of television and Mad Magazine?

If all else fails, do it again in six months: We discussed 'Bilko's Tax Trouble' when we gave some TV-inspired tax tips, but the classic Phil Silvers Show episode offers a great lesson for New Year's: It's never too late to celebrate. Facing an audit and desperate to justify his tax return, Ernie Bilko recreates the New Year's Eve party he sold tickets for but didn't actually throw.

Bilko tells the gang to get the hats and horns, and he wakes up the barracks so they can get the New Year's party they paid for. The platoon yells 'Happy New Year,' (I guess they thought 'A whole new year done started' was a tad wordy) sing 'Should Auld Acquaintance Be Forgot,' and it all sounds genuine enough to convince Colonel Hall, who hears the festivities and embraces his wife to rejoice in the occasion. As we've seen, there are many ways to celebrate New Year's Eve, but leave it to Ernie Bilko to show us that even if we don't do it right on December 31, we can always try it again later in the year!