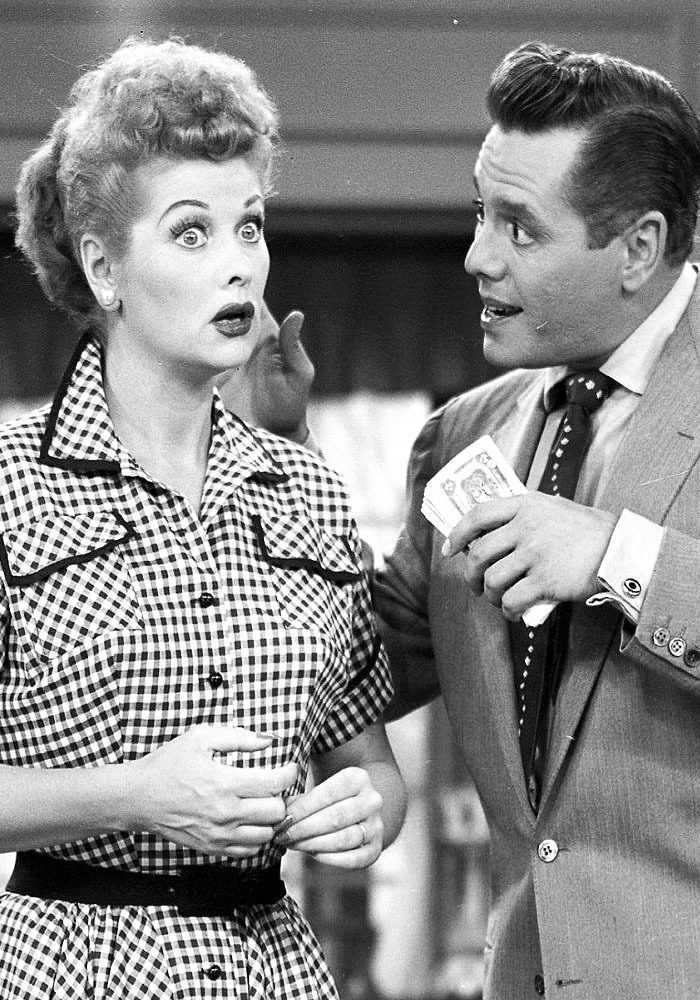 Wesley Hyatt's Television's Top 100: The Most Watched American Broadcasts 1960-2010 is an excellent book exploring television history through an unofficial ranking of sorts. It's no mere list, though, but an entertaining and informative read with write-ups on each of the 100 broadcasts. In this column and the next, we'll examine episodes included in the book belonging to the ClassicFlix era that are available on DVD.

A few caveats: To avoid making a book consisting of a bunch of Super Bowl and Beverly Hillbillies entries, Hyatt gives each series or special just one slot on his list, meaning his top 100 is more of a representative sample than a pure ranking. Also, he limits shows from the 1950s to a special abbreviated section because the ratings system was so different then. He highlights three programs, though, as standouts of that decade:

I Love Lucy, 'Lucy Goes to Hospital': On January 19, 1953, millions and millions of viewers watched CBS to see Lucy Ricardo go to the hospital to deliver baby Ricky (What, you thought she had a hangnail?). I have a feeling we'll look at this again in a future column, but it's not surprising that a landmark installment of one of the medium's most iconic programs endures as one of the most watched programs ever, with a reported 44 million viewers.

Now, a 'paltry' 44 million pales compared to modern Super Bowls, which go over 100 million viewers, but keep in mind the big games are seen in about half of all American households, while 'Lucy Goes to Hospital' was in nearly 72%. (And I assure you that is the end of the math portion of this column.)

Ed Sullivan Show, 'Elvis, Charles Laughton': Elvis Presley made a ballyhooed appearance on the popular variety show September 9, 1956, performing several songs from a remote studio. It's remarkable that on such a historic broadcast, the host missed his own show; Sullivan was recuperating from a car accident, and guest host Laughton brought his own offbeat charm to the proceedings. You can't overstate the impact Elvis had in 1956, but watching the DVD now, Laughton may be the more fascinating part of the show. No, he doesn't swivel his hips, but he does read poetry!

Rodgers and Hammerstein's Cinderella: Many TV buffs might identify the Lucy episode and the Sullivan debut of Elvis as high-rated programs, but this may be one of the more underrated events of television history. The March 31, 1957 broadcast with Julie Andrews in the title role was a huge success for NBC despite an appalling lack of talking mice. Despite being overshadowed by the Disney feature, this version of the fairy tale endures, and it's nice that it lives on via DVD.

Now let's begin with the real heart of Hyatt's list, going in chronological order beginning in the 1960s. Keep in mind many of the broadcasts are not mega-hyped 'events' like we expect today, just regular episodes of the series in question.

Wagon Train, 'The Colton Craven Story': Except this one! Legendary Hollywood director John Ford didn't do a lot of television, but he went to the small screen at the urging of his old friend and colleague Ward Bond. After all, Wagon Train was inspired in part by Ford's movies, especially Wagon Master, which starred...Ward Bond! Hyatt reports that Ford was not a television fan but often sent Bond critical notes on the show. So finally Bond suggested he try to do better.

To accommodate the noted filmmaker, producers gave him an extra day to shoot, and Ford delivered an extra-long episode trimmed for air after initially thinking it would be a two-parter. I don't know that you could watch this episode cold and know, 'Hey, that's John Ford's work,' but you do see some sweeping vistas, some other Ford repertory players (the great John Carradine has a fun villainous part) in the guest cast, and an overall broad scope, thanks, in part, to Civil War flashbacks.

Also, not every episode of Wagon Train offers actual 'wagon training,' for lack of a better term, but 'Colton Craven' has some exciting action sequences. Be patient, and you'll see a cameo by one of the true American movie icons, appearing in silhouette as General Sherman. This superstar was billed as 'Michael Morris,' so I don't think the episode's big numbers were because of his appearance. It didn't exactly face stiff competition for NBC at 7:30, besting Hong Kong and The Aquanauts.

Gunsmoke, 'Love Thy Neighbor': Sticking with the Western genre, this half-hour from the series' sixth season showcases a strong guest cast, including Jeanette Nolan, Harry Dean Stanton, Warren Oates, and Jack Elam. Also distinguishing this tale of family feuding that spins out of control is it marks co-star Dennis Weaver's debut as occasional director.

Weaver and the screenwriters give his Chester character a heartfelt line summarizing the tragedy unfolding in Neighbor while serving as a powerful keynote at the episode's close. Yet the focus is more on the guest stars and the clans that embroil themselves in escalating violence over stolen potatoes.

These half-hour Westerns often play fast, and this is no exception; the story easily merits a full hour. There's nothing wrong with this tight narrative, though, and it packs a wallop even with the accelerated pace of the events.

Hyatt suggests Gunsmoke, then the top-rated program, was so powerful for CBS that rival networks essentially gave up countering it. On this late January Saturday at 10:00 P.M., Gunsmoke faced the Fight of the Week and The Nation's Future.

The following season was a different story. CBS wanted an hour-long Gunsmoke, and ratings slipped. The format change hurt the series so much it only lasted another 14 seasons.

The Lucy Show, 'Lucy Waits Up for Chris': In this program, Lucille Ball does all the things her fans expect her to do: She gets into embarrassing situations, jumps to conclusions, jumps on a trampoline...OK, the trampoline thing is a little out of the ordinary.

Otherwise, this debut episode of Ball's new series must have offered a nice dose of the familiar for devoted followers of the comedienne. It was a welcome event for both CBS, and for Lucy and Desi Arnaz's production company Desilu, which was experiencing financial troubles. Reportedly CBS agreed to air Desilu sitcom Fair Exchange only if Ball herself agreed to star in a new comedy. Lucy's show lasted six seasons despite skepticism from the suits at CBS that she could carry a show without William Frawley (OK, it was actually Desi's absence that concerned them, but I wish it were the way I wrote it), and, well, let's just say you won't be seeing Fair Exchange on DVD anytime soon.

'Lucy Waits Up for Chris' was an eagerly anticipated premiere, and its competition that night--'The Rifleman' and 'Saints and Sinners'--did not survive beyond this season. Desilu got I Love Lucy's Monday night slot, the old writing staff, and even Vivian Vance, and the results didn't stray too far from what had worked before, at least not in this initial outing. Widower Lucy Carmichael frets over her daughter Chris' dating life, and hijinks, including the aforementioned trampoline scene, ensue. You don't see Arnaz, you don't see a big guest star like Richard Burton, you don't even see series regular Dick Martin yet, but you get a pleasant if predictable start to a show that lasted most of the decade.

The Dick Van Dyke Show, 'The Third One from the Left': I love, love, love The Dick Van Dyke Show, but I can't say there is anything particularly memorable about this installment. Guest star Cheryl Holdridge is Joan, a performer Rob Petrie picks from the chorus line to get a featured part on The Alan Brady Show. The grateful Joan develops a crush on Rob, making him uncomfortable, and he asks Laura for help in dealing with it.

It's a solid outing all around, with Laura's matter-of-fact advice providing a hilarious contrast to Rob's flustered account of the situation. I also love the moment when Joan's boyfriend shows up at the office. Still, it's a surprise to see this episode on the list.

So why, then, DOES it make the Top 100? Well, Espionage wasn't a world beater over on NBC, and Ben Casey wasn't a threat at the time, but Hyatt posits a simple explanation not directly related to the opposition: It followed The Beverly Hillbillies on CBS.

The Beverly Hillbillies, 'The Giant Jackrabbit': Speaking of the Clampetts, just a week after that episode of the Dick Van Dyke Show, The Beverly Hillbillies did a huge number for CBS on Wednesday. I remember reading one of the old 'Book of Lists' editions and being amazed that one of the highest-rated broadcasts of all time -- in fact, the single highest regular sitcom half-hour--was a confrontation between Granny and a runaway kangaroo she thought was a colossal jackrabbit.

It took Hyatt to add context and explain what made this night such a special one for the long-running rural sitcom. As he writes, January 8th was new President Lyndon B. Johnson's first State of the Union speech, and that made a much better lead-in than others CBS gave the show that season -- the short-lived likes of Glynis and Tell It to the Camera. Plus, in 1963 and 1964, the Paul Henning show was a massive ratings getter. January 8th showed what the juggernaut could do with a substantial program before it.

Granny squaring off against a kangaroo she hopes to turn into rabbit stew is amusing, but the real highlight of the episode is Buddy Ebsen as Jed. The Clampetts need some vittles because hunting in Beverly Hills isn't fruitful, and Jethro remembers Mr. Drysdale telling him they could call Beverly Hills Caterer for food delivery. Jed assumes 'Beverly' is a neighborly widow, and his attempts to explain himself to the woman who answers the phone for the catering company are great. Ebsen's puzzled expressions at the treatment he gets for being considered a crank are the best. That said, I'm sure when it crafted the preview ads, CBS went with Granny boxing a kangaroo.

In the next TV Time, we'll look at the rest of the highest-rated shows of the sixties, with one certain beloved fictional community playing a big role.