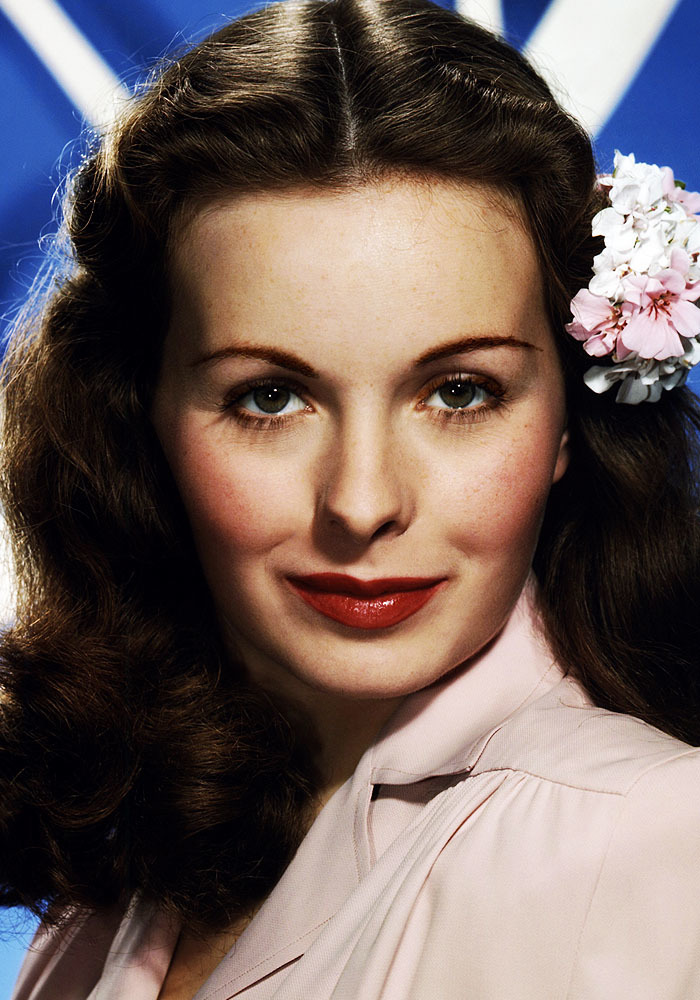 The ladies of film noir, typically, are no ladies. More often than not, they're duplicitous dames, mercenary molls, and corrupt cuties, not a lady in the bunch.

Still, for every rule, there's an exception, and there are numerous noirs featuring femmes who most decidedly do not fall into the 'bad girl' category -- I like to think of them as good girls in bad company. My favorite gals of this group just happen to also appear in three of my favorite noirs: Leave Her to Heaven, They Live By Night, and The Asphalt Jungle.

In this rare Technicolor noir, Jeanne Crain plays Ruth Berent, the adopted sister of Ellen (Gene Tierney), whose striking beauty cannot mask her possessive nature and her insane jealousy of those she loves. After an impromptu marriage to writer Richard Harland (Cornel Wilde), Ellen is first vexed by the presence of her husband's disabled brother, and later finds her own unborn child to be an unwelcome intrusion on her marriage. Ellen, soon, becomes resentful of the growing friendship between Richard and her sister, enraged when Richard dedicates his latest book to 'the gal with the hoe,' his pet name for Ruth.

But after accusing her sister of pursuing Richard, Ellen is confronted by Ruth's true feelings for her: 'All my life I've tried to love you, done everything to please you, All of us have -- Mother, Father, and now Richard. And what have you done? With your love you wrecked Mother's life, you pressed Father to death, and you've made a shadow of Richard. I don't envy you -- I'm sorry for you. You're the most pitiful creature I've ever known.'

It is this speech that caught my attention, making me look at Ruth Berent with fresh eyes -- although the strangely compelling Ellen is certainly the showier of the siblings. Where Ellen is pushy and assertive, Ruth is reticent. While Ellen looks made up, decked out, and coiffed to the nines, even when she's clad in jeans or a bathing suit, Ruth manages to appear casually comfortable no matter what she's wearing. And although you could never imagine Ellen pitching in to help solve a jigsaw puzzle or digging in the dirt or folding laundry, for Ruth, such acts are so natural you scarcely notice she's doing them.

It's a credit to Ruth's character that she grew up with the soul-sucking Ellen while still remaining her sweet, unspoiled, uncomplicated self. Instead of trying to compete with her sister's all-encompassing persona or, even more understandable, developing a hard, defensive shell, Ruth manages to develop into a mentally and emotionally healthy young woman. This makes the aforementioned speech all the more satisfying -- after years of living in Ellen's venomous shadow, grinning and bearing it and biting her tongue, Ruth finally lets her sister have it -- right between the eyes.

They Live By Night tells the story of three escaped convicts -- two hardened criminals, T-Dub (Jay C. Flippen) and Chickamaw (Howard DaSilva), and one impressionable youngster, Arthur 'Bowie' Bowers (Farley Granger). After they bust out of prison, the three hide out for a time at the home of Chickamaw's brother, Mobley (Will Wright), whose daughter, Keechie (Cathy O'Donnell), is just about Bowie's age.

On first glance, Keechie is as dirty as the people who surround her -- she works in her father's garage and dresses like a mechanic. And she's no lovely flower in a sea of garbage -- her demeanor is quiet and somber, even sullen at times, and she has a straightforward personality that allows her to tell it like it is -- no beating around the bush. Shortly after meeting Bowie, she's already sized him up. 'Fine company you're running with. Where'd you think you'd get with them?' she scolds. 'You think you're quite a man, don't you? You don't know what you want.' But there's something about Keechie that draws Bowie to her -- before he knows it, he's sharing with her his hopes and dreams, and his plans to get 'squared around.'

Keechie possesses a fascinating mixture of divergent qualities, made all the more interesting because of her upbringing -- her father is an unreliable drunk, her mother ran away with another man, her uncle is a conscienceless killer. It's no surprise, then, that she is hard-hearted and resolute, cynical, and no-nonsense, with a bleak but practical view of the future.

As it turns out, though, Keechie's rigid exterior serves as an effective cover for the thoughtful, kind-hearted, sentimental woman beneath. When Bowie is injured in a car accident and taken to Mobley's to recover, Keechie falls for him, and the two hit the road together, getting married by a small-town Justice of the Peace. Despite Bowie's lawless past, Keechie's steadfast love, faith, and belief sustain her husband and fill him with the conviction that, together, they can make a future.

Directed by John Huston, The Asphalt Jungle centers on a mixed bag of characters that unite to pull off a jewel heist. The group includes mastermind 'Doc' Reidenschneider (Sam Jaffe), an aging gentleman of a criminal recently released from prison; Louis Ciavelli (Anthony Caruso), an expert safecracker with a wife and baby at home; Alonzo Emmerich (Louis Calhern), a crooked -- and, as it turns out, broke -- attorney who is supposed to fence the stolen jewels; and the muscle of the crew, Dix Handley (Sterling Hayden), whose only dream is to return to his family home in Kentucky.

On the fringes of this group is Doll Conovan (Jean Hagen), the sole character in the film with a pure heart and no agenda. She's painfully in love with Dix, who treats her with respect, but unquestionably does not return her feelings. We first meet Doll when she arrives at Dix's apartment, suitcase in hand. After dissolving into tears, Doll admits she's been locked out of her room and asks Dix if she can bunk at his place for a night or two. Free from artifice or shame, she doesn't miss a beat when her tears dislodge one of her false eyelashes, and her gratitude trumps any personal offense she might have taken when Dix allows her to stay, but warns her 'not to get any ideas.'

We aren't privy to the back story of Dix and Doll, but we can surmise any romantic relationship they may have once had is now decidedly over -- but that doesn't stop Doll from hanging onto Dix's every word, like she does when he waxes rhapsodic about his childhood on the Kentucky horse farm. And when Dix cuts her off as she starts to share her own story, only a brief flicker in her eyes reveals Doll's hurt feelings -- which she quickly masks by jumping to her feet to tidy Dix's room.

Doll's unconditional love for Dix is demonstrated even more starkly near the film's end, when Dix -- injured during a gun battle related to the stolen jewels -- decides to take her on the lam. Rather than berate or judge him for his criminal proclivities, Doll braves the police-packed neighborhood to find a getaway car for Dix and then insists on going along. 'I just want to be with you,' she tells him when he objects and then, for the first time, exhibits a steely resolve showing a glimpse into her true persona. 'You can't go without me -- I won't let you. I won't tell you where the car is.'

While the femmes fatales of noir are certainly fun to watch, there's no denying that many films noirs feature 'good girls' with just as much brains, strength, and gumption as their darker counterparts. Give these ladies a look, and you'll see what I mean!