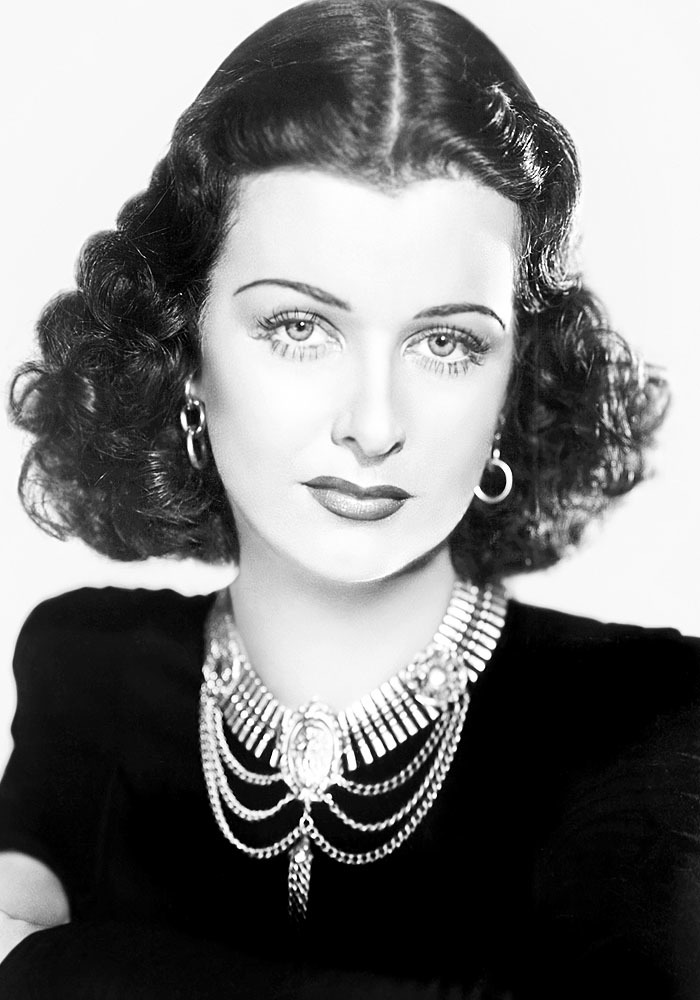 Joan Bennett's film career, which spanned decades, is interesting in that it was divided into several distinct chapters, marked by changes in her appearance and the types of roles she played. What never changed, however, was the keen intelligence she brought to each part, along with her striking beauty.

Joan was born February 27, 1910, into an acting family which included her father, theatrical star Richard Bennett, and her older sister, Constance; Constance Bennett was, of course, a great film star in her own right.

In the '30s Joan was a blonde ingenue starring in pre-Code dramas such as Me and My Gal (1932) with Spencer Tracy. As the '30s continued she was the heroine in musicals, comedies, and Westerns opposite the likes of Bing Crosby, Cary Grant, and Randolph Scott.

Midway through the film Trade Winds (1938) Joan's character disguises herself by changing from blonde to brunette, and the change was so successful that Joan kept her hair dark for the remainder of her career.

As a brunette Joan starred in adventure films such as Green Hell (1940), a wonderful 'jungle' movie with Douglas Fairbanks Jr. and George Sanders, and in the Alexandre Dumas tales The Man in the Iron Mask (1939) and The Son of Monte Cristo (1940).

More significantly, in 1941, Joan began a five-film collaboration with director Fritz Lang, which included classics such as Man Hunt (1941), The Woman in the Window (1944), and Scarlet Street (1945).

Joan was a memorable femme fatale in the latter two films; she was notably unafraid to play parts which weren't traditional leading lady roles, whether it was the sleazy user Kitty of Scarlet Street or the mean, unhappily married woman who might have murdered her husband in The Macomber Affair (1947), opposite Gregory Peck.

Unlike some actresses, Joan was also willing to play the mother of a young woman when she was still in her 30s, starring with James Mason in the superb crime film The Reckless Moment (1949). Joan's performance as a mother attempting to cover up the fact that her daughter (Geraldine Brooks) accidentally killed a man was probably her very best. Joan was also the mother of Elizabeth Taylor in Father of the Bride (1950) and Father's Little Dividend (1951), which reunited Joan with her Me and My Gal costar of nearly two decades before, Spencer Tracy.

Off the screen, Joan was married several times, and was the mother of four girls. She was first married at age 16, with her eldest daughter Adrienne (later renamed Diana) born a few days before Joan turned 18. A second marriage in the '30s lasted a few years and produced another daughter, Melinda.

In 1940 Joan married producer Walter Wanger; they had two daughters, Stephanie and Shelley, with Joan's youngest child born when she was 38, less than a year before she also became a grandmother!

Unfortunately Joan had to weather a notorious scandal in 1951, when Wanger, believing Joan was having an affair with agent Jennings Lang, shot Lang. Wanger spent four months in jail, and the marriage managed to survive until 1965. Joan's final marriage dated from 1978 until her passing on December 7, 1990, at the age of 80.

Below is a selection of ten Joan Bennett films providing a good overview of her career.

Big Brown Eyes (1936) - Joan plays a manicurist-turned-reporter whose boyfriend, a police detective, is played by Cary Grant; they work together to crack a ring of jewel thieves and solve a baby's murder. It's a minor film, but directed with flair by Raoul Walsh, and is a good exemplar of Joan's '30s roles.

The Man I Married (1940) - This film is not very well known, but it should be. It's a powerful anti-Nazi film released by 20th Century-Fox less than 18 months before Pearl Harbor. Joan plays a New York art critic who takes a leave of absence to visit her husband's family in his native Germany, where the full import of what it means to live under Nazi rule gradually sinks in. Carol watches helplessly as her husband (Francis Lederer) becomes enthused about the Nazi party; she's had enough when she watches him swept up by a Nazi rally. She tells the American reporter (Lloyd Nolan) who comes to her aid 'I've seen men go mad over football games, but nothing like this!'

Confirm or Deny (1941) - This is a more minor WWII film than The Man I Married, but it's still very enjoyable and a personal favorite. Joan plays a government teletype operator who goes to work for an American reporter (Don Ameche) at Consolidated Press, where they struggle to continue publishing the paper during the London Blitz. This is one of a couple of 1941 releases in which Joan played a Brit; a fun bit of trivia is this film costars Queenie Leonard, who taught Joan her Cockney accent for Fritz Lang's Man Hunt the same year.

Girl Trouble (1942) - Joan reunited with Don Ameche in this giddy comedy where she plays a wealthy woman who temporarily finds herself short of funds when her assets are frozen in England due to the war. She rents her luxury apartment out to a Venezuelan businessman (Ameche) who mistakes her for the maid; she goes along with his misimpression so she can sleep for free in the maid's quarters, and chaos ensues! Some of it is pretty silly but there are also some 'laugh out loud funny' moments. To top off the fun, Joan is especially gorgeous in this one -- no wonder she remained a brunette!

The Woman in the Window (1944) - My favorite of her collaborations with Fritz Lang, Bennett plays the title character, whose portrait is admired by lonely professor Edward G. Robinson. After meeting he goes to have a drink with her, and then goes to her apartment; before he knows what's happened, he's killed her jealous lover in self-defense! Joan is marvelous as the femme fatale in this moody crime film, and for good measure the movie costars the great Dan Duryea as a blackmailer.

Scarlet Street (1945) - Scarlet Street reunited Joan, Edward G. Robinson, Dan Duryea, and director Fritz Lang for another film noir which is even darker than The Woman in the Window. A depressed working man (Robinson) who dreams of being an artist falls for Kitty (Bennett), who colludes with her no-good boyfriend (Duryea) to drain Robinson of his funds. Joan was again unafraid to plumb the depths of a crass character that might have been beautiful but, among other things, lived like an utter pig (check out her kitchen!). Like The Woman in the Window, it has an unforgettable -- but very different -- ending.

Secret Beyond the Door (1947) - This was Joan's last film with director Fritz Lang. I really enjoy this gothic melodrama, in which she plays a woman who impulsively marries a near-stranger (Michael Redgrave) while on vacation in Mexico. When she arrives at his home she learns he hasn't mentioned some significant things to her, such as the fact he has a son, and more importantly she's puzzled by her new husband's hot-and-cold behavior. Joan is quite likeable in this; after her hasty marriage, she deals with the surprises which come her way with grace, remaining committed to her marriage, though she suspects it might be the death of her.

Hollow Triumph (1948) - Joan plays the secretary and lover of a doctor (Paul Henreid), who falls in love with the doctor's doppelganger (also Henreid), a crook on the run from the mob. The crook's plans to bump off the doctor and replace him, the perfect way to hide in plain sight, are complicated by their love affair and the fact she knows there's a set of look-alikes...plus a little problem regarding the location of a scar. One wonders why a woman of her character's beauty and smarts is content to settle for a love affair, but once again Joan presents a wonderful combination of terrific intelligence and stunning good looks.

Father of the Bride (1950) - Joan just turned 40 when this film was released. It's a sparkling family comedy in which she and Spencer Tracy are the parents of beautiful young Elizabeth Taylor, seeing her through the whirlwind of an engagement and wedding to her fiance (Don Taylor). Vincente Minnelli directed this and the very good sequel, Father's Little Dividend (1951), in which Joan and Spencer become grandparents.