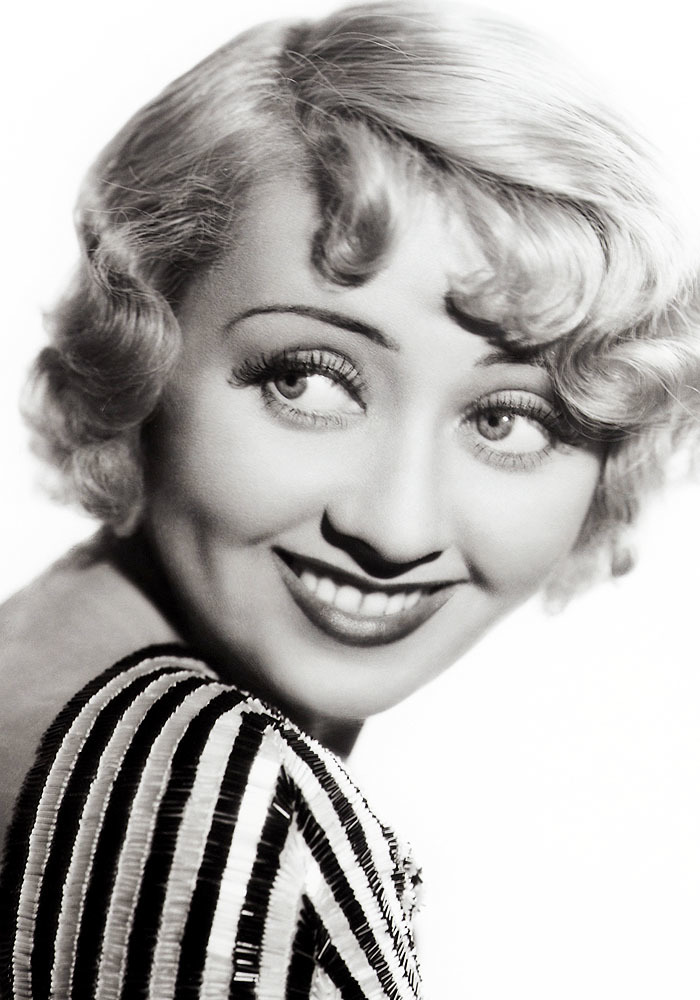 If you are of an age to remember an old Blue Bonnet margarine commercial from the 1960s, you'll know 'everything's better with Blue Bonnet on it.'

Well, I apply that same line of thinking to one of my favorite pre-Code actresses: 'Every film's better with Joan Blondell in it.'

Blondell appeared in more than 30 features from the pre-Code era including such classics as The Public Enemy (1932), but even in films that weren't classic, Blondell was a shining star. Whether she held the starring role or only a minor part, Blondell managed to make her presence known, appreciated, and remembered. She was a master at portraying strong, independent, no-nonsense women, with a sense of humor, a love of fun, and an undeniable sexual maturity. In short, she was simply a joy to see in action.

Today I'm taking a look at five of my favorite 'Blondell bits' -- those standout scenes which serve to show why Joan Blondell is a pre-Code gem.

Mary Astor stars in this William Wellman-directed feature as Lily, who appears to be blissfully married to Jack (Regis Toomey), until Jack invites his pal Bill (Grant Withers) to stay with the couple for a while -- and then, all bets are off. When Bill and Lily realize they have fallen in love, Bill moves out, but when Jack returns home to find Bill has flown the coop and his wife is nervous and crying, it doesn't take long for him to put two and two together. A knock-down, drag-out fight between Bill and Jack leaves Jack permanently disabled, Jack ships Lily home to her parents, and the film's climax focuses on some sacrificial heroics that ultimately provide a resolution for all concerned.

Blondell Bit: Blondell portrays Marie, a diner waitress who's been dating Bill for years, and desperately wants to marry him. Although she's obviously in love with Bill, she's no shrinking violet -- she doesn't take guff from anybody, including Bill. We see this no-nonsense attitude in an exchange she has with two patrons of the diner -- one of the men jokingly (and, I might add, disrespectfully) orders 'a big slice of you on toast,' and Marie responds she's 'APO -- ain't puttin' out,' also emphasizing she's Bill's girl, but when the customers recall seeing her out with another fella at a local joint, she breezily explains the man was a 'distant cousin.'

Later, when she meets up with Bill, she renews her campaign to get him down the aisle ('You want to, don't you? Well, let's go ahead and make it today,' she urges), but when Bill offers a lame excuse, she takes immediate offense, breaks up with him, and makes it crystal clear she won't be sitting at home, waiting for the phone to ring. 'Drop in at Fishback's Dance Hall tonight and get an eyeful,' she vows.

The titular role in this film is played by Barbara Stanwyck -- she's Lora Hart, an idealistic young nurse who gets more than she bargained for when she's assigned to work as the night nurse to two young children. Lora soon discovers that the girls' wealthy mother is a hopeless alcoholic under the emotional and physical control of the sinister family chauffeur (Clark Gable). What's more, she learns the children are being slowly starved to death. Blondell's character, Maloney (no first name is mentioned), is on hand as the girls' day nurse, and is the first to notice something is not quite right.

Blondell Bit: The gum-chewing, wise-cracking Maloney is at first resentful when Lora is accepted into the nursing program and assigned as her roommate, but her ill will doesn't last long.

Within seconds, she's taken the fledgling 'probie' under her wing, offering up some valuable advice about the men in the hospital: 'Take my tip and keep away from interns. They're like cancer -- the disease is known, but not the cure.There's only one guy in the world that can do a nurse any good, and that's a patient with dough. Just catch one of them with a high fever and a low pulse, and make him think you saved his life, and you'll be getting somewhere. And doctors are no good, either. What for? They never marry nurses. And the trouble with interns is they do. All a wife means to an intern is someone to sit in his front office when he starts practice and play nursemaid the rest of her life without pay. The thing to do is to land an appendicitis case. They've all got dough.'

Here, playing the title role, Blondell is a smart, crafty, and strong-willed dame who rises from poverty to the head of a crime syndicate. When we first meet Blondie, she's broke and unemployed, living in the back of a drugstore with her ailing mother, and existing off the charity of her neighbors. She's turned down when she seeks assistance from the government ('You have a roof over your head and you're not starving,' she's told), but after her mother dies, Blondie stops relying on the help of others and takes matters into her own hands.

Blondell Bit: Blondie moves to the big city following her mother's death, and wastes no time in hooking up with a young taxi driver (Sterling Holloway) to fleece a tidy income from unsuspecting locals. Unbeknownst to Blondie, one of her first targets is a high-level gangster, Danny Jones (Chester Morris), who's none too pleased when he learns he's been had. Danny confronts Blondie, but he quickly finds that her wide eyes and sweet smile mask a shrewd and fearless character.

And when Blondie is unfazed by Danny's tough talk, he resorts to violence, stepping squarely on her foot, only to withdraw it when she retaliates with equal vigor. 'I know all the answers and I know what it's all about,' Blondie tells him. 'I found out that the only thing worthwhile is dough. And I'm gonna get it, see? This city's gonna pay me a livin.' A good livin.' And it's going to get back from me just as little as I have to give.'

In this popular musical, Blondell plays Carol, one of three out-of-work showgirls who share an apartment -- her roommates are Polly (Ruby Keeler) and Trixie (Aline MacMahon). When the girls hear producer Barney Hopkins (Ned Sparks) is opening a new show, they leap at the chance to sign on, and Polly's boyfriend, Brad (Dick Powell), an aspiring songwriter, puts up the cash needed for financing.

It turns out Brad comes from a wealthy old Boston family, and his hoity-toity older brother, Lawrence (Warren William), is less than thrilled about his sibling's involvement with Polly, who he views as a gold-digger. When Carol and Trixie learn Lawrence intends to put a stop to Brad and Polly's plans to marry, they come up with a counterattack of their own. By the time Carol sings the film's final song, all is right with the world.

Blondell Bit: This is a small bit, but it's so moving. Carol is dispatched to meet with Barney to get the low-down about the rumored show and afterwards, she telephones her roomies with the exciting news that the production is a go! Throughout the call, Carol practically sobs with joy; it lasts less than a minute, but there's an entire story in the brief call: the girls' disappointment when their last show closed before it opened, their daily struggles trying to make ends meet, their raised hopes when they hear about the show, and the opportunities spread before them with the news the show is a reality. It's so real; you'll feel like crying yourself.

Blondell stars as Vicki, a high-spirited young wife who undoubtedly wears the metaphorical pants in her marriage, and whose greatest delights in life seem to come from frustrating her easily frustrated spouse, Tony (Warren William). When Vicki takes things a bit too far, Tony responds with domestic violence (yes, I said this was a comedy), and the couple heads for Splitsville. Vicki winds up married to her devoted-but-dull divorce attorney, Vernon (the always-great Edward Everett Horton), and Tony winds up alone and blue, but the two manage to find their way back to each other by the final reel.

Blondell Bit: It's Vicki's birthday, and although Tony plans to take her to dinner and a show, Vicki insists on having a few friends over for a game of bridge. With Tony as her partner, Vicki spends more time demonstrating her skills in goading her husband than she does in deciding which cards to play -- and when she sees he's close to the boiling point, she sweetly purrs, 'Now, don't be irritable, precious,' and blows him a kiss.

But the marital exchange reaches another level when Tony tells her she makes him 'impotent with rage,' and Vicki gleefully rejoins, 'You mean diced carrots?' The term, obviously intended to indicate another sort of impotence, sends Tony right over the edge -- he leaps to his feet, knocks the card table out of the way, and slaps Vicki, who flees from the room. Tony, appropriately mortified at losing his temper, follows her to issue his heartfelt apologies. But what he doesn't see, just before he reaches her, is Vicki's satisfied smiling face.

If it's been a while since you've checked out one of Joan Blondell's pre-Code performances, what are you waiting for? Treat yourself to some Blondell today!