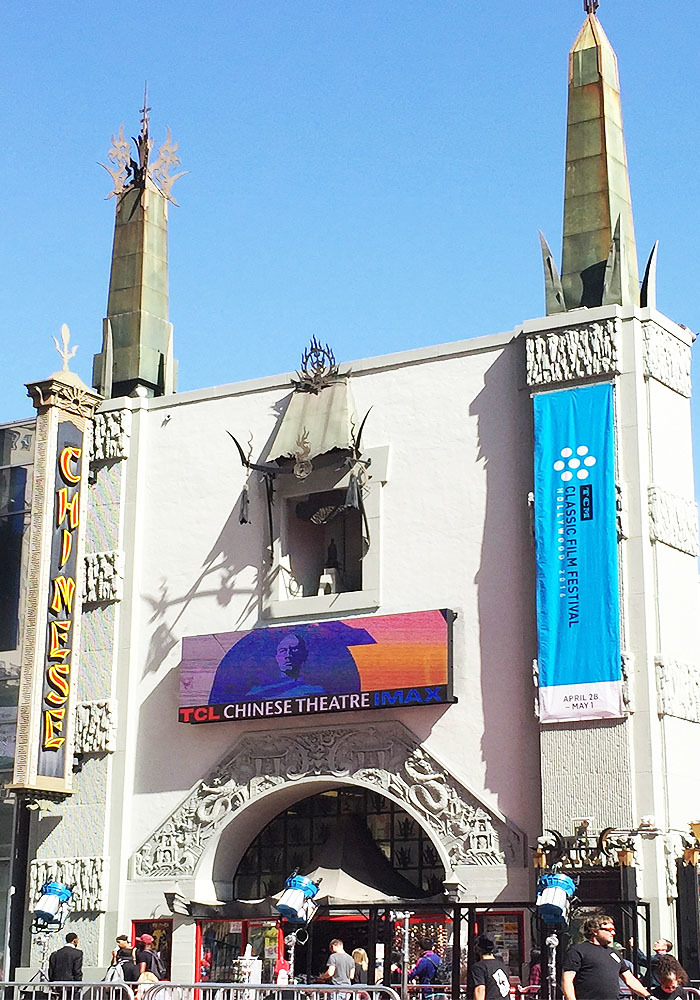 A Trip to the 2016 TCM Classic Film Festival

After months of anticipation, it's hard to believe the 2016 TCM Classic Film Festival is over! The festival ran this year from April 28th to May 1st and was a truly remarkable weekend filled with memorable experiences.

There are so many things happening simultaneously at the festival; I wish I could do it all over again, choosing some of the marvelous things I had to regretfully leave off my schedule. Somehow each festival is better than those which came before, quite a feat for TCM to pull off year after year.

This year I saw fifteen films, a tie with 2014; 2015 remains my top viewing year, with sixteen titles. Brand-new films and personal repeats were roughly split; seven of the films were first-time viewings, while I'd seen eight of the movies before. However, a couple of the 'repeat' titles I hadn't seen for a very long time so they still felt new.

The movies seen were a diverse group including pre-Codes, a Western, film noir, sci-fi, a musical, a Christmas perennial, Disney classics, screwball comedy, romantic melodrama, and a British film. About all that was missing was a silent film! One-third of the films were viewed in 35mm.

Aside from the movies, my favorite part of the festival continues to be the chance to reconnect with friends from the classic film and Twitter community, who come together each year from across the country -- indeed, the world! This annual reunion brings together people of varied ages and backgrounds, all united by our deep love and appreciation of classic cinema. It's safe to say that with every passing year we all value the chance to spend this special time together more deeply. It continues to be a happy, joyful occasion.

I had reconnected with several longtime blogging friends at the press conference, after which we said hello to more friends at a poolside 'early bird' party at the Hollywood Roosevelt Hotel.

I met up with a few more fellow bloggers for breakfast at Mel's Drive-In at Hollywood and Highland bright and early on Thursday morning. It was a great chance for everyone to catch up and enjoy some leisurely moments together ahead of a busy four days.

Soon it was time for the festival to kick off in earnest, and for the second year in a row I watched the red carpet arrivals from the bleachers, including Norman Lloyd, Darryl Hickman, Lee Meriwether, Leonard Maltin, Alec Baldwin, Ann Robinson, and Ted Donaldson.

I cut out of the bleachers early so I'd have time to make it into my first movie of the evening, A Tree Grows in Brooklyn (1945). I hadn't seen it since I was a teenager, so it was almost like discovering a new movie! Prior to the screening Ted Donaldson, who appeared in the film as a child, shared his memories, including his crush on Joan Blondell. The movie was interrupted near the end by a fire alarm, but fortunately we were eventually able to finish it!

Then it was off to my first-ever viewing of David Lean's Brief Encounter (1946), introduced by Illeana Douglas. I loved it and want to see it again soon.

On Friday morning I was in line bright and early for Marlene Dietrich in Shanghai Express (1932). It was the first film in what would be my busiest day of the festival, a five-movie day!

Shanghai Express had a beautiful digital restoration. It was my first time seeing the film, which I thoroughly enjoyed, especially since I love a good 'train' movie. It was so good it even overcame my lack of enthusiasm for Dietrich herself!

Prior to Shanghai Express, Jeremy Arnold briefly interviewed Nicholas von Sternberg, son of the movie's director, Josef von Sternberg. He joked that his father was nicknamed 'Midnight Joe' because of lengthy days of filming, and he had positive memories of Marlene Dietrich, including sitting on her lap when he was a little boy.

I had planned on another pre-Code, Double Harness (1933), as my second film; it was introduced by actor James Cromwell, son of the film's director John Cromwell. Unfortunately the line was so long, even an hour before the movie, that we were told most of us would not make it into the theater.

All's well that ends well as I had plenty of time to move a few blocks down the street to the Egyptian Theatre, where I saw a lovely 35mm print of John Garfield's last film, He Ran All the Way (1951). It was a terrific film noir, and I'm glad to have seen it. Most of the time slots at the festival had multiple films I would have enjoyed seeing, as this situation illustrates.

I stayed at the Egyptian for the third film of the day, Trapeze (1956), preceded by Illeana Douglas interviewing Gina Lollobrigida.

Ms. Lollobrigida described becoming a movie star; early on in her career she wasn't interested in movies so she demanded a huge amount of money to sign a contract and to her surprise the producers agreed. She told great stories, such as Humphrey Bogart advising her not to lose her accent, and she spoke movingly of her grief at Tyrone Power dying during the production of Solomon and Sheba (1959).

The 35mm print of Trapeze was the only poor print I saw at the festival; fortunately it wasn't scratched or jumpy, but the picture was grainy and distorted. However, I soon became absorbed in the story and was able to overlook the picture quality. Fortunately the vast majority of films screened at the festival are in outstanding condition.

Then it was off to the 'big' Chinese Theatre for It's a Wonderful Life (1946). The only film I saw in that theater during this year's festival.

A big part of the appeal of seeing It's a Wonderful Life was it was preceded by a presentation by Oscar-winning special effects wizards Ben Burtt and Craig Barron. Burtt and Baron thoroughly research their presentations, which are truly fascinating; I saw them twice during the week and both of their presentations were definite highlights.

Their Wonderful Life talk included information on the creation of the movie's 'snow,' the special effects for shots of George and Mary's home (I didn't know it was the Magnificent Ambersons house!), and never-before-seen home movies of the wrap party.

Making it even more special: sitting in my row a few seats over was a gentleman who was the Martini baby in the movie! When his big moment came, when the Martinis move into their new home, the audience burst into applause.

The last scene, panning all the amazing character faces, always gets me, and this viewing was no exception. Enjoying the movie in a pristine DCP print with an enthusiastic audience was a very special experience.

I ended my Friday at the Egyptian Theatre, where the Film Noir Foundation's Eddie Muller introduced one of my favorite films of the last few years, Repeat Performance (1947), starring Joan Leslie. I saw it in 35mm twice in 2013, and I was thrilled for the chance to see it in that format one more time.

My Saturday began bright and early with a 9:00 a.m. digital screening of Bambi (1942). This might have been my all-time favorite experience! The film was preceded by an exceptionally moving talk with Donnie Dunagan, who was the voice of Bambi as a child; his eloquence describing the doors the movie opened for him had the audience in tears before the movie ever began. Then the exquisite beauty of the film found my eyes misting more than once.

After Bambi it was on to Theater 4 for a completely different experience with Eddie Muller and David Wyler (son of director William Wyler) introducing a 35mm print of the pre-Code A House Divided (1931).

Like many others at the fest, I found A House Divided packed a real punch in its 70-minutes, with Walter Huston terrifying as a bad father and husband. The movie was shown as part of the festival's list of 'Discoveries,' and indeed it was.

Then it was on to the screening I was most looking forward to, The War of the Worlds (1953), the second film I saw introduced by Ben Burtt and Craig Barron.

Their presentation was an absolute blast, including a demonstration of how the sound effects for the alien ships were achieved. The digital print of the film looked great.

Leading lady Ann Robinson answered a couple of questions from her seat in the audience, and it was announced she would be greeting fans in the lobby after the movie. I was thrilled to take a photo of her!

Later that night I had one of the first spots in line for one of my all-time favorite comedies, Midnight (1939). Since the movie was in Theater 4 I knew it would probably sell out, and indeed it did.

One of the most insightful intros was provided by actress-filmmaker Bonnie Hunt, who spoke eloquently on Midnight's magic and its star, Claudette Colbert; I was particularly moved when Hunt recounted sharing a VHS tape of the movie to cheer patients when working in her prior career as an oncology nurse.

All too soon it was Sunday, the final day of the 2016 TCM Classic Film Festival!

I started the day with Douglas Sirk's All That Heaven Allows (1955), starring Jane Wyman and Rock Hudson. I've seen the movie a couple of times and loved it, but had never seen it on a big screen. It was shown in a lovely print, introduced by filmmaker Allison Anders.

I saw a second Disney film for the very first time at the festival; Old Yeller (1957) turned out to be another highlight.

Host Illeana Douglas shared that she had previously been unable to bring herself to watch the entire movie, but that she'd be staying and watching it with us! Afterwards Douglas interviewed actress Beverly Washburn, who said she was so thrilled to be invited to participate in a TCM Classic Film Festival screening that she cried when she got the news. It meant a lot to her that a project she participated in so long ago was being shown, especially as she and Tommy Kirk are now the only surviving cast members.

Although it's one of my favorites, I wasn't especially excited about She Wore a Yellow Ribbon (1949) because I just saw it at UCLA last October. However, there was nothing else in that spot I particularly wanted to see which also fit into my overall schedule, so off I went, seeing it in a theater for the second time in six months!

As it turned out, I'm happy I did, as seeing it again so soon confirmed this movie will always be a good choice. I'm sure I enjoyed it every bit as much as I did last fall. It was introduced by Keith Carradine and shown in a restored DCP print which will soon be released on Blu-ray by Warner Archive. It's such a rich, beautiful movie, and once again I noticed new details.

The 'official' closing movie in the Chinese Theatre was Cinema Paradiso (1988), but I felt the classic musical The Band Wagon (1953) was a more fitting festival finale, ending with the cast singing 'That's Entertainment!' '...This goodbye brings a tear to the eye, the world is a stage, the stage is the world of entertainment!'

The Band Wagon is pure joy, especially when Fred Astaire and Cyd Charisse perform 'Dancing in the Dark' and 'The Girl Hunt Ballet.'

After the final movie, it was time for the closing night party at Club TCM, where I reluctantly said goodbye to so many great friends, with promises to meet again in Hollywood in 2017!

I hope anyone considering attending the festival will make the effort in future years, as it's a one-of-a-kind experience. Many thanks to TCM and all who work so hard to put on such an unforgettable festival!