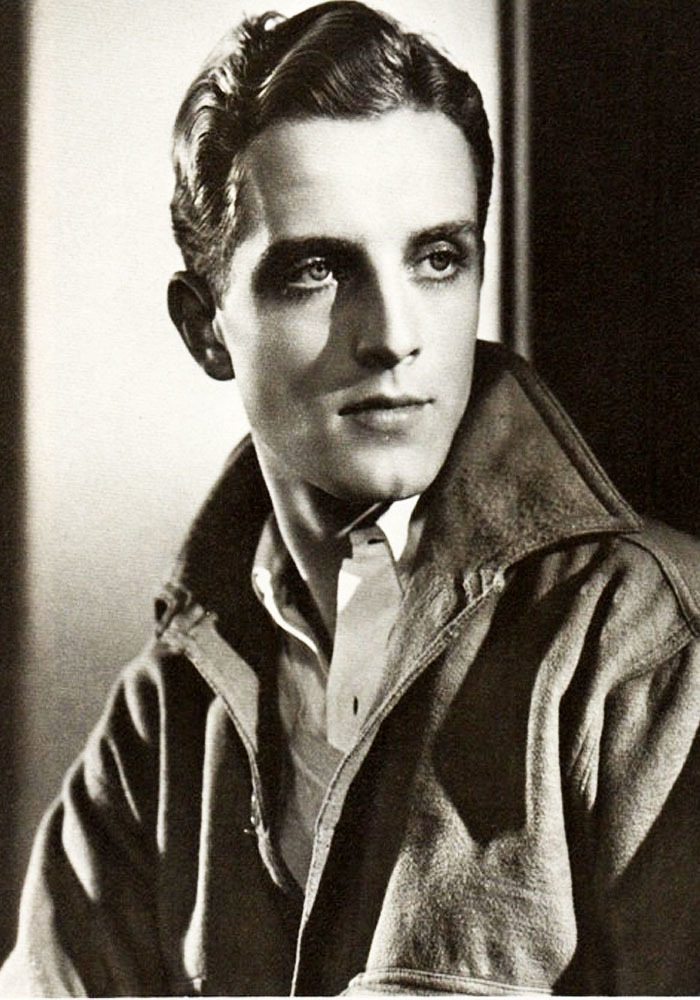 Phillips Holmes is a name seldom mentioned today in classic film circles, and if you're not a pre-Code fan, you may have never heard of him at all. He led a fascinatingly tragic life and during the pre-Code era of 1930 to 1934, he was seen in no fewer than 30 features on the big screen.

An appealing performer with a slight build and handsome, classical features, Holmes was nothing if not versatile -- his pre-Code films offer up a wide variety of roles, from sweethearts to scoundrels. Two of the best examples of the divergence in the parts he played can be found in features released in consecutive years: Night Court (1932) and Beauty for Sale (1933).

This feature, directed by Woody Van Dyke, tells the story of a crooked judge who frames an innocent housewife he suspects -- incorrectly, mind you -- of discovering his dirty dealings. Holmes plays Mike Thomas, who works as a taxicab driver to support his family, which consists of his devoted wife Mary (Anita Page) and their baby son.

Fun-loving and content, Mike couldn't be more pleased with his lot in life, although he demonstrates a hair-trigger jealous streak when it comes to his pretty young spouse. (In one scene, Mary tells him about a visitor she's had: 'Very handsome, with big blue eyes and curly hair . . . he got kinda familiar.' Mike flies into a fury, pronouncing that he'll kill the guy -- until Mary confesses she's talking about their son.) Overall, though, he's a decent, hard-working family man -- the kind of guy free from artifice, corruption, or duplicity, and finds it hard to discern such qualities in others.

Mike gets an unexpected taste of the real world when he arrives home one morning to discover from his neighbors that Mary has been arrested, charged with solicitation after cops found a half-dressed man in her bedroom. Mike is understandably outraged, refusing -- even unable -- to believe the worst about his wife. Even when he goes to see the Night Court judge (Walter Huston) who sentenced Mary to six months in prison, and learns that Mary admitted her guilt, Mike can't accept it: 'She couldn't have done it. I don't care if she swore on a stack of bibles a mile high; I don't believe she did it!'

But if Mike thinks he's having a bad day so far, he realizes he ain't seen nothing yet -- the judge promptly declares him unfit to care for his baby and forces Mike to turn the child over to the court. Devastated, Mike returns home alone, but it's not long before he starts piecing together the circumstances of his wife's arrest, all of which point to the Night Court judge, and works against all odds to put his family back together again.

Mike Thomas is the heart of this movie, a truly good man. He demonstrates this in scene after scene, from his loving care for his wife and baby, to his dogged determination to gain his wife's freedom. And in perhaps the most telling illustration of his persona, he refuses to offer up a lie that would easily have resulted in the judge's conviction for a murder he didn't commit. Despite the string of horrendous wrongs done against Mike and his family, his innate sense of decency and integrity won't allow him to exact revenge by lowering himself to the judge's level. It's a fascinating character, certainly one of the best in Phillips Holmes's career.

As hinted by the film's title, Beauty for Sale centers on life in an exclusive women's beauty salon, Miss Sonia's, and the lives and loves of three of the employees there: Letty (Madge Evans), Carol (the always delightful Una Merkel), and Jane (Florine McKinney), described by one character as 'refined and educated, and nice in spite of that.' Letty is in love with the husband of one of her clients, Carol has a 'sugar daddy' who keeps her in furs, and Jane is secretly seeing her boss's son, played by Holmes.

Holmes's part in this feature is a small but pivotal one. His character, Burt Barton, is a world-traveling mining engineer who has swept Jane off her feet with his innate charm and sophisticated good looks. We first meet Burt in his mother's salon. He merely has to appear in the shop and seconds later, Jane comes hurrying out from a nearby office so she can walk by him and daintily drop a cloth on the floor near his feet.

When they both bend down to retrieve it, Burt tells her, sotto voce, 'Lunchtime tomorrow at the same place.' We see him again later, sitting in his car, as Jane rushes to join him, asking if he's been waiting long. Burt smoothly replies, 'It always seems long when I'm waiting for you.' Jane gazes at him with shining, love-filled eyes, laughing gaily at Burt's mildly humorous remark. Burt obviously has this gal wrapped around his little finger (not to mention all the others).

In Holmes's biggest scene, Burt's true colors are revealed when he meets Jane at the salon after hours, at her request, for an important discussion. He's pleased to see her, until he finds out the subject of the discussion: Jane suggests they get married. And his response is not exactly what Jane -- or we -- would have expected. First off, he twice repeats, 'Married?' The first time he actually stutters over the word, and the second utterance is accompanied by a physical drawing back from Jane. He then laughs, and offers up this rejoinder: 'Yes, it is a quaint little custom, isn't it? Some people like it.'

Burt goes on to tell her he has taken a job in Russia, concluding that they -- perhaps -- can marry when he returns. But he soon finds out this solution simply won't do, for Jane is in, as they say, the 'family way.' Ultimately, Bart agrees to marry Jane -- well, what he says is, 'You win.' And if that doesn't give you an idea of what kind of cad we're dealing with, then perhaps this will: after Burt promises they will marry the next day, Jane learns, by happenstance, that Bart has actually sailed off into the sunset without her.

Incidentally, Burt offers up a telling bit of self-awareness before he heads off to Russia and out of the film for good. Before he sails, he runs into Letty and Carol, who mentions that she didn't know he meant to leave so soon. And Burt responds, 'Meant to? Lady if I did everything I meant to, I'd be a great guy.' He's the film's most unsavory character, and one whose actions set up the pictures most shocking scene.

If you get a chance, check out Holmes's performances in these two very different roles -- they offer excellent examples of the actor's versatility, not to mention some darned good pictures!