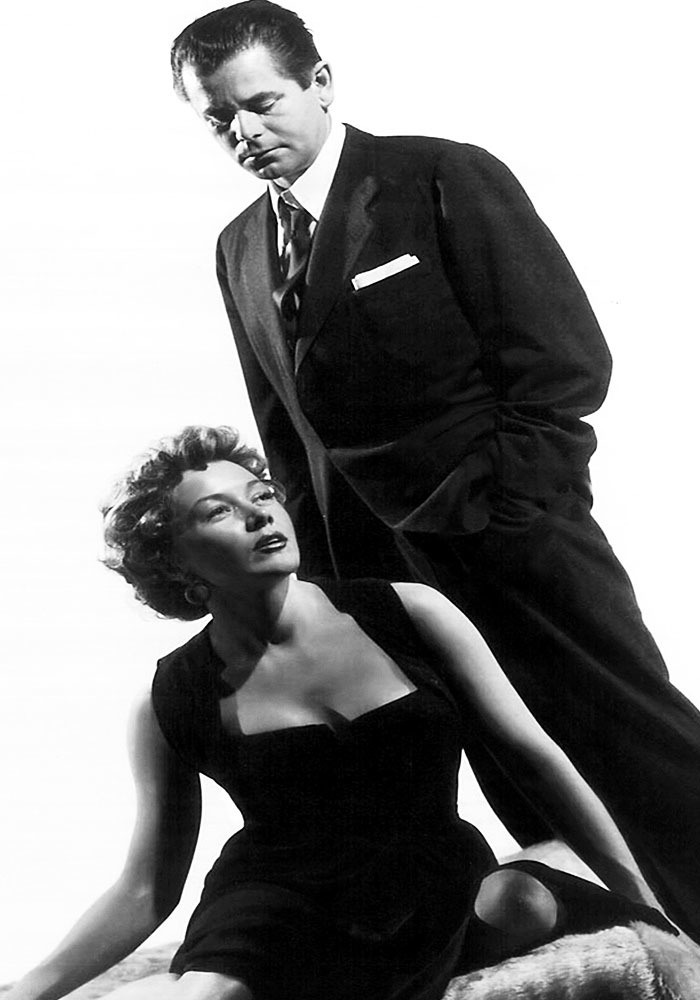 Creating an absolute definition of film noir is sometimes an elusive task; I've found over the years that a simplistic but revealing description of the era can be found in some of the frequently repeated words in the titles of the films themselves, some of which include 'fear,' 'night,' 'kill,' 'street,' 'kiss,' and 'big.'

Today, I'm taking a look at three 'big' noir films from the classic era: The Big Combo, The Big Heat, and The Big Knife. Each one is a first-rate picture featuring an outstanding cast and is worth checking out (or checking out again)!

Mr. Brown is one of film noir's most memorable personages, brought to life by the always-excellent Richard Conte who serves up a thoroughly unredeemable hood. There's no heart of gold in this guy; he'd trade his own grandmother for a strawberry soda if he got thirsty enough. But that's why he's so fascinating.

Mr. Brown is completely and irrefutably out for number one -- his motto, in fact, is 'First is first, and second is nobody.' He has a list of misdeeds as long as your left leg, including torturing Lt. Diamond by first blasting music in his ears through a hearing aid device, and then pouring high-octane hair tonic down his throat. Mr. Brown is the kind of character you can't take your eyes off of, even when he refuses to lay eyes on you, which he frequently does with Lt. Diamond, disrespectfully declining to face him while speaking to him. Talk about fellas you love to hate!

Favorite quote:'Joe, tell the man I'm going to break him so fast he won't have time to change his pants. Tell him the next time I see him he'll be down in the hotel lobby crying like a baby and asking for a ten dollar loan. Tell him that. And tell him I don't break my word.' --Mr. Brown

Glenn Ford stars as Sgt. Dave Bannion, a police detective whose ordered world is turned upside down after his beloved wife is killed in a car bombing intended for him. It turns out the attempt on Bannion's life is directly tied to his single-minded investigation of the suicide of a fellow cop and his unwavering sense of purpose only increases when he focuses on finding the men responsible for his wife's death.

Some of the film's oh-so-memorable characters include Bertha Duncan (Jeannette Nolan), wife of the dead cop, whose quiet graciousness and mournful visage mask a far darker nature; the brutish Vince Stone (Lee Marvin), who would just as soon burn a woman with a cigar -- or worse -- as put on his socks; and Mike Lagana (Alexander Scourby), one of the most refined gangsters you'd never want to meet.

The film's standout character is Debby Marsh, no question, excellently portrayed by Gloria Grahame. As Vince's girlfriend, Debby apparently has nothing to do all day except spend Vince's money, concoct tasty-looking cocktails, and amuse herself by subtly making fun of her boyfriend and his underworld pals.

Sadly, Debby gets a raw deal, joining Sgt. Bannion's wife in the Wrong Place at the Wrong Time Club. But what makes her interesting is she's no one-note character; Debby actually undergoes a series of transformations. She starts out as your typical good-time girl, satisfied to bookend each day by waking up at noon and haunting local nightclubs after dark. Then, after a particularly vicious encounter with Vince, she becomes morose and self-pitying, clingy and teeming with gloom. (Not that you can blame her.) Over time, though, she's not only able to understand, appreciate, and empathize with Bannion's pain, but her efforts to soothe his wounds help her to start forgetting her own. She, finally, taps into a core of strength which compels her to take a series of actions that help to bring down Lagana's entire operation.

Favorite quote: 'Clothes, travel, expensive excitement -- what's wrong with that? The main thing is to have the money. I've been rich and I've been poor -- believe me, rich is better.' --Debby Marsh

Not your typical noir, The Big Knife focuses on screen star Charlie Castle (Jack Palance), who's in the center of a maelstrom -- his dictator-like studio head, Stanley Hoff (Rod Steiger), is pressuring him into signing another seven-year contract; his beloved, estranged wife, Marion (Ida Lupino), wants to reunite, but also wants Charlie to leave Hollywood; and Charlie's harboring a number of secrets, including his involvement in a hit-and-run accident that killed a child, and his brief affair with the wife of his press agent.

In a film practically overflowing with unlikable characters, my favorite has to be Stanley Hoff, who is so mean-spirited, overbearing and callous, he simply becomes larger than life. Steiger does a bit of scenery chewing in his portrayal of this repugnant leader, but there's no denying the character's fascination factor. When we first meet Stanley, he's paying a house call to Charlie, in a personal-touch effort to secure his signature on the contract. He enters the home accompanied by his ever-present lackey -- the oddly monikered Smiley Coy (Corey) -- his piercing eyes shuttered by dark sunglasses and spouting deceptive pleasantries that include admiring Charlie's bathrobe, inviting the actor to join him in a day at the local racetrack, and expressing his oh-so-sincere hope for Charlie's reconciliation with his wife.

But once those banal topics are covered, Hoff doesn't waste a single second in broaching the subject of Charlie's contract, employing every weapon in his arsenal to secure the desired signature. Hoff first waxes nostalgic about the 'vitality of talent' he recognized in the actor at their initial meeting years earlier. Then he shares a lengthy personal story about his wife to illustrate his belief that 'the woman must stay out of her husband's work when he earns her bread and butter.' And finally, when these fail to do the trick, he uses good old-fashioned blackmail. It's quite masterful, really.

Favorite quote:'Please, you'll excuse me for speaking with my eyes closed, but it helps me to see better.' --Stanley Hoff