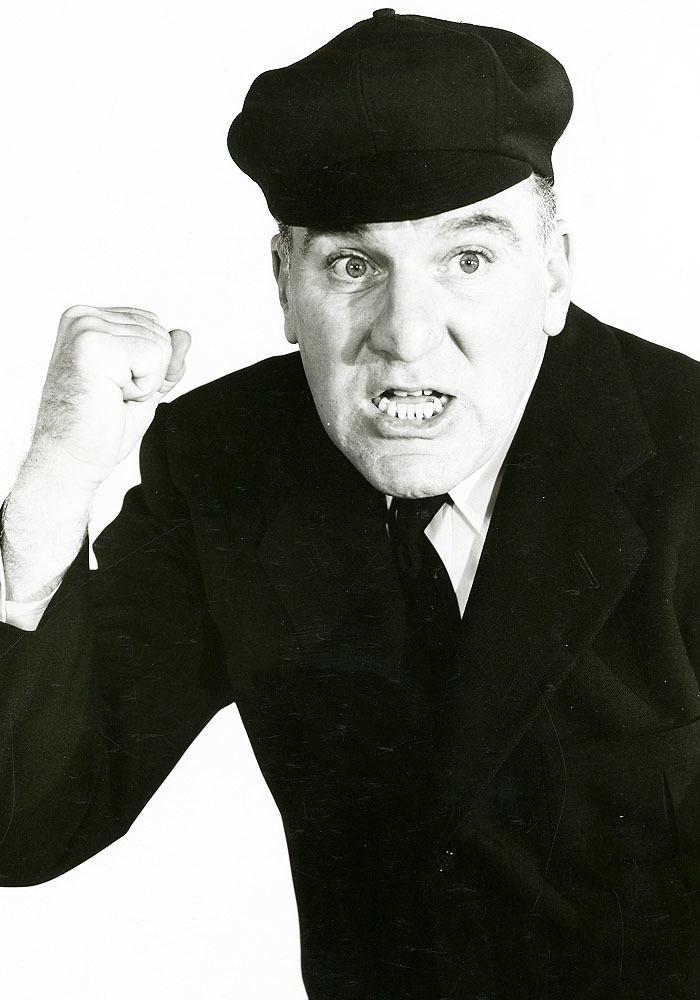 As a lover of both baseball and old movies, I enjoy discussions of the best films about the national pastime. Unfortunately, too often arguments begin, say, 40 years ago and concentrate on modern times while excluding fine works from Hollywood's past. The Pride of the Yankees is deservedly beloved; one of the iconic movies of the golden age of studio filmmaking, but it often stands alone as the token 'classic' choice in the conversation.

Let's examine some underrated baseball films on DVD that are a little more vintage than Bull Durham. Not all of these films are classics, but each has something to offer for movie lovers and especially for those looking to celebrate baseball. Plus many feature longtime character actor (and beloved frequent guest of my TV Time column) William Frawley, an avid fan in real life.

Kill the Umpire: This delightful 1950 comedy starts with one of the essential conceits of old baseball movies -- the umpire is a scoundrel, quite possibly partially blind at best, and biased against your team at worst. William Bendix is an ex-ballplayer desperate to find a meaningful vocation after his playing career and does the unthinkable -- joining the enemy by becoming an ump.

Bendix's character resists the notion with every fiber of his being, but eventually we get a surprisingly wild ride filled with brawls between fans and umpires, outright riots, and an over-the-top chase scene, all courtesy of screenwriter Frank Tashlin. This movie should be an annual tradition each Opening Day.

(William Frawley alert: He shows up as the owner of an umpiring school.)

Safe at Home: On the same double-feature DVD with Kill the Umpire is this pleasant 1962 effort, one geared to a younger audience. A red-blooded American boy can't resist bragging that his dad, who is too busy working to attend his youth ballgames, is pals with Mickey Mantle and Roger Maris. Trouble ensues as young Hutch sneaks his way to Florida to try to lure the players into showing up for his friends.

Safe at Home is no masterpiece, and Mantle and Maris received no Academy Award consideration (not that they were hurting for attention following a season in which they hit 54 and 61 homers, respectively), but this is well made and accomplishes what it intends. It's a solid family movie with just a nice hint of adventure and a good moral message for kids. (William Frawley alert: He's Big Bill Turner, a gruff but lovable Yankee coach.)

The Babe Ruth Story: Bendix's great work in Kill the Umpire is too often overshadowed by his performance as Babe Ruth in this notorious biopic. I'm not claiming this is a gem, but the criticism of it as one of the all-time worst movies, not just baseball movies, is overblown. Instead, I see it as a likable movie with a few terrible scenes. If you can get around some of the howlers, you get a story often based more on fantasy than reality, but an enjoyable movie better than its reputation, a must for lovers of the sport.

Speedy: Fortunately, baseball's all-time legendary figure appears in other films. Babe Ruth stars in the 1920 silent Headin' Home as a (highly) fictionalized version of himself; he plays himself in Pride of the Yankees; and he stars and helps compose a song (!) in the memorable Vitaphone short Home Run on the Keys (please alert me as soon as THAT debuts on DVD). Yet for my money the best way to experience the Bambino on film is his cameo in Harold Lloyd's classic Speedy.

The Hall of Famer has a brief cameo when Lloyd's title character drives him to the ballpark, and though we don't get to hear him speak, just seeing him is as much a thrill for us as it is for Speedy. Lloyd's Speedy takes Ruth on a wild ride through the streets as the bewildered player makes comments from the backseat, and in each shot something about the slugger stands out. He is not just George Herman Ruth, but THE BABE, and this sequence makes good use of his charisma, showing what a big deal he was in his prime.

Check out my colleague Kendahl Cruver's review for more on Speedy.

Butter Fingers: The entire Reel Baseball compilation from Kino is a treasure, including the aforementioned Headin' Home along with various short subjects and cartoons; including a spirited 1922 dramatic reading of Casey at the Bat I might play on a loop next Halloween to scare neighborhood children.

This 1925 Billy Bevan short holds up much better. It's a comedy involving love, gambling, and a nifty trick pitch that looks pretty cool on-screen. I'll bet a lot of critics walked out of the nickelodeon complaining special effects were ruining the movies.

The Pride of St. Louis/ The Kid from Left Field: Dan Dailey doesn't have the star power of Gary Cooper, and none of his roles have the cachet of Coop's Lou Gehrig in Pride of the Yankees, but he deserves acclaim for his work in these two very different flicks. In Pride of St. Louis, Dailey plays real-life Hall of Fame pitcher-turned broadcaster Dizzy Dean. Dean was self-centered, vain, and crude, but he was one heck of a charmer.

The movie has ol' Diz do things that would never fly today (if they did then), like arguing with his manager and directly blaming his teammates for his losses. Off the field Dean shows little regard for anything his wife Pat might want to do. Yet Dailey, though not necessarily capturing Dean's charisma, somehow makes the player a likable on-screen character.

In The Kid from Left Field, Dailey is an alcoholic ex-player and single father working as a peanut vendor for his former team but he alienates those around him with vocal complaints and second-guessing about the club's operation. Through a bizarre turn of events involving his devoted son becoming manager, Dailey's character searches for redemption, but not before we see him stumble home after squandering some of the family's hard-earned money at the bars. Again Dailey demonstrates his talent by making this person sympathetic and not turning off the audience.

The Kid from Cleveland: It's not surprising that so many baseball movies revolve around the New York teams of the past -- the Yankees, Dodgers, and Giants -- but it's still refreshing to see more variety on screen. I reviewed this unassuming social problems picture a few months ago, and what stands out is the presence of so many Cleveland Indians players and personnel -- men like Tris Speaker, Bill Veeck, and Satchel Paige.

Angels in the Outfield: Speaking of non-Yankee films, I must give full credit to a movie that portrays the success (with perhaps a little divine intervention) of my own favorite team, the Pittsburgh Pirates. Sure, I'm biased, but the original Angels is one of the first baseball movies I saw as a child, and it's still a lot of fun. The romance between Paul Douglas and Janet Leigh doesn't always ring true -- they are about 20 years apart in age, but it looks like more -- but there are a lot of player cameos, a fine supporting cast, and great looks at the Pirates' old ballpark, Forbes Field.

Rhubarb: If you only see one comedy about a cat who inherits ownership of a major league baseball team, make it Rhubarb! Ray Milland's more famous baseball picture is the well-regarded It Happens Every Spring, but this one is just as wacky and maybe a little more entertaining. While I love the modern film Eight Men Out and its depiction of the gambling problems that peaked with the infamous 1919 'Black Sox' World Series, Rhubarb takes a different spin on the issue, showing how catnapping criminals can influence a series. As great as Pride of the Yankees is, it doesn't have a scene in which a manager sics his team's mascot dog on the opposing team's owner.

This cartoon lampoons just about every baseball cliche in eight minutes: Bad umpiring, obnoxious fans, trick pitches, and more. In one of his finer performances, Bugs Bunny, arguably one of the only icons of the 20th-century as charismatic as Babe Ruth, shows off his versatility with a brilliant comic performance AND an impressive display of athletic ability.

(William Frawley alert: Sadly, he's neither in this nor in any other Looney Tune to my knowledge, but I have faith that someone will enter an Argentinean mine and find a pristine print of a lost Bugs Bunny/William Frawley team-up one day. In the meantime, you can see Frawley in prominent roles in Alibi Ike, It Happened in Flatbush, and Whistling in Brooklyn, all worthy choices for baseball fans.)