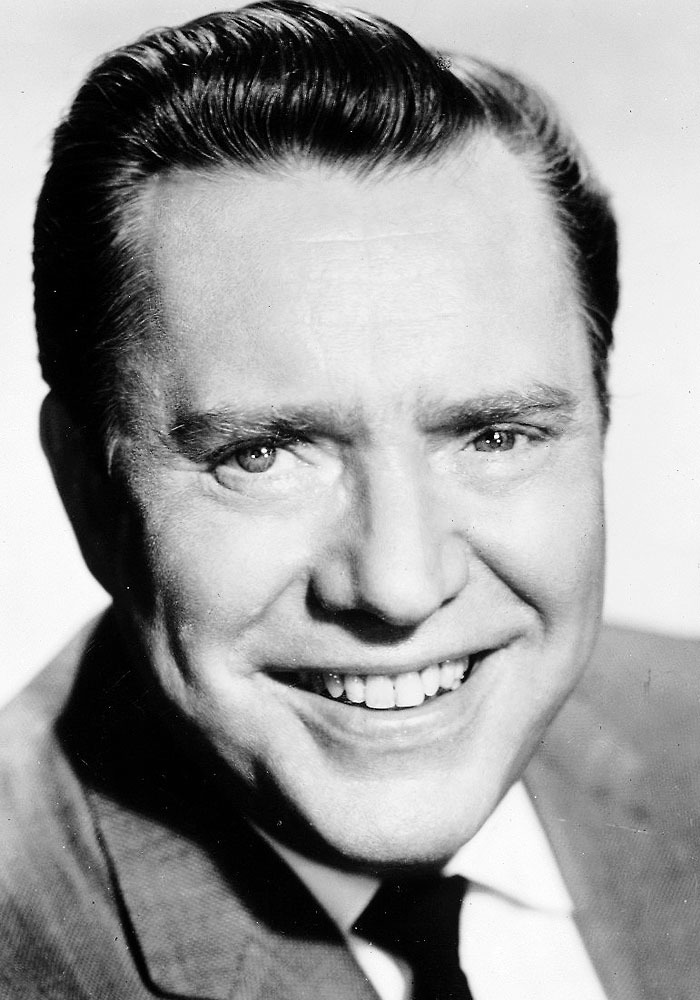 Oscar-winning actor Edmond O'Brien was born in New York just over a century ago, on September 10, 1915.

O'Brien made his Broadway debut at the age of 21 and four years later made his film debut opposite Charles Laughton and Maureen O'Hara in The Hunchback of Notre Dame (1939). He continued to work in theater, including starring as Mercutio opposite Laurence Olivier and Vivien Leigh in a 1940 production of Romeo and Juliet, and also appeared in a handful of other films before leaving the screen for service in World War II.

O'Brien's movie career kicked into high gear after the war, with appearances in many crime and film noir classics; O'Brien's noir filmography in and of itself earn him a notable place in film history. But there was much more to his career, including an Academy Award for Best Supporting Actor in The Barefoot Contessa (1954). A decade later O'Brien received a second Supporting Actor nomination for Seven Days in May (1964).

Off screen O'Brien was married to Nancy Kelly for a year in the early '40s, and then married Olga San Juan in 1946. O'Brien and San Juan were married nearly 30 years, and although they eventually divorced, neither remarried. Two of the O'Brien children, Maria and Brendan, became actors themselves, while daughter Bridget worked in TV news.

Edmond O'Brien died May 9, 1985 at age 69. He is buried at Holy Cross Cemetery in Culver City where, along with the years of his birth and death, his gravestone reads simply 'Edmond Joseph O'Brien. US Army.'

What follows is a list of personal favorites starring Edmond O'Brien, heavy on film noir, with a touch of romantic comedy on the side:

The Amazing Mrs. Holliday (1943) - This is admittedly a vehicle for Deanna Durbin, and indeed I feel it's one of her best films, in which she plays a young teacher who has fled war-torn China with eight orphans in tow. O'Brien is part of what makes the movie so enjoyable; his immediate affection for the group of children who unexpectedly land on his doorstep in San Francisco is very appealing, and he and Durbin have a pleasing chemistry.

The Killers (1946) - O'Brien plays the dogged insurance investigator who pieces together the life of a man (Burt Lancaster) bumped off by a pair of hitmen (William Conrad and Charles McGraw). This was O'Brien's first film after the war and he makes the most of his role amidst a superb cast which also includes Ava Gardner and Sam Levene. While O'Brien often played tortured characters, here he leaves that to Lancaster and is a real charmer as the enthusiastic detective.

For the Love of Mary (1948) - O'Brien reunited with Deanna Durbin in this delightful romantic comedy. Deanna plays a White House telephone operator romanced by three men, O'Brien, Don Taylor, and Jeffrey Lynn. Several Supreme Court justices and even the (unseen) President of the United States intervene in Mary's life to play matchmaker, with amusing results. This isn't one of Deanna's better-known films but I find it a real 'feel good' movie which has stood up to repeat viewings.

White Heat (1949) - O'Brien is again a good guy as the FBI agent who goes undercover in prison to get the goods on psychopathic killer Cody Jarrett (James Cagney) and his gang. He's quick-thinking and confident, giving the audience someone to root for amidst a crowd of lowlifes.

711 Ocean Drive (1950) - This film is a particular favorite of mine, with a superb performance by O'Brien as a telephone lineman who improbably ends up running a bookie operation, then runs into trouble when a mobster (Otto Kruger) wants in on the action. Things get more complicated when O'Brien falls for Joanne Dru, who plays the wife of the mobster's right-hand man. O'Brien is one of the most sympathetic crooks in the movies, a nice guy in a bad business. There's even a certain satisfaction when he hires a hit man to wipe out Dru's husband after he beats her. There's some especially great location photography, with the climax filmed at Hoover Dam.

Between Midnight and Dawn (1950) - A 'docu-noir' about the lives of cops (Edmond O'Brien and Mark Stevens) who fought together in the South Pacific and now are teamed up in a police squad car. The men are both sweet on a police dispatcher (Gale Storm), but their biggest problem is a mobster (Donald Buka) who escapes from prison and is coming after them... One wonders if this film impacted the development of later police shows such as Adam-12, with O'Brien's older, more mature cop mentoring the less experienced Stevens.

D.O.A. (1950) - D.O.A. is one of the most unusual and unforgettable crime films of all time. Frank Bigelow (O'Brien) walks into an L.A. police station to report his own murder. Bigelow is shocked to learn he's dying due to a 'luminous poison' and races to solve the mystery of who wants him dead and why before time runs out. O'Brien is terrific as a man who might be a bit of a heel, having difficulty committing to his girlfriend (Pamela Britton), then suffering the heartbreak of realizing what's really important when it's too late. Like 711 Ocean Drive there is some terrific location shooting, in both San Francisco and Los Angeles; the L.A. locations include the famed Bradbury Building.

The Hitch-Hiker (1953) - O'Brien and another favorite actor of the era, Frank Lovejoy, play best buddies headed on a fishing trip. Being good-natured types they pick up a hitch-hiker (William Tallman) they believe has run out of gas, but it turns out he's a psychotic killer who's already murdered a few other people that week. Under Ida Lupino's direction, O'Brien and Lovejoy are superb as a pair of 'regular Joes' who can't quite believe what is happening to them, which makes the film all the more realistic and scary. It's an edge-of-the-seat thriller which packs quite a punch.