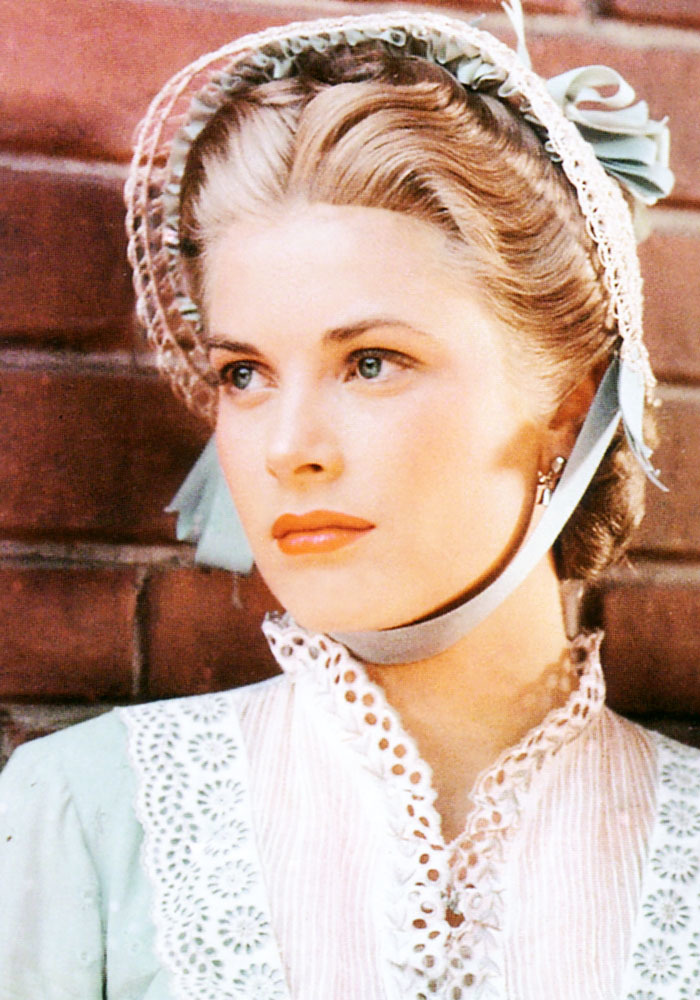 The West of the Western movie has always been a masculine place. Looking at it impartially, it's a bit odd because women have been associated with nature and freedom, while men have been the conventional law and order types. So we might imagine that men would be more urban creatures, setting up businesses and building churches, while women would relate to the wide open spaces of the frontier. But the reverse is true.

In the Western myth women are the civilizers. The men in Westerns roam free, explore, mine, punch cattle, drink in saloons, and get into gunfights. The women run the home, teach school, organize temperance leagues and go to church. Mining camps, especially, were full of men who had left their families back home to make money on their own. Even when settlers came in and towns started to grow it has been estimated that men may have outnumbered women in the West by as much as 7:1.

In the Hollywood West women are usually genteel, prim and against violence. A classic example is Amy (Grace Kelly) in High Noon. Amy does everything to persuade her new husband, the marshal, to abandon the town and go away with her rather than face the gunmen. But, of course, in Westerns 'a man's gotta do what a man's gotta do' (and eventually Amy stands by her man, abandoning her Quaker principles by shooting the man who is about to kill her husband in the back).

Or there's Clementine Carter (Cathy Downs) in My Darling Clementine. Clementine is all grace and Eastern civilization (actually she's too prim by half) juxtaposed with the tough Western gunmanship of Wyatt Earp (Henry Fonda). Gene Tierney does the same to Fonda in The Return of Frank James. She's not so prim but she's just as urban and urbane. In Four Faces West, a charming 1948 B-Western with Joel McCrea, Frances Dee is a nurse (she could just have well have been a schoolteacher), also from the East, shocked by the West's violence and brutality before bringing McCrea to civilization.

In The Gunfighter, Jimmy Ringo (Gregory Peck) is an aging gunman wanting to hang up his irons but he knows that sooner or later some punk kid is going to get him. He wants to see his estranged wife and son one last time. What is his wife doing? Why, she's the schoolteacher, of course. School teaching was a sign of respectability, civilization for women in fact; Carroll Baker in Cheyenne Autumn or Molly Stark Wood in The Virginian is of the same mold.

If women in Western films aren't urban schoolteachers, they are sturdy ranchers' or farmers' wives, again often against violence. In Shane, Marian Starrett says, 'Guns aren't going to be my boy's life.' And when Shane answers that 'a gun is a tool, no better or worse than any other tool, an axe, a shovel, or anything. A gun is as good or as bad as the man using it,' Marian replies, 'We'd all be better off if there wasn't a single gun in this valley, including yours.'

These women epitomize sexual morality too. The love of Shane for Marian Starrett or Ethan in The Searchers for his sister-in-law is threatening to the standards of civilization and has to be suppressed or sublimated. Shane's chaste courtship of Marian is the courtly love of a knight for an unattainable lady.

The redemptive woman became a standard trope of the early Western, especially those of William S. Hart, Hell's Hinges (1916) for example. The good woman who makes a Western badman see the error of his ways and reform is a classic plot device and has been since The Virginian in 1902 or before.

But these women are symbols of civilization in a male drama of a lawless West. If a woman received top billing in a Western -- Marlene Dietrich in Destry Rides Again, for example -- it was for commercial/box-office reasons, not because she was playing the dominant role in the story.

Occasionally a woman was the heroine of a Western. But this was incredibly rare in the early days. Lillian Gish excelled as a girl driven mad by the frontier life in the silent movie The Wind in 1928.

From the 1930s on, colorful women of the West like Annie Oakley, Calamity Jane or Belle Starr were featured in movies, though often the pictures were tales of how these women found true love with the male lead.

Where they weren't symbols of decency and civilization, female characters were often dancers or saloon girls; these were euphemisms, of course. The Puritanism of the 1930s, '40s and '50s, the Hays Office censors and Hollywood self-censorship wouldn't allow the use of more detailed descriptions and characterizations.

Foreign women are especially likely to play saloon roles. Marlene in Destry was Frenchy (naturally, for a German). In High Noon, Mexican Helen Ramirez's past is alluded to. Mrs. Miller (Julie Christie) in McCabe & Mrs. Miller is English.

If American, women were sometimes named after places, presumably the places where they plied their trade, like Dallas in Stagecoach or Chihuahua in My Darling Clementine, as a sign of doubtful respectability.

By the late '60s and early '70s the professions of saloon gals were being more blatantly described, like Julie Christie's Mrs. Miller, Faye Dunaway's Mrs. Pendrake in Little Big Man, Jeanne Moreau's Martine in Monte Walsh or Stella Stevens' Hildy in The Ballad of Cable Hogue. In the 1980s we had Lorena in Lonesome Dove and the abused women who band together to revenge one of their own in Unforgiven. The mealy-mouthed oblique references of the past had been banished in a blaze of '60s and '70s frankness.

In the standard Western plot, the male hero, Randolph Scott, for example, dallies with two belles, a prim-and-proper one and a racier saloon gal, finally opting for the decent lady with whom he departs in connubial bliss in the last reel. There were a million examples of this but take, as just one, Powder River (1953).

In 1969 Kim Darby's spirited Mattie bossed cranky old John Wayne about in True Grit. She was an equal partner in the chase, despite her youth. Women weren't just adjuncts any more.

There was another trend of strong, dominant women, sometimes shown as bandit chiefs. These women wore pants and low-slung holsters. Dietrich was the mob boss who manipulated men in Fritz Lang's Rancho Notorious in 1952. Barbara Stanwyck commanded her Forty Guns in 1957 and, in a lighter vein; Jane Russell did the same in Son of Paleface. Then there isJoan Crawford in Johnny Guitar. Stanwyck made rather a specialty of grande dame Western women. In The Violent Men or Cattle Queen of Montana she was a cattle baroness and not a very scrupulous one either. Later she ruled over The Big Valley on TV.

In the 1990s there was a revival of the woman-with-a-gun character. In Bad Girls (1994) four tough and feisty working women go on the run pursued by Pinkertons. In The Quick and the Dead (1995) Sharon Stone does a Clint impression as a female gunslinger out for revenge. And in this century Selma Hayek and Penelope Cruz were Bandidas in Mexico.

One of the great things about modern Westerns is their women. Gone are the prim teacher/saloon gal stereotypes. We begin to see the Western woman as she must have been, as real people with their own characters and agendas. Take a modern film like The Missing. Cate Blanchett is a single woman living the ferociously hard life of the frontier. She runs the place, doctors the local folk and she sets out to find her abducted daughter with courage, skill and force. This would have been a male role in earlier Westerns. Or watch the recent The Homesman where Hilary Swank's Mary Bee Cuddy is incredibly strong and resourceful.

This notion was actually prefigured in the splendid Westward the Women, back in 1951, in which misogynistic Robert Taylor learns respect for feminine true grit as the tough women fight off Indians in the scorching desert. Four years later Taylor again surrendered to the dominant woman -- Eleanor Parker's amorous pioneer -- in Many Rivers to Cross.

We've come a long way from My Darling Clementine. Westerns have always reflected the mores and culture of the era in which they were made, no matter what. In fact Westerns of the 1940s and '50s were probably more reflective of the standards of those decades than they were of those of the frontier 1870s and '80s. So it is not surprising that, in what is still a very male world -- the production of Western movies -- women in 21st century pictures are independent, stronger and have more character.

In reality, the woman of the West did not go about with a Colt on her hip and have quick-draw showdowns against male gunslingers at high noon. They were, instead, the foundation of Western expansion, settlement and society.

Are we closer now to the real woman of the West? Ah, now that's a question.