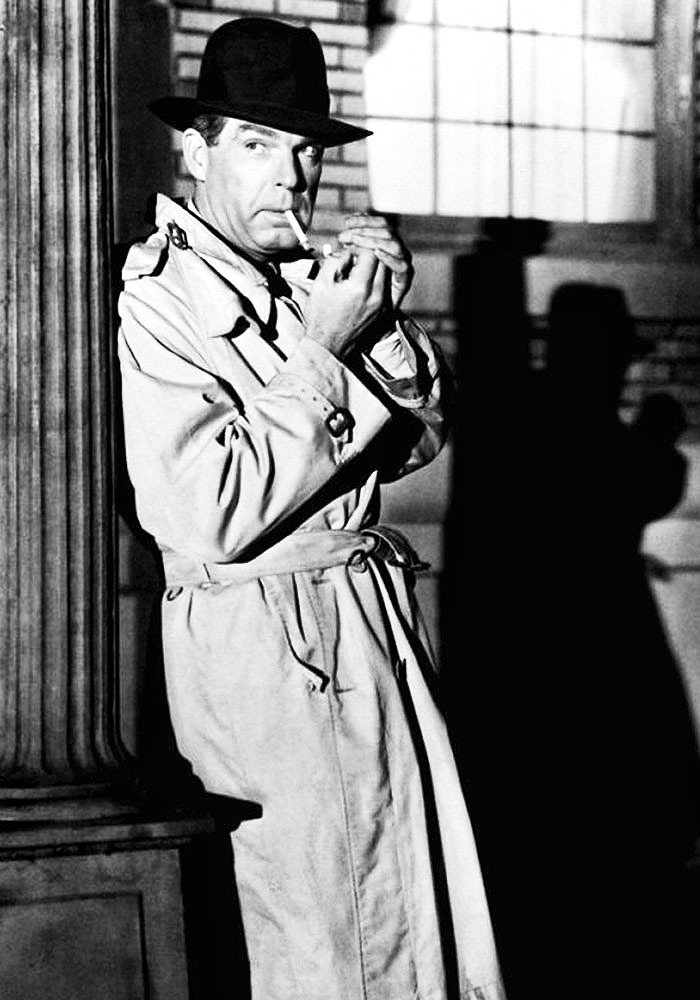 I'm continuing my quest to shine the spotlight on those films noirs that are not necessarily well-known, but are certainly worthy of your time. This installment focuses on three Columbia Pictures features from the 1950s that will put you on the edge of your seat and keep you there for a while.

Some may call Pushover a 'poor man's Double Indemnity' -- and the label is understandable. Like Double Indemnity, Pushover stars Fred MacMurray as a respected professional man pulled into a web of deception and murder at the urging of a beautiful blonde. But that's where the similarities end. In Pushover, MacMurray's character, Paul Sheridan, is an undercover cop assigned to keep an eye on Lona McLane (don't you love that name?), a bank robber's galpal portrayed by Kim Novak, in her first credited role. While maintaining a round-the-clock surveillance of Lona's actions from an apartment across the street, Paul blurs the line between his professional and personal life, and before long he's head over heels. When his lover proposes that they kill her boyfriend and abscond with his stolen bankroll, it doesn't take Paul long to sign on. Like many best-laid plans, though, this scheme doesn't turn out quite as intended.

Favorite character: The character I like best is not one of the principals; it's Rick McAllister, Paul's partner on the surveillance job. When we first meet him, Rick is stony and cynical -- not exactly a woman-hater, but certainly not a cheerleader for the female side. In his business, he's seen 'em all: 'B-girls, hustlers, blackmailers, shoplifters, drunks. You know, I think I'd still get married if I could find a half-honest woman,' Rick says. 'There must be a few around.'

As it turns out, there's one who lives right next door to Lona -- a hard-working nurse named Ann (Dorothy Malone) -- and Rick can't keep his eyes off her. Before long, Rick admits: 'I wait for her to come home. I worry about her -- wonder what she's doing.' He finally comes face-to-face with Ann in a memorable meet-cute in which he plays Sir Galahad, rescuing her from the attentions of an overly amorous date. Played by the handsome and beefy Phil Carey, Rick is a hard-nosed cop on the outside, but a big ol' teddy bear on the inside. Juxtaposed against the rather seedy goings-on involving Paul and Lona, Rick's schoolboy crush on Ann is a sweet and welcome diversion.

Trivia tidbit: In an early scene, Kim Novak emerges from a movie theater showing the 1953 western, The Nebraskan. Released by Columbia Pictures, the film stars none other than Phil Carey.

Without a doubt, Gloria Grahame is one of my favorite film noir actresses. Her sultry, sin-filled demeanor was practically made for this shadowy era of filmmaking, and in Human Desire, she doesn't disappoint. Here, she's Vicki Buckley, a sexy and duplicitous housewife whose feminine wiles lead to dire circumstances for both her justifiably jealous husband (Broderick Crawford) and her naive lover (Glenn Ford). The film was directed by noir veteran Fritz Lang, who shares my affinity for Grahame, saying she 'represents today's femme fatale. While this type changes with the period, their power over men always comes from a combination of a calculating nature and a glamorous body.'

Favorite character: On the surface, Glenn Ford's Jeff Warren is an uncomplicated guy. A railroad engineer and veteran of the Korean War, he's a pleasant, jovial fella, who wants nothing more exciting than a 'big night at the movies.' He's the kind of man you'd like to share a beer with, but he shows he's more than just an easygoing ex-solider when he encounters Vicki. He's drawn to her despite learning that she's married, and even after (or maybe more so) suspecting her involvement in a murder of a railroad boss. Turns out he's not so uncomplicated after all.

Trivia tidbit: Human Desire reunites Glenn Ford and Gloria Grahame after their starring turn the year before in yet another Columbia noir, The Big Heat.

Favorite quote: 'All women are alike. They just got different faces so the men can tell them apart.' Jean (Peggy Maley)

A unique little noir, Nightfall brings together a melange of offbeat characters in a story filled with larceny and murder. At the center of the action is freelance artist Jim Vanning (Aldo Ray), whose past catches up with him in the person of two completely conscienceless killers (Brian Keith and Rudy Bond) in search of 00,000 taken from a bank heist years before. There's a girl, Marie Gardner (Anne Bancroft), a model paid by the killers to arrange an encounter with Jim. And the group is rounded out by Ben Fraser (James Gregory), an insurance investigator hot on Jim's tail. Directed by Jacques Tourneur (who also helmed Out of the Past), the film's breathtaking climax takes place in the cold and snowy landscape of Wyoming, offering up one of noir's most unique settings -- and horrifying deaths.

Favorite character: Hands down, Marie Gardner. When we first meet Marie, in a bar, she's begging Jim for five dollars to pay her bar bill. Before the evening's out, he's invited her to dinner, but we're not surprised. Despite her initial impression, she's so charming and lovely that it's completely understandable why Jim is attracted to her -- and why he shows up on her doorstep later, even after she double-crosses him. Marie possesses an inner goodness, though, that quickly rises to the surface and justifies Jim's faith in her. (Incidentally, the film includes a fashion show in which Marie is featured wearing a series of eye-popping outfits designed by Jean Louis.)

Favorite quote: 'You don't know what it is to live with your back against the wall, Marie. Inside you change. You really change.' -- Jim Vanning (Aldo Ray)