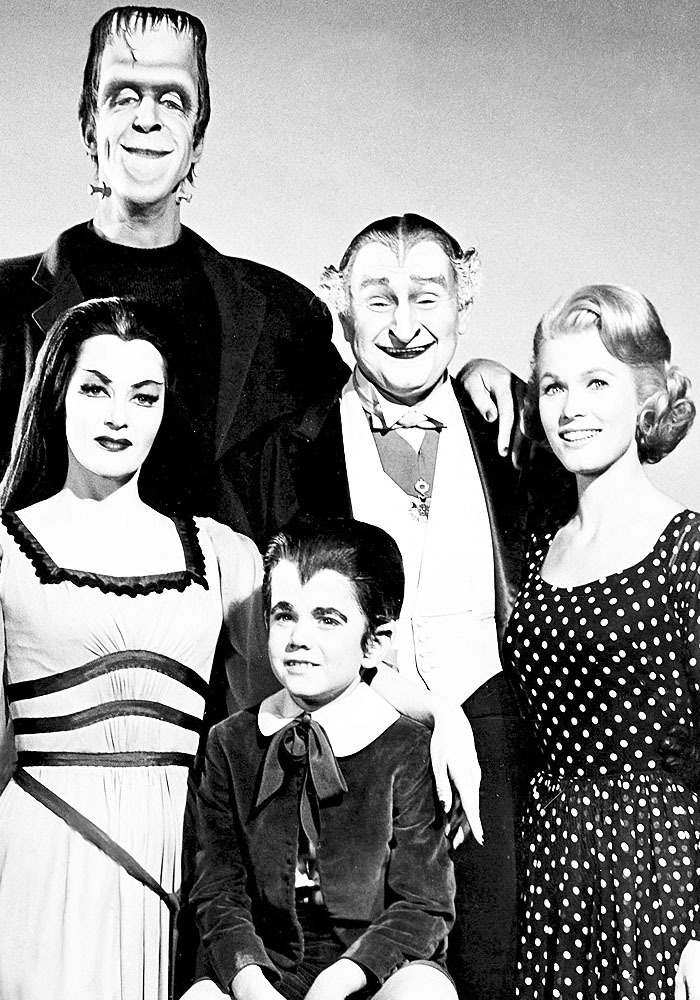 TV TIME: Celebrate the season with The Munsters!

Halloween is an ideal time to revisit one of television's greatest sitcom families, The Munsters. Though it ran only two seasons on CBS, the comedy about the unusual inhabitants of 1313 Mockingbird Lane is one of the most fondly remembered shows of its era and continues to thrive in reruns, streaming and DVD.

At first glance a show about equivalents of Frankenstein's monster and Dracula living in suburbia, oblivious to their own status as 'monsters' to everyone else, seems like a kiddie show. Indeed, the makeup and special effects are a huge part of the show's appeal, and monster-loving children of the 1960s (and later generations discovering the reruns) surely appreciated the unsubtle sight gags and simple storylines. Yet I appreciate The Munsters more as an adult than I ever did as a youth.

The broad comedy holds up because the cast is so talented and for the top-notch talent behind the scenes. After Allan Burns and Chris Hayward created the basic premise, Universal gave the concept to the established team of Bob Mosher and Joe Connelly (writers of Amos and Andy, creators of Leave It to Beaver) to supervise the series. The result is a cartoonish but still relatable family sitcom. My favorite aspect isn't the number of times a terrified onlooker speeds away after seeing a Munster, but the chemistry between patriarch Herman Munster (Fred Gwynne) and his father-in-law Grandpa (Al Lewis).

The Munsters are a wacky group, with the men joined by vampire matriarch Lily (Yvonne De Carlo), son Eddie (Butch Patrick), and 'plain' (that is, attractive blonde) niece Marilyn (Pat Priest after the first thirteen episodes), and their appearance and obliviousness are frequently played for laughs. At its heart, though, it's a family sitcom with a headstrong husband, a wise-cracking elder, and a whole lot of misunderstandings based on recognizable situations...only they're all monsters. The best of it all is the scheming and bickering between Herman and Grandpa. Give me a half-hour of Herman and Grandpa arguing, and I'm happy.

Gwynne and Lewis, who worked together previously on Car 54, Where Are You, stand out in the effective cast. In later years, Gwynne was reluctant to revisit the series, likely due in part to the brutal makeup routine he endured, as well as his cumbersome and physically debilitating costume. He never gives anything less than his all on camera, though. Gwynne's distinctive laugh, lumbering movements, and vivid facial expressions are amusing even without the get-up. In quieter moments, his intonation while admonishing his son ('Now, Eddie'), often accompanied by a waving finger, reveal the character as a well-meaning but misguided father. His dejected whining when Lily won't give him his way indicates a selfish and childish husband.

Meanwhile, Lewis makes anything sound funny. Grandpa's accent is more New York than Transylvania, and his cigars and expressive mug round out a persona owing more to his old-school showbiz roots than to the classic Hollywood horror pictures.

Here is a list of recommended episodes for those new to the series or just looking for ideas for a Halloween marathon. I don't include anything that appears in a previous TV Time column or is likely to show up in another. As a general rule, I recommend any of the sports episodes; there's something about Herman swinging a baseball bat that cracks me up. He also dabbles in football, basketball, and even professional wrestling in the series' run. Also, anytime you see a plot summary begin with something like, 'Herman and Grandpa's scheme goes awry,' you can count on that episode. Come to think of it, 'Herman and Grandpa's scheme' is usually sufficient.

Follow That Munster: For such a devoted couple, Herman and Lily sure do have suspicious minds. Herman takes mail-order lessons to be a private eye, which is amusing enough when he swells with pride at receiving his 'official detective kit.' His sneaking around to practice 'shadowing people' makes Lily suspicious enough to hire an agency to follow him, and the same agency unwittingly hires the novice sleuth to follow himself.

He just can't tell Lily he's a detective because -- well, because the show would run about sixteen minutes, but Grandpa conceives a plan to fix everything. Considering it doesn't lead to a catastrophic explosion or random transformation, it's actually one of his better plans. Lewis shines in this episode as his character treats his son-in-law as both an imbecile and a co-conspirator.

Lily Munster, Girl Model: When Lily looks for a job Herman is first uncomfortable, then downright agitated when she finds work (via a flamboyant Roger C. Carmel) as a fashion model. Grandpa decides to help Herman make Lily jealous by turning him into an irresistible playboy.

Grandpa's pills turn his son-in-law into versions of Frank Sinatra, Richard Burton, and 'a Texas playboy.' Then, Grandpa turns himself into a gorgeous young female model so Herman can take him -- uh, her -- uh, him -- to a fashion show to snuggle in front of Lily. It's a riot, and there's a memorable gag involving Eddie at the end, but be forewarned: hearing Al Lewis' voice come out of guest actress Nina Shipman's mouth may scar you for life.

Hot Rod Herman: In addition to seeing Herman in full gear as he tries to make Eddie proud by winning a drag race, you get a good reminder of how the cast elevates the dialogue. Seeing Herman clad in leather for the race, Grandpa says, 'There he is, my son-in-law, the 150-year-old teenage punk,' which isn't that funny unless you hear Al Lewis say it. Later, after an exasperated Lily tells Herman agreeing to race is the worst thing he's done since he bought a mausoleum at the cemetery and they couldn't move in, the chagrined hubby says, 'How did I know it was a restricted community and they wouldn't take live people?'

Lily's Star Boarder: A classic Herman spotlight from the beginning as the family ignores his refusal to accept their taking in a boarder. When Chester takes a room at Mockingbird Lane, Herman is jealous because everyone likes him so much. A highlight is his attempt to spy on everyone; he fakes leaving for work by yelling, 'Here I go, leaving for work! I won't even be back till 6:00, so I won't be able to see what goes on around here all day! Even if somebody wanted to steal my wife away and alienate my whole family from me, I wouldn't know about it!'

Gwynne is in rare form, but unlike some episodes, all family members get at least a few lines. 'Lily's Star Boarder' is even a good showcase for the family's mysterious fire-breathing pet, Spot.

John Doe Munster: After having a safe dropped on his head -- we've all been there -- Herman loses his memory, and because she's told it would be dangerous to shock him with the whole truth of his identity, Lily adopts her husband. Herman, despite having already referred to her as a 'cute little cookie,' instantly starts acting like a 7- or 8-year-old. You know, instead of his usually acting like a 10- or 11-year-old.

The sight of Herman getting into petty spats with Eddie and complaining to his 'mommy' Lily that she favors Eddie because he's not adopted is bizarre enough. It gets weirder, though, when Grandpa attempts to cure the amnesia by making Herman jealous. He does this by turning himself into a 'Latin lover' archetype and flirting with Lily. Remember earlier when I called this a relatable family sitcom? I must admit this kind of dynamic never surfaced in the Cleaver household.

Will Success Spoil Herman Munster?: The short answer is yes. Herman messes around with a tape recorder Eddie borrows from a friend. Accompanying himself on an acoustic guitar, he whips out an impromptu ditty about how his bones connect, revealing his own origin ('I was assembled, and that's how Hermie-baby was born!'). Eddie's friend's father (Gary Owens) happens to be a disc jockey who discovers the tune and plays it on his show, making Herman an overnight sensation.

Not realizing the singer is Herman, Grandpa describes the sound as 'a werewolf with laryngitis,' but after listening to my kid's preferred radio stations in the car, it sounds fantastic to me. Unfortunately, our new star becomes insufferable; much like...virtually every musical front man ever. Grandpa and the family conspire to knock him down a peg before his ego becomes totally out of control (or, worse yet, he records a 'concept album'). Honestly, the main reason to watch this otherwise unexceptional episode is to see Herman singing, but isn't that enough?

Just Another Pretty Face: This one gets off to a great start as Herman ignores signs to keep out of Grandpa's downstairs lab and starts playing with the equipment, turning dials and laughing like a little kid. He creates an accident that 'disfigures' him by making him look like Fred Gwynne! Everyone's reaction to the 'stunning transformation' is great, but the real kicker comes after Grandpa finds Herman's original blueprint and attempts to change him back only to turn him into a woman.

In what is either the series' most offensive or its most progressive moment, Herman embraces his new identity, donning pearls and a handbag to leave for his new job as a cocktail waitress. After a pointed, 'Good night to everyone...except Grandpa,' he walks out into a rainstorm. 'Just what I need,' he groans, 'right after I set my hair.' I think it's safe to say if you don't find this funny, The Munsters may not be for you. I also think it's safe to say I feel a little guilty for laughing as much as I did.

A House Divided: 'A House Divided' is perhaps the ultimate Grandpa/Herman episode because their bickering culminates in the old vampire trying to throw his son-in-law out of the house. When Herman claims ownership, Grandpa points out he was the one who made the down payment. So, of course, they literally divide the house in two.

Do they lay claim to certain rooms and declare them off limits to each other? Nope. Herman paints a white line throughout the entire premises, meaning he and Grandpa sit in the living room on opposite sides of a thick stripe, arguing over whose side has the newspaper. When Grandpa turns on the TV, he angles it out of Herman's sight, who retaliates by playing the organ at a raucous volume.

I wish I could say this episode is a metaphor for the growing generational conflict that enveloped suburban America in the 1960s, but it's really just a great demonstration of how juvenile the show's two best characters are. Let's be honest; if Universal made a Dracula vs. Frankenstein with Bela Lugosi and Boris Karloff engaging in passive-aggressive feuding on opposite sides of a castle, it would rank as one of the best horror movies the studio ever did.

It's hard to find a definitive answer as to why the series lasted only two seasons on CBS. Some in the cast were ready to move on, the show was expensive to produce, the ratings had declined in season two or perhaps it's a combination of all of these factors. In just two seasons, though, The Munsters left a lasting impression on pop culture. It never won an Emmy (though Jack Marshall's groovy theme song got a Grammy nomination), it was not a ratings smash, and it has never been a critical favorite, but fifty years later it holds up as a silly but often hilarious comic fantasy, one carried by the indelible performances of Gwynne and Lewis.