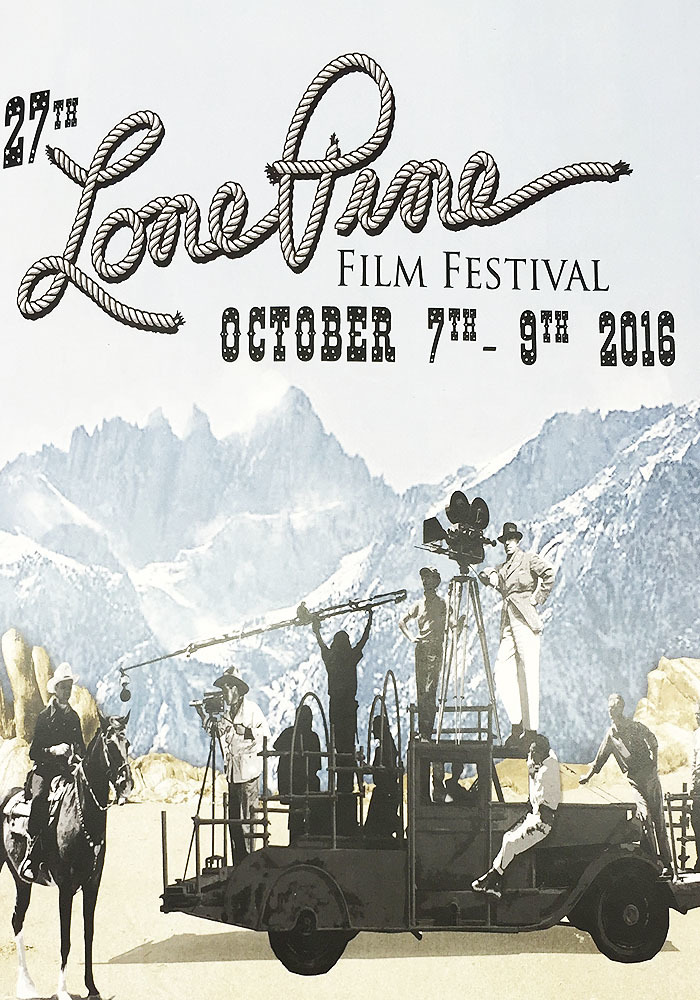 A Visit to the 2016 Lone Pine Festival

The 27th Lone Pine Film Festival took place Columbus Day weekend in Lone Pine, California, where hundreds of Western movies and TV shows have been filmed over the course of nearly a century.

This was the third consecutive year I've attended the fest, and it was just as enjoyable as the previous two. Each Lone Pine Festival includes movie screenings, location tours, panel discussions, and book signings. This year even featured a stunt demonstration in the famed Alabama Hills!

The Lone Pine Film Festival might be the only event where guests can watch a movie, hop on a bus and stand where the movie was made just a few minutes later! I enjoyed two such tours this year: one for the Wayne Morris 'B' Western Desert Pursuit (1952) and the Hopalong Cassidy film Mystery Man (1944).

Something new at the fest this year was the presence of Turner Classic Movies host Ben Mankiewicz, who participated in panel discussions on Friday and Saturday. Perhaps the participation of a TCM host will help make more film fans aware of Lone Pine and help draw future visitors.

Lone Pine is such a special event -- where else could a guest such as myself enjoy sunrise over the mountains while chatting with one-time child actor Billy King, who appeared in four Hopalong Cassidy films? Billy is now about 90 and as charming a gentleman as one could ask. After his brief movie career he eventually spent years teaching at UC Davis.

The festival kicked off with an opening night gala. Unlike the last couple of years, when the gala was held inside Lone Pine's Museum of Film History, this year's buffet dinner was served in the museum parking lot, which was quite pleasant, with tables making the meal easier to manage, plus ample space for meeting and greeting fellow attendees.

At the gala we said hello to William Wellman Jr., Wyatt McCrea (grandson of Joel McCrea and Frances Dee), and stuntwoman Sylvia Durando, whose work includes doubling Nancy Gates in Comanche Station (1960). The buffet also provides a wonderful opportunity to chat with fellow classic film fans; after all, there are few places in 'real life' where one can discuss topics such as Tim Holt! (Incidentally, there's a Tim Holt Street in Lone Pine!)

We also spent time that evening touring the Museum of Film History, where we admired the beautiful restored RKO camera car which recently went on display.

We were up early each day for the first screening at 7:30 a.m. It was fairly easy to do, since attending a screening entailed simply walking a block or so from our hotel to the Lone Pine High School auditorium.

On Friday was the aforementioned Desert Pursuit, shot almost entirely outdoors in the Alabama Hills. Our tour guide again this year was Don Kelsen, who does a terrific job piecing together the various film spots. He invests quite a bit of time, making research trips to Lone Pine earlier in the year to hunt down locations.

During the tour Don mentioned how crews would leave bits of sets behind as they hastily tore them down and packed up. In fact, during our tour we found a very old, rusted nail at the site where a small altar had been constructed for a film.

The day continued with the excellent Stranger at My Door (1956). Stranger at My Door was a favorite film for director William Witney, whose son Jay was in attendance. It's an interesting film about a minister (Macdonald Carey) who tries to reform a bank robber (Skip Homeier); not realizing his wife (Patricia Medina) is fighting an attraction to the bad man. After the movie the audience was shown a brief video of director Witney discussing the filming of a very impressive scene featuring a wild horse.

There are many options at the event, as illustrated by the fact that while I watched the rarely seen Universal film Trail of the Vigilantes (1940), a delightful spoof starring Franchot Tone, my husband attended a discussion with Wyatt McCrea and historian Ed Hulse about Frances Dee. Hulse has a new book out on the actress which features many interesting family photos.

That evening there was a screening of John Ford's 3 Bad Men (1926), starring George O'Brien, accompanied by live piano music. After the screening, Hulse interviewed Mankiewicz, Wellman, and John Ford's grandson Dan about growing up in filmmaking families. I especially enjoyed Hulse's anecdotes about getting to know George O'Brien towards the end of O'Brien's life, saying that he was 'one of the nicest guys you could ever meet.'

Saturday morning's early movie was the Hopalong Cassidy film Mystery Man (1944), followed by another tour of the Alabama Hills led by Don Kelsen. Hoppy expert John Gilliland also came along in his custom-made Hopalong Cassidy costume and gladly posed for photos at various locations. (We plan to meet Kelsen at Iverson Ranch here in Southern California later this month and see where the rest of Mystery Man was filmed!)

One of my favorite films of the festival was the silent film The Prairie Pirate (1925) with Harry Carey Sr., accompanied by excellent, evocative live piano music. I'd never seen Carey Sr. in a leading role before, and the film was a treat for me.

I also enjoyed a 'Growing Up in Hollywood' panel with McCrea, Cheryl Rogers Barnett (daughter of Roy Rogers), Petrine Mitchum (daughter of Robert), and Melinda Carey (daughter of Harry Carey Jr. and granddaughter of Harry Carey Sr., Olive Carey, and Paul Fix). I particularly enjoyed Melinda relating how close her father and frequent costar Ben Johnson were, having 'grown up together' making movies. Barnett added that when she was very young Carey and Johnson occasionally looked after her on movie sets, saying, 'They were fine young men.'

That evening I saw John Ford's 3 Godfathers (1948) for the first time, starring John Wayne, Harry Carey Jr., and Pedro Armendariz. Afterwards Mankiewicz hosted a discussion with Wellman, Ford, and Rob Word. Among other topics they discussed Ford's notoriously poor treatment of actors, including Carey on 3 Godfathers, and whether the ends justified the means.

Sunday morning there was time for one movie before we had to get on the road: Rawhide (1951), starring Tyrone Power and Susan Hayward. I hadn't seen it for several years and on a fresh look I was especially impressed by the supporting cast. Although we didn't have time for the tour of locations, including Rawhide's, as it happens we had found the stagecoach depot location on our own a few years ago.

After the movie we stopped for breakfast at our favorite restaurant in town, the Alabama Hills Cafe, where we noticed Mankiewicz and his family also enjoying breakfast at a corner table. It's that kind of intimate festival, where guests and panelists spend the weekend together enjoying the many things Lone Pine has to offer.

My festival tally this year was eight films, two tours, a panel discussion, three book purchases, and considerable time socializing with fellow film fans and exploring the museum. There was so much to do at the festival I could have mapped out a completely different schedule and still been happy; my husband even found time to visit a rodeo!

I continue to recommend the Lone Pine Film Festival for all classic film fans. See you there in 2017!