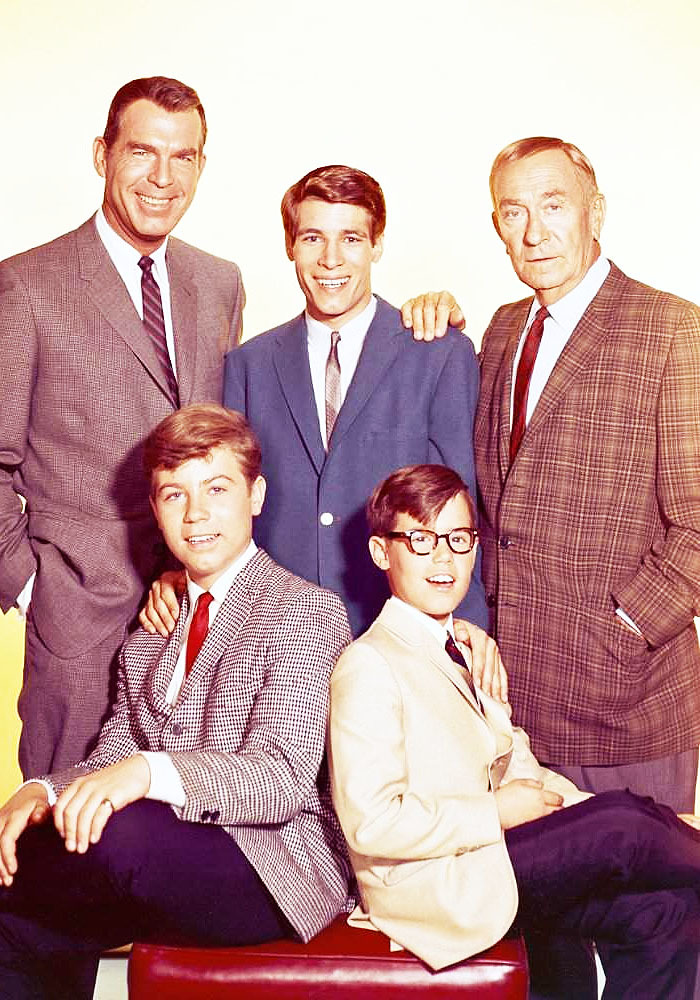 The 'Special Thanksgiving Episode' is not nearly as established as the 'Special Christmas Episode,' but plenty of classic shows commemorated the November holiday once. Let's take a look at a sampling of television you can enjoy when you need a break from all the tackling and mayhem...or if you don't hit any of the department store sales.

My Three Sons, 'Chip's Harvest': Thanksgiving is about food more than family and football. It doesn't take much for Americans to come up with an excuse for a feast ('Why are you getting out the good china, Mom?' 'They just announced another Jurassic Park sequel, so your father got steaks and invited the Robinsons!').

In the Douglas residence, Robbie is drooling at the sight and smell of the fowl Bub is preparing. If you're into turkey, hey, I have no problem with that, but why does it have to be such a rare delicacy? Steve Douglas is a successful engineer with no money issues. If this entree is such a big deal, why have it just once a year? You go to the store, pick out a turkey, find some side dishes, come home, and spend a few hours cooking it, and I'm sure if you just ask Bub & Ah, never mind. I think I just figured out why turkey is such a rare delicacy in the Douglas residence.

Thanksgiving is also about fellowship, and Steve tells the kids they can invite their favorite friends for the feast. While his older brothers ask a teacher and a girlfriend (that's two separate ladies, mind you -- this is My Three Sons, not Peyton Place), Chip announces he wants to bring John Squanto, who he describes as a real Indian chief.

Since John Squanto lives alone and does odd jobs, or, as Mike less artfully puts it, is 'a dirty old bum,' this causes some spirited discussion at the dining room table. The boys bicker about inviting a guy who sleeps in a shack by the county dump to share their holiday. Even Bub joins in, criticizing 'the old coot' for telling Chip he's 'a real Indian.' A cheerful Steve breaks the tension by saying, 'You know, I don't think I've ever had Thanksgiving with a dirty, lying old bum.' If only this household didn't consist of two widowers and three young boys, which would be an ideal setup for a mother-in-law joke.

Steve heads to the shack to 'uninvite' the mute Squanto, but seeing what it means to the guy, he tells him to be at the house at 1:00. It's a good thing, too, because when they have an electrical problem Thanksgiving morning, the resourceful Native American fixes a makeshift outdoor grill with rocks, dry grass, a stick, and an open flame.

When John disappears, Bub says, 'He must have lost his nerve when it came to eating his own cooking,' but Chip says he left because Mike and Robbie mocked him. In fact, Squanto returns in full tribal regalia, no longer mute and chatty enough to slow down the entire episode with a speech about the first Thanksgiving. The romantic in me likes to think Bub didn't learn any lesson at all and actually makes snide comments about Squanto as soon as dinner's over.

That Girl, 'Thanksgiving Comes But Once a Year, Hopefully': Fifty years later much has changed in this world, but this holiday still comes but once a year. (However, if the 'early bird' shopping events are any indication, it starts earlier and earlier all the time.)

Ann's beloved Donald is going over Thanksgiving plans with his parents. After some back and forth, they suggest he bring Ann to St. Louis to spend it with them. The fact that Mother Hollinger doesn't want that to happen is irrelevant. What's notable is how wide-eyed Don reacts: 'That's not a bad idea.' It's like he never even considered bringing her home to meet the folks.

Granted, the Gateway to the West is some distance from the Big Apple, but it's 1967, not 1867. It's not he has to buy a Conestoga wagon and take a few months off from work for the journey. No, Donald's apparent lack of commitment should be a warning sign to our dear That Girl. He's already had forty episodes to think about this stuff! His mother sees the willingness to bring a girl out there as proof he's going to propose to her, but we know better. When Mrs. Hollinger refers to Ann as a 'perfectly strange girl,' Don replies he can't completely disagree. There's a ringing endorsement!

Rather than risk making either set of parents unhappy, Ann and Don decide to invite everyone to her apartment, thus ensuring everyone is unhappy. First, the Hollingers send supplies, including monogrammed candlesticks that make Ann's parents envision her becoming 'Ann Hollinger.' Mr. Marie grumbles, 'Whose ridiculous idea was it, anyway, to change the girl's name when she gets married?' Yeah, too bad he doesn't have a sturdy, masculine surname like 'MARIE.'

The holiday is nearly disrupted when Ann opens spices Donald's parents sent for the meal and an overzealous letter carrier thinks it's some kind of illegal substance. 'You're under arrest,' he barks. You know, if mailmen really have that kind of authority, I may have to rethink my policy on the absurdity of leaving them Christmas bonuses.

Anyway, the Hollingers and the Maries engage in tense banter, with the men folk quickly trying to one-up each other about their military service. Mr. Hollinger was in the infantry doing the real work, he indicates, unlike flyboys like Mr. Marie. Ah, but Ann's dad gets the last word, proving his bona fides with a proud, 'I had dysentery.' That's not a phrase you want to hear on Thanksgiving.

Speaking of Ann's cooking, she botches the big meal, mixing up the oyster stuffing for the goose with the turkey. All of that sounds unappealing, but I'd eat both birds if they had those fancy deep fryers back in 1967. It's not all Ann's fault, though; she tries to please two families with separate traditions, she runs back and forth between two kitchens, and the birds are ruined when she loses the keys to the Baumans' apartment. Wait that pretty much IS her fault. Oh, well.

Beverly Hillbillies, 'Elly's First Date': I have two confessions, and I hope you will be gentle with me since it's the holiday season. First, I had no recollection of this episode; second, I now consider it a massive disappointment in one big regard. The one thing I expect from a Hillbillies Thanksgiving scenario is someone who is NOT kin to the Clampetts sitting down at the table, lifting the cover off a silver platter, and finding a possum or a raccoon.

Don't fall victim to the same false expectation, friends. As the title implies, the holiday and its trappings are just background for the main storyline of Elly getting fixed up with Mr. Drysdale's stepson Sonny, played by a hilarious Louis Nye. Sonny is so vain, self-centered, and obnoxious he makes Chatsworth Osborne look like Donna Stone. Nye's outstanding performance is a keeper, and Elly's discussion with Jed about the birds and the bees ('I know all about the little critters!' 'That's what I figured, you being raised in the woods and all.') also makes this a worthwhile installment. 'Tis the season for Thanksgiving, though, so let's focus on that.

Jed is proud of the 'pot passers' he's found, which happen to be pool cues, and the Clampetts are impressed by the big table they plan to use for their feast -- a pool table. As they prepare for the special occasion, they learn about grocery shopping, create awkward moments for the Drysdales, and end up with a respectable-looking spread. It's a solid outing for fans of the show with enough holiday cheer to make this a worthy entry in the pantheon of Thanksgiving episodes. But, oh, how I wanted to see at least one of the Drysdales eat a possum.

Hazel, 'Everybody's Thankful but Us Turkeys': In the midst of preparing dinner, Hazel gets a long-distance call from her sister, who describes the Thanksgiving Day scene back home. Afterwards, a homesick Hazel sniffles but tells Harold she got something in her eye. As if someone with her housekeeping skills leaves any dust in the kitchen!

It's soon time for George's relatives to come over for a holiday gathering at the Baxter joint. George's mother, his sister Phyllis, her husband Bob, and Bob's blowhard brother all arrive for some of Hazel's famous cooking.

Hazel sizes up Mother Baxter in a matter of seconds, noting, 'Nothing's sadder than an unemployed mother.' She feigns frustration at having to cook for all the guests by herself, threatening to quit immediately until George's mom offers to help. Here's an example of what I like about Hazel: Not only do you and I know this is a complete sham, but George sees through it right away and congratulates Hazel on her clever ruse. Hazel establishes the savvy nature of its main character without making her foil look like a complete idiot. No, it's the rest of the family who look like complete idiots.

I don't want to mock the Baxters, especially not when Phyllis and Bob have severe marital problems. They squabble as soon as they arrive -- he makes jabs at her cooking, she throws haymakers at his...card tricks. I'm sure it's a symptom of a larger problem in the relationship, but all we hear is how sick and tired Phyllis is of the card tricks. Everyone else delights in them, but this marriage is itself a house of cards because of Bob's little icebreaker. I guess she wants him to find a respectable parlor hobby, like tying balloon animals, miming, or that old standby, getting hammered on Scotch.

You know who sees the truth about this troubled marriage and the solution? That's right, our second-favorite domestic engineer (Bub is still number one). After mere minutes in the kitchen, Hazel maneuvers Mother Baxter into giving cooking lessons to her inept daughter, giving Mom a role and Phyllis a way to stop her hubby's cruel remarks about burning the roasts. Plus she reminds the gals of George's dad and how he used to tell the same jokes over and over again. Mother Baxter can't even guess how many times she heard the one about the Billy goat and the tin can. 'You always laughed,' Phyllis gasps. 'I loved him,' is the reply.

That's the key to a good relationship: Indulge a guy and make him feel he's entertaining even if he's using the same tired material year after year (Readers, please keep this in mind when reading all my Honeymooners references in TV Time). Phyllis takes a rain check on the cooking lessons because she has to go back out in the living room and do the unthinkable...pretend to enjoy those infernal card tricks!

Hazel Burke is the greatest magician of all. She makes everyone's problems disappear! This episode has a great conclusion where George says she forgot one place setting. A confused Hazel is one step behind for a change, and it's a moment of genuine sweetness and emotion when Mr. B gives his maid a chair and invites her to join them. In fact, just thinking about it gives me a little dust in my eye. Really, though, I might just be sad we never get to see any of those card tricks.