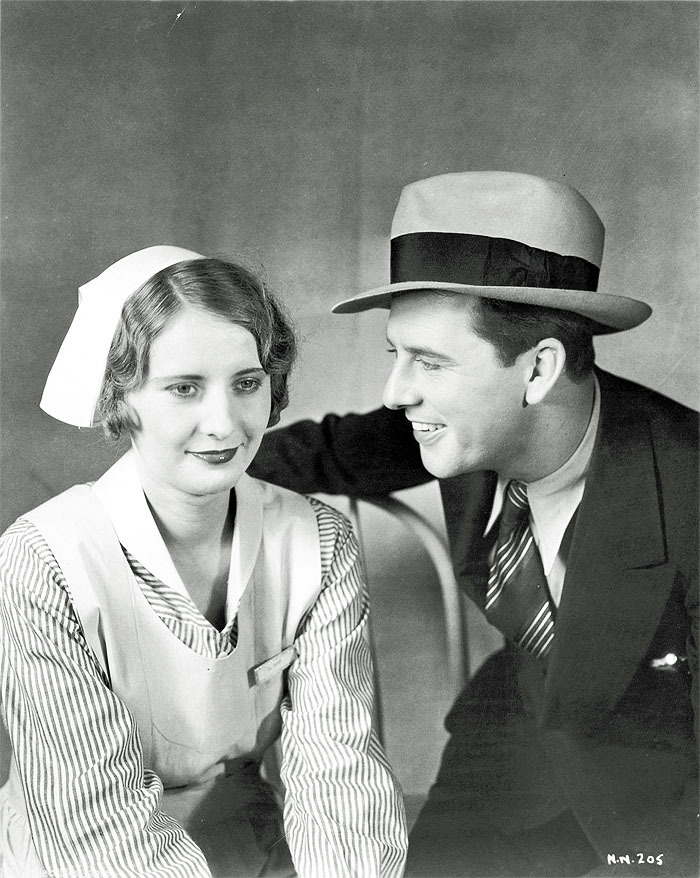 In my ongoing look at the less-than-stellar fellas populating the pre-Code world, I'm shining the spotlight today on Warner's 1931 film Night Nurse. The film stars the always-fabulous Barbara Stanwyck as the title caregiver, Laura Hart, who finds herself battling a variety of contemptible characters in her quest to save the lives of two young girls in her charge. There are a number of do-gooders in this, including Laura's pal and fellow nurse Maloney (Joan Blondell) and Dr. Bell (Charles Winninger), chief of staff of the hospital where Laura receives her training. But there's also a quartet of not-so-upstanding citizens -- two doctors, a chauffeur, and a bootlegger -- and it's these flawed gents who are the focus of today's post.

In one scene, this hospital intern is referred to as a 'baby frightener.' It's a rib-tickling visual that's not far from the truth -- Eagan's sole purpose in life appears to be centered on serving as a constant annoyance to those around him. He's rarely seen extending gentle treatment to patients or perfecting his bedside manner; instead, he spends his time engaged in such acts as grumbling when he's required to give a hand to a passed-out gunshot victim (he'd rather read a magazine), offering inappropriate remarks to the females on the staff, and spooking the nurses by hiding full-size skeletons in their beds. It's no wonder that, shortly after Laura's first encounter with Eagan, Maloney warns her, 'Take my advice and keep away from interns. They're like cancer. The disease is known, but not the cure.'

Shortly after receiving her assignment to serve as night nurse to young sisters Desney and Nanny Ritchey, Laura makes three key discoveries. First, their mother (Charlotte Merriam) spends more time drunk than she does caring for her daughters. Second, the little girls are being systematically starved to death. And third, the family chauffeur, Nick, is not a nice guy. When Laura first meets Nick, he appears to be a knight in shining armor -- as she's struggling to fight off the drunken advances of a partygoer at the Ritchey house, Nick steps in and knocks the guy cold with a one-two punch.

But Laura barely finishes expressing her gratitude before Nick manhandles her as well, curtly ordering her around and preventing her from making a phone call by socking her on the jaw. Before long, it becomes clear Nick is not only 'driving Mrs. Ritchey,' but he also plans to marry the constantly inebriated matriarch -- for reasons that are far more sinister than they first appear.

As it turns out, the family physician, Dr. Milton Ranger, is the dastardly puppeteer pulling the strings in an effort to hasten the demise of the Ritchey girls and, with Nick, gain control of their trust fund. Ranger, whose facial tics and nose twitches indicate he's on some drug, verbally attacks Laura when she appeals to him for help with the girls. 'Mind your own business,' he tells her, insisting there is no cause for alarm regarding the children's health. 'You talk too much. You've picked up a lot of half-baked medical knowledge around the hospital. All nurses do. But I wouldn't air it quite so freely, or you'll talk yourself right out of your profession in short order.'

Mortie is sort of an 'honorable mention' in this parade of imperfect lads. Laura is introduced to him when he staggers into the hospital, the victim of a gunshot wound. When she bends the rules by recording the injury as a routine cut, Mortie proves he's the kind of guy who doesn't forget a favor -- no matter what he needs to do to repay it. A bootlegger by trade, Mortie first comes to Laura's aid when he shows up at the Ritchey house to deliver an order of booze. When he learns Laura is desperately trying to revive one of the girls by bathing her in a tub of milk, he volunteers his services and burglarizes a local delicatessen to snag the much-needed dairy product.

And later, after Nick physically assaults not only Laura, but the family housekeeper and Dr. Bell, too, Mortie pops up in the nick of time (no pun intended) to save the day. He makes it clear that he's carrying a gun, forcing Nick to exit the premises, never to be seen again. Mortie's specific role in Nick's permanent departure is never quite spelled out, but it's clear he was a chief contributor, if you know what I mean. (It was for a good cause!)

That's the flawed foursome of fellas who make their home in the world of Night Nurse. Directed by William Wellman, it's one of my favorites from the pre-Code era, and these no-good gents certainly add to its appeal. If you've never seen it, check it out -- you're in for a real treat.