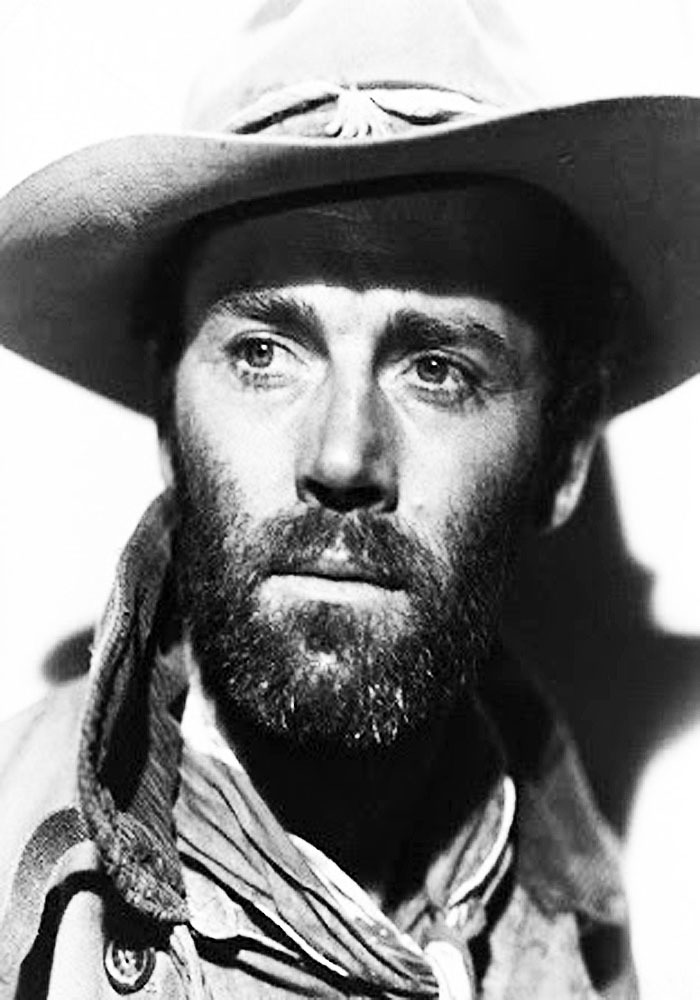 The Old Corral: Hank - The Westerns of Henry Fonda

That rangy walk, those steely blue eyes, that quiet drawl: Henry Fonda was ideally suited to Westerns. Born in the prairie city of Grand Island, Nebraska, in 1905, those roots equipped him to star in future Western movies. Whether as Frank James, Wyatt Earp or any number of other Western characters, Fonda became one of the most memorable Western leads of all.

Fonda's early Western career was tied to that of John Ford. Though Fonda started acting in movies in 1935, Westerns -- or at least adult 'A' picture westerns - were not common. It was not until 1939 that the genre staged a comeback when Ford directed Stagecoach for United Artists, and suddenly all the big studios wanted Westerns. Universal released Destry Rides Again, with Fonda's great pal James Stewart, Warners had Errol Flynn cleaning up Dodge City, Paramount had Joel McCrea nation building in Union Pacific -- and Fox cast Tyrone Power as Jesse James. When they needed brother Frank, they chose Henry Fonda.

Fonda was not an obvious choice. The New York Times called him 'the most likable of the new crop of romantic juveniles.' He had never been in a (true) Western movie, but he had been in a stage production of The Virginian in 1937, a play I for one would love to have seen - he starred as the Virginian with Dan Duryea. Fonda was Young Mr. Lincoln for John Ford in 1939 and also starred in Ford's early frontier tale Drums Along the Mohawk that year.

Ford saw Fonda's potential. Henry was to be Tom Joad in Ford's The Grapes of Wrath in 1940 and, now in true Western mode, Ford later used Fonda as town-taming marshal Earp in My Darling Clementine (1946) and as martinet Colonel Thursday in Fort Apache (1948). But Fonda's Frank James put him on the Western map. So much so Fox decided on a sequel in 1940; Fritz Lang directed The Return of Frank James -- in some ways a superior picture. In both, Fonda's Frank James is far from the historical reality; he is a noble figure with a deep fund of decency. Fonda was superb in the part. You might say he specialized in playing ordinary decent Americans.

In all of these Westerns Henry Fonda projected authority, toughness -- and no little charm.

Fonda's next involvement with the Western came in 1941 when he acted as (uncredited) technical advisor on the set of Fritz Lang's follow-up oater, Western Union. But it was 1943 that saw him lead in a truly fine Western film: The Ox-Bow Incident. Fonda was fourteen years old when he observed a lynching, watching a mob from the second floor window of his father's print shop. 'It was the most horrendous sight I'd ever seen...We locked the plant, went downstairs, and drove home in silence. My hands were wet and there were tears in my eyes. All I could think of was that young black man dangling at the end of a rope.'

Fonda made several films condemning the evil of lynching and questioning capital punishment in general; few are as grim and dark as The Ox-Bow Incident, which Fonda and director William Wellman nagged Darryl Zanuck into making. Zanuck agreed to the non-commercial vehicle only if Wellman and Fonda signed up for more audience-friendly movies. As Zanuck predicted, it did little at the box office in the darkest hours of the second World War when Westerns were popular, but only if they contained color, shooting and scenery. But it became one of the best 'serious' Westerns in the history of the genre and is still to be admired.

After three years in the Navy ('I don't want to be in a fake war in a studio') his next two Westerns were Ford ones. Once again his Wyatt Earp in My Darling Clementine is a far cry from historical reality (despite Ford's absurd claims to authenticity), but if we expect factual accuracy from Hollywood Westerns we are really missing the point. It's a majestic performance by Fonda; making him perhaps the greatest ever screen Earp. And his rigid Easterner Col. Thursday in Fort Apache, opposite John Wayne's free spirit Captain York, is another perfectly splendid role. Fonda was now one of the greatest of Western actors.

More than a decade passed before Fonda climbed into the saddle again. He was first and foremost, in his own thinking, a stage actor and he spent much of the '50s on the boards. The early and mid-1950s, that heyday of the Western movie, passed Fonda by. He would be a celluloid Russian aristocrat or an obstinate juror but he wouldn't don a Stetson again until 1957, when he appeared as a bounty hunter in Paramount's The Tin Star, directed by Anthony Mann (Fonda sure worked for some of the great directors). Fonda? A bounty hunter? Surely not! But never fear, like most Hollywood bounty hunters of the period, Fonda's is a goodie, deep down. He becomes the mentor of young sheriff Anthony Perkins, falls for widow Betsy Palmer and forms a family with her and her young son, going off to a new life in California together.

In 1959 Fonda's agents persuaded him to do a TV series, The Deputy. NBC accepted the idea that Fonda would be the narrator-host, with occasional appearances as star. He is Chief Marshal Simon Fry in Arizona in the 1880s, with Allen Case in the title role. Case's character allowed Fonda to travel and do other work. In fact Fonda featured as lead in only six of the thirty-nine episodes. The series did well enough to be renewed for a second season.

Back on the big screen and at Fox in '59, Fonda flirted more with being a baddie in the Edward Dmytryk-directed Warlock. He is a clean-up-the-town marshal once more but this time only a semi-official one, a man of dubious reputation hired to shoot to kill, and, with close friend Anthony Quinn, a saloon owner. But it's Fonda, so in the end he does the decent thing. Still, The Tin Star and Warlock suggest a hint of a new Fonda, with tinges of bad-guy here and there.

As the '60s dawned Fonda was beguiled into appearing in MGM's lumbering (but commercially successful) How the West Was Won. It is a pretty bad film and all the big stars in it have little more than cameo parts. At least Fonda's crusty old buffalo hunter is more convincing than his pal Jimmy Stewart's frankly ridiculous mountain man. John Ford was one of the (three) directors, so perhaps that's what enticed Fonda.

How the West Was Won was one of six Westerns Fonda made in the 1960s, a time when the true glory of the genre had somewhat departed. Still, there were some delights in store. The Rounders in 1965 is a charming light Western written and directed by Burt Kennedy, starring Fonda alongside that excellent Western actor Glenn Ford. It has a bawdy side but also a slight tinge of melancholy. Warners' A Big Hand for the Little Lady is a poker drama with Fonda and Joanne as super-skilled con artists. That was followed the year after by Welcome to Hard Times, another Burt Kennedy effort which was an interesting flop. Kennedy wanted gritty reality and Fonda gave him that. He plays a townsman reluctant to face up to a gunman and accused of cowardice. The picture was probably too hard (and too slow) for its own good but Fonda is fine in it.

In 1966 Fonda got back together with his old friend James Stewart in a not-great but still gripping Western, Firecreek. Stewart is an amateur marshal and Fonda leads a band of desperadoes into the town. Once again Fonda is on the wrong side of the law. But he is a baddie with saving graces. Vincent McEveety was no John Ford and the picture has a slight 'B' feel to it but Fonda is brilliant. In 1970 Stewart and Fonda teamed up again (for the last time) in another light-hearted Western, The Cheyenne Social Club, directed, rather surprisingly, by Gene Kelly.

Between Firecreek and The Cheyenne Social Club came the biggest shock for Fonda fans when in Sergio Leone's Once Upon a Time in the West (1968) a bandit shoots a small boy dead, in cold blood. The camera pans round and who should the killer be but Henry Fonda! Those steely blue eyes were now put to another purpose. As railroad henchman Frank, Fonda is scary, and one of the baddest badmen you will see.

Henry Fonda had a fine talent as an actor and he brought a subtlety and nuance to Western lead roles that are quite rare. Only Wayne in his better efforts (Hondo or Red River; The Searchers, of course) or Gregory Peck in The Gunfighter or The Bravados, or Gary Cooper in High Noon, Clint Eastwood in Unforgiven, matched his ability. Henry Fonda is one of the top five Western leads.