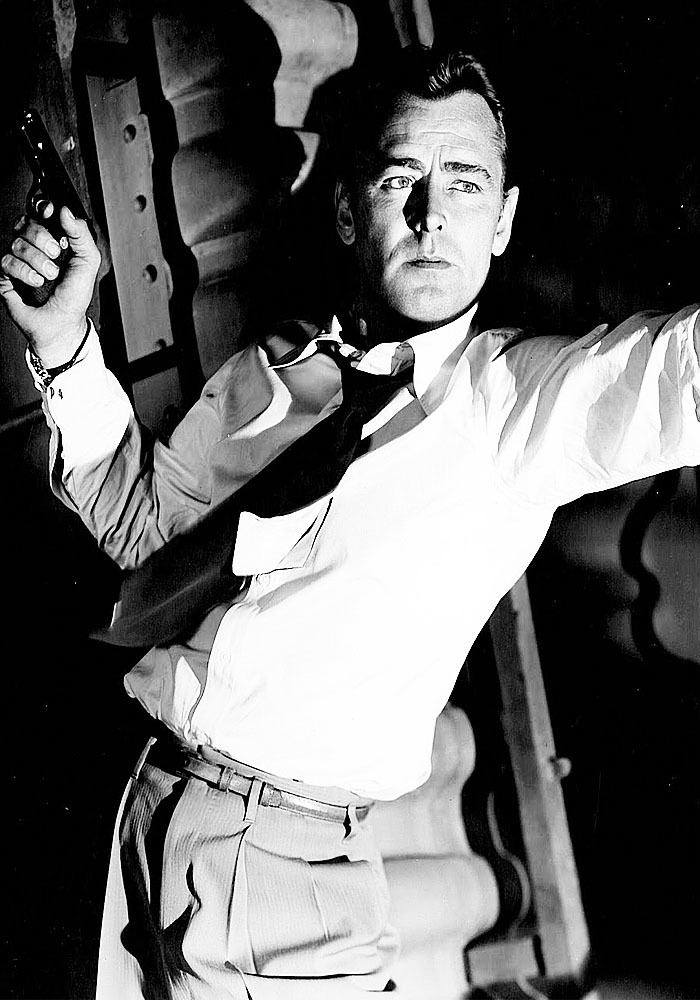 Creating an absolute definition of film noir is an elusive task; I've found over the years that a simplistic but revealing description of the era can be found in some of the frequently repeated words in the titles of the films themselves, some of which include 'fear,' 'night,' 'kill,' 'street,' 'big,' and 'danger.'

Today, I'm taking a look at three 'danger' noir films from the classic era. Each one is worth checking out (or checking out again)!

Watching the beginning of this Alan Ladd starrer for the first time, you wouldn't think it has much promise. As the camera shows us the inside of a cavernous post office, the narrator extols the virtue of the postal service: 'The citizens of this country own it, work in it, and use it. All day, every day, all year. Use it for business. For pleasure. Sometimes for an all-important message to that busy man at the North Pole.' Oh, brother. Don't fret; it gets better.

Ladd plays Al Goddard, a U.S. postal inspector characterized by his hard-hearted demeanor outside of the office: 'You've been chasing hoodlums for so long, you don't know how to treat ordinary people,' his boss opines. 'You don't like anybody, you don't believe anybody, you don't trust anybody.' After a colleague is found murdered, Goddard is tapped to investigate the crime, aided by a nun (Phyllis Calvert) who can identify the killers. In order to nab the men responsible, Goddard goes undercover to infiltrate a local gang headed by Earl Boettiger (Paul Stewart), but he runs into a snag when the nun is kidnapped by the gang and blows his cover.

One of the members of the gang is Joe Regas, played by Jack Webb in the biggest role of his film noir career. He's the film's nastiest character, unflinchingly carrying out his evil deeds with callous efficiency. In one scene, Joe's partner, George, touchingly shares that his ex-wife left him years earlier, taking with her their son. His only keepsake is a bronzed pair of the boy's baby shoes. A few minutes later, Joe picks up one of the shoes and beats George to death with it.

Dick Powell stars as Rocky Mulloy (how's that for a noirish name?) who, at the start of the action, has just been released from prison after serving five years of a life sentence for a murder/robbery he did not commit. He's got one thing on his mind -- securing the release of his pal, Danny Morgan, who's still in prison, falsely accused of the same crime. Matters are complicated when, against his better judgment, he finds himself growing closer to Danny's wife (Rhonda Fleming).

Delong (Richard Erdman) is an ex-Marine whose alibi leads to Rocky's early release from prison. Disabled during the war (or, as he puts it, 'I lost a leg somewhere'), Delong's most prominent characteristic is his affinity for alcohol. “Occasionally I always drink too much,” he admits. Delong is a wisecracker from way back -- he's always prepared to serve up a quick quip. There's the time, for instance, when he tells Rocky about his date with Darlene (Jean Porter), a bubbly part-time model who turned out to be a 'full-time pickpocket.' When Darlene tried to steal his money, Delong explains, he slapped her wrists. 'The bartender didn't like that. I let him have it over the head with a peanut machine. He's resting now,' Delong says matter-of-factly. 'In the emergency hospital.'

Jean Porter was married to director Edward Dmytryk, one of the Hollywood Ten -- the well-known group of blacklisted writers and directors during the McCarthy era. The two married in 1948 and remained together until Dmytryk's death in 1999.

One of my favorite guilty cinematic pleasures is Where Danger Lives. Robert Mitchum stars as Jeff Cameron, a compassionate doctor who becomes involved with a mysterious woman by the name of Margo Lannington (Faith Domergue) after she's brought to his hospital following a suicide attempt. Jeff finds himself falling for her before long, but he discovers Margo isn't all she appears to be.

I call Where Danger Lives a guilty pleasure because it's not exactly Shakespeare, if you know what I mean. No disrespect, but Faith Domergue is no threat to Bette Davis, if you get my drift. Still, there's something about this over-the-top tale that's like a car wreck -- you can't turn away!

Hands-down it's Frederick, Margo's hubby, played by the incomparable Claude Rains. He's in only one scene, but his snide commentary and snarky asides are enough to tide you over till the final reel. When Jeff first meets him, he thinks Frederick is Margo's father. After Jeff refers to him numerous times in this manner, Frederick finally sets him straight. 'I wish you'd stop calling her my daughter. She happens to be my wife,' he dryly remarks. 'Margo married me for my money. I married her for her youth. We both got what we wanted. After a fashion.'

Where Danger Lives was directed by John Farrow -- Mia's father. Farrow's wife -- actress Maureen O'Sullivan -- has a small part in the film.