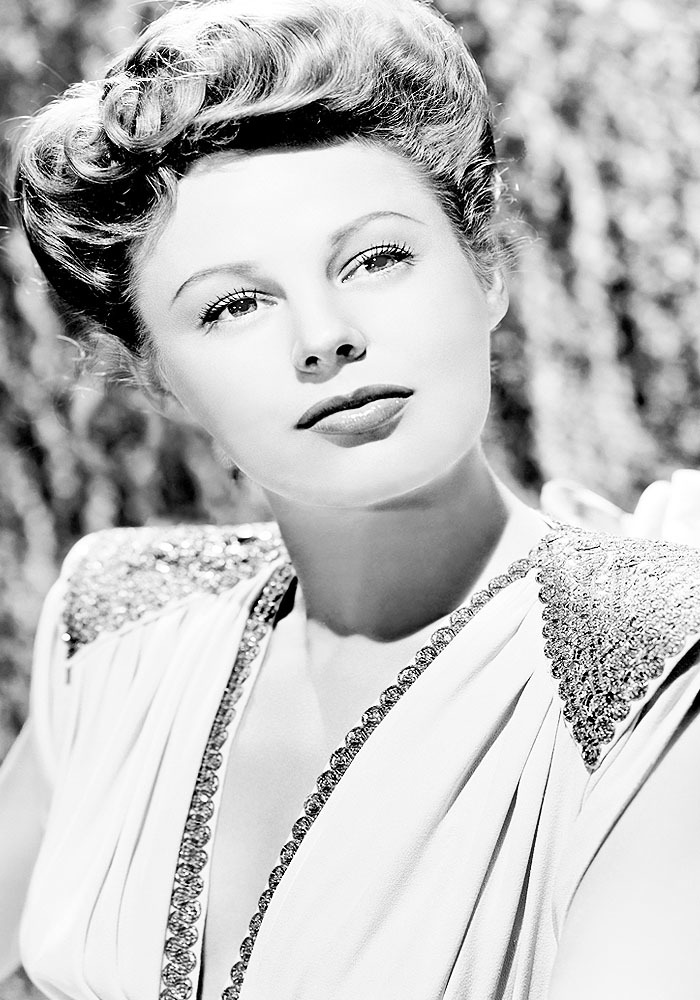 The delightful June Allyson was born in the Bronx, New York, on October 7, 1917. She overcame a hardscrabble childhood and a years-long recovery from a freak injury to emerge as a sunny and cheerful star at MGM.

June was raised by a single mother after her father walked out. At the age of eight she was crushed after a tree limb fell on her when she was riding a bike; she spent years in a brace but eventually recovered and learned to dance. She appeared in a series of musical shorts in the late '30s and worked in the chorus in various Broadway musicals.

Her first break arrived when Betty Hutton came down with the measles and understudy June went on in her stead. Director George Abbott saw her and cast her in Best Foot Forward. When MGM bought the rights to the show June came to Hollywood to appear in the 1943 film version. She was featured with Gloria DeHaven, Nancy Walker and Harry James and his orchestra in a terrific number, 'The Three B's.'

June's big break came the following year with Two Girls and a Sailor (1944). When June was initially cast as the 'pretty sister,' her Meet the People (1944) costar Dick Powell counseled June that she should ask to play the 'plain sister' instead. While a bit of a blow to June's ego, Powell's instincts were correct, as June's raspy voice and wholesome looks and demeanor were just right for the part; she became one of MGM's big stars. Until the late '50s she enjoyed a career as America's sweetheart, everyone's ideal girlfriend or wife.

Allyson married Powell in 1945, a generally happy marriage which surmounted a couple of challenging periods, lasting until Powell's untimely death from cancer in 1963. The Powells had two children, Pamela and Richard. After Powell's passing June endured some difficult years, including an unhappy subsequent marriage and a period of alcoholism, before ultimately finding health and happiness with David Ashrow, a dentist, in 1976.

Below is a selection of eight favorite Allyson films which combine to provide a good overview of her career.

Two Girls and a Sailor (1944) - June and her Best Foot Forward costar Gloria DeHaven are delightful as the two sisters, with the title sailor played by Van Johnson. June and Van were such a successful pairing that they were teamed in four more films over the next decade. Viewers will be humming 'Sweet and Lovely' for days after watching this one!

The Secret Heart (1946) - This film was a change of pace for June, playing Penny, a neurotic young girl who idealizes her dead father. She's also a bit resentful of the stepmother (Claudette Colbert) who raised her and paid off her father's debts. Matters become more complicated when Penny falls for a man (Walter Pidgeon) who should be a father figure to her, especially as he wants to marry her stepmother. It's a tough part, especially as Penny can be quite unlikable at times, but Allyson sells the role and the viewer is relieved to see her happy in the final scenes. It's an added plus that Allyson looks especially lovely in this black and white film.

Good News (1947) - June stars as the college campus librarian who tutors football star Peter Lawford in this colorful, joyous film; one of my favorite MGM musicals. June memorably sings 'The Best Things in Life Are Free' and duets 'The French Lesson' with Lawford; legend has it that Lawford taught his 'French tutor' June French pronunciation for the song. Directed by Charles Walters, this film's reputation as delightful entertainment has only grown with the passage of time as more film fans discover it.

The Three Musketeers (1948) - America's sweetheart might have been a touch out of place as Constance in the famous Dumas tale, but June was at her most beautiful in this Technicolor adventure. Her tragic romance with Gene Kelly's D'Artagnan made quite an impression on me as a young filmgoer falling in love with classic-era films, and I recall it fondly for that reason.

Little Women (1949) - The 1934 Katharine Hepburn version might be the best filming of the Alcott story, but MGM's Technicolor film version will always have a special place in my heart. June is a spirited Jo, while another of her regular '40s costars, Peter Lawford, plays Laurie. The cast also includes Janet Leigh, Margaret O'Brien, and Elizabeth Taylor as Meg, Beth, and Amy, with Mary Astor as Marmee. As a child I anxiously awaited this film's appearance on TV at Christmas; what joy that it's now on DVD.

The Reformer and the Redhead (1950) - This is just a lightweight bit of fluff but I include it as it's fun to see Allyson on screen with husband Dick Powell the same year they appeared together in Right Cross (1950). Allyson is a zookeeper's daughter who seeks the help of a mayoral candidate (Powell) when her father (Cecil Kellaway) is fired. Powell constantly wears an 'Isn't she cute?' expression which one suspects wasn't acting. June plays a talkative, spunky gal who surprises Powell when she suggests they skip over a few days and kiss immediately in order to see if they have chemistry. (One guess at the answer.)

The Girl in White (1952) - Underrated and interesting June stars as a pioneering woman doctor, Emily Dunning, in this fact-based story about the first female medical intern at a New York hospital. She does a fine job as an intelligent and determined woman who won't let naysayers stand in her way. It's a low-key, natural film which avoids cliches; Gary Merrill, as a dubious hospital head, makes a character who could have been a villain multidimensional.

The Glenn Miller Story (1953) - Another childhood favorite, it's the second of three films in which June played James Stewart's wife, following The Stratton Story (1949). They're a beautiful pair in this music-filled film which gave me a lifelong love of the big band sound. The next year Stewart and Allyson were teamed again in another wonderful film, Strategic Air Command (1954).