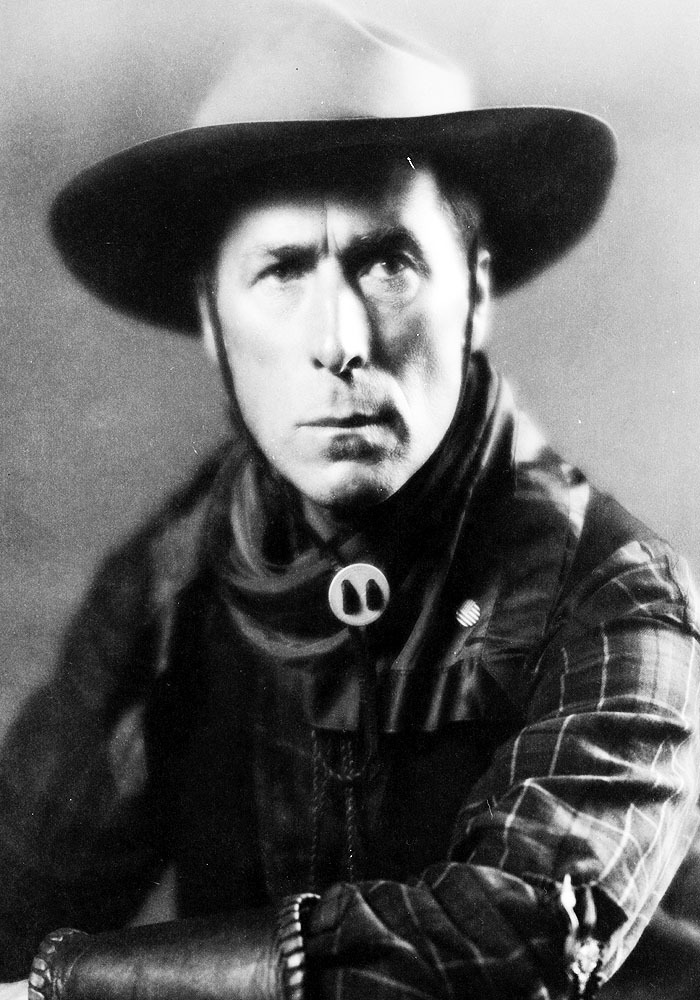 The Old Corral: The Birth of the Western Movie

Many people regardThe Great Train Robbery (1903) as the first Western movie. It isn't, though. Cowboys had been captured on celluloid before and short Western scenes were quite common. As early as 1894 Buffalo Bill Cody's troupe had been filmed and there was already a motion picture, Lasso Thrower viewed by a single person in a kind of what-the-butler-saw device. In 1896 motion pictures were first commercially projected onto large screens in the US.

In 1898 there was Cripple Creek Bar-Room Scene and the following year Poker at Dawson City. Earlier in the same year as The Great Train Robbery, Biograph released A Bucking Broncho, with the camera panning with the horse's movements, and when the bronc backs up suddenly, the audience must have thought it would end up in their laps. A more ambitious attempt than these vignettes came in the summer of 1903 when Biograph produced the 21-minute Kit Carson, eleven fictional scenes of the life of the great pioneer, including a violent scalping. Western thrills had come to the masses.

So, no, The Great Train Robbery was not the first Western movie. But when it was released at the end of 1903 the Western as we know it was effectively born. Suddenly there was a dramatically creative story film constructing an illusion of reality -- the magic at the heart of the whole motion picture industry. It told a story visually and established the crime-pursuit-showdown element that became standard to the Western, with gunplay and galloping. There was even a comic scene of cowboys shooting at the feet of a tenderfoot in a saloon to make him dance.

Said tenderfoot was Maxwell Henry Aronson, soon to become Gilbert M. Anderson, more famously known as Broncho Billy. (He played a bandit and the train passenger who is shot as well.) It was his first Western of over 300 in a career that lasted till an entertaining performance at the age of 85 in The Bounty Killer. In 1904 he was in another Edison/Edwin S. Porter film, Western Stage Coach Hold Up. Four years after The Great Train Robbery Aronson founded the film company Essanay with George Spoor (the name comes from their initials, S&A) and in hundreds of shorts he became, in effect, the first cowboy star. He went on to write, direct and produce Westerns too and was presented with an honorary Oscar in 1957. Aronson died in 1971 at the age of ninety.

It is easy for us sophisticated movie-goers to mock The Great Train Robbery and think it crude - it seems prehistoric. The substitution of a dummy for the trainman thrown from the train, for example, is laughably bad to us now, and the flimsy stage set of the station seems to come from some amateur theatrical production. But we should remember that many who saw it had never seen a motion picture before. It must have been amazing to be transported into an imaginary world which seemed so real. The final (inspired) scene of Justus D. Barnes firing his pistol into the camera -- and thus, it appeared, directly into the audience -- is said to have caused people to faint.

There was no cinema as an art form. It was a technical advance. Thomas Edison, a difficult man to get on with, was no artist and distrusted those who were. No one (yet) had pretensions of creating a beautiful or 'literary' motion picture. They were too busy photographing a scene as realistically as they could.

In 1899 Edwin Stanton Porter joined the Edison Manufacturing Company. He rapidly took charge of motion picture production at Edison's New York studios, operating the camera, directing the actors, and assembling the final print. During the next decade Porter became the most influential film maker in the United States. He was an innovator. For instance, he invented the dissolve: instead of using abrupt splices or cuts between shots Porter gradually transitioned from one image to another, helping audiences follow complex movement. He has never been thought of as a founding father of film in the way D.W. Griffith or Thomas H Ince are.

Though uncredited, Porter directed and wrote The Great Train Robbery and with Blair Smith did much of the cinematography and editing (still in its infancy). It was a very personal creation. Taking a story so well-known from dime novels and stage melodramas (such as Scott Marble's The Great Train Robbery of 1896) is an inspired move.

The one-reel film, with a runtime of only twelve minutes, was put together in twenty separate shots, so well done that intertitle cards were not needed. The film cuts freely from interiors to exteriors with a narrative flow. It is one of the earliest to use the technique of cross cutting, in which two scenes are shown occurring simultaneously, but in different locations. The camera is placed on the rear of the tender for a long and smoothly executed panning shot as the bandits escape into the woods which was a revelation in 1903 and is still a fun watch today. It lasted for years and was shown all over the country.

Another point worth recalling is the Wild West was so recent at that time. Westerns weren't history; they were current events. Figures like Wyatt Earp and Bat Masterson were still alive. Billy the Kid and Jesse James had been killed twenty-odd years before -- no different than the 1990s to us today. Horses, guns and Western clothes were common. In March 1903, six months before The Great Train Robbery came out, Kid Curry of The Wild Bunch died in an attempt to rob a train.

And these early Western movies were steeped in a tradition that went back to the dime novels, stage melodramas and Wild West shows. At the turn of the century Wild West shows were at the height of their popularity (in fact, the new movie Westerns contributed to their rapid decline). These were examples of popular culture that started when the West was still 'wild.' Figures such as Buffalo Bill and Calamity Jane had lurid (and entirely fictional) adventures recounted in the cheapest of booklets and novels that sold in huge numbers. Cody appeared on the stage in sold-out melodramas that it's no wonder the early Western movies were a hit.

The Great Train Robbery was a commercial success on a scale never before seen. It was this as much as any of its artistic innovations that made it the progenitor of the genre. Edison and his competitors exploited it for all it was worth, rapidly producing a series of Westerns such as The Great Bank Robbery, The Bold Bank Robbery, The Hold-Up of the Rocky Mountain Express, and so on. There was even Edison's The Little Bank Robbery (1906) in which children took the parts and the bandits stole toys and candy.

In 1904 the Lubin company made a scene-by-scene copy of The Great Train Robbery and released it with the same title -- copyright laws were laxer then. It reminds me of the spaghetti western boom of the 1960s: a couple of commercially successful movies are followed by a whole glut of knock-off imitations until there seemed to be nothing in Italian cinemas but westerns. By 1908 the genre was so well established that distributors' catalogues listed releases under Drama, Comic andWestern.

Just as the spaghetti Westerns soon exhausted themselves, by 1914 reviewers were complaining that the genre was a tiresome cliche, old hat, a thing of the past. The critics were wrong. Cecil B. DeMille directed the first movie version of The Virginian that year. William S Hart was just hitting his stride. Tom Mix was ridin' the range. Shorts were becoming feature films. People packed the nickelodeons to see them. The celluloid West was just beginning.

The movie industry itself moved West. The Great Train Robbery and its imitators had filmed in New Jersey, but soon Tulsa, San Antonio, Prescott, Las Vegas, and Los Angeles became the centers of the industry. Westerns as subject matter seemed natural and logical.

And just as real Western lawmen and outlaws cashed in on their former glories by appearing in Wild West shows, they 'advised' on or appeared in Western movies. Wyatt Earp wanted Hart to make a film of his life. Al Jennings starred in four Westerns between 1914 and 1920.

The Great Train Robbery is the first great milestone in the history of the Western. In only ten years Western films were made which vastly surpassed The Great Train Robbery in sophistication and appeal. D.W. Griffith began producing and directing Westerns in 1908. His Ramona in 1910 had impact (and was often remade). In 1913 his The Battle of Elderbush Gulch was a 29-minute thriller which became a sensation, and established many scenes that became standard in the genre. In 1915 he produced Martyrs of the Alamo, directed by Christy Cabanne, still immensely watchable. And the following year Douglas Fairbanks was The Half-Breed.

Between 1911 and 1923 Thomas H. Ince produced over 150 Westerns. Ince thoroughly planned out shooting schedules and used several assistant directors, notably Francis Ford (John's brother). In California Ince built a series of sets known as Inceville and Westerns became an assembly line affair. Some of his pictures were massive endeavors, such as The Battle of Gettysburg (1913). In 1915 Ince and Griffith joined forces and dominated the Western, especially once Ince started working with William S. Hart, the leading Western star. Movies such as Hell's Hinges in 1916 showed how far the Western had come since The Great Train Robbery.

Young John Ford made Westerns for Universal, then Fox, several with Harry Carey, and many very sophisticated and subtle -- like Straight Shooting in 1917, which is Ford's first feature and his first complete surviving film.

In the 1920s the Western gained a new dimension when the epic was launched. Paramount's The Covered Wagon in 1923, directed by James Cruze, was followed by Fox's The Iron Horse in 1924, with Ford as director. These pictures told of great nation-building events of the West. The Iron Horse ran for an astonishing 150 minutes. Expensive location shooting and vast casts were employed. The Western had come of age.

Some of these early silent Westerns don't make easy viewing today. But many do, and apart from their historical interest, they stand up as good Western movies to our modern over-sophisticated eyes. The genre has had its ups and downs but it plugs obstinately on, more than a century after The Great Train Robbery. Cool movie makers like the Coen brothers and Quentin Tarantino make Westerns.

Movies and TV shows like The Revenant and The Hateful Eight in 2015 or The Magnificent Seven andWestworld in 2016 have been box-office successes. Made-for-TV and straight-to-video Westerns are still coming out in considerable numbers. They owe much to Porter, Griffith, Ince, Hart and the others -- when Hollywood was still young and the West was still wild.