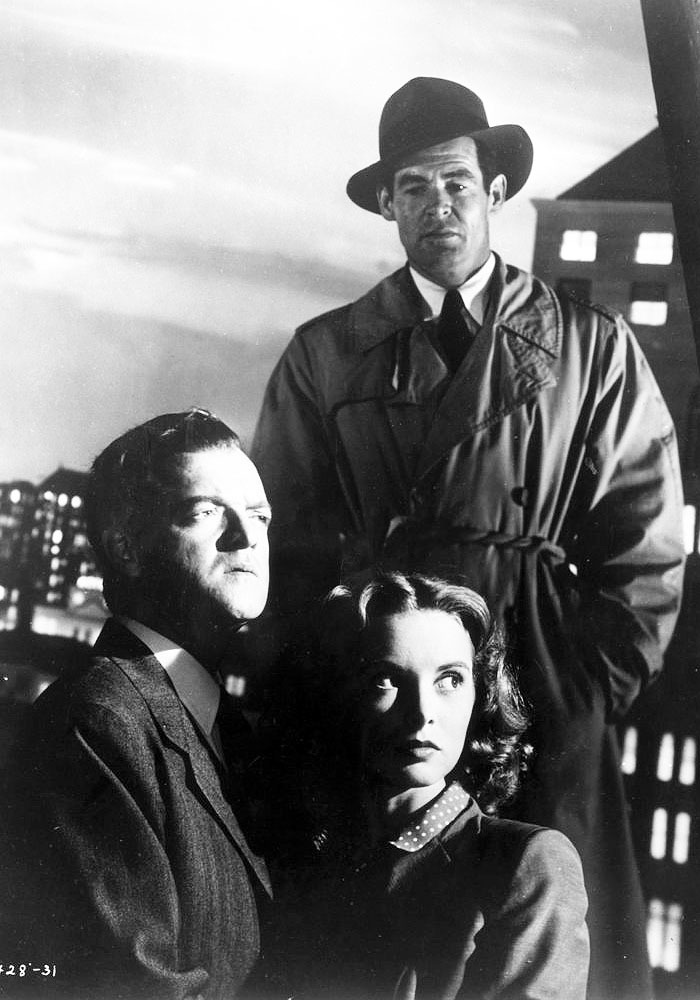 In the world of film noir, 1947 is commonly touted as a banner year -- it's the year that saw the release of such classics as Out of the Past, Kiss of Death, Nightmare Alley, and Dead Reckoning. For my money, though, there's another year that deserves just as much acclaim, 1948. Today's post shines the spotlight on five first-rate features from this stellar year of noir.

Van Heflin stars as Frank Enley, a successful businessman with a wife and young son, whose harmonious existence is shattered when he discovers he is being stalked by an ex-war buddy, Joe Parkson (Robert Ryan). Although Enley elicits the viewer's compassion, it is eventually revealed he was what Parkson termed a 'stool pigeon for the Nazis' during his term in a wartime prison camp. In fact, as it turns out, Enley's betrayal of his fellow prisoners not only resulted in a crippling injury for Parkson, but also the deaths of most of the men in the camp. Other characters in the film include Enley's loyal wife (Janet Leigh), who is horrified to learn of her husband's atrocities; Parkson's girlfriend, Ann (Phyllis Thaxter), who fails to dissuade Parkson from seeking revenge; and local barfly Pat (Mary Astor), who knows a 'private policeman' who can help Enley escape his stalker, permanently.

Janet Leigh and Mary Astor appeared together the following year in Little Women (1949).

Cry of the City

Gritty and fast-paced, Cry of the City focuses on a melange of distinctive characters, including Martin Rome (Richard Conte), a small-time hood who has recently added the murder of a cop to his long list of misdeeds; Teena (Debra Paget), Rome's unflaggingly steadfast girlfriend; Niles (Berry Kroeger), an unscrupulous attorney who tries to pay Rome to take the rap for a jewel theft he didn't commit; Rose Given (Hope Emerson), a local masseuse with a lethal technique; and Lt. Vittorio Candella (Victor Mature), a detective determined to bring Rome to justice.

'They'll make a Robin Hood out of a cheap hoodlum like that. The longer he's loose, the bigger hero he is.' -- Victor Mature

Cry of the City was Debra Paget's screen debut. She went on to appear in featured roles in two additional noirs: House of Strangers (1949) and 14 Hours (1951).

Kiss the Blood Off My Hands

Set in post-WWII London, Kiss the Blood Off My Hands stars Burt Lancaster as Bill Saunders, a luckless drifter whose existence continues to spiral downward when he accidentally kills a bartender in a local pub. After seeking sanctuary in the apartment of a young woman, Jane Wharton (Joan Fontaine), Bill begins to turn his life around. Bound by their mutual loneliness, Bill and Jane grow closer over time, but Bill's bliss is shattered when he is blackmailed by a pub patron who knows of the circumstances surrounding the bartender's death.

'The aftermath of war is rubble -- the rubble of cities and of men . . . .The cities can be rebuilt, but the wounds of men, whether of the mind or of the body, heal slowly.' -- Narrator

Kiss the Blood Off My Hands was the first feature produced by Hecht-Norma Productions, the production company created by Burt Lancaster and his agent, Harold Hecht. (The 'Norma' in the company's name was in honor of Lancaster's then-wife, Norma Anderson.)

Pitfall's central figure is insurance agent Johnny Forbes (Dick Powell), a family man whose humdrum life gets an unexpected jolt when he meets a beautiful blonde, Mona Stevens (Lizabeth Scott). Planning only to retrieve stolen items Mona received from her embezzler boyfriend (Byron Barr); Johnny falls for her instead, becoming ensnared in a web of lies at home, and running afoul of both Mona's boyfriend and Mack MacDonald (Raymond Burr), a psychotic private detective whose obsession with Mona leads to murder.

'She probably doesn't appeal to you, but for me, she's just what I told the doctor to order.' -- Raymond Burr

The film was directed by Andre DeToth, the second husband of diminutive actress Veronica Lake. The two were married for eight years.

They Live By Night

Vaguely reminiscent of the story of Bonnie and Clyde, They Live By Night focuses on star-crossed lovers Keechie Mobley (Cathy O'Donnell) and Arthur 'Bowie' Bowers (Farley Granger). Bowie, an impressionable young convict, has recently escaped from prison along with two hardened comrades, Chickamaw (Howard DaSilva) and T-Dub (Jay C. Flippen). Hiding out at the home of Chickamaw's brother, Mobley, Bowie meets and falls for Mobley's daughter, Keechie, with whom he shares his plans to seek a pardon and change the course of his life. Like the best laid plans of mice and men, though, Bowie's upstanding intentions are derailed when Chickamaw and T-Dub force him into joining in just one more heist.

If you haven't checked out these first-rate 1948 noirs, you're in for a treat! (And if you've seen them, do yourself a favor and indulge in some re-watching!)