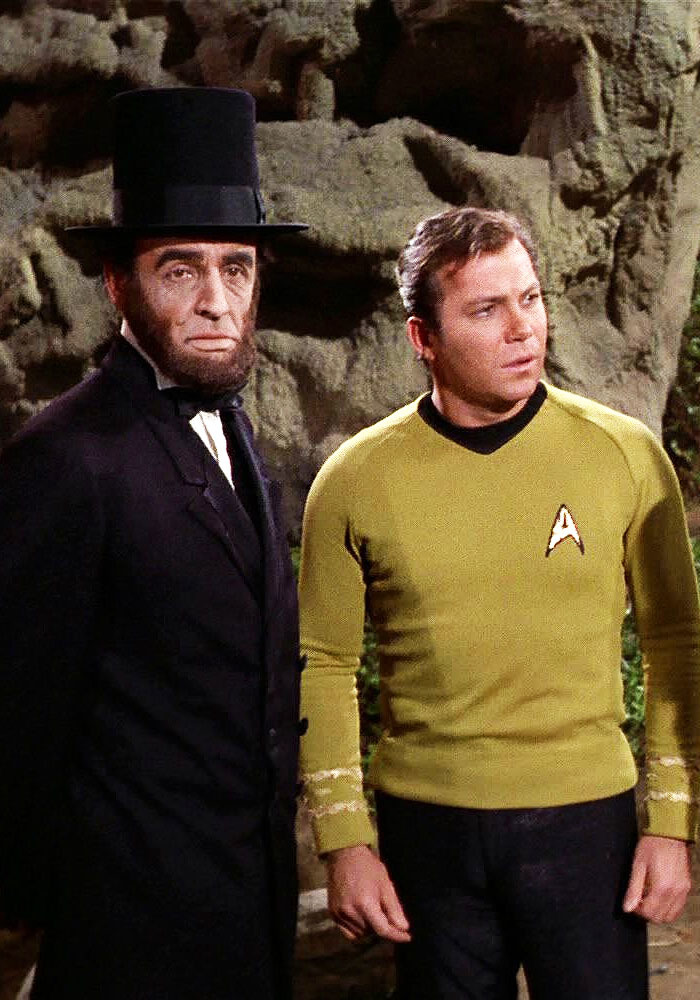 Trivia lovers often point out the eerie similarities between two acclaimed United States presidents who were both struck down by assassins. While an amusing number of coincidences do indeed connect Abraham Lincoln and John F. Kennedy, there is at least one huge difference: While Honest Abe is all over classic TV, it's hard to find JFK.

We all have a vague collective false memory of Kennedy guesting on The Dick Van Dyke Show, but alas, it never happened. For a man reputed to have such a command of the medium, he sure didn't make the rounds much. As for Lincoln, well, for someone considered shy and often melancholy, he didn't turn down many offers.

This month let's take a look at our 16th president's work in several of the most popular sci-fi/fantasy series of the era. (As always, spoilers are ahead. If you have been waiting to see how the Civil War turned out, you may want to come back later.)

Scholars have long pondered tantalizing hypothetical scenarios associated with Abraham Lincoln. What if he survived that fatal shot from John Wilkes Booth? What if he lost the election of 1960? What if he were part of a makeshift team fighting random villains on a remote planet for the amusement of a reptilian-looking rock creature?

Star Trek addresses that last question with season 3's 'The Savage Curtain.' The Enterprise is summoned by the visage of President Lincoln himself, who shows up on the main screen in an appropriately majestic chair and requests to board the ship. Kirk's officers are split on whether to beam him up -- Scotty and McCoy are particularly wary of encouraging what they see as a nut or a hoaxer -- but no one actually thinks it is the real Lincoln.

Kirk is curious, though, and orders a full official welcome for their guest. You know what that means -- time to put on the fancy shirts. There is a nice scene in which the officers' puff out their chests in their ceremonial tunics as Lincoln appears in the transporter room. Just before the arrival, Kirk tells Spock to play the fanfare with 'appropriate ruffles and flourishes,' which is easily the best order he ever gave on the Enterprise.

Lincoln is fascinated to hear music without a band, and Kirk explains the wonder of taped music. (Not every Trek concept was centuries ahead of its time.) I think the music impresses Abe more than the transporter. The captain shows his guest the bridge, where he causes a potential awkward moment by referring to Uhura as 'a charming negress,' but she quickly reassures him that, 'In our century, we've learned not to fear words.'

We eventually discover the inhabitants of the planet Exclabia created 'Lincoln' to lure Kirk into a showdown against other beings as part of an experiment to determine the relative merits of good and evil. You know the old saying: Never meet your heroes because they're bound to be apparitions who draw you into a life-or-death struggle on an alien planet.

The aliens used Lincoln's image because he was one of James T. Kirk's personal heroes (I'm glad they didn't pick Warren Beatty), and for Spock's benefit they recreate Surak, the 'greatest of all who ever lived on our planet,' according to the science officer. This impromptu fantastic four is forced, under threat of the destruction of the Enterprise, to battle Genghis Khan; 'Colonel Green,' a genocidal 21st-century warmonger; Zora, some kind of mad scientist; and a Klingon tyrant known as Kahless the Unforgettable. I wish I had a great nickname like that (as long as it's not Rick the Unreadable)!

In the initial brawl, Lincoln acquits himself well, drawing on his wrestling background. Later he shows his tactical mind, displays selfless courage, and points out war is brutal and that, in so many words, to make an omelet one has to break a few eggs. This Lincoln is charming, soft-spoken, and clearly impressed with Kirk, who he compares favorably with Ulysses S. Grant.

Spock ultimately notes that the Exclabians created Lincoln from Kirk's own thoughts, so how could he be anything less than the captain's idealized expectations? Indeed, as portrayed by Lee Bergere, this version of Lincoln is everything WE would desire: noble, wise and with decidedly modern attitudes towards social conditions. Something about him seems a little off, though, as if he were maybe a little too gentle.

In an early Time Tunnel episode, 'The Death Trap,' Ford Rainey gives my favorite TV Lincoln performance. He's sensible and plain-spoken, but he also projects authority. Those are all good qualities considering the assassination plot in which time travelers Tony and Doug become embroiled. Unfortunately, this Lincoln is irritated to be delayed on his train trip through Baltimore to D.C., asking Alan Pinkerton (in charge of the security detail) if it's more 'rumors and innuendo' causing all the precautions. It's not his most prophetic moment. He also declares there won't be a war between sister states, but you can't blame a guy for being helpful.

In fact, there is a genuine conspiracy in progress. The tunnel spits Tony and Doug out in Baltimore in 1861, right into a meeting of radical abolitionists determined to blow up the train carrying the President so that the North blames the South and starts war. The tunnel also shows the team at headquarters a vision of Lincoln at Ford's Theatre in 1865, causing confusion for everyone. What's the use of creating a time-travel machine if you can't control it? Clearly those pikers at Project Tic-Toc didn't know what they were doing.

Tony and Doug are separated when Pinkerton and his men bust up the meeting, and Doug becomes Pinkerton's captive while Tony is held by lead conspirator Jeremiah (Scott Marlowe) and his brother Matthew (Tom Skerritt). Tony tries to talk some sense into the radicals, but the only flexibility Jeremiah displays is deciding to use his crude time bomb to blow up the depot instead of the train when Pinkerton convinces Lincoln to stop the procession. Actually, the bomb does look simple, but a time bomb is pretty sophisticated stuff for 1861. Maybe the guys should bring Jeremiah back to Project Tic-Toc to help with that balky time tunnel?

At the depot, Doug gets to warn the man himself. This Lincoln is calm and projects a bemused dignity, but it's surprising how open he is to Doug's ideas. I mean, Pinkerton has called this stranger a menace and tied him up, but Lincoln seemingly intuits the deal and says, 'Tell me your version of the future.' I know if I were the prez, I'd lock this person up and throw away the key...right after I issued an executive order mandating the DVD release of the rest of I'm Dickens, He's Fenster.

I mentioned Abraham Lincoln appeared in many anthology series in the early days of television, and he soon found his way into one of the most famous. Two score and sixteen years ago, President Abraham Lincoln (Austin Green) entered The Twilight Zone in season 3's 'The Passersby.' One might expect a shocking twist of some kind, like some twisted alternate reality in which, it is revealed, Abe wears not a stovepipe hat, but a propeller beanie.

The 'twist' isn't a surprise, though, and the chief executive doesn't even appear until the end. The real star of the episode is James Gregory. As soon as you see his name attached to 'The Passersby,' you just know that, prez or no prez, nobody is stealing this one from Gregory.

The feeling is reinforced at the beginning as Gregory limps towards a house. Soon we hear him talk and discover he has a Southern accent. Later, he strums his guitar and sings an old folk song. Tell me what kind of chance any mere thespian has of standing out against that combination of gimmicks? Lincoln, Teddy Roosevelt, and The Lone Ranger could all show up in the final segment and not upstage James Gregory.

As a nameless Confederate sergeant walking down a long road along with many other wounded veterans in the aftermath of the Civil War, he stops at the battle-scarred house of widow Lavinia Godwin (Joanne Linville), who is bitter and vengeful toward the Union soldiers who took her husband. She pleads with the sarge to stay, bur he is compelled to see what's down the road, and he thinks she should move on and join him.

Suddenly her late hubby Jud approaches from the same road, singing the same tune Gregory was (yeah, but does he have a limp and a guitar?), and he tells Lavinia he is dead...but so is she! She refuses to believe it, yelling, crying, and begging Jud to stick around. I would have reacted the same way had I been around when they canceled My Living Doll.

Eventually one final passerby heads past the house, and it's Abe Lincoln himself! His presence convinces Lavinia that her husband was correct, so she chases after Jud. The show ends with Lincoln, who says he was the last one on the road, symbolically ending the parade of war casualties.

Of the three episodes examined here, this one does the least with Abraham Lincoln in terms of screen time, yet it utilizes Lincoln's image most strongly. This incarnation is calm and peaceful, though mortally wounded, but he doesn't need to be animated given the powerful combination of Rod Serling's concise narration and the dramatic shot of the beloved president on the foggy road to no visible destination.

Abraham Lincoln's pivotal presence in these series indicates an untapped potential. Hollywood could have called on Abe for all kinds of shows. I think he would have been great as a visiting country lawyer on Perry Mason or The Defenders. Unfortunately, we must settle for his fine work in these programs of the 1950s and 1960s, which is more than enough to elevate him on my ranking of the presidents. After all, Jack Kennedy was never in the Twilight Zone.