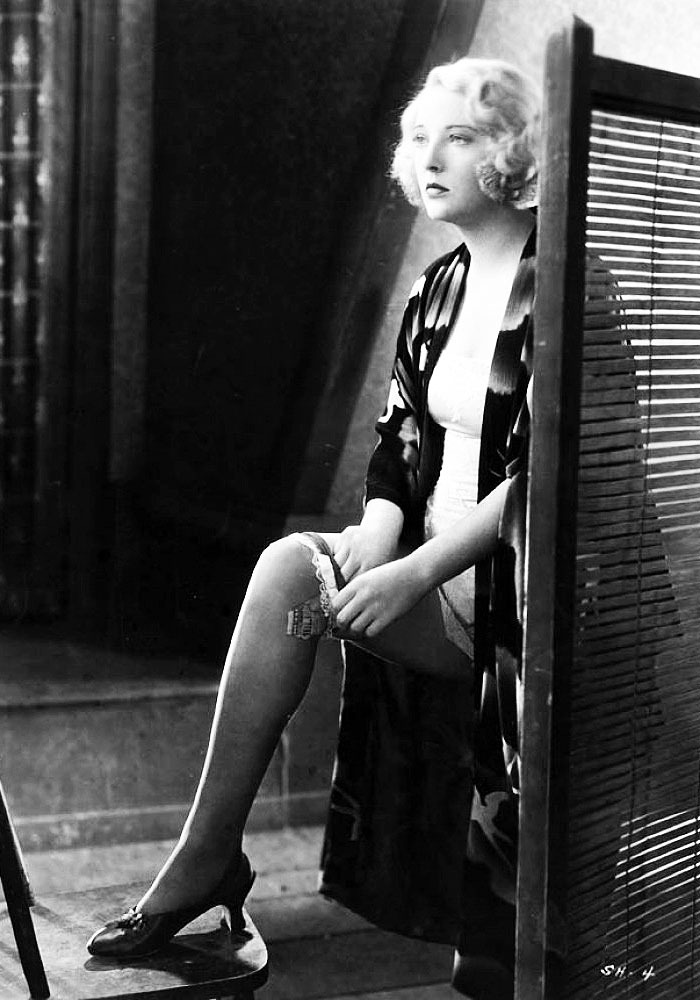 The opening of Safe in Hell is a bit deceptive. The film's title appears on-screen, with its block-style, capital letters filled in with a silent roar of angry flames. Meanwhile, the music we hear conjures a scene from the late 1800s, perhaps a pair of ladies strolling through the park with ankle-length dresses and lace-trimmed parasols. But once the credits fade the tune changes to 'St. Louis Blues,' and if you don't know what that means, you find out as soon as you see a shapely pair of gams belonging to a scantily clad blonde.

That blonde is Dorothy Mackaill.

Born in Yorkshire, England, in 1903, Mackaill was bitten by the acting bug at an early age; while still in her teens, she ran away to London, persuading her father to finance her housing and lessons. By 1920, she'd landed a role in her screen debut, The Face at the Window, starring C. Aubrey Smith. She later made her way to New York, working as a Ziegfeld girl and appearing in comedy shorts on the big screen.

Hollywood came calling before long and she was hired by Associated First National Films; her first film for the studio was Bits of Life (1921) with Lon Chaney, which depicted four unrelated stories shot with different casts. Mackaill later said she never met Chaney on the set, as they appeared in different segments, but she performed with him a few years later in The Next Corner (1924) and by 1926, she was starring in such features as Subway Sadie, in which she portrayed the title role.

During the late 1920s and early 1930s, Mackaill's star continued to rise, and she shared the screen with such luminaries as Richard Barthelmess, Myrna Loy, Warner Baxter, Basil Rathbone, Lewis Stone, and Joel McCrea (whom she dated a few years before he met and married Francis Dee). By the time she made Safe in Hell in 1931, Mackaill was appearing in an average of five films a year.

Filming began on Safe in Hell in September 1931 and finished just a month later. It was originally to be directed by Roy Del Ruth, and then Michael Curtiz, but wound up being helmed by William Wellman; among those initially considered for the cast were Boris Karloff, David Manners, Lillian Bond, and Barbara Stanwyck. In fact, Stanwyck was given the starring role and had actually started to attend rehearsals but, ultimately, due to a contractual agreement with Columbia Studios, she was forced to bow out and the part went to Mackaill.

Co-starring Donald Cook, Ralf Harolde, Nina Mae McKinney, and Clarence Muse, Safe in Hell focuses on Mackaill's character, Gilda Carlson, a fascinating female who is tough but vulnerable, sweet but practical, courageous, loyal, and smart. When we first meet her, she's getting a call from her madam to meet a client. 'I'll go right into my dance,' Gilda responds matter-of-factly. We don't get the impression that she's wholly enamored with her line of work -- it's simply a necessary evil she's accepted. It's her tough side that's on full display when she learns she's been personally requested by none other than Piet Van Saal (Ralf Harolde), a former employer whose unwanted attentions eventually led to her current career.

When she encounters Piet, Gilda doesn't break down in tears, or recoil in fear or disgust. No, Gilda's mad, plain mad -- which is manifested both verbally and physically; she not only smacks Piet's hand away when he touches her face, she also knocks a drink out of his hand ('Hey! That costs ten a quart,' he complains), and heaves a champagne bottle at him. Unfortunately for Gilda, after he's conked in the head with the bottle, Piet falls unconscious to the floor. She flees the apartment, unaware that she has left a fire in her wake -- and that a bellboy witnessed her visit. Serendipity steps in at this point, in the form of Gilda's fiance, Carl (Donald Cook), who helps Gilda escape to the island of Tortuga, where extradition laws are non-existent.

Once she's firmly ensconced in the island's only hotel, Gilda encounters a motley crew of criminals, from pickpockets to cold-hearted murderers, each of whom is fascinated with the island's only white woman. After vehemently rebuffing each man in his turn, Gilda ultimately earns their respect -- with the exception of the island's jailer-executioner (Morgan Wallace), who is determined to possess her, no matter what.

Although one can certainly envision Barbara Stanwyck in the part of Gilda -- she was a master at portraying the tough gal with a heart of gold -- Mackaill does a fine job in the role, believable in the scenes where she resorts to physical violence, as well as those in which she's overcome by helpless tears. Slightly less effective is Donald Cook as the love of Gilda's life -- to call him somewhat wooden is putting it mildly; it's not entirely clear how a woman like Gilda would give him a second look, let alone go to the lengths she ultimately goes for him. (He's only in a few scenes so he doesn't do much harm.)

The cast is spot-on -- Ralf Harolde, as usual, is suitably creepy; Nina Mae McKinney and Clarence Muse bring a marked dignity to their roles of the hotel's manager and porter; and each of the hotel residents manages to be at once unsettling and endearing.

Carrying the warning that it was 'Not for Children,' Safe in Hell garnered mixed reviews upon release. The critic for Time magazine called it 'crude, trite [and] sporadically exciting,' while the review in the Pittsburgh Post-Gazette claimed Mackaill was 'too good for the likes of her role.' The New York Times critic, however, judged that the 'fugitive murderers and swindlers are a rather amusing lot,' and noted that a moviegoer seated near him 'wept piteously' at the film's end.

Safe in Hell proved to be the high point of Mackaill's career -- she was only seen in a handful of films during the next few years; the actress claimed she left the screen to be with her second husband, singer Neil Miller, whom she'd married shortly after shooting wrapped on Safe in Hell. Three years later, when the couple divorced, Mackaill admitted that her husband objected to her screen work. Her final feature film was Bulldog Drummond at Bay (1937) with John Lodge and Victor Jory.

In the 1950s, she moved to Hawaii, taking up permanent residence at the Royal Hawaiian Hotel in Waikiki -- she later made two appearances on the long-running television series Hawaii Five-O, which starred her friend Jack Lord. Her 1980 role on the show would be her last performance. Mackaill died a decade later, at the age of 87, in Hawaii, which she once described as a place where the 'Aloha spirit . . . is very much alive.'