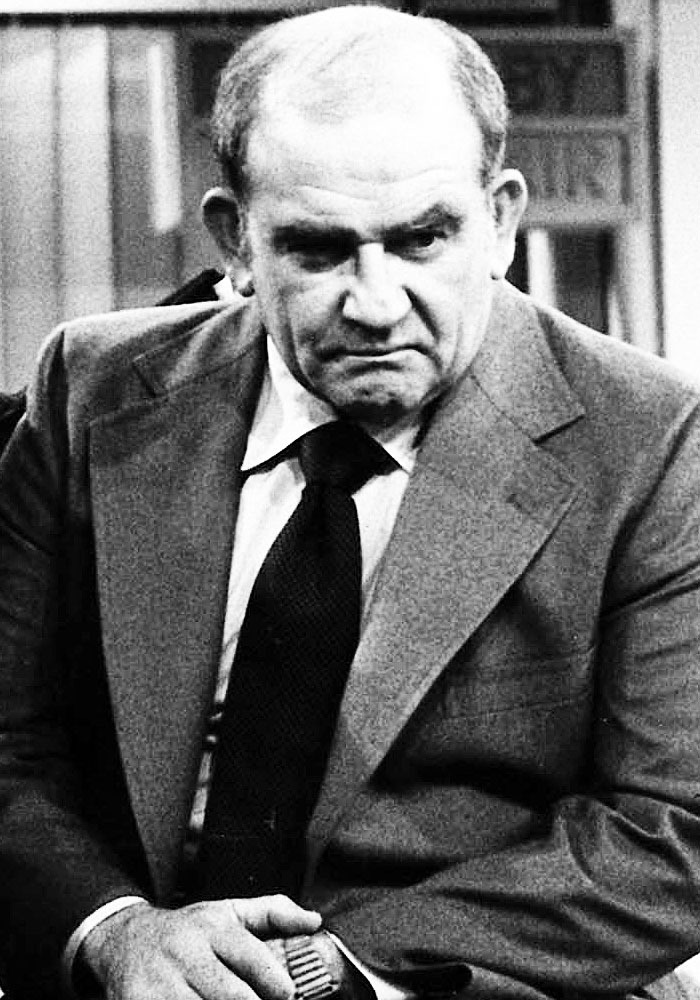 Long before he became America's unofficial grandfather by playing lovable if gruff characters like Carl Fredricksen in Up and Santa himself in Elf, Ed Asner had a long and storied television career. Prior to his breakthrough role of grizzled newsman Lou Grant, Asner guested in a wide variety of series in the 1960s, often playing characters that were nasty, mean, or downright evil. Let's go back to the days when this legendary performer had more hair on his head, more letters in his name (he was often billed as Edward Asner), and maybe more deviousness in his soul.

One of Asner's best guest shots is as the heinous Furman Crotty in The Wild Wild West's, 'Night of the Amnesiac.' Artemis Gordon refers to him as 'The Grand Caliph of Kansas Crime,' which may be a cooler handle than 'Furman Crotty.' In an episode with a lot going on -- Jim West gets amnesia, a desperately needed smallpox vaccine is held for ransom, one of my favorite character actors (George Petrie) makes an appearance -- Asner stands out and he does so by fitting in; by embracing the spirit of the series, he creates an engaging performance.

It's easy to believe Asner enjoys playing the bad guy because we see how much Crotty relishes being the bad guy. He's full of one-liners and cocky smiles. When Artemis Gordon asks where his partner Jim West is, Crotty, about to light up a cigar, casually replies, 'Why don't you consult an Ouija board?' Oh, and by the way, Crotty is a federal prisoner during this conversation, which makes his attitude even more remarkable. His control of the vaccine -- and West -- as he knows, gives him leverage to get his release. He tells Gordon he'd like to help find the medicine, but he can't since he's imprisoned. 'However,' he adds, 'I'm certain you can locate it easily enough.' After a pause he adds, 'Just follow the buzzards.' Crotty chews on his stogie and grins as a dramatic musical sting reinforces the notion that he is an evil dude.

Crotty has plenty of classic moments; the way he sneers at the masses and mocks the thought of people dying without the crucial smallpox vaccine. The glee with which he reveals his heinous plan to West and Gordon is also a delight.

I could fill an entire column with Crotty quotes. 'Every time I have to kill someone who's family, I get depressed,' he says before chomping into an apple. Later, confronting the two agents, he declares, 'Welcome to Crotty's Genocide Club -- the only truly liberal establishment of its kind. We'll kill anyone -- no questions asked.' The fact that he says this wearing a cowboy hat and a smug smirk makes it better.

The only disappointment in this episode is the climactic fight scene, in which Asner's stunt double manages one impressive sledgehammer swing before being dispatched by a falling curtain. It's an ignominious downfall for such a charismatic foe, and someone with a name as cool as 'Furman Crotty' deserves a more dynamic end.

Asner is no less devious but more subdued as an alien leader in The Invaders', 'Wall of Crystal'. Here, Tagus' soft-spoken nature enhances his sinister leanings. The actor trades the amped-up nature of his Wild Wild West role for a different kind of evil. Tagus (nowhere near as memorable as 'Furman Crotty,' is it?) is the kind of baddie who speaks clearly but slowly. He smiles with a fake warmth and keeps his hands folded in front of him. His calm persona suit's the series' moody atmosphere.

Crotty relishes being evil, but Taugus relishes control. It's a kick to see his interactions with Vincent when he has all the leverage in the form of his captured brother. As Crotty, Asner uses broad gestures, but in The Invaders, when David demands proof his brother is OK before accepting Taugus' demands, the alien pauses, gives a slow smile, and licks his lips. He never raises his voice, but he projects total confidence throughout the scene. Asner is an essential component of a strong, tense Invaders outing.

Asner played many foreign agents in the 1960s, often of indiscriminate 'There's a Cold War and you know who we really mean even if we don't name a country' origin and was surprisingly effective with an Eastern European name and sometimes an accent. Hey, it's better than his casting as 'Pablo Vasquez' in a 1965 episode of Burke's Law.

In the classic Mission Impossible, 'The Mind of Stefan Miklos,' Asner is restrained as Simpson, a foreign agent working in the states. I won't even begin to summarize the plot of this episode because it's one of those, 'We need to make him think we are trying to make him think we don't know that what he thinks is wrong' deals, but Ed is effective in a smaller part as a man who calls out a comrade, a traitor (to the Americans) named Townsend, as a traitor to HIS country. In contrast to the other roles we've discussed, Simpson is not a vision of self-assurance, but more of a weasel.

My favorite moment of the episode is when Martin Landau's Rollin Hand enters Simpson's glassware shop in the guise of brilliant Stefan Miklos, who has been dispatched by the foreign power to ascertain the truth. The two have never met in person. As Simpson pours a drink, he says, 'You took me by--' And Hand/'Miklos' finishes his sentence: 'Surprise?' Ooh, that brilliant bit of brainpower surely establishes he's really Miklos. I expected the next exchange to go something like, 'Would you like a cup of--' 'Coffee?' 'Man, it's like he's reading my mind!'

An even finer Cold War villain role is Premier Alexei Brynov in 'The Exile,' a season 1 episode of Voyage to the Bottom of the Sea. At the beginning, a sneering Brynov faces a firing squad in a country referred to later as 'The People's Republic.' His last words: 'Today, my comrades kill me. Tomorrow, I kill them!' Somewhere, watching bootleg ABC transmissions in Russia, a young Yakov Smirnoff's comic worldview was established.

Brynov further establishes his persona by spitting at one of his captors when asked if he wants a blindfold. After his crew frees him in a daring rescue, we see him sniping at them in their hideout. He even lowers his own brother to his knees with a devastating standing wristlock.

Because Brynov claims to have explosive microfilms that could instigate world war, the United States wants to deal with him, and the government sends Admiral Nelson (Richard Basehart) to Brynov's yacht to check things out. However, there is a traitor aboard whose sabotage leads to the destruction of the boat and the survivors cling to a raft for survival. There is little footage aboard the Seaview in this episode, though the sub tries to locate Nelson and vice versa, but it's a fun story because of the showdown between the paranoid Brynov and the upright admiral.

Asner goes with a full-on accent here, but his ferocity and the character's focus on his own survival prevents the performance from lapsing into parody. He deals with his own inner circle with various methods before a final confrontation with his American foe, with both men weak, thirsty, and desperate. We learn early on that Brynov is ruthless, and Asner brings him alive with vivid enthusiasm.

Sometimes it doesn't take a diabolical plot to make an effective TV heel. Take the Dr. Kildare, 'Tightrope into Nowhere' (they really don't make episode titles like they used to, do they?), with Asner in a prominent guest spot as Dr. Frank Williams. This doc's bedside manner leaves much to be desired. When a man falls into a coma, Williams gives up on the whole deal and doesn't hide his contempt when Kildare leaves hope alive for the victim's daughter.

'Why don't you make her face it, Kildare?' he says. Deciding that isn't cruel enough, he faces her directly: 'Miss Logan, nothing will save him. His body is ravaged by disease, his brain tissue is destroyed -- he is a dead man.' At this point, I wanted Janet Logan, played by Mary Murphy, to respond, 'So you're saying there's still a chance!'

Instead, she protests, causing Williams to glare and say, 'You know what? You've got spunk, Mary. I hate spunk!' (Sorry, you knew it was coming eventually.) Actually, Williams gets a big dressing-down from Dr. Gillespie, but not before his downer of a doc enlivens this episode. Asner delivers just about every line in a flat monotone that underscores the disdain his character has for 'hopeless cases.' It's a stark contrast to the idealistic James Kildare.

Out of all of Asner's characters' misdeeds in the 1960s, one thing he does in an episode of Route 66 remains the most shocking. In 'The Opponent,' Asner is Scully, the sardonic trainer of Johnny Copa, a punch-drunk fighter played by Darren McGavin with a bulbous prosthetic nose. The boys take a side trip to Youngstown, Ohio, to see Copa fight, and Buz talks up his childhood friend like he were a combination of Mike Tyson, Sugar Ray Robinson, and Curly Howard after he hears 'Pop Goes the Weasel.'

Scully and Buz don't get along at all, with the former's wise-acre repartee making a bad impression on the lads. Eventually Buz reveals that he bet money on Copa to win the fight, at which point Scully does the unthinkable: He giggles.

I never saw Lou Grant or even Santa Claus giggle. Roar, maybe; bellow, sure. Giggle, though? It's a stunning moment that looms over the rest of the episode, even when the screenplay has the trainer reveal a backstory and explain why he has such a hard shell. That giggle is the one false note in an otherwise moving episode. Minutes later, Scully brings things back into focus by announcing, 'I'm going to get a steak.' Now, there's an activity that fits Ed Asner.

These are all different series with distinctive parts, and the actor delivers each time. Even within the realm of playing bad guys, Ed Asner shows impressive range in his 1960s guest appearances, portraying cartoonish criminal masterminds, creepy aliens, and flawed human beings who just rub people the wrong way. The star continues to do memorable work today, but it's well worth taking a trip through television history to see his earlier characters.