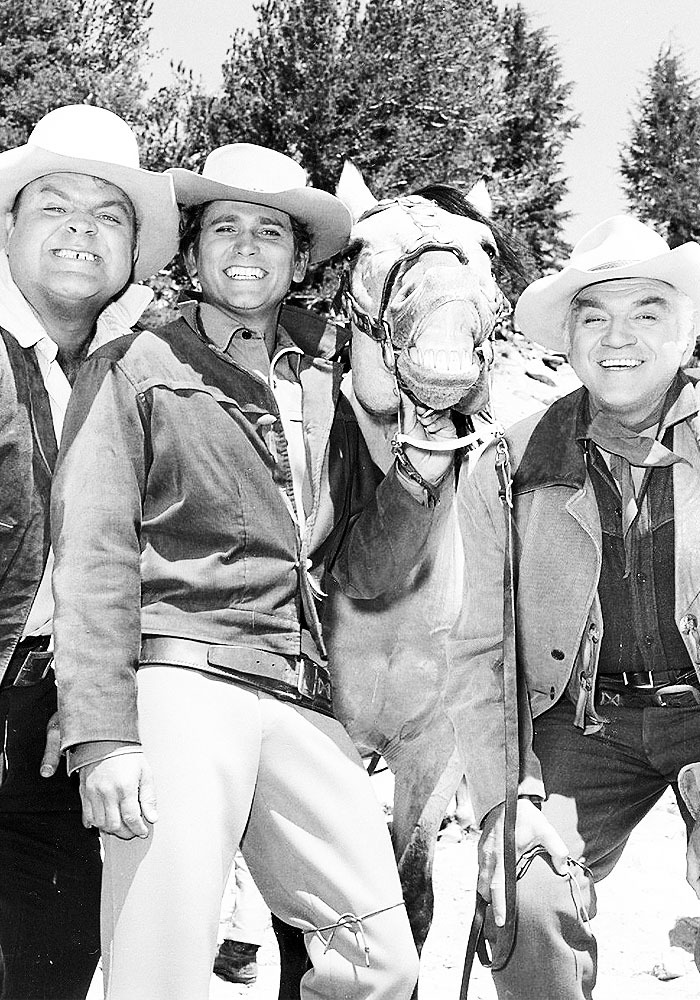 TV TIME: Get in the Ring for Classic TV Mania

Each year the extravaganza known as WrestleMania revives the old myth that Vince McMahon "invented" sports entertainment by taking "rasslin'" out of dingy, dark, smoke-filled dives and making a family-friendly product suitable for large "respectable" arenas. In reality, professional wrestling did just fine as a regional, territorial product for years. It had a national presence, as well, and while McMahon did expand his business by seizing on cable television's reach, arena grappling was a fixture of the early days of the medium.

Not only was wrestling a popular live event on the networks, it was a reliable plot device on fictional TV shows. Sometimes it was just background as characters watched it on their own sets, but many times, the stories took us into the ring. Let's examine some of these early examples of how TV handled pro wrestling.

The Flintstones, Ventriloquist Barney: One of the fundamental traditional precepts of wrestling is that promotions try to influence fans who cheer a babyface (or "good guy") to overcome the skulduggery of the heel ("bad guy") in order to win. This episode presents one of the great heels in cartoon history: Barney Rubble.

The wrestling episode is the same one in which Barney learns ventriloquism. He never gets in the ring, but the fact that he practices the craft for no reason other than to mess with people makes him a pretty effective heel. Before we even get to the Bedrock Arena, Barney annoys Betty and Wilma, then tricks Fred into thinking Pebbles can talk.

While I would love to see a ventriloquism gimmick in wrestling (there have been ventriloquist dummies used as props), that's not the case in this episode. The wrestling is a backdrop for another Fred/Barney quarrel, as Barney apologizes for his shenanigans by offering tickets to the night's big wrestling card. After first protesting that the arena is no place for a girl, Fred decides to show what a progressive male he is by taking his infant daughter out to the match.

They arrive in time for the main event, pitting the Masked Marauder against Bronto Crushrock. I'm disappointed by the lack of creativity in the animation. I can understand why a live-action TV show wouldn't rent a sports arena and fill it with hundreds of costly extras, but "Ventriloquist Barney" shows a limited view of the ring and focuses on one audience shot, only a quarter of the building and only partly lit, at that.

The wrestling action features the two combatants flying into each other, but the match has a controversial finish when Pebbles walks into the ring and stands tall (well, as tall as an infant can) over the two brutes, somehow being declared champion. That's more believable than the time David Arquette won the WCW World Championship.on TBS. (Look it up...or better yet, don't.)

The Munsters, Herman the Great: When Herman Munster twists a piece of steel in front of Eddie's friend, the boy tells his father, wrestling promoter Duke Ramsey, who sees dollar signs. "We'll have the greatest gimmick in wrestling since the Swedish Angel." It just so happens Herman is getting anxious about Eddie's college fund, so he agrees to begin a graps career, though he becomes the Masked Marvel to avoid embarrassing his friends and family. Even in the 1960s, being a monster was less socially acceptable than being involved in wrestling.

This solid episode features a lot of wrestling in a fairly credible setting, with an interesting twist on fixed match outcomes. Herman throws all of his matches, not because Ramsey or someone else tells him to, but because his opponents feed him sob stories about needing the winner's purse. Later, Ramsey squeezes some more money out of the winless Masked Marvel by offering $50 a minute to any amateur who can stay in the ring.

A ringer, a pro named Strangler, enters the contest, but that isn't enough. No, his crooked manager spikes Herman's water with sleeping pills. Though pretty much everyone knew that, yes, wrestling wasn't "on the level" even back then, most television shows dance around that idea, hinting at shady dealings in the business but not coming out and saying the matches were predetermined. Yet indicating a successful wrestler wins by drugging his opponents is apparently more respectable somehow!

After yelling, "It's a frame-up," to no avail, Grandpa counters the trickery with a magical spell of his own, enabling Herman to defeat the Strangler. Real-life personalities like Count Billy Varga (who plays Strangler) and legendary ring announcer Jimmy Lennon make this an interesting glimpse into the world of 1960s pro wrestling, although I wouldn't use the word "realistic" to describe a match in which an old man stands up, shouts a strange incantation, and a giant in a hood throws his opponent so hard the ring breaks. (Actually, I think I have seen all of those things happen in actual pro wrestling matches.)

The Abbott and Costello Show, Wrestling Match: Lou Costello and Stinky (Joe Besser) engage in a brawl at the beginning of the episode, so Mike the Cop suggests they settle their differences by competing in a pro-style match at the upcoming policeman's benefit. What an excellent job of community policing Mike does, seeing two citizens slugging it out on the street and proposing they end it with wrestling. This approach should be used everywhere. "Hey, guys, instead of firing bullets fighting for this corner, why not have a 6-man tag team match in a steel cage at the amphitheater this Saturday?"

Much of the episode involves Lou and Bud trying to finagle a free meal, and it's a reminder that with so many of their routines involving various forms of small-time hoodwinking, these guys should be naturals for the squared circle. It takes a while to get the big event, but when it arrives, it's worth the wait. Costello's attempt to get an edge by plying his opponent with 25 malteds before the match backfires when Stinky is replaced by his brother, Ivan the Terrible. Who would you rather fight, a guy named Stinky or a guy named Ivan the Terrible?

The two have an entertaining match. In TV depictions of wrestling, the most common strategies are generic bear hugs and variations of holds designed to make it look like someone is being "twisted into a pretzel." Lou's stunt double flies around, and we see some body slams, mare throws, and even illegal maneuvers like Ivan using the ropes to choke Costello.

You can't have a truly great match without a decisive finish, and though Lou knocks out Ivan, the fact that Bud accidentally knocks out Lou immediately afterwards (payback for getting less than 50% in the act for so long?) makes it look like there's no real winner. I almost expected Pebbles Flintstone to walk into the ring and declare herself the new Police Athletic League champ.

The Adventures of Superman, No Holds Barred: The grittier atmosphere of the first season of this series is well suited to encounters with street-level crime, but in episodes like this, I sometimes look at the Man of Steel and think, "Shouldn't you be going after Lex Luthor or Brainiac or something?" The Daily Planet and Supes get involved in exposing a sinister wrestling manager because The Planet is an activist newspaper and because Superman, well, has nothing better to do, apparently.

There is a serious element to this: Bad Luck Brannigan, the protege of oily Mortimer Murray, puts a string of opponents in critical condition with his array of nerve holds taught to him by an Indian swami who Murray is blackmailing into working for him. In the actual comic books of the 1950s, it wouldn't be a surprise to see Superman somehow get into the ring himself, but in this case he is mostly absent until cleanup duty at the end, as Clark Kent trains an amateur wrestler backed by the Planet to conquer Brannigan.

"No Holds Barred" may tell us more about the Planet than about wrestling. My favorite scene comes when Clark reminds Perry White that a big match is about to come on television. It's 10:00 on a Friday night, and the two of them are just hanging around Perry's office with no particular purpose. I can't tell if this show has a complete dedication to monitoring the pulse of Metropolis or a total lack of direction in the Planet's editorial side.

Perhaps counter-intuitively, a show about a costumed superhero offers maybe the most realistic depiction of professional wrestling in classic TV, partly due to the skillful integration of footage from actual matches into the storyline. Then again, maybe a show about a costumed superhero is exactly the kind of program one would expect to handle pro wrestling effectively!

Bonanza, Old Sheba: I have mentioned before that I didn't watch Bonanza growing up and even though the reruns have played forever, I never had a firm grasp on the beloved long-running Western. So it came as a pleasant surprise to learn that not only did the series have a wrestling episode, but it starred William Demarest as a shady promoter named Angus Tweedy.

Unfortunately, the actual wrestling content is sparse, and the titular Old Sheba is not some kind of femme fatale evil manager, but an old elephant Hoss and Little Joe receive from shady circus impresario Tweedy. My enjoyment of the episode was limited by my disappointment that it didn't build up to Hoss wrestling the elephant.

We do at least get to see Adam Cartwright's exasperated reactions to the fact that his boys brought home the animal (I think at one point I heard him refer to Sheba as "that bag of pachyderm") and a money-crazed Little Joe talking big about striking it rich by managing Hoss in his grappling career. The sports footage is minimal and it takes place in a circle on the ground inside a circus tent. Some rudimentary action culminates in Little Joe using a bear hug maneuver to incapacitate Tweedy's champion (Bearcat Simpson) in a $1,000 challenge -- only the shrewd carnie says the time limit expired.

Then Hoss agrees to take over for the injured Bearcat when Tweedy gives the Cartwright boys a sob story about how his outfit is struggling. So Hoss tours with them, taking on opponents, and the Episode of Missed Opportunities does not give us a montage of Dan Blocker stomping a mud hole in a bunch of rubes; rather, it gives us Tweedy ripping him off by giving him Sheba in lieu of winnings or any kind of wages.

It's a humorous episode, but not one with a lot of insight into the world of professional wrestling. It's worth the watch for Demarest, who belongs on the list of top 10 character actors who should have been in wrestling. A heel manager named Angus Tweedy bringing opponents in to face Bruno Sammartino each month at the old Madison Square Garden would have been money. I really wanted to see Hoss Cartwright vs. Old Sheba, but Adam Cartwright's Patience versus Angus Tweedy's Guile is a nice consolation prize.