It's been nearly a year since Olive released their last feature as part of their Criterion-esque Signature series but they have announced the next two titles, both starring Cary Grant: the 1959 military comedy Operation Petticoat and 1964's Father Goose.

Both were originally released by Olive but will be receiving new 4K restorations. Bonus features to the DVD and Blu-Ray are below. Each Blu will retail for $39.95.

Father Goose and Operation Petticoat will be available on November 7th. 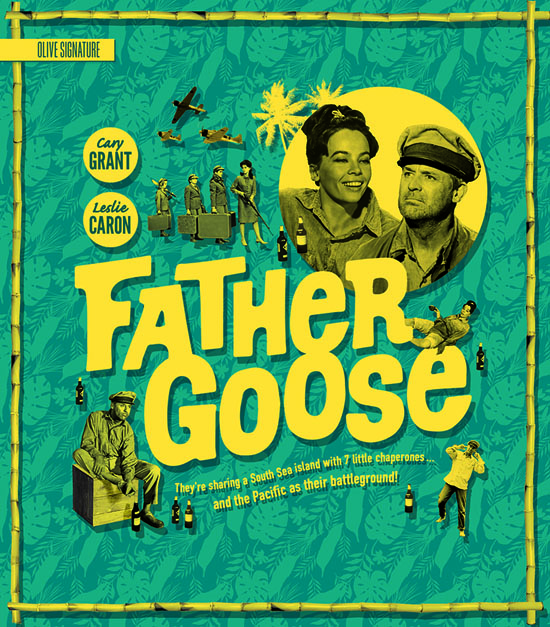 In what would be his second-to-last film appearance, screen legend Cary Grant is paired with the enchanting Leslie Caron in Father Goose, and the battle of the sexes has never been as funny or as romantic.

When boozy beachcomber Walter Eckland (Grant) is blackmailed into service as a lookout by the Allied Forces during World War II, little does he realize that his idyllic island getaway will soon become a haven for seven schoolgirls and their prim and proper teacher. Rescued by Eckland from a nearby island following an enemy attack, Catherine Freneau (Caron) and her seven mischievous charges will turn the life of the grumpy, whiskey-soaked Eckland on its ear. Adding to the fun is Trevor Howard as Commander Frank Houghton, the proverbial thorn in Eckland’s side.

Father Goose, directed by Ralph Nelson from an Academy Award winning screenplay by Peter Stone and Frank Tarloff based on a story by S.H. Barnett, was photographed by Academy Award winner Charles Lang Jr. and features a score by Cy Coleman, which includes the Father Goose theme song, “Pass Me By.” 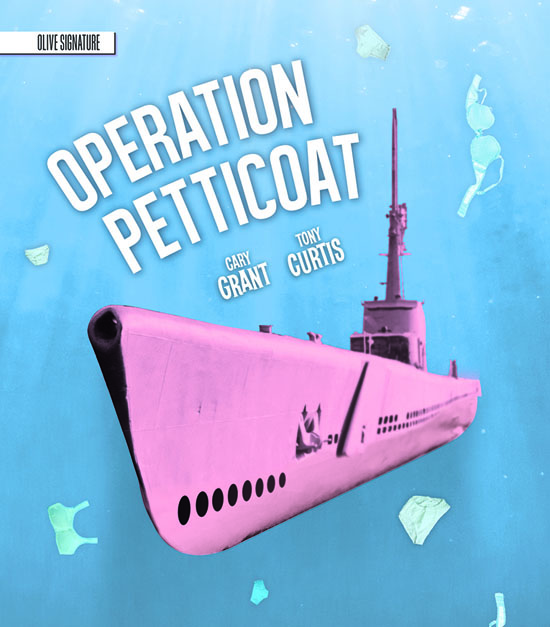 Cary Grant and Tony Curtis, two of cinema’s most celebrated stars, provide the comedic pivot point in director Blake Edwards’ Operation Petticoat. It’s hijinks on the high seas when revered Lt. Cmdr. Matt T. Sherman (Grant) and the somewhat unethical Lt. JG Nicholas Holden (Curtis) team to upright the USS Sea Tiger, a flagging submarine that’s seen better days. With some dubious maneuvering (and scavenged parts), things begin to look up for the old war horse until the ship and its crew are forced out to sea by a surprise attack. Limping along and barely held together with its borrowed parts, the Sea Tiger gets some unexpected company when five stranded Army nurses are brought aboard. The game gals will prove that necessity is indeed the mother of invention, initiating a series of renovations to make life aboard the Sea Tiger livable — with the exception of the sub’s accidental pink paint job. Not only is the ship now an eyesore, but a target for both the Japanese and American forces.

Adding to the fun, both fore and aft, are a talented cast of supporting players that include Joan O’Brien, Dina Merrill, Gene Evans, Dick Sargent, Arthur O’Connell, Gavin MacLeod, Madlyn Rhue and Marion Ross. Operation Petticoat’s Academy Award nominated screenplay was written for the screen by Stanley Shapiro and Maurice Richlin (suggested by a story by Paul King and Joseph Stone) and photographed by the great Russell Harlan.