CLASSICFLIX NOIR: Ruth Roman in Down 3 Dark Streets, 5 Steps to Danger in April

Ruth Roman stars in two 1950s film noir's coming from ClassicFlix on April 24th on both Blu-ray and DVD.

Restored from the original camera negative and presented in 1.85:1 original aspect ratio, Five Steps to Danger (1957) finds Roman on the run in a bit of noir-style, Cold War intrigue with noir favorite Sterling Hayden. First time on any home video format.

In Down Three Dark Streets (1954), Roman co-stars with Broderick Crawford and is supported by Martha Hyer and Marisa Pavan, among others, in this gripping and taut police procedural. First time on Blu-ray for Streets as well as its first time in its original aspect ratio of 1.75:1. 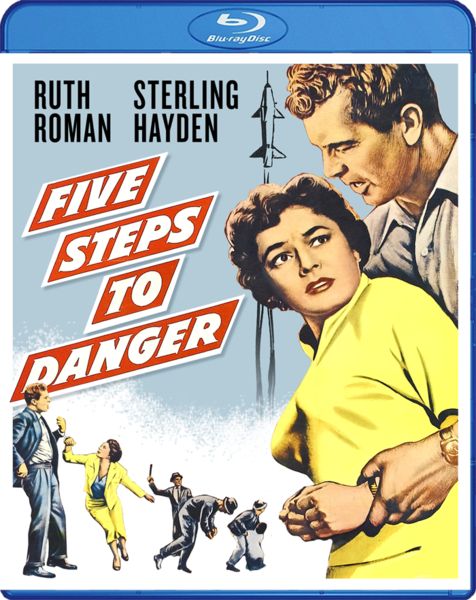 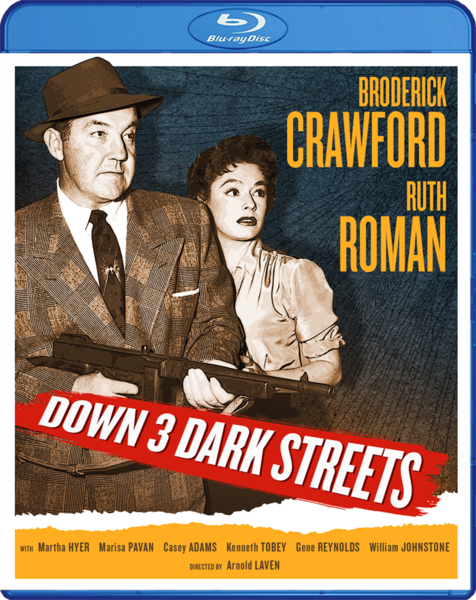 Restored from the original camera negative and presented in 1.85:1 original aspect ratio.

Stranded in a small California town after experiencing car trouble, vacationing John Emmett is spared the tedium of bus travel when he has a chance meeting with Ann Nicholson—who offers him a lift if he'll agree to split the driving duties to Santa Fe. He soon learns that Ann is actually a patient recovering from a nervous breakdown, however, and a simple little road trip blossoms into a Cold War nightmare as the couple are ensnared in a web of mystery involving vital national security secrets!

Based on Donald Hamilton's "The Steel Mirror" (serialized in The Saturday Evening Post in 1948), 5 Steps to Danger stars film noir icon Sterling Hayden (The Asphalt Jungle) as a Hitchcockian hero innocently up to his neck in intrigue and danger. Ruth Roman, no stranger to noir films herself (The Window), is Hayden's love interest: a woman whose suspicious background makes her someone difficult to trust.

Directed by Henry Kessler, Danger also features several familiar classic TV faces among its supporting cast: Werner Klemperer, a two-time Emmy winner as Colonel Klink on Hogan's Heroes, portrays a psychiatrist, and daytime drama doyenne Jeanne Cooper (The Young and the Restless) is Roman's concerned nurse. Stir in uncredited contributions from Sidney Clute (Cagney & Lacey) and Ken Curtis (Gunsmoke), and you have in 5 Steps a Danger a crackling good suspense thriller that will keep you guessing to the very end!

When FBI agent Zack Stewart is gunned down in the line of duty, supervisor John "Rip" Ripley (Broderick Crawford) takes over his caseload. Believing that one of Stewart’s three active investigations will reveal the identity of his killer, agent Ripley’s assignment takes him “Down Three Dark Streets”:  chasing down fugitive criminal Joe Walpo (Joe Bassett), breaking down small-time hood Vince Angelino (Gene Reynolds), and hunting down an unknown extortionist threatening helpless Kate Martell (Ruth Roman)—ending with a thrilling climax set against the backdrop of the iconic "Hollywood" sign!

With a supporting cast that includes Martha Hyer, Casey Adams, Jay Adler, Claude Akins and William Johnstone, Down Three Dark Streets was directed by Arnold Laven (Without Warning!) and produced by Jules V. Levy and Arthur Gardner.  The trio would enjoy much success in television as the creative team behind such hits as The Rifleman and The Big Valley.

Oscar-winning cinematographer Joseph F. Biroc (The Towering Inferno) adds the right noir flavor to the tight screenplay by Bernard C. Schoenfeld and The Gordons. Gordon and Mildred Gordon (who wrote the book on which Streets is based, Case File: FBI) would later supply screenplays for such classic films as Experiment in Terror and That Darn Cat!